SELF‑MEDICATION AMONG UNDERGRADUATE MEDICAL STUDENTS IN TWO UNIVERSITIES IN SYRIA

SELF‑MEDICATION AMONG UNDERGRADUATE MEDICAL STUDENTS IN TWO UNIVERSITIES IN SYRIA

INTRODUCTION: As per the World Health Organization ‘‘Self-medication is the selection and use of medicines by individuals to treat self-recognized illnesses or symptoms 1, 2. People recently accepted more personal responsibility for their health status 3.

Medicines for self-medication are often called ‘non-prescription’ or ‘over the counter’ (OTC) and are available without a doctor’s prescription through pharmacies 4. While self-medication can produce good results and be a convenient practice for the patient, it can also cause serious health risks such as bacterial resistance, dependence, di­gestive bleeding, hypersensitivity reactions, drug withdra­wal symptoms 2, 5, 6.  In addition to these risks, it should be emphasized that the momentary relief of symptoms may actually mask the underlying disease and could make it worse 3, 5, 6, 7, 8, 9. Studies performed on self-medication reveal that it is a fairly common practice, especially in economically deprived communities, but its ratio is also high in developed countries although strict regulations prevent it in those countries 4. Past studies revealed that the prevalence of self‑medication among university students was (43.2%) in Ethiopia 10, (78.6%) in South India 11, (79.9%) in Serbia 12, (84%) in Nebal 13, (97.8%) in Kuwait 14 and (50.2%) in Iran 15.

This practice is influenced by many factors, such as education, family, society, law, availability of drugs and exposure to advertisements 9. A high level of education and professional status has been mentioned as predictive factors for self-medication 17, 18, 19. The reasons for self-medication mentioned in the literature are mild illness, previous experience of treating similar illness, economic considerations 10, 11, 12, 13, 14, 15.

The study of self-medication practice among university medical undergraduates is very important as they are a segment of the population that is highly educated and with access to information regarding their health. Looking at this practice among medical undergraduates is also very vital as they represent the future generation of drug prescribers and health team worker 16, 17, 18.

However, to our best knowledge, no such study examining the self‑medication among university students has been performed in Syria. The objective of our study is to estimate the prevalence of self‑medication, determine the main symptoms driving self‑medication and the most commonly used nonprescription medications among medical students of Aleppo and Al-Andalus universities.

MATERIAL AND METHODS: This was a survey-based study in which a pre-validated questionnaire. Study population consisted of medical college students of Aleppo and Al-Andalus universities. Students were explained about the nature and purpose of the study and necessary consent obtained. Any event of use of OTC or prescription medicines without consulting a doctor was considered as self-medication. The questionnaire consisted of 4 sections. The first section contained questions regarding demographic information such as, sex, type of college, and study year. In addition, participants were asked whether they have practiced self-medication in the past year. The second section of the questionnaire consisted of questions related to the therapeutic classes that respondents reported using in self-medication practices. Respondents were presented with a list of therapeutic classes from which to choose. The third section of the questionnaire focused on the health conditions that respondents would self-treat. In the fourth section of the questionnaire, respondents were asked to select and state the reason(s) for practicing self-medication. The fourth part also contained questions regarding who recommended the self-treatment of the respondent.

Statistical Analysis: The data were coded, entered, and analyzed using the statistical package for social sciences program (SPSS) version 18. Descriptive results were expressed as frequency, percentage, Chi-square statistical analysis was used to test for significant associations between each variable and the self-medication practice. 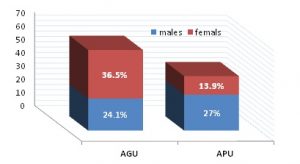 The remaining respondents preferred consulting a doctor by going to a private clinic. A significant difference between two universities students was found Using Chi-square test, regarding prevalence of self-medication (P=0.001). 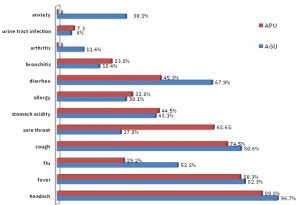 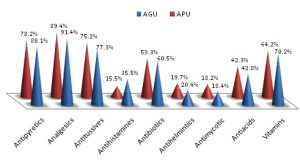 A significant difference between two universities students was found regarding reasons for self-medication (P=0.016).

DISCUSSION: Throughout the world, people desire to take responsibility for their own health care management. Many do so via self-medication tend which is now increasingly being considered as a component of self-care 9.

WHO is promoting practice of self-medication for effective and quick relief of symptoms without Medical consultations and reduce burden on health care services, which are often understaffed and inaccessible in rural and remote areas 6.

This descriptive, quantitative study believed to be the first of its kind conducted in Syria, focused on the practice and attitudes of undergraduate medical students and identified the main source of drugs and reasons for self-medication. These students may differ from the general population because they are exposed to knowledge about diseases and drugs.

The self-medication rate reported in this study among AGU and APU students (60.5% and 40.9%) was comparable to previous studies. The prevalence of self-medication among the medical students was shown to be ranging between (43.2% and 97%) 10, 11, 12, 13, 14, 15. The difference of rates between two universities was statistically significant (P=0.001).

Previous experience and mild illness were the main reason for practicing self-medication. The same reasons were also reported in previous studies 10, 11, 19. This has an important connotation as different diseases may have similar symptoms, and a person using previous experience may be exposed to the dangers of misdiagnosis and consequently wrong treatment.

Only 39.5% of AGU students seek for physician consulting probably due to as 23.1% of AGU respondents choose a cost effective answer to explain self-medication practice compared with 15.3% of APU respondents (P=0.016). One of the most common reasons reported previously for indulging in self-medication includes high cost of private doctor's consultations 8.

The observation of current study is accordance with the Association of European Self Medication Industry which has enlisted pain, allergy, colds, sore throat, cough and diarrhea as common diseases for preferring self-medication 21. Analgesics and antipyretics were the most commonly reported therapeutic class consumed through self-medication. Similar results were found by other researchers in other countries 10, 13, 18, 22. Analgesics and antipyretics in most times are not very toxic and do not represent a great risk to health.  Therefore, these medications are always kept at home within the reach of the person 23. However, improper use of these drugs may mask the true symptom or cause of the symptom, making it difficult to diagnose and even aggravating the underlying disease 6, 7, 9.

Similar finding was reported in Nepal 13 and Kuwait 14. Pharmacists may have an important role to play in helping people seeking self-medication 14. People who practice self-medication may not be adequately knowledgeable to judge, for example, the choice or a dose of the drug or how long the treatment should continue. The pharmacist can play a key role in helping people to make informed choices about self‑medication and in providing and interpreting the information available 27.

In addition to community pharmacies, other identified bases for drugs choosing used by the respondents for self-medication were previous doctor prescription, my own experience and Opinion of friends. These other bases for choosing drugs, apart from pharmacists, could also pose serious risks to the consumer’s health. However, in another study in Ethiopia textbooks were reported as the most common source of information 24.

This survey included medical students from only two universities which limits its generalizability and further research is required to get the views of medical students in Syria. As with all self-administered questionnaire based studies, there is the possibility that participants may under-report undesirable behaviors and underestimate their actual use of some medications so that the answers reported by the respondents cannot be actually validated.

CONCLUSION: This descriptive study has shown that a significant number of medical students practiced self-medication facilitated by the easy availability of drugs. Therefore, strong policies should be applied prohibiting the supply of medicines without a valid prescription. Potential problems of self-medication should be emphasized to the students. Education on irrational use of drug should be advocated. It might be helpful if the concepts and principles of self-medication could be reflected in the formal curricula of health care disciplines. At the same time, it is crucial to emphasize the role of the pharmacist in patient education regarding practicing self-medication and as an important source for drug information.

CONFLICT OF INTEREST STATEMENT: The authors declare that there are no conflicts of interest.

ACKNOWLEDGMENTS: The authors are grateful to the study participants who voluntarily took part in the study. Additionally, the authors would like to express deep appreciation for pharmacy students at AGU (Bayan Mslaty, Rima Barakat, Haya Nakami, Muhammed Kassara, Nour A. Alrahaman, A. Alrahman Tattan) and APU (Khawla Sakkour, Mai Alhaj, Batoul Dib) for helping with data collection and entry.