INTRODUCTION: Nanotubes have received considerable attention because of their remarkable properties leading to diverse applications in many years 1-3. Interest in the self-assembled nanotubes for technological applications is due to the tunability of their properties from changes in the several variables like pore size, different areas for contact (inner and outer surfaces) and that they present multiple sites for functionalization and molecular recognition 4, 5.

Hecht and coworkers have categorized nanotubular structures into several groups. Among them self-assembly of small organic, lipidic, peptidic and hybrid motifs to form nanotubes with well defined shapes and dimensions have been studied by many groups6 including our laboratory 7.

MATERIALS AND METHODS: The target compounds, N, N’-diacyl-2, 6-diaminopyridines A, B and C were readily synthesized by acylation of 2, 6-diaminopyridine (DAP) with the correspoinding acyl chloride using a synthetic route shown in Figure 1. The structures of the target compounds were confirmed by spectroscopic methods and elemental analysis (see the experiment section). The self-assembly of  A, B and C was carried out in methanol by dissolving 1 mg of each compound in methanol (0.6 mL) followed by heating to get a transparent solution. Deionized water (0.2 mL) was slowly added and the solution was again heated and gradually cooled to room temperature. At this temperature, the samples appear as turbid solutions.

RESULTS AND DISCUSSION: To characterize the morphologies and dimensions of the nanoassemblies, the structures were observed using transmission electron microscopy (TEM) and scanning electron microsopy (SEM). Figure 2 shows the transmission electron microscope (TEM) images showing the formations of various morphologies, which varied from nanotubes, nanosheets and nanopipes. Self-assembled morphology in case of A resulted in poorly formed nanotubes. Compound B gave nanosheets with sharp borders but with varying dimensions upon self-assembly. 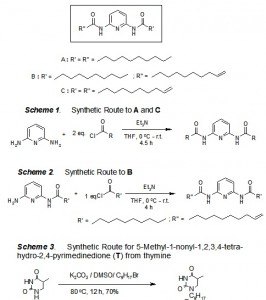 FIGURE 1: CHEMICAL STRUCTURES OF THE THREE N, N’-DIACYL-2, 6-DIAMINOPYRIDINES STUDIED FOR SELF-ASSEMBLY AND THE SYNTHESIS ROUTES

The tubular structures are open ended with a uniform shape and internal diameter and appear to be nanopipes. The inner wall diameter is 300 nm, and the outer diamter (ca. 150 nm) and the lengths are of the order of several microns. The TEM results mentioned above indicate that the nanotube formation is dependent on the nature of the alkyl chain. The location of a double bond at the C-10 in the symmetrical derivative C yielded aggregates with tubular morphology.

The requirement of a double bond was also shown to be prerequisite for tubular morphology for lipid nanotubes 8. 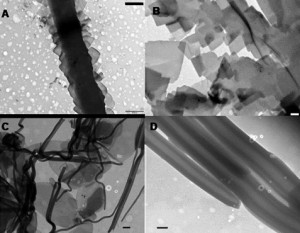 The mechanism and the forces that drive the formation of nanometric morphologies is not clearly understood 9. The amphiphiles A-C consists of  the diaminopyridine moiety and the saturated or unsaturated alkyl chain. It is likely that the p-p interactions between the pyridine groups provides the required rigidity and also plays a major role in directing the aggregation to form and extended sheet that is stabilzed by hydrophobic interactions. The formation of a tubular structure may occurr by the closure of the extended sheet as shown in Figure 3. A similar mechanism was also used to explain the formation of tubular structures by the self-assembly of diphenylalanine 10.

Powder X-ray diffraction (XRD) can be used to obtain insight into the molecular orientation of the self-assemblies 11. The XRD method involves the determination of the molecular length of the lipids A, B and C (molecular lengths L were approximately 29.2 Å) and the measurement of the X-ray diffraction patterns. The XRD results for the self-assembled A, B and C indicate that all have a single diffraction peak in the small angle region (d spacing of ≈ 31 Å), which shows the presence of long range ordering and suggests that the molecules form multilayered structures within the self-assemblies associated through hydrophobic interaction.

Using the relationship between d and L,12 it was observed that when d » L, the multilayers formed may be of the form shown in Figure 3. 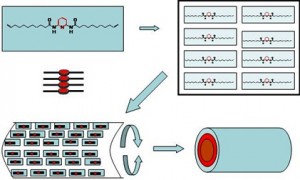 The availability of the DAP linker as recognition template for hydrogen bonding with molecules and as recognition sites for metal binding was studied and characterized by NMR and FT-IR. Self-assembly of N,N’-diacyl-2,6-diaminopyridines with alkylated thymine was characterized by 1H NMR spectroscopy. The condensation product of thymine with 1-bromononane (Scheme 3) was obtained at ambient temperature [5-methyl-1-nonyl-1,2,3,4-tetrahydro-2,4-pyrimidinedione (T)], is expected to increase the solubility in organic solvents.

The evidence for the molecular recognition of alkylated thymine by the formation of three-point hydrogen bonding comes from 1H NMR spectroscopic studies. The studies on mixture of A and T in CDCl3 were done by sequential addition of stock solution of T to that of A in 30 mL steps such that they form 1:1 combination at the end (as calculated and confirmed from integration ratios). The NMR spectra were recorded after each increment.

The observed results showed a significant downfield shift of the amide NH signal of compound A and imide NH of compound T as represented in figure 4. The figure shows the individual spectra of A and T and that of final mixture of 1:1 combination, all at 4 mM concentration at 25 oC. The amide NH of C shifted downfield from 7.5 to 8.8 ppm and the imide NH of T from 8.26 to 9.97 ppm. These observed downfield shifts upon the combination of A and T confirm the presence of strong hydrogen bonding interaction between the amide NH’s of A and carbonyls of T, and imide NH of T and aromatic ring nitrogen of A.13 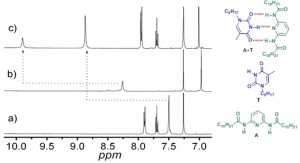 The observed shifts of  NH¢s are predominantly due to the assembly between A and T only, rather than the self-aggregation. This has been proved from the performed concentration dependency NMR experiments for A, where the downfield shifts for amide NH’s were nominal and are about 0.05 ppm over a concentration range of 2 mM to 17 mM. The A-T assembly formation should bring the amide NH of A and imide NH of T in to the proximity of each other.

The ROESY cross peak observed between these two NH¢s provides another supporting evidence for assembly.

The FT-IR spectra of self-assembled A, B and C reveal ordered structure of the aliphatic chain. The absorption bands of the antisymmetric (gas) and symmetric (gs) CH2 stretching vibrational modes are observed around 2920 cm-1 (gas C-H) and 2850 cm-1 (gs C-H). The antisymmetric CH2 stretching mode (2920 cm-1) is known to be sensitive to the conformational order of the alkyl chains. The present FT-IR studies confirm the presence of a highly ordered structure in the aliphatic region via van der Waals interactions.

The absence of a N-H stretching mode in the hydrogen bonding region and multiple N-H stretching peaks at 3290-3300 cm-1, which are attributed to a two-point hydrogen bonding 14, 15 confirms that the driving forces for the self-assembly of A-C are stabilized by a combination of p-p interactions and van der Waals interactions of the aliphatic chains which extends the structure to be stable  with a ordered 2D structure as shown in Figure 3. 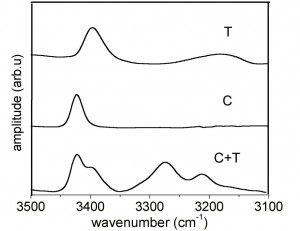 The studies shows that DAP is a template in the self-assembled nanotubes A-C and could serve as a functional recognition element.

The present study has demonstarted that N,N’-diacyl-2,6-diaminopyridines form nanoarchitetctures, depending on the double bond unsaturation. They formed nanotubes, nanosheets and nanopipes