ABSTRACT: Improvement in the bioavailability of poorly soluble drugs is one of the challenges faced in the formulation development of the drugs. One of the most admirable and viable formulation approaches for this is self micro emulsifying drug delivery system (SMEDDS). A combination of clarithromycin and amoxicillin has been proved effective for treatment of H. pylori which are available only in tablet dosage form. Hence, the aim of the present study was to prepare SMEDDS of amoxicillin and clarithromycin for better patient compliance. SMEDDS were prepared using Peceol, Cremophor EL and Transcutol as oil, surfactant and co-surfactant respectively. Prepared SMEDDS were evaluated for particle size, zeta potential, water dispersion properties, saturation solubility and in-vitro drug release. Dilution study by visual observation showed that there was spontaneous micro emulsification and no sign of phase separation. Study concluded that SMEDDS can be an effective alternative for tablet therapy with enhanced dissolution rate and bioavailability.

INTRODUCTION: With the advent of drug design, various molecules have been created which have a potential for therapeutic action. But most of the chemical entities are of high molecular weight and belong to biopharmaceutical classification system (BCS) – II, with poor aqueous solubility and high membrane permeability. Hence, the bioavailability of the drugs is hindered by low solubility which leads to low dissolution and limits absorption which ultimately leads to high inter-and intra-subject variability and lack of dose proportionality.1

Even though many modified drugs are available, few therapies require a combination drug regiment for effective treatment in high concentration which may not belong to the same class of BCS. In such cases, it is very difficult to combine the drugs together to improve patient compliance. One such example is treatment of Helicobacter pylori infection.

Antibiotics preferred for the treatment of h. pylori are clarithromycin and amoxicillin which has proved to be highly effective in the eradication of H. pylori.

The current therapy includes tablet dosage forms in high doses which may cause inconvenience to the patient and can also cause dose dumping and toxicity. There is no combination dosage form available for the same which can help in patient compliance and convenience to patient.3, 4

Self-emulsifying drug delivery systems (SMEDDS) are isotropic mixtures of oil, surfactant, co-surfactant and drug. It offers numerous advantages such as spontaneous formation, thermodynamic stability, improved bioavailability and feasibility for preparation. Enhanced solubility and improved bioavailability are amongst the main advantages of SMEDDS.5

As mentioned above, to prepare a combination dosage form of both the antibiotics, the main hurdle is the nature of the drugs, where in clarithromycin is lipophilic and amoxicillin is hydrophilic.

Here we have made and attempt to apply the principles of SMEDDS to combined delivery of hydrophilic and lipophilic drugs by using SMEDDS excipients as oil, surfactant, and co-surfactant. The prepared systems were evaluated for particle size, zeta potential, water dispersion properties, saturation solubility, assay and in-vitro drug release by filling in hard gelatine capsule shells. 6

Saturation Solubility Analysis: Pre formulation solubility analysis was done to select the vehicle in which drug is more soluble and suitable for formulation of SMEDDS. The solubility of amoxicillin and clarithromycin in various oils, surfactants and co-surfactants procured was determined by adding excess amount of the drugs into 1 ml of each vehicle in a centrifuge tube, followed by mixing at around 200 rpm in an orbital shaker (Electrolab, Mumbai) at room temperature for 24 h. The samples were centrifuged at 3000 rpm for 10 min to remove the excess drugs after which the concentration of amoxicillin and clarithromycin in the supernatant was measured by UV Spectrophotometer (Shimadzu UV 1800) after appropriate dilution with methanol for amoxicillin and 0.1 N HCl with FC reagent for clarithromycin (since clarithromycin showed very low detection in the UV region, it was detected in the visible region using a reagent). 7

Preparation of SMEDDS of Amoxicillin and Clarithromycin: A series of SMEDDS formulation were carried out by using Cremophor EL and Transcutol P as S/CoS combination and Peceol as oil. In all formulations the level of amoxicillin and clarithromycin was kept constant (i.e. 250 mg and 125 mg respectively) and the varying ratio of oil, surfactant and co-surfactant were added to the vial. Then the components were mixed by gentle stirring and sonication and were heated at 40ºC on a magnetic stirrer until the drugs was perfectly dissolved. 8 The mixture was stored at room temperature until further use. The various formulation ratios are given in Table 1.

1.1 Solubility Enhancement Studies: The solubility of SMEDDS and pure drugs in various solvents (water, 0.1N HCL pH 1.2) was determined by adding a fixed dose of amoxicillin and clarithromycin (i.e. 250 mg and 125 mg) into 1 ml of each vehicle in a centrifuge tube, followed by mixing at around 200 rpm in an orbital shaker at room temperature for 24 h. The samples were centrifuged at 3000 rpm for 5 min to remove the excess drugs after which the concentration of amoxicillin and clarithromycin in the supernatant was measured by UV Spectrophotometer after appropriate dilution with the required solvent.

1.2 Determination of Particle Size and Zeta potential: Globule size and polydispersity index of the amoxicillin and clarithromycin SMEDDS were determined by particle size analyser. Data analysis was conducted using software package provided by manufacturer. The emulsion stability is directly related to the magnitude of the surface charge. The zeta potential of the diluted SMEDDS formulation was measured using a (Zetasizer instrument). The SMEDDS were diluted with a ratio of 1:10 v/v with distilled water and mixed for 1m using a cyclomixer.

1.3 Self-Emulsification Assessment: Evaluation of the self-emulsifying properties of SMEDDS formulations was performed by visual assessed using the grading system given in Table 2. In brief, different compositions were categorized on speed of emulsification, clarity and apparent stability of the resultant emulsion. Visual assessment was performed by drop wise addition of the SMEDDS into 250 ml of distilled water. This was done in a glass beaker at room temperature, and the contents were gently stirred magnetically at ~100 rpm.

1.4 In- vitro Drug Release Studies: The In-vitro dissolution studies were carried out by using paddle type USP dissolution apparatus II. Dissolution test was done on SMEDDS capsules containing the drug equivalent to 250 mg and 125 mg of pure drugs. Dissolution was carried out in 900 ml 0.1 N HCl at 50 rpm at temperature of 37 ± 0.5°C. Sample aliquots (10ml) of dissolution medium were withdrawn at different time intervals of 30, 60, 90 and 120 min. Necessary dilutions were made with 0.1 N HCl. The samples were assayed spectrometrically at 229.2 nm and 761.5 nm respectively.

Saturation Solubility Analysis: The components used in the system showed high solubilization capacity for the drug, ensuring the solubilization of the drug in the resultant dispersion and therefore avoiding precipitation of drug on dilution. Results from solubility studies are reported in Fig.1, 2 and 3 and as seen, combination of peceol, cremophor EL and transcutol P showed the highest solubilization capacity for amoxicillin and clarithromycin which were selected as oil, surfactant and co- surfactant, respectively. 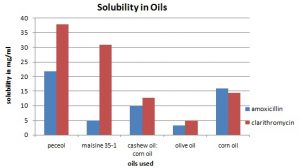 2.1 Solubility Enhancement Studies: Solubility of pure drug and SMEDDS were evaluated and amoxicillin and clarithromycin SMEDDS showed considerable enhancement in solubility as compared to the pure drug.

Particle size distribution is depicted in Fig.4. Formulation F1 and F2 have zeta potential 79.55 mV and 67.61 mV respectively. The zeta potential indicates that there is no flocculation of particles and thus the microemulsion was stable.

2.3 Self-Emulsification Assessment: It was seen that an increase in the proportion of cremophor EL, the composition resulted in decreasing self-emulsification time. The decrease in self- emulsification time can be assumed to be due the relative increase in surfactant concentration, leading to decreased viscosity of the formulation. The S/CoS ratio of 1:1 was kept constant for the initial formulation study. However, with an increase in the surfactant ratio, it was found that the resultant dispersion showed precipitation and thus was not stable. Transcutol P when added as a co- surfactant seems to increase the solubilization capacity of the vehicle. 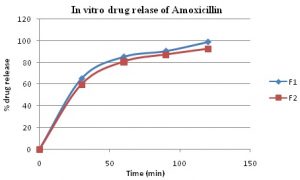 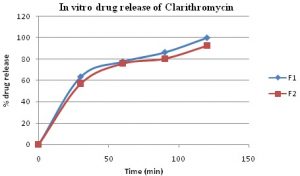 2.5 Drug Content: Formulation F1 and F2 were assayed spectrophotometrically for the drug content at the wavelength 229.5 nm and 761.5 nm for amoxicillin and clarithromycin respectively with proper dilution of formulations taking methanol and 0.1 N HCl with FC reagent. Results of content uniformity were shown in Table no.5. Formulation F1 had highest content uniformity 97% of amoxicillin and 98% of clarithromycin which was higher compared to F2.

TABLE 5: DRUG CONTENT OF AMOXICILLIN AND CLARITHROMYCIN IN SMEDDS

From the results obtained above it can be seen that there was a marked increase in the solubility and dissolution of combined systems of hydrophilic and lipophilic drugs. The reason for the same can be solubilisation of lipophilic drug into oil and S/CoS system and consecutive emulsification to sub micron size and for hydrophilic drugs it can be wetting by modified surfactant and co surfactant system which enhances the solubility and dissolution.

From the above studies it can be concluded that SMEDDS is not only a better alternative for lipophilic drugs but can also be effectively used for combinations of hydrophilic and lipophilic drugs.