ABSTRACT: Sarecycline, a narrow spectrum tetracycline-derived antibiotic, is used to treat moderate to severe Acne vulgaris. The current study is aimed at developing a simple, sensitive and accurate liquid chromatography-tandem mass spectrometric (LC/MS/MS) method and validating the same for determination of sarecycline in human plasma. Zorbax, SB C18, 4.6 mm × 75 mm, 3.5 μm, 80 Å column, 10 mM ammonium formate (pH 4.5.): acetonitrile (50:50 v/v) mobile phase was used for chromatographic separation of sarecycline. The sarecycline and minocycline were monitored by electrospray ionization in positive ion multiple reaction monitoring (MRM) modes. This mode was used to detect the sarecycline and minocycline (IS) at m/z 488.6 / 291.1 and 458.4 / 337.2. Liquid-liquid extraction was employed in the extraction of analytes from human plasma. This method is validated over a linear concentration range of 0.5-150.0 ng/mL with a correlation coefficient (r) of ≥ 0.9997. Both drug and internal standards (IS) were stable in plasma samples.

INTRODUCTION: Sarecycline is the first narrow-spectrum tetracycline-class antibiotic being developed for acne treatment. In addition to exhibiting activity against important skin/soft tissue pathogens, sarecycline exhibits targeted antibacterial activity against clinical isolates of Cutibacterium acnes 1-3. The antimicrobial action of tetracyclines against C. acnes occurs via inhibition of protein synthesis 4-8. In addition, C. acnes also produce proteins/enzymes that play an important role in inflammation (e.g., lipase) which would also be down-regulated as a consequence of inhibition of protein synthesis and may account for the anti-inflammatory properties observed with sarecycline and other tetracyclines 9-12. 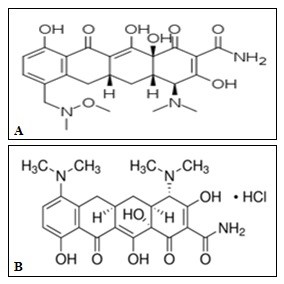 FIG. 1: CHEMICAL STRUCTURES OF A) SARECYCLINE B) MINOCYCLINE

The main goal of the present study is to develop and validate the novel, simple, sensitive, selective, rapid, rugged and reproducible analytical method for the quantitative determination of Sarecycline in human plasma by HPLC-ESI-MS/MS 18-22. 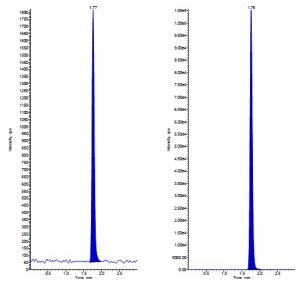 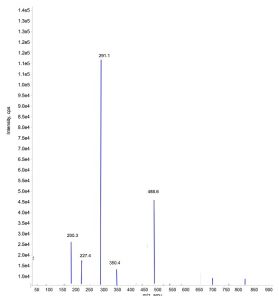 Chromatographic Conditions: A good separation and elution were achieved using Zorbax, SB C18, 4.6 mm × 75 mm, 3.5 μm was selected as the analytical column. The mobile phase composition was 10mM Ammonium formate: acteonitrile (50:50 v/v) at a flow rate of 0.5 mL/min and 10 mL injection volume was used. The column temperature was set at 40 °C. Minocycline was found to be appropriate internal standard. Retention time of sarecycline and minocycline were found to be 1.5 ± 0.2 min, with overall runtime of 3.0 min.

Sample Preparation: Liquid-liquid extraction was used to isolate sarecycline and minocycline from human plasma. 100 μL of minocycline spiking solution (8.0 ng/mL) and 200 μL of plasma sample (respective concentration) were added respective ria vials and vortexed for 30 seconds followed by 100 μl of 0.5N sodium carbonate solution was added and vortexed for 10 minutes. Then 2.5 mL of extraction solvent (Methyl Tertiary butyl ether) was added and vortexed approximately for 20 min. This was followed by centrifugation at 4000 rpm for 5 min at 20 °C. Then samples were Flash freeze by using dry-ice/Acetone. The supernatant from each ria vial was transferred into another set of fresh ria vial. These samples were evaporated at 40 °C under nitrogen until dry. Finally, the dried residue samples were reconstituted with 500 μL of reconstitution solution (10mM Ammonium formate (pH 4.5): acetonitrile 50:50, v/v) and vortexed briefly. These samples were transferred into autosampler vials and injected into LC-MS/MS.

Matrix Effect: The matrix effect due to plasma was used to evaluate the ion suppression/ enhancement in a signal when comparing the absolute response of QC samples after pretreatment (Liquid-liquid extraction with MTBE) with that of the reconstituted samples. Experiments were performed at MQC levels in triplicate with six different plasma lots. The acceptable precision (% CV) of ≤ 15% was maintained.

Recovery: The extraction efficiencies of SC and MC were determined by analysis of six replicates at each quality control concentration level and at one concentration for the internal standard MC. The percent recovery was evaluated by comparing the peak areas of extracted standards to the peak areas of non extracted standards (spiked into the mobile phase).

Limit of Detection and Quantification (LOD and LOQ): The limit of detection (LOD) is a parameter that provides the lowest concentration in a sample that can be detected from background noise but not quantitated. LOD was determined using the signal-to-noise ratio (s/n) of 3:1 by comparing test results from samples with known concentrations of analytes with blank samples. The limit of quantitation (LOQ) is defined as the lowest concentration of analyte that can be determined with acceptable precision and accuracy. The LOQ was found by analyzing a set of mobile phase and plasma standards with a known concentration of MC.

Method Development and Validation: The goal of this work is to develop and validate a simple, rapid and sensitive assay method for the quantitative determination of MC from plasma samples. LC-MS/MS has been used as one of the most powerful analytical tools in clinical pharmacokinetics for its selectivity, sensitivity and reproducibility. The MS optimization was performed by direct infusion of solutions of SC and MC into the ESI source of the mass spectrometer. The vital parameters like ionization type, temperature and voltage, gas parameters such as nebulizer and heater gases, compound parameters like DP, EP, FP, CE and CXP were optimized to obtain a better spray shape and ionization to form the respective productions from the protonated SC and MC molecules. Chromatographic conditions, especially the composition of the mobile phase and selection of suitable column were optimized through several trials to achieve the best resolution and increase the signal of analyte and internal standard. Different extraction methods like solid-phase extraction, liquid-liquid extraction, precipitation methods were optimized for extraction of SC and MC from the plasma sample. Good separation and elution were achieved using 5 mM ammonium formate: acetonitrile (10:90 v/v) as the mobile phase, flow-rate of 0.5 mL/min and injection volume of 10 μL. Liquid-liquid extraction was chosen to optimize the drug and internal standard. Minocycline was found to be an appropriate internal standard. The retention time of sarecycline and minocycline were found to be 1.5 ± 0.2 min, with an overall runtime of 3.0 min Fig. 4. 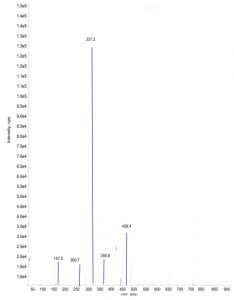 FIG. 4: MASS SPECTRUM OF MINOCYCLINE OF Q1 AND Q3 IONS

Linearity: Calibration curve was plotted as the peak area ratio (SC/MC) versus (SC) concentration. Calibration was found to be linear over the concentration range of 0.5 - 150.0 ng/mL. The correlation coefficient (r2) was greater than 0.9997 for all curves in Table 1.

Selectivity: The selectivity of the method assessed by comparing the chromatograms obtained. There were no significant endogenous peaks observed at the respective retention time of SC and MC. The results indicate that the method exhibited both good specificity and selectivity.

Matrix Effect: The ion suppression/enhancement in the signal at MQC level was found % CV less than 5. These results indicating that there is no effect on ion suppression and ion enhancement.

Stability (Freeze-Thaw, Autosampler, Room Temperature, Long Term): Stock solution stability was performed to check the stability of SC and MC in-stock solutions prepared in methanol and stored at 2-8 °C in a refrigerator. The freshly prepared stock solutions were compared with stock solutions prepared before 26 days. The % change for SC and MC was less than 1% indicates that stock solutions were stable at least for 26 days. Room temperature and autosampler stability for SC were investigated at LQC and HQC levels. The results revealed that SC was stable in plasma for at least 26 h at room temperature, and 57 h in an autosampler. It was confirmed that repeated freezing and thawing (three cycles) of plasma samples spiked with SC at LQC and HQC levels did not affect their stability. The long-term stability results also indicated that SC was stable in a matrix up to 65 days at a storage temperature of -30 °C.

The results obtained from all these stability studies are tabulated in Table 3. Precision (% CV) is less than 5 for Room temperature, long-term, Freeze-thaw, autosampler stability.

CONCLUSION: The proposed research work is highly specific due to the inherent selectivity of tandem mass spectrometry and has significant advantages over other described methods in previously. Quantification of sarecycline was compared with respective isotope labeled internal standards. Extraction of analyte and IS were achieved by using LLE. Linearity range, column, mobile phase, flow rate, injection volume, plasma usage volume for analysis was improved.  Hence this method has significant advantages over previously reported methods in-terms of Selectivity, sensitivity, Linearity, Reproducibility.

CONFLICTS OF INTEREST: Authors declare that there is no conflict of interest.