ABSTRACT: Accurate and sensitive assay methods for quantitative determination of Rutoside trihydrate (rutin), Trypsin and Bromelain in tablet formulation based on UV-spectrophometric analysis were developed and validated. This three drug combination has anti-inflammatory properties and hence is used for treatment of edema and inflammations. Rutin was analyzed directly by UV-Vis spectrophotometer at 257nm because Trypsin and Bromelain are not UV-active therefore they don’t interfere in the analysis of rutin. Trypsin and Bromelain being proteolytic enzymes, Casein was used as substrates for their analysis. Casein was standardized according to Bradford assay using Bovine serum albumin as a standard. Casein was hydrolyzed to amino acid tyrosine by both the proteolytic enzymes. Tyrosine formed was further reacted with Folin-Ciolcalteu (F-C) reagent and absorbance was recorded at 785nm. Trypsin was inhibited by specific trypsin inhibitor Nα-p-tosyl-L-lysine chloromethyl Ketone (TLCK) and specific proteolytic activity of Bromelain was analysed using casein. Bromelain was inactive towards N-a-benzoyl-DL-arginine p-nitroaniline (BApNA) therefore; BApNA was used as a specific substrate for analysis of Trypsin. BApNA was hydrolyzed to pNA by Trypsin which was further diazotized with N (1 Naphthyl) Ethylene Diamine Dihydochloride (NEDD) and absorbance was recorded at 545nm. Intra- and inter-day precision of all the methods developed were within acceptable limits. All methods were validated as per ICH guidelines and can be adopted for the routine analysis of Trypsin, Rutoside trihydrate and Bromelain in tablet formulations

The combination of Trypsin, Bromelain, and Rutoside trihydrate can also be used in the treatment of Osteoarthritis, Rheumatoid Arthritis, Spondylopathies, Tendonitis and Bursitis.

Rutoside trihydrate also known as Rutin (3-[[6-O-(6-Deoxy-α-L-mannopyranosyl)βDglucopyranosyl] oxy]-2-(3, 4-dihydroxyphenyl)-5 7-dihydroxy-4H-1 benzopyran-4-one) is a flavonoid of the flavonol type1. It is found in many typical nutrimental plants such as buckwheat, apple and black tea. Rutin helps preventing hemorrhages and ruptures in the capillaries and connective tissues, and is therefore often used to treat chronic venous insufficiency, hemorrhages and epitaxis 2, 3. Similar to many flavonoid derivatives it also displays a remarkable array of pharmacological and biological activities, such as antioxidant, antiinflammatory, anticarcinogenic, antithrombic and vasoprotective activities Figure 1. 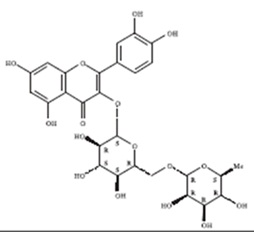 Trypsin is a proteolytic enzyme obtained by the activation of trypsinogen extracted from the pancreas of healthy mammals. It is a member of mammalian “serine” protease family 4.

It hydrolyses protein hence it is generally used to digest proteins into peptides5. It improves humoral response & and prevents growth of pathogens by removing dead and necrotic tissue. It inhibits the C-reactive protein titres and prevents increase in serum acute phase proteins6. Thus, it has anti-inflammatory activity.

Bromelain belongs to a group of protein digesting enzymes obtained commercially from the fruit or stem of pineapple7.  “Bromelain” refers usually to the “stem bromelain” and is a member of cysteine proteinase family8. Bromelain exhibits various fibrinolytic, antiedematous, antithrombotic, and anti-inflammatory activities.

Bromelain is considerably absorbable in the body without losing its proteolytic activity and without producing any major side effects. Preferential cleavage site is the carbonyl end of lysine, alanine, tyrosine and glycine. So far, a number of analytical techniques have been described for determination of rutin, trypsin and bromelain. However, no method is described for estimation of rutin with both proteolytic enzymes in any dosage form.

This study describes accurate and precise methods for determination of trypsin, bromelain and rutoside trihydrate in oral dosage forms. The method has been validated with respect to linearity range, limit of detection (LOD), limit of quantitation (LOQ), precision and accuracy10. The proposed methods have been applied to the analysis of all the three drugs in commercially available pharmaceutical preparations Enzomac (Trypsin 48mg, Bromelain 90 mg, Rutoside Trihydate 100mg.)

A Shimadzu model 1700 double beam UV-Visible spectrophotometer connected with computer and also with spectral width of 1 nm, wavelength accuracy of ± 0.1 nm and a pair of 10 mm matched quartz cell was used to measure absorbance of all the solutions. Spectra were automatically obtained by UV-Probe system software (Ver.2.34). The samples were weighed on electronic analytical balance (A×120, shimadzu). pH meter  (Lab india), Sonicator (SelecXT543), Centrifuge (REMI).

Bradford reagent- Bradford reagent was made by dissolving 10 mg Coomassie Blue G-250 in 5 ml 95% methanol, 10 ml 85% (w/v) phosphoric acid was added to this solution and the mixture was diluted to 100 ml with water. CuSO4 mixture- Equivalent volume of 0.1M NaOH + 2% w/w Na2CO3 + 0.5% sodium potassium tartarate + 0.5% sodium dodecyl sulphate was added to 1% w/w CuSO4.5H2O as per 10:1 ratio. Folin-ciocalteu reagent- 1N F-C reagent was prepared by diluting 2N solution with distill water as per 1:1 ratio. BApNA solution- 5mg/ml BApNA solution was prepared by first dissolving BApNA in DMSO and making up the volume with tris buffer.

Procedure for analysis of Rutin:

The stock standard solution of rutin was prepared by dissolving 10 mg of rutin in 100ml Methanol to get a solution containing 100 μg/ml of rutin10. Series of dilutions were prepared by aliquoting 0.5, 1.0, 2.0, 3.0, 4.0 and 5.0ml of the standard stock solution and diluted with methanol to yield 10mL of standard solutions containing 5 to 50 μg/ml of rutin, respectively. The absorbance of resulting solution was measured at its λmax. A calibration curve as concentration vs. absorbance was constructed to study the Beer-Lambert’s Law and regression equation.

Method for analysis of bromelain and trypsin (Total proteolytic activity):

Casein was used as a substrate for analysis of total proteolytic activity of Bromelain and Trypsin and was standardized according to Bradford assay 11.

A 100ppm standard solution of BSA was prepared by dissolving 10 mg BSA in 100ml 0.2M phosphate buffer pH 7.5. Series of dilutions were prepared in the same buffer to get concentrations ranging from 10 to 50μg/ml respectively. 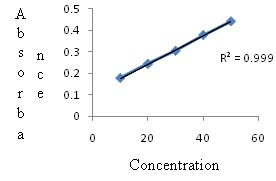 2 ml of each diluted solution was taken and 8 ml Bradford reagent was added. Samples were incubated at room temperature for 5 min. Absorbance was measured at 585nm using UV-Vis spectrophotometer. The concentration of protein was determined using y=mx+b equation. Casein solution, 50μg/ml was prepared in Phosphate buffer and procedure was carried out in a similar manner Figure 2.

Procedure for analysis of Trypsin and Bromelain (Determination of total proteolytic activity):

5ml of casein solution (6.5mg/ml prepared in 0.2M Phosphate buffer) was taken and incubated at 37ᵒC for 5 minutes. 1ml of freshly prepared enzyme solution in 10mM Na acetate solution was added & kept at 37ᵒC for 10min. Reaction was inhibited by addition of 4ml of 1M trichloroacetic acid and kept for 30min at room temperature. The solution was centrifuged at 2000 rpm for 7 minutes12.

The supernatant was collected and was neutralized by 0.1N NaOH. Tyrosine which was formed due to hydrolysis was analyzed further in following manner. 1 ml of each dilution containing tyrosine was taken. To this 5 ml of CuSO4 mixture was added and shaken well. This solution was kept at room temperature for 10 min. 0.5 ml of diluted F.C reagent (1:1) was added and solutions were shaken. All the samples were kept at room temperature for 30 minutes and absorbance was measured within 45 minutes at 785nm. A calibration curve as concentration vs. absorbance was constructed using standard tyrosine solutions to study the Beer-Lambert’s Law and regression equation.

Specific proteolytic activity was determined by inhibiting Trypsin by TLCK13. 5mg/ml of TLCK solution was prepared in distill water. 5ml of this solution was added to 500μg/ml of total proteolytic enzyme concentration and incubated at 37ᵒC for 10 min14. Casein was added after 10 min. and further procedure was carried out in a similar manner for hydrolysis of casein.

METHOD FOR ANALYSIS OF SPECIFIC PROTEOLYTIC ACTIVITY OF TRYPSIN:

Analysis of trysin by hydrolysis of substrate BApNA:

0.6ml of enzyme solution prepared in distill water was taken and 3ml of 50mM tris buffer with 0.6 ml of distill water was added15. Solution was shaken well. 0.6 ml of freshly prepared BApNA solution was added and incubated at 35-40ᵒc for 30 min. Reaction was stopped by adding 2ml of 3N HCL. BApNA was hydrolyzed to pNA which was analyzed in following manner. 1ml of each diluted solution containing pNA was taken and 4ml of 0.1% sodium nitrite solution was added. This was kept in icebath for 10 min.

Then 4ml of 0.5% ammonium sulfamate was added, shaken well and again kept in icebath for 5 min. Finally, 1ml of 1% NEDD dye was added and the solution was kept at room temperature for 15 min. The absorbance of resulting solution was measured at its analytical wavelength 545nm. A calibration curve as concentration vs. absorbance was constructed using standard pNA solutions to study the Beer-Lambert’s Law and regression equation. 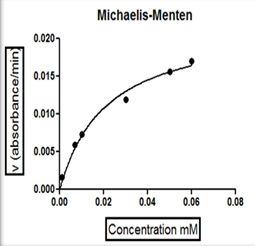 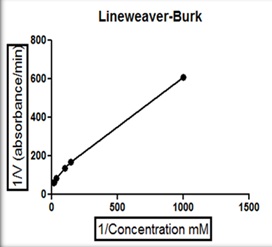 Contour graphs were plotted for optimization of parameters with the help of Design Expert software version 7.0.0 by considering 3 variables temperature, time and concentration for enzyme trypsin. Optimization was carried out by calculating average velocity (abs/min) Figure 5 and Table 2.

TABLE 2: SUMMARY OF OPTIMIZATION OF PARAMETERS 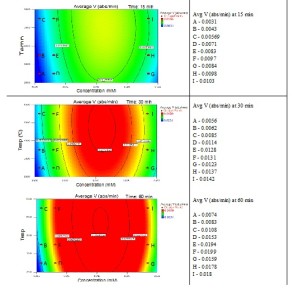 Validity of the proposed methods was tested for pharmaceutical preparation by assaying Enzomac tablets (labeled to contaion 100mg of rutoside trihydrate and proteolytic activity of Bromelain and Trypsin not less than 1095 FIP units).

Forstudyingtheaccuracyoftheproposedmethods,andforcheckingtheinterferencefrom excipientsusedinthedosageforms,recoveryexperimentswerecarriedoutbythestandard addition method. This study was evaluated through the percentage of recovery of known amounts of rutin, bromelain and trypsin added to solutions of the commercial product. The analyzed samples were spiked with extra 80, 100 and 120 % of standard rutin, Bromelain and trypsin solution. Accuracy was calculated from the following equation: [(spiked concentration−mean concentration)/ spiked concentration] ×100 Table3.

TABLE 3: RESULT OF RECOVERY STUDY OF RUTIN, BROMELAIN AND TRYPSIN BY DEVELOPED METHODS

For Estimation of Rutin:

For rutin, appropriate dilutions of standard solutions were assayed as per the developed method. The Beer- Lambert’s concentration range was found to be 5-50 μg/ml for rutin Table 4.

For estimation of Bromelain:

Casein was hydrolysed to tyrosine, the BEER-Lambert’s concentration range for tyrosine was found to be 20-70μg/ml Table 4.

For estimation of Trypsin:

BApNA was hydrolysed to pNA, the Beer-Lambert’s concentration range for pNA was found to be 5-30 μg/ml Table 4.

LIMIT OF DETECTION (LOD) AND LIMIT OF QUANTITATION (LOQ):

Analysis of Bromelain and Trypsin:

Bromelain and Trypsin hydrolyzes casein into small peptides at alkaline pH so pH was kept above 7. This tyrosine formed cannot be precipitated with a specific reagent. Therefore, after incubation (10 min at 35 °C) undigested casein which can be precipitated is removed by acidifying the solution with trichloroacetic acid and the amount of peptides remaining in solution was than reacted with F-C reagent in presence of copper sulphate which is then  determined by UV-Vis spectrophotometer at 785nm.

Trysin was inhibited by specific trypsin inhibitor TLCK as it inhibiths serine which is end amino acid of trypsin. Bromelain is unaffected by TLCK so bromelain remaining in the solution is determined by hydrolysis of casein.

Trypsin hydrolyses BApNA to pNA at alkaline pH. Arginine is not a preferential cleavage site for Bromelain so it doesn’t hydrolyze BApNA. The reaction is inhibited by acididfying the solution by addition of 3N HCL. pNA formed is the diazotized by NEDD to give a colored product which is then determined by UV-Vis spectrophotometer at 545nm Figure 6.

FIGURE 6: REACTION MECHANISM FOR HYDROLYSIS OF BApNA BY TRYPSIN

Proteolytic activity was determined in terms of FIP units. 1 FIP unit of enzyme is the amount of enzyme that hydrolyzes protein under the standard conditions into not acid-precipitable peptides at an initial rate such that there is liberated per minute an amount of peptides which gives the same absorbance as 1 °mole of that peptide.

On the basis of these conversions FIP units in tablet was calculated.

CONCLUSIONS: The proposed methods are simple, accurate, rapid and selective for routine analysis of Rutin, Bromelain and Trypsin in tablet formulations. The methods are more selective than reported spectrophotometric methods and are free from interferences from the common excipients. The statistical parameters and the recovery data reveal good accuracy and precision of the methods. The developed methods can be used as general methods for determination of proteolytic activity of proteolytic enzyme in any dosage form or formulation.