ABSTRACT: Azima tetracantha is a small flowering shrub belongs to salvadoraceae family and commonly known as mulluchangu or mulsangu in Tamil. It is an best known medicinal plant ,which  have a central role in the treatment of disease from pre historical period .From the plant lot of phytochemicals has been reported  such as alkaloids, steroids ,tannins, terpenoids, flavonoids, glycosides, phenols  etc  and also  possesses activities such as  antioxidant, antifungal, antibacterial , hepatoprotective, antidiabetic and antihyperlipidemic etc .In the present study preliminary evaluation and isolation of  an active pharmacological compound euphol was obtained from the chloroform extract of the leaves of  Azima tetracantha was carried out. The compound euphol is a tetracyclic triterpene alcohol which produces antinociceptive effects in inflammatory and neuropathic pain. The compound was isolated by column chromatography and characterized by chemical test, TLC, FTIR, NMR, C 13 NMR spectrum. In future it may be a promising molecule for the management of neuropathic pain.

INTRODUCTION: Azima tetracantha (Family: Salvadoraceae) locally known as “Mulsangu”, is a rambling spinous shrub flowering throughout the year found in Peninsular India, West Bengal and extends through Arabia to tropical Asia. The common names of the plant are Uppimullu, Mulchangan, Needle bush, Yasanku and Kundali in Ayurvedic medicine. The leaves of the plant are elliptical in shape and are rigid, pale green colored. The flowers are small, greenish white (or) yellow colored, unisexual in axillary fasciles.

The berries are white in colour; usually one seeded and edible. Azima tetracantha root bark is used in muscular rheumatism, while the leaf juice is used for treating tooth and ear ache. In India and Sri Lanka the root, root bark and leaves are added to food as a remedy for rheumatism. The plant is bitter, analgesic, stimulant, tonic, cures kappa, rheumatism, cough and asthma 1.

Azima tetracantha leaf powder was assessed for its anti-inflammatory activity 2. The ethanolic leaf extract of Azima tetracantha was investigated for hypoglycemic and hypolipidemic activity in alloxan-induced diabetic albino rats 3. Euphol, an alcohol tetracyclic triterpene, has a wide range of pharmacological properties and is considered to have anti-inflammatory action. Euphol consistently blocked the mechanical hyperalgesia induced by complete Freund's adjuvant, keratinocyte-derived chemokine, interleukin-1β, interleukin-6 and tumor necrosis factor-alpha associated with the suppression of myeloperoxidase activity in the mouse paw 4.

Collection of Plant Material: The leaves of Azima tetracantha were collected from the Sengottai, Tirunelveli, Tamil Nadu, India in the month of October 2009. The plant material was identified and authenticated by Mr. V. Chelladurai, Retired   Research officer-botany, C.C.R.A.S. Govt. of India, Tirunelveli.

Freshly collected plant material was dried in shade and then coarsely powdered in a blender. The coarse powder was successively extracted in an aspirated bottle with n-Hexane, Chloroform, Ethyl acetate, Ethanol and Water for about 72, 48 and 24 hours by maceration technique. After decantation, filtered through the Whatmann filter paper No.41 .Solvent distilled and concentrated.  Concentrated extract was used for further studies.

The preliminary phytochemical screening of the chloroform fraction was carried out as per the standard procedures 5, 6 the fraction was subjected to various qualitative tests and the chemical constituents of the sample were identified. The result were shown in Table 1.

Isolation of Euphol by Column Chromatography: Compared to other solvent extracts chloroform extract shows more yields (9.8gm) and in preliminary screening it shows the presence of terpenoids and steroids. So it was taken for further studies.

A 54 x 4.5 cm glass column was packed with silica gel of 60-120 mesh as slurry suspended in the hexane (mobile phase). Chloroform extract (9.8gm) was mixed with silica gel (60-120mesh size) and packed on top of silica gel. The solvents of increasing polarity n-hexane, chloroform, ethyl acetate, ethanol and water and their mixture were run through the column in different ratio. The ratio of hexane: chloroform (70:30)   was used to isolate the compound.

Chemical Test: The fraction obtained n-hexane: Chloroform (70:30) treated with a bit of tin and thionyl chloride. Pink colour was observed, indicates the presence of Terpenoids.

Thin-layer chromatography (TLC) is a chromatography technique used to separate non-volatile mixtures. After the sample has been applied on the plate, a solvent mixture (n-hexane: Ethyl acetate,) in a ratio of (9:3) used to elute a compound via drawn up the sample by capillary action 7, 8. Then the plate was kept in an oven for period of time, finally purple colour spot observed when sprayed with 50% Aq.H2SO4 as detecting agent. The result were shown in Fig.1

IR spectrum of the isolated compound was done by KBR pellet technique. Take about 1/8” of the sample on a microspatula and about 0.25-0.50 teaspoons of KBr. Mix thoroughly in a mortar while grinding with the pestle. If the sample is in large crystals, grind the sample separately before adding KBr. Place just enough sample to cover bottom in pellet die and press at 5000-10000 psi. Carefully remove the pressed sample from die and place in the FTIR sample holder. The pressed disc should be nearly clear if properly made. If it is translucent, regrind and repress 9. To determine the chemical functional groups in the sample, the fundamental region between 4000-600 cm-1 provides greater information for the elucidation of molecular structure. IR spectroscopy was recorded on a Bruker optic GMDH instrument at 4000cm-1-600cm-1. The result were shown in Table 2 and Fig. 2.

Nuclear magnetic resonance spectroscopy is most useful for elucidating the structure of a chemical species. H1 and C13 are the most important for the investigation of molecular structure and interactions. CDCl3 (Deuterochloroform) and TMS (tetramethylsilane) were used as solvent and an internal standard respectively 10. Chemical shift were measured in delta scale in ppm with TMS as zero. The compound was subjected to NMR spectroscopy on instrument Bruker of 100 MHz capacity using CDCl3 as the solvent. The result was shown in Table 3 and Fig.3 and 4 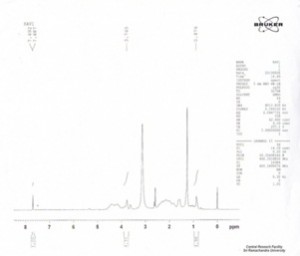 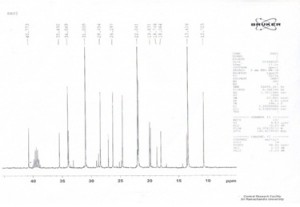 The crude extract of an leaves of Azima tetracantha were extracted   by using different solvents like Hexane, Chloroform, Ethyl acetate, Ethanol and Water. Compare to other solvents   chloroform and hexane extracts shows more yield, so those solvents were used for further spectral studies.

The bio active compound was isolated from the leaves extract of Azima tetracantha  using coloum chromatography and  the chemical test , TLC was performed  for the isolated compound which  shows pink colour spot and its indicate the presence of terpenoids. The result was shown in Fig. 1.

The structure of the compound were analysed by spectral analysis (IR, 1H NMR, 13C NMR).   The interpretation of the spectrum reveals that the probable chemical constituent of the isolated compound Euphol. The results were shown in Table 2 and 3 and Fig. 2, 3 and 4.

CONCLUSION: Science has long acknowledged the valuable medicinal shrub Azima tetracantha, it has wide range of application in medicinal field such as antifungal, antioxidant, antimicrobial, anticancer etc, the preliminary studies of an Azima tetracantha shows presence of many phytochemicals. The phytochemical terpenoids (euphol) were isolated and its structure was elucidated, the compound euphol has many pharmacological actions such as neurological pain. Our future aim is to isolate more quantity of active constituents from the column chromatography responsible for the above activities and also to carry out the In-vivo investigation.

ACKNOWLEDGEMENT: Authors are greatful to thank the institute (C. L. Baid Metha College of Pharmacy) and workers who provided all the facility for our work