Background:  The hypothalamic pituitary adrenal (HPA) axis in asthmatic patients is influenced by many factors. Stress, cytokines and exogenous corticosteroids play an important role in regulating the HPA axis and thus affecting the adreno corticotrophic hormone (ACTH) and cortisol levels among these patients. It is well accepted that the HPA axis represents a major immune-regulatory system that plays an important role in balancing the immune response especially under stressful condition. We evaluated the serum cortisol and serum ACTH levels in Asthma patients of Hyderabad.

Conclusions: Adrenal functions were normal in asthmatics as in control population. This could be due to the intervention of various drugs administered to these patients.

INTRODUCTION: The hypothalamus is activated to secrete corticotrophin-releasing hormone (CRH) and arginine vasopressin (AVP) by the central nervous system (CNS) in response to circadian stimuli 1.

The CRH and AVP thus secreted by the hypothalamus act synergistically on the anterior pituitary gland to secrete ACTH. This ACTH is responsible for increasing cortisol synthesis and release within 2-3 min 3. The cortisol is synthesized only when there is demand in the body and very little amount of this cortisol is stored in the adrenals for future use. Thus, the cortisol concentration depends largely on the ACTH levels, decreasing when ACTH production is diminished. There is a negative feedback mechanism acting on hypothalamic and pituitary level, and possibly at higher centers in order to regulate the glucocorticoid secretion 3.

ACTH is secreted in a circadian pattern influencing the production and release of cortisol levels in the body. The levels are highest between 04.00 and 10.00 hours with a peak at 08.00 hours in the morning. Levels reach their lowest at midnight (00.00–03.00 hours). Episodic increases also occur at meal times 3, 4. Negative feedback control ensures that the plasma cortisol concentration is kept at the appropriate level at all times.

This circadian rhythm and its negative feedback control mechanism can be disturbed by stress factors. In asthmatic individuals there is a possible dysfunction of the HPA axis leading to reduced levels of cortisol in response to psychosocial stress 5. The role of HPA axis as a major immunoregulatory system in balancing the immune response especially under stressful conditions is well established. It has been proven by animal studies that an appropriate responsiveness of the HPA axis is necessary to control immunological processes, and to prevent an immune response from reaching a level that may damage the host 6, 7.

Cytokines have been shown to play an important role in the activation of HPA axis. So far three cytokines, TNF α, IL-1, and IL-6 have been described in HPA axis stimulating activity in plasma. TNF α is the first cytokine to appear followed by secretion of IL-1 and IL-6 8-10.

The three cytokines stimulate their own secretion from the cells responsible for their secretion. In addition, they also regulate the stimulation and inhibition of secretion of each other. TNF-α and IL-1 stimulate the secretion of IL-6, whereas IL-6 inhibits the secretion of TNF-α and IL-1 11, 12. These inflammatory cytokines are capable of activating the HPA axis independently or in combination 13-18. They also mediate the stimulation of the HPA axis through bacterial lipopolysaccharides as it was proven by the use of antibodies against IL-6 completely inhibiting this effect 18. IL-6 has also been shown to be capable of elevating plasma concentrations of corticotrophin and cortisol well above their normal range in humans.

ICS have been in use for the treatment of asthma and other allergic disorders for the last three and a half decades. Their efficacy in controlling asthma symptoms and cost-effectiveness is well established worldwide 19, 20.

Their role in controlling symptoms, reducing exacerbations, improving lung functions and quality of life is undisputed 21, 22. Nowadays ICS are routinely being used in maintenance therapy in the management of asthma.

Concerns about side effects have been raised, but they have been proven to be efficacious and outweigh the risk of inadequately controlled asthma 23, 24, 25. Suppression of the hypothalamic-pituitary adrenal axis (HPA) is a benign physiological response to exogenous corticosteroids 26, 27, 28.

According to one of the recent study survey, 2% of health care givers reported at least one case of adrenal crisis associated with ICS 29. Yet another case series reported that the use of regular dose of budesonide with a MDI and a nebuhaler for 1 year was enough to cause symptomatic adrenal suppression 30.

Enrolment of patients and controls: The asthmatic patients participating in this study were from Mahavir Hospital and Research Centre, Hyderabad. The patients, 50 in number, with variable severity of asthma were enrolled for the study. Non-asthmatic volunteers 50 belonging to the same local population without any disease were enrolled as controls. An informed written consent was taken from all subjects recruited in this study. All the asthmatic subjects had specialist physician-diagnosed asthma with following three criteria:

Blood samples were freshly collected from each individual in EDTA vacutainers. For serum, 5 ml was taken, kept standing in a tube for a few minutes and centrifuged (R-8C-Lab Centrifuge, REM1) at 14,000 rpm for 10 minutes and serum was separated. Three aliquots were made from each whole blood and serum sample and stored at -80 C till further analysis.

All samples were taken between 8 and 10 am as they were to be analyzed for adrenal function. The samples for serum ACTH and Cortisol should ideally be drawn between this period due to circadian rhythm in their secretion and diurnal variation. Their blood levels peak between 8 and 10 in the morning reaching its lowest level by night.

Serum Cortisol Levels: All samples were run in duplicate. The correlation between serum cortisol levels in asthmatics and controls was not found to be significant (p= 0.43) (Figure 1).

Their mean values, standard deviations, standard error of means (SEM) and p value are given in table 1. 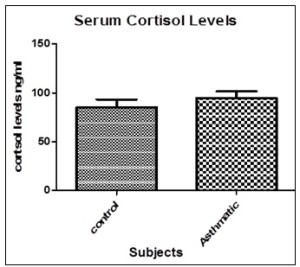 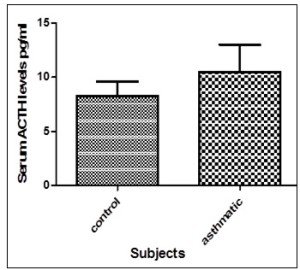 DISCUSSION: The randomly selected asthmatic patients visiting Mahavir Hospital and Research Centre, Hyderabad, for the follow up of their treatment were recruited for this study. A considerable number of patients reported a positive family history of asthma and/ or any other allergic condition. Seasonal exacerbations in their symptoms were high particularly in spring/winter though not many patients reported an allergy to pollens.

Hypothalamic pituitary adrenal axis was studied in these patients to see a possible suppression of the axis by inhaled corticosteroids. All of our patients reported taking inhaled steroids for the treatment of their symptoms, while none of them reported taking oral steroids. No significant difference in the cortisol and ACTH levels was observed between patients and controls.

One reason could be that the HPA axis is under influence of many factors including cytokine levels, stress and exogenous steroids that it is difficult to interpret the results on the basis of ICS only. Recently there has been a lot of stress on the methods used for the determination of HPA axis but so far none has been established as reliable in the diagnosis and this could be the other reason for no significant difference 31, 32. There are several tests measuring basal and dynamic cortisol and ACTH levels and different combinations have been explorein previous studies.

In our study we used a combination of cortisol and ACTH levels in the early morning samples.

CONCLUSIONS: Adrenal functions were normal in asthmatics as compared to the control population. This was probably due to multiple factors influencing their HPA axis including stress, cytokines and inhaled corticosteroids.

ACKNOWLEDGEMENTS: We are grateful to Mahavir Hospital and Research Centre for the facilities provided. Further, we thank the study group for Volunteering their Blood sample for carrying out this investigation.