INTRODUCTION: The association of hyperuricemia with preeclampsia has been known since 1917 1.Hypertension in pregnancy is a major cause of maternal death and also a major source of maternal and perinatal morbidity and perinatal mortality 2. Uric acid is a component of non-protein nitrogenous substances Asmallfraction of urates is loosely bound to plasma proteins. It is important to identify women who are high risk of developing the disease early in pregnancy 3.

Preeclampsia is a pregnancy specific syndrome of reduced organ perfusion secondary to vasospasm and endothelial activation. Proteinuria is an important sign of preeclampsia and rightfully concluded that the diagnosis is questionable in its absence. It can be defined as a multisystem disorder of unknown etiology characterized by development of hypertension to the extent of 140/90 mmHg or more with proteinuria induced by pregnancy after the 20th week 4.

Hypertensive disorders are important causes of premature delivery, IUGR and intra uterine fetal death. It accounts for 15% to 20% of maternal deaths in developing as well as developed nations 5. Pregnancy induced hypertension is defined as the hypertension that develops as a result of the gravid state and includes: Preeclampsia, Eclampsia and Gestational hypertension 6. Although the cause of preeclampsia remains unknown, evidence for it begins to manifest early in pregnancy with pathophysiological changes that gain momentum across gestation unless delivery supervenes. These changes ultimately result in multi-organ involvement with a clinical spectrum ranging from barely noticeable to life threatening for both mother and fetus. These adverse maternal and fetal effects develop simultaneously and presumably are a consequence of vasospasm, endothelial dysfunction and ischemia.

The myriad of maternal consequences of the preeclampsia syndrome are described in terms of organ systems, but they frequently overlap. It is enigmatic that there are such wide variations of involvement of these systems in individual pregnancies. Recently, because of uric acid’s role in vascular damage and in oxidative stress, hyperuricemia has been evoked as a contributor to the pathogenesis of preeclampsia 7, 8.

In normal pregnancy, serum uric acid level slowly decreases until about 16 weeks of gestation, secondary to plasma volume expansion, increased renal clearance, and the uricosuric effect of estrogen. For most of the 2nd trimester, the uric acid level remains stable, and then increases during the 3rd trimester because of increase catabolism/production 9.Interestingly, women with a history of preeclampsia also have a higher risk for cardiovascular disease and hypertension later in life 10, 11.

Uric acid levels correlate with plasma rennin activity 12, hyperuricemia predicts the development of hypertension in the general population 13. This   research work aims at measuring and evaluating serum uric acid in normal pregnant cases and in preeclamptic and eclamptic cases to see the trend in the rise of serum uric acid in toxemic cases when compared to the control group and comparative study with patients.

MATERIAL AND METHODS: A Total of 155 patients were registeredin the Department of Biochemistry, Rajendra Institute of Medical Sciences, Ranchi, during June 2008 to Sept.2009. The cases selected from outdoor, indoor and emergency of Dept. of   Obstetrics and Gynecology, RIMS The cases studied were 15, (Normal non pregnant healthy women) control.60-Normal pregnant women in different trimesters,60-Preeclamptic cases, 20-Eclamptic cases. Preeclampsia was divided into 3 groups. As diet has effect on serum uric acid level, the samples were to be collected in fasting state.

Hence, the patients were advised to fast overnight and if not possible then at least for 4 hours. In the morning between 8 A.M. to 10 A.M. 3ml of venous blood samples were collected by a dry sterilized syringe into a dry plain vial. The samples were allowed to clot for separation of serum. Then serum was centrifuged for 10 minutes at 3000 rpm. The clear supernatant serum was pipetted into a clean dry test tube for uric acid estimation. Estimation of uric acid by Uricase/Pap method supplied by crest biosystems a division of coral clinical system 14. Enzymatic conversion of uric acid and oxygen by Uricase to allantoin and hydrogen peroxide. Hydrogen peroxide and phenolic chromogens are converted by peroxidise to a red color compound, whose concentration is proportional to the amount of uric acid in the specimen and is read at 500 nm (range 492-550) the final color is stable for 15 minutes. Intensity of the color formed is directly proportional to the amount of uric acid present in the sample 15.

RESULTS: Preeclampsia is a major complication of human pregnancies, affecting 5-7% of pregnant women. Preeclampsia is characterized by an increase in vascular tone (vasospasm) that is frequently associated with enhanced platelet aggregation and therefore, reduced utero-placental flow. In addition, coupling of these factors with disturbed renal function worsens perinatal outcome. Preeclampsia usually is well established before the patient develops symptoms.

She may be aware of some puffiness of the fingers and face, which is common in normal pregnancy, but hypertension, proteinuria and increase in uric acid level in blood and decrease in clearance tests, may be present for days or weeks before she has any subjective complaints. Hence, the importance of perinatal care primary objective of which is the early detection of the signs and laboratory parameters in preeclampsia. Table 1 and figure 1 shows that the serum value of uric acid was studied in 60 preeclamptic cases and 20 cases of eclampsia.

Table 3 and figure 3 shows that the difference in uric acid concentration was not statistically significant when parity was compared. The groups were formed according to parity in normal pregnancy. The serum uric acid (mg %) in all these groups were obtained as follows in table (Results are expressed in terms of mean ± S.D. values t value & p value). In 1st gravid normal pregnant cases, mean was 3.52±0.02, and in 3rd gravid normal pregnant cases, it dipped down to the mean of 3.40±0.49. When compared, the difference in serum uric acid is not statistically significant when parity was compared.

Table 5 and figure 5 shows that the gradual fall of serum uric acid levels towards lower values after parturition in each group of case. Mean value of serum uric acid during pregnancy in eclamptic cases was 9.55±0.95 and after 6-12 hours after delivery, it was 6.90±1.17. The different between the two group show the p-value <0.01, which was statistically significant.

TABLE 2: ANALYSIS OF THE ABOVE DATA IN TABLE 1

The difference in uric acid concentration is not statistically significant when parity is compared.

TABLE 4: SHOWS ANALYSIS OF THE SERUM URIC ACID IN MG% IN DIFFERENT AGE GROUP OF PATIENTS

TABLE 5: SHOWING THE CHANGING PATTERN OF SERUM URIC ACID CONCENTRATION IN ECLAMPTIC CASES DURING PREGNANCY AND AFTER DELIVER (6-12 HOURS) 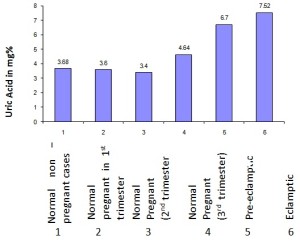 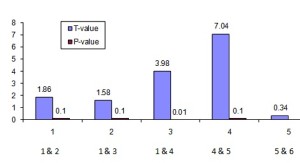 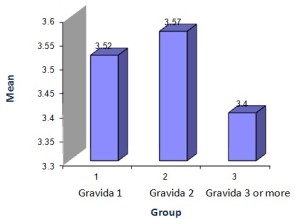 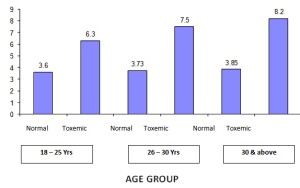 FIGURE 4: ANALYSIS OF THE SERUM URIC ACID IN mg% IN DIFFERENT AGE GROUP OF PATIENTS 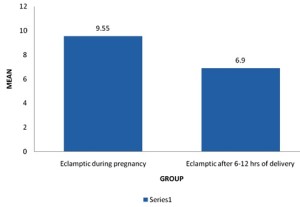 FIGURE 5: SHOWING THE CHANGING PATTERN OF SERUM URIC ACID CONCENTRATION IN ECLAMPTIC CASES DURING PREGNANCY AND AFTER DELIVERY (6-12 HOURS) 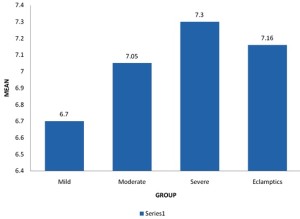 DISCUSSION:   In the present study, estimation of serum uric acid was done in normal pregnant women and patients with pregnancy induced hypertension (i.e. Preeclamptic and Eclamptic patients). The assessment of the severity of the toxemia of pregnancy was based on the clinical examination of the patients and presence of proteinuria. For the diagnosis of preeclampsia, till date, two of the three factors should be essentially present viz. Hypertension to the extent of 140/90 mmHg or more with edema or proteinuria or both, induced by pregnancy after 20th week of gestation.

In only rare circumstances, do the Preeclamptic features appear before the 20th week as in cases of hydatiform mole and acute polyhydraminos. Serum uric acid, as has been well documented by past workers and confirmed in the present study is definitely raised in toxemia of pregnancy. Also, one of the latest concept is increase in oxidative stress (due to ischemia) when there is more formation of free radicals than the body defense system can handle. This leads to tissue breakdown. When purine component of nucleic acid breaks down, there were increased formations of uric acid.

In the present work, it was established whether the biochemical marker, serum uric acid level can be used as a screening test to predict the later development of the disease. Plasma uric acid levels constitute a better indicator than blood pressure as prognosis for fetal outcome16.

The assessment of the severity of the toxemia of pregnancy is based on the clinical examination of the patients and proteinuria. But these did not give much clue regarding the systemic damage caused by the disease. The clearance values of endogenous creatinine and serum uric acid estimation has been long considered as an accurate index for the early diagnosis of toxemia of pregnancy and in evaluating fetal and maternal prognosis in such cases.

In the present series, study of serum uric acid level in non-pregnant was done not only to compare the results with other series, but also to regard our figures as control. In the present study, the mean for serum uric acid was 3.68± 0.606 while this value was differing from HAWKE and BERGIM value, 2.95mg/dl 17.

In the age group (26-30 yrs.), the mean Serum uric acid level in normal control cases was 3.73 ± 0.75 and in age group 30 yrs. And above, the mean serum uric acid value was 3.8 ± 1.1. The difference between the above group increases with the increase in age but was not statistically significant.

ACKNOWLEDGEMENTS:   We are really thankful to all subjects and for guidance Dr. Ajit. Without their big support and guidance it would not have been possible to have done this work.