Background: Cervical cancer (CC) is the second leading cause of cancer deaths in women, with more than 80% of these occurring in developing countries that have limited access to screening programs. Therefore there is a need to develop diagnostic and prognostic biomarkers which can be quantifiable and help clinical oncologists at the first interaction with the suspected patients. The aim of this study was to correlate the serum markers with the diagnosis of distant metastasis, disease recurrence, therapy monitoring and prognosis of the cervical cancer.

Methods: The study group consisted of 50 metastatic cervical cancer patients and 50 benign cervical cancer patients in the age group of 20-80 years. Blood samples (5ml) were collected for analysis after Informed consent was obtained from each patient prior to sample collection. The markers (CEA and CA125) were analyzed by ELFA and sandwich ELISA methods respectively and compared to their reference values.

Results and conclusion: Statistical analysis of the results showed that the incidence of the disease showed a direct correlation with the age of the patients. The study also confirmed that elevated serum CA125 and CEA levels warranted further clinical management. It is concluded that CA125 and CEA are useful tumor markers not only for patients in clinical remission following treatment but also as prognostic and diagnostic biomarkers.

INTRODUCTION: Cervical cancer (CC) is the second most common cancer and predominant gynecological cancer in women, causing most cancer related deaths world over 1. In developing countries cervical cancer is the second leading cause of cancer deaths in women, with more than 80% of these occurring in places where they have limited access to screening programs.

It has been reported that 12,170 women developed cervical cancer, and about 4,220 women died of cervical cancer in the United States during 2012 (http://www.cancer.org/). And in China, the mortality rate of cervical cancer ranged from 2 to 4 per 105 population in urban areas, 0 to 7 per 105 population in rural areas during the period of 1996 to 2005 2. It is a leading cause of cancer mortality, affecting mainly the under developed populations of sub-Saharan Africa, Central and Latin America, and South-Central Asia 3. In India, cervical cancer kills a woman every seven minutes. In Tamil Nadu, cervical cancer is the second most common cancer affecting women, especially those in rural areas, whereas in other states the data was not available. Eighty per cent of women in the low socio-economic strata in India are at risk owing to the lack of awareness regarding the disease and the services available to combat the disease, some statistics which were available are listed below:

Remarkably, it generally takes about ten years to arise from precancerous lesion to invasive cervical cancer. For this reason, the effective screening of precursor lesion is of great importance, which makes cervical cancer preventable and curable. Cytological examination and HPV test are the most widely applied screening methods for CC and its precursor (cervical intraepithelial neoplasia, CIN) lesion. Regular Papanicolaou (Pap) tests are an excellent diagnostic tool for detecting not only cancerous, but also precancerous cells, both of which can be treated or removed 4, 5. Previous observational studies have consistently shown dramatic reductions in the cervical cancer mortality rate after the implementation of population-based screening programs 6, 7.

Among the several factors that contribute to the incidence of CC the most predominant aetiological factor for cervical cancer is persistent infection of certain high-risk types of human papilloma viruses (HR-HPVs),8 while low risk types are associated with benign cervical lesions and genital warts 9, 10. HPV has also been detected in a significant proportion of oral, oesophageal, anal, vaginal, vulvar, and penile cancer and in a small percentage of lung, laryngeal, and stomach cancer, as has been shown in some parts of the world 11. It is also believed that early age of marriage, multiple sexual partners, multiple pregnancies, poor genital hygiene, smoking and use of oral contraceptives are also the causes for cervical cancer.

Generally the treatment options for CC are based on the evaluation of the clinical stage of tumor according to the classification of the International Federation of Gynecology and Obstetrics (FIGO). For early-stages (FIGO I-IIA) either surgery or radiotherapy (RT) is employed, whereas for late-stages (FIGO IIBIV) chemotherapy is indicated 12. Despite the promising results achieved in the last decades with the screening of asymptomatic women by Pap smears and more recently with the advent of vaccines against HPV, CC is still a common disease with about 530,000 new cases and 275,000 deaths per year 13.

Biomarkers are now being used before diagnosis for screening and risk assessment and during diagnosis especially in cancer cases and they can be used to determine staging, grading, and selection of initial therapy 14, 15. It is known that a biomarker is either produced by the diseased organ (e.g., tumor) or by the body in response a disease. Hence biomarkers are potentially useful along the whole spectrum of the disease process.  Several clinicians have used biomarkers to monitor therapy, select additional therapy, or monitor recurrent diseases 16, 17.

Oncology biomarkers are defined as easily accessible and measurable biologic substances for screening and monitoring of occult tumors 18. The aim of this investigation was to determine biomarkers for the management of gynecologic cancers which could be used for differential diagnosis between malignant and benign tumor specimens, to monitor and predict responses to treatment, and to detect early stage or occult recurrent diseases. While CA125, CA19-9 and CEA are established biomarkers in patients with gynecologic malignancies 19, the most commonly used serum biomarkers for monitoring disease progression are CA125 and hCG. Hence we propose to determine these biomarkers in cervical cancer. Also, we propose to determine these biomarkers in CC, and to study the role of serum tumor markers (CA125 and CEA) in assessing the progress of disease which may help in treatment for CC in the south Indian population.

Study group: The study population included fifty metastatic cervical cancer patients and fifty benign cervical cancer patients in the age group of 20-80 years. Blood samples (5ml) were collected and centrifuged to separate the serum. The serum samples were stored in -20oC till further analysis. Informed consent was obtained from each patient prior to sample collection. The markers (CEA and CA125) were analyzed by ELFA and sandwich ELISA methods respectively. Patient’s data were collected from the case files of the Department of Oncology.

ELISA Test: The CA125 ELISA test is based on the principle of a solid phase enzyme linked immunosorbent assay. The assay system utilizes a polyclonal anti-CA125 antibody directed against intact CA125 for solid phase immobilization on the micro titer wells. A monoclonal anti-CA125 antibody conjugated to horseradish peroxides (HRP) is in the antibody-enzyme conjugate solution. The test sample was allowed to react first with the immobilized polyclonal antibody. The wells were washed to remove any unbound antibody. The monoclonal-HRP conjugate reacted with the captured antigen, resulting in the CA125 molecules being sandwiched between the solid phase and enzyme-linked antibodies.

Correlation of age with the incidence of cervical cancer: Our study included 50 patients with metastatic cervical cancer and 50 benign cervical disease belonging to different age groups. The diagnosis of metastatic and benign cervical cancer was confirmed by the results of CT scan and biopsy. These results were obtained from histopathology department. The serum markers levels of the patients were analyzed by ELISA and ELFA tests. The patients who were tested positive for the markers were categorized according to their age under four age groups as represented in table 1 below: 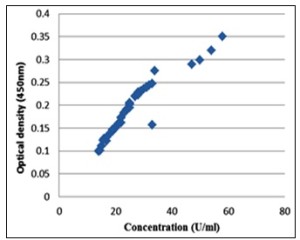 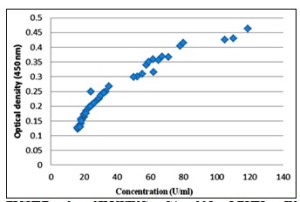 After the treatment all the 15 cases showed that the level of CA125 had come down to Normal values i.e. <35U/ml as shown in fig. 3. 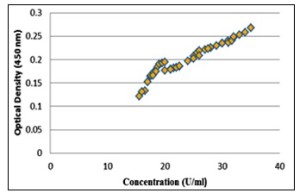 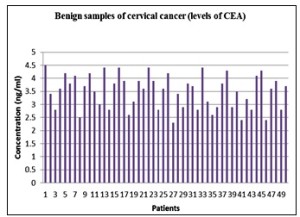 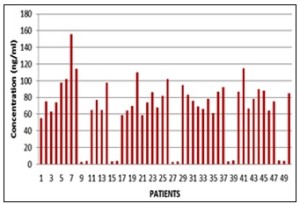 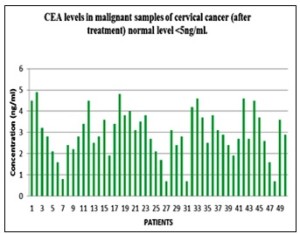 DISCUSSION: Carcinoembryonic antigen (CEA)is a 200 kDa glycoprotein, isolated first by Gold and Freeman in 1965 20 using an antibody rose in rabbits by injecting an extract of human colonic carcinoma. Elevated levels were found in patients with colorectal, breast, lung, or pancreatic cancer 21, and also in smokers 8. The first success in developing a blood test for CEA was in 1965, when the antigen was detected in the blood of some patients with colon cancer.

Blood levels of CEA are also elevated in many other cancers such as those of the thyroid, pancreas, liver, stomach, prostate, ovary, and bladder8. Post-operative normalization of serum CEA level has been reported to be a favorable prognostic indicator in lung cancer and the identification of abnormal pre- and post-operative serum CEA levels may be useful in the auxiliary cancer prognosis or postoperative surveillance of colorectal cancer patients 22.

Out of 50 cases in our study in metastatic cervical cancer only 15 cases had shown an elevated level of CA125, but 40 out of 50 cases had shown an elevated level of CEA. These results have shown that CEA is a useful or better biomarker in diagnosing cervical cancer. However, despite a specificity of 90%, in cervical cancer CEA sensitivity as a single marker does not exceed 15% 23, 24. The combination of CA-19-9, CA125 and CEA improves the sensitivity but on multivariate analysis only CA125 appears as an independent marker 25. Finally, the addition of CEA does not significantly increase the sensitivity obtained by using SCC alone 26. Thus to date, SCC still remains the tumor marker of choice in squamous tumors.

CA125 appeared more sensitive than SCC-Ag for cervical adenocarcinomas. It also serves as an important prognostic factor and an implicit indicator of tumor virulence 23. CA125 used in combination with CA19-9 can increase the sensitivity to 60%, and up to 70% when combined with both CEA and SCC-Ag 25. Finally, steady decrease of CA125 levels during treatment for cervical carcinoma correlates with chemosensitivity in 83% of patients 28.

From these data, it is evident that CEA is more significant than CA125 for both diagnosing and monitoring the progress of the treatment in CC.

However, both the biomarkers should be routinely used together in diagnosis to rule out false positives.

CONCLUSION: Tumor markers play a key role in the care of patients with the cervical cancer. Serial determination of the markers such as CEA and CA 125 can be used in aiding diagnosis of distant metastasis, determination prognosis, prospectively predicting response or resistance to specific therapies, surveillance after primary surgery, and monitoring therapy in patients with advanced disease. The tumor marker levels are often measured over a period of time to see if the levels are increasing or decreasing. Usually these “serial measurements” are more meaningful than a single measurement.

Tumor marker levels may be checked at the time of diagnosis; before, during, and after therapy; and then periodically to monitor for recurrence. The levels in the serum of the patients can be analyzed by enzyme linked fluorescent assay (ELFA) and enzyme linked immunosorbent assay (ELISA) respectively. From the results it can be said that the incidence of the disease had shown a direct correlation with the age of the patients. The study also confirmed the validity of serial CEA assay in the diagnosis of metastatic cervical disease and monitoring cervical cancer patients.

ACKNOWLEDGEMENT: We are grateful to the Oncologists and Pathologist who helped us with sample collection, and we thank the patients/study group for their cooperation. We thank Bhagwan Mahavir Medical Research Centre for the facilities.