A Simple, Sensitive, Precise, and specific reverse phase high performance liquid chromatographic method has been developed for the determination of lymecycline in pharmaceutical Dosage Forms. Chromatographic separation was achieved on a PLRP-S (250×4.6 mm), 8.0 µm make: Varian column with a 11.5:10:20:1:57.5 mixture of 2-Methyl-2-propanol,3.5% w/v  di-potassium hydrogen  phosphate, 1.0% w/v Tetra butyl ammonium hydrogen sulphate, 4.0% w/v di -sodium edetate and JT Baker water as mobile phase, detection was at 254 nm. Response was a linear function of concentration in the range 5-0.02 mg/L for lymecycline; correlation coefficient was 0.9998, respectively. LOD and LOQ for lymecycline were found 0.02 mg/L and 0.05 mg/L. Accuracy (recoveries 95-97%) and reproducibility were found to satisfactory.

In this paper, we described a simple, sensitive, and validated RP-HPLC method for determination of lymecycline in pharmaceutical Dosage Forms. The method has been successfully used for quality control analysis of the drugs and other analytical purposes. 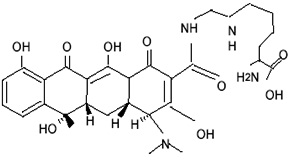 Preparation of Standard Solution: Accurately weighed 1.02mg of reference standard of Lymecycline in 100ml volumetric flask and the volume was brought upto the mark using diluent.

Method Validation: Once the HPLC method development was over, the method was validated in terms of parameters like specificity, press ion, accuracy, linearity and range, LOD, LOQ, raggedness, robustness, stability etc. For all the parameters percentage relative standard deviation values ware calculated. The proposed HPLC method was validated as per ICH guidelines 5, 6, 7.

Linearity and Range: Different known concentrations of lymecycline (5.0 mg/L – 0.02 mg/L) were prepared in diluent by diluting the stock solution.  Injected the standard solutions and measured the peak area. A calibration curve has been plotted for concentration of the standards injected versus area observed and the linearity of the method was determined from the correlation coefficient. The results were shown in (Table 2).

Precision: Precision was evaluated by carrying out three independent sample preparation of a single lot of formulation. The sample solution was prepared in the same manner as described in the sample preparation. Percentage relative standard deviation (% RSD) was found to be less than 1% for within a day and day to day variations, which proves that that method is precise. Results were shown in (Table 3-4).

Accuracy: Tostudy the reliability, suitability and accuracy of the method recovery experiments were carried out. A known quantity of the pure drug was added to the preanalysed sample formulation at the level of 50% and 100%, dissolved in diluents and made up to 100ml with same solvent. Further dilutions were made so that the each aliquot contained 0.05mg/L of lymecycline. The contents were determined from the respective chromatograms. The concentration of the drug product in the solution was determined using assay method. The recovery procedure was repeated 10 times and % RSD was calculated by using the following formula. The contents of lymecycline per tablet found by proposed method are shown in (Table 3); the lower values of RSD of assay indicate the method is accurate. The mean recoveries were in range of 95-97 % which shows that there is no interference from excipients (Table 5).

Repeatability of Solution: A standard solution of drug substance was injected ten times and corresponding peak areas were recorded. The % RSD was found to be less than 1 % (Table 6).

Specificity: Condition of HPLC method like percentage of organic solvent in mobile phase, ionic strength, pH of buffer flow rate etc, was changed. In spite of above changes no additional peaks were found, although there were shift retention times or little changes in peaks shapes.

Assay: 20µl of standard and sample solutions were injected into an injector of RP-HPLC, from the peak area of standard amount of drug in sample were computed. The values are given in Table 7.

Ruggedness and Robustness: The ruggedness of the method was determined by carrying out the experiment on different instruments like Shimadzu HPLC and Agilent HPLC by different operators using different columns of similar types. The %RSD values with two different instruments Shimadzu HPLC and Agilent HPLC, analyst and columns were 0.5-0.5, 0.6-0.5 and 0.4-0.3% respectively. Robustness of the method was determined by making slight changes in the chromatographic conditions, such as changes in mobile phase, flow rate and column temperature. It was observed that there were no marked changes in the chromatograms, which demonstrated that the RP-HPLC method is rugged and robust. The robustness limit for mobile phase variation, flow rate variation, and temperature variation are well within the limit, which shows that the method is having good system suitability and precision under given set of conditions and were within the acceptance criteria of not more than 2%.

RESULTS AND DISCUSSIONS: UV spectrum of lymecycline was recorded from which 254nm was selected as wavelength. Flow rate of 1ml/min was selected 11.5: 10: 20: 1: 57.5 mixture of 2-Methyl-2-propanol, 3.5%w/v di-potassium hydrogen  phosphate, 1.0%w/v Tetra butyl ammonium hydrogen sulphate, 4.0%w/v di-sodium edetate and JT Baker water was selected as mobile phase. The retention time was found to be 8.0min.Lymecycline shown linearity in the range of 0.02-5mg/L and the co-efficient was found to be 0.9998.

Recovery studies were performed at 50 and 100% levels. The sensitivity of method LOD and LOQ is shown in (Table 2). The stability at room temperature and refrigeration was found to be 3 and 8.5 hrs respectively. Hence the proposed method is simple, accurate, and rapid and can be employed for routine analysis. The low standard deviation and good percentage recovery indicates the reproducibility and accuracy of the method. 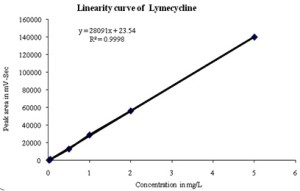 Regression analysis of the calibration curve for lymicycline showed a linear relationship between the concentration and peak area with correlation coefficients higher than 0.9998 in all curves assayed.

Repeatability of injection was performed using 0.5mg/L sample for 10 times and corresponding peak areas were recorded. The % RSD peak was reported.

Analysis of formulation was performed using Lymecycline 408 mg tablets and the claim was found to be 98.

CONCLUSION: A convenient and rapid RP-HPLC method has been developed for estimation of Lymecycline in tablet dosage form. The assay provides a linear response across a wide range of concentrations. Low intra-day and inter-day % RSD coupled with excellent recoveries. The proposed method is simple, fast, accurate and precise for the simultaneous quantification of Lymecycline in dosage form, bulk drugs as well as for routine analysis in quality control.