ABSTRACT: Simple, sensitive, cost-effective and selective methods are designed and developed for the oxidative indirect spectrophotometric determination of drugs and pharmaceuticals, viz., Argatrobane Monohydrate (ARG), Bortezomib (BOR), Chloroquine Phospate (CHP), Granisetron HCl (GRA), Ibandronate Sodium (IBA) based on their reactivity towards n-bromo succinamide (NBS in excess). The method is based on the oxidation of drugs by n-bromo succinamide (excess) and estimating the amount of un-reacted NBS by Methyl Orange dye at λmax 508 nm. The calibration curves obeyed Beer’s law over the concentration range of 10-70 µg mL-1 (ARG), 8-56 µg mL-1 (BOR), 6-42 µg mL-1 (CHP), 4-28 µg mL-1 (GRA) & 5-35 µg mL-1 (IBA). This method has been applied for the determination of drugs in their pure form as well as in tablet formulations. Statistical analysis of the results using Student’s t-test for accuracy and F-test for precision revealed no significant difference between the proposed methods and the literature method at the 95% confidence level with respect to accuracy and precision. The method has been validated in terms of guidelines of the International Council of Harmonization. 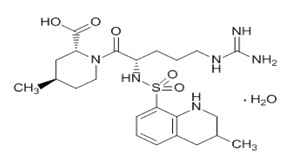 Argatroban is capable of inhibiting the action of both free and clot-associated thrombin 1. Several methods are known for the quantitative determination of ARG 2-8.

Bortezomib: Bortezomib is a novel cytotoxic chemical entity that potently and specifically inhibits the proteolytic activity of the proteasome and thus the degradation of poly-ubiquitinated proteins destined for catalysis by the proteasome. Bortezomib is a modified dipeptidyl boronic acid derived from leucine and phenylalanine. The chemical name for bortezomib, the monomeric boronic acid, is [(1R)-3- methyl-1-[[(2S)-1-oxo-3-phenyl- 2- [(pyrazinyl carbonyl) amino] propyl] amino]butyl]boronic acid, Fig. 2 9. 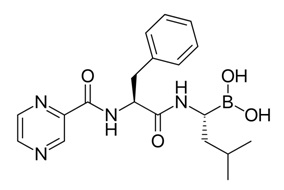 Because of its physiological significance, it has been quantified by several methods which are enumerated in the recent reference 10-16.

The drug is also prescribed to decrease the symptoms of rheumatoid arthritis and to treat systemic and discoid lupus erythematosus in adults 17. Determination of chloroquine concentrations in biological samples is important for several reasons, such as assessment of patient compliance, evaluation of pharmacokinetic data and prevention of toxic blood concentrations after prolonged use, especially in the case of treatment of rheumatoid arthritis. Reliable analysis methods are also required for quality control of chloroquine preparations.

Other analytical methods reported for the assay of CLQ in pharmaceuticals include visible spectrophotometry 18-21, spectrofluorimetry 22, high-performance liquid chromatography 23-25.

Granisetron Hydrochloride: Granisetron hydrochloride (as shown in Fig. 4) is an effective and potent antiemetic drug which is used in the treatment of vomiting and nausea resulting from cancer chemotherapy and radiotherapy in adults and children. Granisetron hydrochloride is also effective in the management of postoperative nausea and vomiting due to the anesthetics 26, Chemically, it is endo-N(9-methyl-9- azabicyclo [3.3.1] non- 3- yl)- 1- methyl- 1H- indazole- 3-carboxamide hydrochloride. GTH selectively blocks type 3 serotonin (5-HT3) receptors, is an antinauseant, antiemetic and specific selective serotonin 5-HT3 receptor antagonist Fig. 4. The molecular formula is C18H24N4O•HCl and its molecular weight is 348.9. 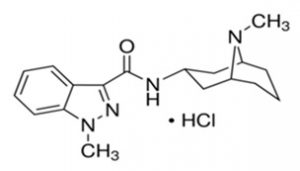 A few analytical methods viz; RP-HPLC 27, 28, HPTLC 29, and spectrophotometry 30, 31 have been developed for the determination of phenylephrine hydrochloride. The aim of this study is to develop simple, selective, accurate, precise and sensitive stability-indicating UV method for the determination of Granisetron hydrochloride in bulk and in pharmaceutical dosage forms (tablets) suitable for routine quality control analysis.

Ibandronate Sodium: Ibandronate sodium (IBA) is one of the nitrogen carrying Bisphosphonate. According to IUPAC nomenclature it is 3-(N-methyl-N-pentyl) amino-1-hydroxypropane-1, 1-diphosphonic acid, sodium salt, monohydrate Fig. 5. It prevents osteoclast-conciliate boneresorption 32. It is precious for the cure of hypercalcemia of malignancy 33, Paget's disease, postmenopausal osteoporosi and corticosteroid-induced osteoporosis metastatic bone disease 34.

Materials and Reagents: All the reagents used were of analytical reagent grade and distilled water was used throughout the investigation. NBS solution (0.01%) was prepared by dissolving N-bromosuccinimide (Himedia Laboratories Pvt. Ltd, Mumbai) in water with the aid of heat and standardized. The solution was kept in an amber-colored bottle and was diluted with distilled water appropriately to get 70 μg mL–1 NBS for use in the spectrophotometric method.

The pharmaceutical grade drugs were supplied by Arabindo pharmaceuticals and hetero drugs Pvt. Ltd Hyderabad. A stock standard solution of drugs was prepared by dissolving accurately weighed 10 mg of pure drug in water and diluting to 100 mL in a calibrated flask with water. The solution was diluted stepwise to get working concentrations.

Assay Procedure: Aliquots containing 2-70 µg mL-1 of the drug were transferred into a series of 10 mL standard flasks using a micro burette. To this, 1 mL of NBS was followed by 1 mL of 1M HCl and contents were shaken well. After 30 minutes, 1 mL of methyl orange dye added to the content. Then contents were shaken well and diluted up to the mark. The absorbance of each solution was measured at 508 nm against the corresponding reagent blank. 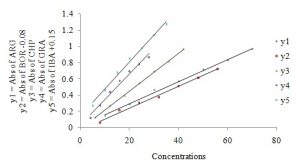 FIG. 6: CALIBRATION CURVES OF THE DRUGS

Procedure for Assay of Pure Drug: Sample solutions of each drug in the beer’s law limits were chosen and recovery experiments were performed to check the accuracy and precision. The concentration chosen and recovery are tabulated in Table 2. For this purpose, the standard deviation method also adapted. Excellent recovery and % RSD being less than 2 speaks about the precision and accuracy of the method Table 1.

TABLE 1: DETERMINATION OF ACCURACY AND PRECISION OF THE METHODS ON PURE DRUG SAMPLES

Argatroban monohydrate injection is a sterile non-pyrogenic, clear, colorless, to a pale yellow isotonic solution. It is available as a single-use polyolefin bag containing 250 mg of argatroban in 250 ml sodium chloride solution (1 mg/ml). Convenient aliquots were taken from this for the determination of argatroban.

Bortezomib: For the analysis of pharmaceutical formulations ten tablets (Velcade, 3.5mg) were weighted, powered and equivalent to 10 mg of Bortezomib was transferred into 100 mL volumetric flask. 60.0 mL of distilled water was added and ultrasonicated for 20 min, then made up to the mark with distilled water. The resulting solution was mixed and filtered through Whatman filter paper no. 42. From the filtrate, the solution was diluted appropriately with distilled water in order to obtain the working concentration of drug used for the analysis.

Chloroquine Phosphate: Ten tablets of (Kamquine 150mg) were weighed accurately and powdered. The powder equivalent to 50 mg of CHP was transferred into a 100 mL volumetric flask, containing a mixture of distilled water (10.0 mL) and HCl (2.0 mL). The flask was shaken for 5 mints and the solution was filtered using Whatman no. 41 filter paper and further diluted with water to obtain a working standard solution.

Granisetron Hydrochloride: About ten to fifteen tablets (Kytril, 2mg) were powdered and equivalent to about 10 mg of Granisetron hydrochloride had been taken into a 100 ml of volumetric flask and dissolved in 40 ml of distilled water by using 0.5M HCl. This solution was t filtered through Whatman filter paper no. 42. The residue was dissolved in 100 mL of distilled water. It was used as a stock sample solution. The aliquot portions of this stock solution were further diluted with distilled water to get the final concentration required for the determination of the drug.

Ibandronate Sodium: Two tablets (Bondria, 150 mg) were weighed accurately and grounded. A quantity equivalent to 20mg of Ibandronate Sodium was weighed and transferred into a 100ml calibrated flask and the volume was finally diluted to the mark with water, mixed well and filtered using a Whatman no. 42 filter paper. It was used as a stock sample solution and was further diluted with water to get a working solution.

RESULTS AND DISCUSSION: Each method developed for quantification of drugs has been validated in terms of precision, accuracy, the limit of detection, the limit of quantification, linearity, selectivity, and ruggedness. Beer’s law limits, slope, intercept, correlation coefficient, Sandell’s sensitivity and regression equations for each drug are tabulated in Table 2. To assess the precision each experiment was repeated at least 6 times and accuracy is estimated in terms of percent recovery and percent RSD. Excellent percent recovery and RSD is less than 2 for each drug demonstrates the accuracy and precision of the methods.

Effect of Acid Concentration: To study the effect of acid concentration, different types of acids were examined (H2SO4, HCl, and H3PO4 and CH3COOH) to achieve maximum yield of Redox reaction. The results indicated that the hydrochloric acid was the preferable acid with NBS as oxidant. The reaction was performed in a series of 10 mL volumetric flask containing 8.0 μgmL-1 of the cited drugs, different volumes (0.5-2.5 mL) of 1M HCl and 1 mL of NBS (0.01%) were added. After 5.0 min of heating time at 60 ± 2 °C in a water bath, the solution was cooled for about 3.0 min, 1 mL of methyl orange dye were added, then complete to 10 mL total volume with water.

Effect of Heating Time: In order to obtain the highest and most stable absorbance, the effect of heating time on the oxidation reaction of drugs were catalyzed by heating in a water bath at 60 ± 2 °C for the periods ranging for 5-10 min. the time required to complete the reaction and maximum absorbance were obtained after 5.0 min of heating. After the oxidation process, the solution must be cooled at least for 3.0 min before addition of dye.

Effect of Oxidant Concentration: When a study on the effect of NBS on color development was performed, it was observed that in both cases the absorbance increased with increase in the volume of NBS. It reached maximum when 1 mL of 70 µg mL-1 NBS   solution was added to a total volume of 10 mL for drugs solutions. The color intensity decreased above the upper limits. Therefore, 1 mL of 70 µg mL-1 NBS was used for all measurements.

Effect of Dye Concentration: In order to ascertain the linear relationship between the volume of added NBS and the decrease in absorbance of Methyl Orange dye, experiments were performed using 1 mL of 1M HCl with varying volumes of NBS. The decrease in absorbance was found to be linear up to the 1 mL of NBS with the optimum volume of 1.0 mL of methyl orange dye for fixed concentration drug solution. The color was found to be stable up to 24 h.

Statistical analysis of the results using Student’s t-test for accuracy and F-test for precision revealed no significant difference between the proposed methods and the literature method at the 95% confidence level with respect to accuracy and precision Table 4.

TABLE 3: RESULTS OF ASSAY OF TABLETS BY THE PROPOSED METHODS AND STATISTICAL EVALUATION AND RECOVERY EXPERIMENTS BY STANDARD ADDITION METHOD

Recovery experiment was performed via standard addition technique to ascertain the accuracy and validity of the proposed methods. To a fixed and known amount/concentration of drug in tablet powder, the pure drug was added at three levels (50, 100 and 150% of the level present in the tablet) and the total was found by the proposed methods. Each experiment was repeated six times and the percent recovery of pure drugs added was within the permissible limits showing the absence of interference by the inactive ingredients in the assay.

CONCLUSION: This is simple, rapid, and cost-effective methods for the determination of drugs have been developed and validated. The proposed method is more sensitive and the methods depend on the use of simple and cheap chemicals and techniques but provide sensitivity comparable to that achieved by a sophisticated and expensive technique like HPLC. Thus, they can be used as alternatives for rapid and routine determination of bulk sample and tablets.

ACKNOWLEDGEMENT: The authors are thankful to the Head, Department of chemistry, University College of Science, Osmania University, Hyderabad, Telangana - 500007 India.