INTRODUCTION: Etodolac (ETO) (R, S)-2-[1, 8-diethyl-1, 3, 4, 9-tetrahydro-pyrano-(3, 4-b)-indole-1-yl] acetic acid (Fig. 1a), is a cyclo-oxygenase inhibitor used as an analgesic to reduce pain in arthritis 1. ETO also used in the therapy of postoperative pain and rheumatic diseases2. Paracetamol (PA), N-(4–hydroxyphenyl) acetamide (Fig. 1b), is a widely used analgesic and antipyretic agent throughout the world. However, the indications for PA are limited, especially in the post-operative setting, because of its poor solubility which prevents its use in a soluble dosage form for parenteral administration3; it is official in USP, BP and IP 4-6. 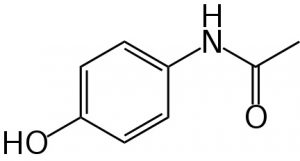 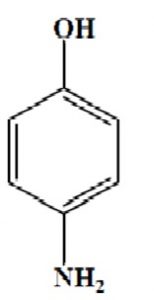 ETO and PA combination is especially used for the arthritis and pain however with these combination minor side effects like nausea and headache are reported. High Performance Thin Layer Chromatographic 9-11, spectrophotometric 12-14 methods for determination of PA either in single or in combination with other drugs was reported. Analytical methods have been reported for the determination of ETO includes Spectrophotometric 15-17 and HPLC 18-19 as single component or in combinations with other drugs. ETO and PA combination was developed by using HPLC 20 and HPTLC from spiked human plasma 21, by using this method one cannot separate PAP with PA. To our knowledge there is no report for separation of ETO, PA and toxic impurity PAP. Our main piece of work is to develop simple, sensitive and accurate analytical methods for the determination of ETO, PA and toxic impurity of PAP in their binary mixture and pharmaceutical formulation with satisfactory precision for good analytical practice (GAP). HPTLC technique can be performed in a short period of time and requires less mobile phases and allows the simultaneous analysis of large number of samples, this property of the HPTLC has advantage over the techniques because the separation of either multiple samples or a single sample takes the same time.

Instrumentation: An online automatic sample applicator equipped with 100μL syringe (Camag Linomat 5, Switzerland) and TLC scanners 3 were employed for preparation and measurement of TLC plates, respectively. Both of the scanner and densitometer were controlled using win CATS software, version 1.4.3. A UV lamp with short wavelength 254nm was used for visualization of the TLC plates. A double beam UV–visible spectrophotometer model UV-2100 (RAYLEIGH, China) connected to PC with UV-2100 operation software. D1 measured spectra was obtained by using accompanying software with = 5 and scaling factor =10 using methanol as a blank.

Samples of etogesic-P tablets (Zydus); batch no. BP/ET/F1/00, labeled to contain 400 mg ETO and 500 mg PA per tablet were purchased from local market.

HPTLC conditions: The HPTLC plates were developed with toluene: acetone: methanol: glacial acetic acid (6:2:1:0.5 v/v) as mobile phase. For detection and quantification 0.5 to 4.0 µl of ETO and 0.5 to 3.0 µl of PA were applied as separate bands 15 mm apart and 10 mm from bottom of the plate using 100 µl syringes. Linear ascending development of the plate was carried out to a distance of 8.5 cm. After complete development, the plate was dried with blower and scanned at 254 nm.

For HPTLC method: 50-400 ng µL⁻¹conentration of ETO and 50-300 ng µL⁻¹ concentration of PA were applied to the HPTLC plates. The plate was developed using previously described mobile phase. Calibration curves were constructed by plotting the integrated peak area versus the corresponding concentrations of each drug and regression equation parameters were calculated.

For UV derivative spectrophotometry (D1) method: For UV derivative spectrophotometry different dilutions equivalent to 25-125µg of ETO and 25-125µg of PA working solutions (10µg mL⁻¹ in methanol) were accurately transferred into a series of 10mLvolumetric flasks then diluted to volume using methanol. Calibration curves were obtained by plotting the peak amplitude at 217 and 236 nm versus the corresponding concentration of ETO (2.5-12.5µg mLˉ¹) and PA (2.5-12.5µg mLˉ¹) respectively.

Sample preparation: A total of twenty etogesic P tablets were accurately weighed and crushed to a fine powder. An amount equivalent to one twentieth of the tablet (containing 20 mg of ETO and 25 mg of PA) was taken, extracted with 30 mL of methanol, the mixture was transferred into a 100 mL volumetric flask through a whatman No. 40 filter paper. The residue was washed repeatedly with methanol, by combining the filtrate and washings were made up to the mark with methanol to a final concentration of 200 ng µL⁻¹of ETO and 250ng µL⁻¹ of PA.

Method validation: The method was validated in accordance with ICH (International Conference on Harmonization) guidelines (ICH, 1994, 1996). The following parameters were determined for validation of the developed methods.

Sensitivity: The sensitivity of both the methods was determined by measuring the limit of detection (LOD) and limit of Quantitation (LOQ). Various validation parameters are summarized in Table 3. Specificity: The specificity of the method was estimated by analyzing standard drug and sample (Fig. 2) 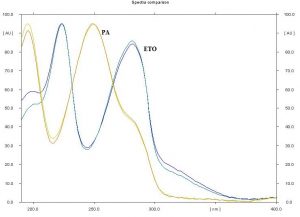 Robustness: HPTLC–densitometric method: It was determined by changing the parameters like the time from application to development and time from development to scanning and temperature& RH.

For UV derivative spectrophotometry (D1) method: It was determined by changing the parameters like temperature, RH and the experiment was performed by other analyst and by using other instrument from different manufacturer. The results were shown in Table 6.

HPTLC method: A laboratory prepared mixture of ETO, PA and PAP is used to investigate the optimum separation conditions. Developing systems of various compositions and ratios were tried chloroform–methanol (8:2, v/v), chloroform–propanol (9:1, v/v), ethylacetae–methanol (7.5:2.5, v/v), and chloroform-acetone-formic acid (8:2:1, v/v), toluene-acetone-methanol (6:2:2, v/v). Various band dimensions were tested in order to get sharp peaks with symmetrical shape. Reported TLC-densitometric methods for the simultaneous determination of ETO/PA mixture employed different mobile phases [21]. Plates were scanned at four different wavelengths (232nm, 246nm, and 266nm, 254nm) and using different slit dimensions. Different band dimensions were tested in order to obtain sharp, symmetrical and well resolved peaks. The optimum bandwidth was chosen (6 mm) and the inter-space between bands was found to be 5 mm. Different scanning wavelengths were tried in that 254 nm was found optimum for both the compounds.

Scanned peaks were sharp, symmetrical and low noise was noticed. Selection of slit dimension is in such a way that the scanning light beam should ensure complete coverage of band dimensions on the scanned track and it should not interfere with adjacent bands. Different slit dimensions were tried, in that 5.0×0.45 mm proved to be the slit dimension of choice with high sensitivity. Finally toluene: acetone: methanol: glacial acetic acid (6:2:1:0.5 v/v) was selected as suitable mobile phase, bandwidth was chosen 6 mm and wavelength selected was 254 nm and slit dimension was 5.0×0.45 mm for the development. The above conditions were allowed good separation between the binary mixture and impurity with good Rf values without tailing of the separated bands (Fig. 3). 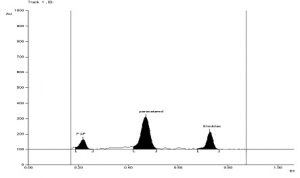 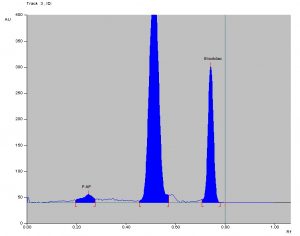 Results of statistical comparison of proposed methods were shown in Table 7, results shows that the calculated t and F values are less than the theoretical ones, confirming accuracy and precision at 95% confidence level

Reaction mechanism: When PAP is treated with Phenol in the presence of base it gets converted into a blue colour indophenol complex. For the separation of PAP from PA the same conditions (i.e.) toluene: acetone: methanol: glacial acetic acid (6:2:1:0.5 v/v) was selected as suitable mobile phase, the developed plate was sprayed with color reagent and scanned at 710 nm where PAP shows maximum absorbance for detection as showed in Fig. 5. 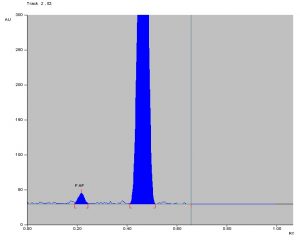 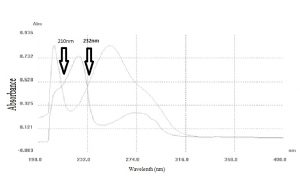 TABLE 3: SUMMARY OF VALIDATION PARAMETERS: STATISTICAL DATA FOR THE CALIBRATION GRAPHS OF ETO AND PA BY TLC DENSITOMETRIC AND D1 DERIVATIVE METHOD

a The intraday (n=3), average of three concentrations repeated three times within day.

TABLE 4: STANDARD ADDITION TECHNIQUE FOR DETERMINATION OF ETO (a) AND PA (b) BY TLC DENSITOMETRY AND D1 DERIVATIVE METHOD (n=6)

TABLE 6: ROBUSTNESS (a) TESTING OF HPTLC–DENSITOMETRIC METHOD AND (b) D1 DERIVATIVE METHOD (n=3)

TABLE 7: STATISTICAL COMPARISON BETWEEN THE RESULTS OF THE PROPOSED METHODS

CONCLUSION: The major toxicity of PA is mainly due to the presence of impurity called PAP.The developed HPTLC method was clearly differentiates the PA and PAP impurity, so this method is suitable for the routine quality control analysis of pure PA formulations and ETO and PA in pharmaceutical preparations. Statistical comparison of proposed methods showed that the calculated t, F values are smaller than the theoretical ones indicate that test passes the null hypothesis.  Apart from HPTLC method we were also reported color test for the identification of toxic impurity PAP [0.005%w/v]. Results showed that the developed methods were lack of interference from dosage form additives.

CONFLICT OF INTEREST: Declare None.