ABSTRACT: Prednisolone (10mg/day) plus low dose Aspirin (80mg/day) improve the implantation rate in women with autoimmune condition who are undergoing in-vitro fertilization. A new, simple, precise, accurate, and validated simultaneous equation method (Vierordt´s Method) has been developed for simultaneous determination of Prednisolone and Aspirin in the synthetic mixture. The method was based on the measurement of absorbance of both components at their ʎmax 243 nm and 226 nm of Prednisolone and Aspirin in methanol as solvent correspondingly. Linearity was obtained over a range of 2-6 µg/mL for Prednisone and 16-48 µg/mL for Aspirin. The percentage recovery obtained for Prednisolone and Aspirin was found to be in the range 98.85% to 99.95% and 99.41% to 99.74%, respectively. The results of the proposed method were validated for linearity, precision, accuracy, robustness, ruggedness according to ICH guideline Q2(R1). The developed method can be successfully be applied for simultaneous estimation of drugs in all commercial products.

INTRODUCTION: Prednisolone is chemically 11ꞵ, 17, 21-Trihydroxypregna-1,4-diene-3,20-dione is well known Glucocorticoid. It is official in British Pharmacopoeia (BP) and Indian Pharmacopeia (IP). PRE is estimated by a spectrophotometric method as per IP and BP 1-2. It is indicated for the treatment of a wide range of inflammatory and auto-immune diseases such as asthma, multiple sclerosis, rheumatoid arthritis, autoimmune hepatitis, etc. 3-5 On an extensive survey of the literature, several analytical methods such as UV spectroscopy 6-12, RP-HPLC method 12-15, GLS and chemical ionization mass spectrometry 16, LC-MS/MS 17 have been reported for estimation of Prednisolone in bulk and pharmaceutical dosage form and also in synthetic mixture.

The combination of these two drugs is not official in any pharmacopeia; hence no official method available for the simultaneous estimation of Prednisolone and Aspirin in their combined dosage forms. Literature survey does not reveal any spectrophotomertic method for simultaneous estimation of Prednisolone and Aspirin in synthetic mixture or dosage forms. Based on above-mentioned fact, it was decided to develop and validate a simple, new, precise, accurate for Vierordt´s method for quantification of PRE and ASP in a synthetic mixture.

Material: PRE and ASP were obtained as a sample for research purposes from Reliance formulation Pvt. Ltd, Ahmadabad, Gujarat. Methanol (AR-Grade) was purchased from RANKEM chemicals. Whatman filter paper no.41 (Millipore, USA) was used in the study.

Preparation of standard stock solutions (100 µg/mL): An accurately weighed quantity of standard PRE (10mg) and ASP (10mg) powder were weighed and transferred to 100 ml separate volumetric flask and dissolved in methanol. The flask was shaken, and volume was made up to mark with methanol to give a solution containing 100µg/mL each of PRE and ASP.

Methodology: Vierordt´s method uses absorbance at two selected wavelengths, which is their ʎmax of both components. From the overlay spectra of two drugs, it is evident that PRE and ASP ʎmax is 243 nm and 226 nm, respectively. Five standard working solutions having concentration 2-6 µg/mL for PRE and 16-48 µg/mL for ASP were prepared in methanol and absorbance at 243 nm(ʎmax of PRE) and 226 nm (ʎmax of ASP) were measured and absorptivity coefficient were calculated using calibration curve. Finally, Absorbance of the mixture (sample solution) was measured at 243 nm and 226 nm, respectively.

The concentration of two drugs in the mixture can be calculated using the following equation.

Validation of the Proposed Method: The proposed method validation according to the International Conference on Harmonization (ICH) guideline 30.

Linearity (Regression Method): The calibration curves were plotted over a concentration range of 2-6 µg/mL for PRE and 16-48 µg/mL for ASP. Accurately measured aliquots of PRE (0.2, 0.3, 0.4, 0.5 and 0.6 ml) and ASP (1.6, 2.4, 3.2, 4.0 and 4.8 ml) were transferred to a series of 10 ml of volumetric flask and diluted to the mark with methanol. The absorbance’s of solutions were measured at 243 and 226 nm against methanol as blank. The calibration curves were constructed by plotting absorbance versus concentration and the regression coefficient was monitored.

Method Precision (Repeatability): The precision of instrument was checked by repeated scanning and measurement of absorbance of solutions (n=6) for PRE (2-6 µg/mL) and ASP (16-48 µg/mL) without changing the parameter of the proposed spectrophotometry method.

Accuracy Study: The accuracy of the analytical method was adjudged by spiking of a blank with a standard solution.  Methanol was selected as blank and was spiked at 50, 100, and 150% of target concentration (4+32 µg/mL of PRE and ASP) Table 1. Each spiked concentration was analyzed three times, and mean % recovery was observed at each spiked level.

Solvent Stability: Solvent stability was determined by scanning the same solution prepared in the selected solvent (methanol) at 3 different time intervals that is at 0 h, 6 h, and 24 h. Mixtures of 5 ± 40 µg/ml solutions of PRE and ASP in methanol were scanned at a selected time interval, and characteristics of spectra were compared (λmax).

Assay: As the proposed synthetic mixture is having a dose of 10 mg of PRE and 80 mg of ASP, 10 mg of PRE and 80 mg of ASP was mixed and diluted appropriately to give a mixture containing 5 µg/mL of PRE and 40 µg/mL of ASP. This mixture was scanned between 200-400 nm. Absorbance was measured at selected wavelengths and was transformed to concentration with the help of linear regression equation. This mixture was analyzed for three times, and mean % assay was drawn.

Selection of Analytical Wavelength: Proper wavelength selection for estimation of both drugs depends on the nature of the drug and their solubility. For the selection of analytical wavelength solution containing 10 µg/mL of PRE and ASP were scanned individually and overlapped Fig. 1. The method employs solving equation based on measurement of absorbance at 243nm and 226 nm, which were selected as λ1 and λ2, respectively. 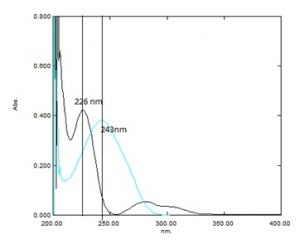 Linearity and Range: The calibration curve was constructed between absorbance and concentration in the range of 2-6 µg/mL of PRE and 16-48 µg/mL of ASP Fig. 2-4. When the calibration curve was plotted for given concentration range Fig. 5-8, the value of linear regression coefficient was found to be 0.999 and 0.997 for PRE and 0.995 and 0.999 for ASP at 243 nm and 226nm, respectively. 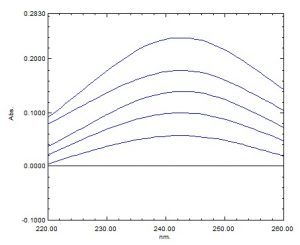 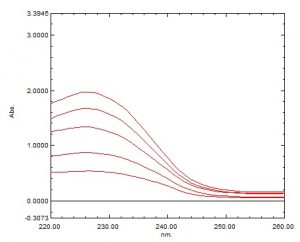 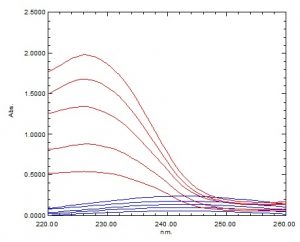 Method Precision (Repeatability): When all PRE and ASP were analyzed at all concentration, calculated relative standard deviation at each level was found to be less than 2, so that method was found to be repeatable over the range of 2-6 µg/mL for PRE and 16-48 µg/mL for ASP Table 7-10.

Intermediate Precision: For determining interday and intraday precision, RSD was monitored at the selected concentration level, which was found to be less than 2, so the method was found to be precise for estimation of PRE and ASP Table 11-14.

Accuracy Study: Spiked blank with standard solution at 50, 100, and 150% level was analyzed for % recovery which was found within 98 to 102, so the method was found to be accurate Table 15.

(n = 3 determination for each set)

TABLE 16: DETERMINATION OF PRE AND ASP FROM SYNTHETIC MIXTURE

ACKNOWLEDGEMENT: The authors are grateful to Smt. S.M. Shah Pharmacy College for providing excellent research facilities and promoting research activities. The authors are also extremely grateful to Reliance formulation Pvt. Ltd., Ahmadabad, to provide a sample of PRE and ASP.