Salbutamol (SAL) and Ambroxol (AMB) is used for the treatment of asthma and bronchitis. Two simple, economical, accurate, and precise methods for simultaneous estimation of Salbutamol Sulphate (SAL) and Ambroxol Hydrochloride (AMB) in tablet dosage form have been developed. The methods are absorbance correction method (I) and first order derivative method (II). In first method ambroxol hydrochloride (AMB) was determined directly from calibration plot by measuring absorbance at 300nm and salbutamol sulphate (SAL) was determined after correction for absorbance of ambroxol hydrochloride (AMB) at 223 nm. Second method is based on first order derivative spectroscopy to overcome the spectral interference from the other drug. Wavelength 252 nm was selected for SAL and 232 nm for AMB. Both the methods showed linearity in the concentration range of 2-10µg/ml for SAL and 2-20 µg/ml for AMB. The accuracy and precision of the methods were determined and the methods validated stastically. No significant difference was observed between the results obtained by the two methods

INTRODUCTION: Salbutamol sulphate (SAL), chemically known as bis [(1RS)-2-[(1, 1-dimethylethyl) amino]-1-[4-hydroxy-3-(hydroxymethyl) phenyl] ethanol] sulphate, is beta-adrenoceptor agonist used for the relief of broncho-spasm in conditions such as asthma and chronic obstructive pulmonary disease. The drug is official in Indian pharmacopoeia 1-4. Ambroxol hydrochloride (AMB) is chemically, trans-4-((2-amino-3, 5-dibromobenzyl) amino) cyclohexanol hydrochloride. Ambroxol reduces bronchial hyper-reactivity and acts as a mucolytic and cough suppressant. Combination of SAL and AMB is used for the treatment of asthma and bronchitis 5-7 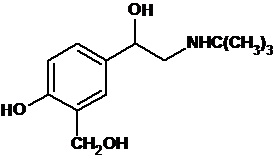 Preparation of stock solutions: Standard stock solutions of both Salbutamol sulphate and Ambroxol hydrochloride were prepared by dissolving 10 mg of SAL and 10mg of AMB separately in 20ml of 0.1N HCL in 100ml volumetric flasks. Final volume was made up to 100ml with 0.1N HCL to get working standard solution of each containing100µg/ml of both SAL and AMB.

CAMB and CSAL = Concentrations of AMB and SAL in sample matrix. 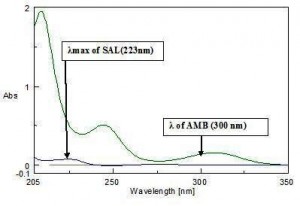 It was observed that SAL showed dA/dλ zero at 252nm in contrast to AMB that has considerable dA/dλ at this wavelength. Futher, AMB has dA/dλ zero at 232nm while at this wavelength SAL has significant dA/dλ. Therefore, wavelengths 252nm and 232nm were employed for determination of AMB and SAL respectively without interference of other drug. The calibration curves were plotted at these wavelengths of concentrations against dA/dλ separately. The equation of line obtained to determine concentrations of SAL and AMB is as follows; 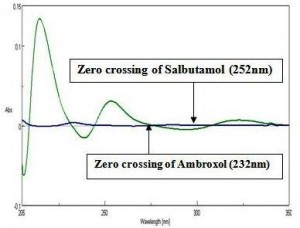 Analysis of tablet formulation: For the estimation of drugs in the commercial formulations, ten tablets containing 2 mg of SAL and 30 mg of AMB were weighed and average weight was calculated. The tablets were crushed and powdered in glass mortar. For the analysis of drugs, quantity of powder equivalent to 1 mg of SAL and 15 mg of AMB was transferred to 100 ml volumetric flasks and dissolved in sufficient quantity of 0.1N HCL. It was sonicated for 30mins and volume was made up to obtain a stock solution of 10 μg/ml of SAL and 150 μg/ml of AMB. This solution was then filtered through whatman filter paper # 42. Further dilutions were made from this stock solution to get required concentration. In First method, AMB concentration was determined directly from calibration plot by measuring absorbance at 300nm where SAL shows zero absorbance and SAL was determined by subtracting absorbance of AMB from total aborbance of sample at 223nm (λmax of SAL) by using equation I and II respectively. In second method, concentration of SAL and AMB was determined by measuring the dA/dλ at wavelength 252nm (zero crossing of AMB) and 232nm (zero crossing of SAL) using equation III and IV respectively. Results of tablet analysis are shown in Table 3. The assay procedure was repeated six times (n=6).

Validation: The method was validated according to ICH guidelines to study linearity, accuracy and precision 27.

Accuracy (Recovery studies): To ascertain the accuracy of proposed methods, recovery studies were carried out by standard addition method at three different levels (80%, 100% and 120%). Percent recovery for SAL and AMB, by both the methods, was found in the range of 98.20- 102% (Table 4).

Precision: The reproducibility of the proposed methods was determined by performing tablet assay at different time intervals on same day (Intra-day precision) and on three different days (Inter-day precision).

RESULTS AND DISCUSSION: Under experimental conditions described, linearity, assay of tablet, accuracy studies and precision were performed. In both the methods linearity was observed in the concentration range of 2-10μg/ml and 2-20 μg/ml for SAL and AMB respectively and correlation coefficient was found to be > 0.998. The results of commercial tablet formulation are presented in Table 1. Results of accuracy studies are presented in Table 2. Percent recovery for SAL and AMB by both the methods was found in the range of 98.20% to 102 %. S.D. and R.S.D. for six determinations of tablet sample, by both the methods, was found to be less than 2.0 indicating the precision of both the methods. Hence, it can be concluded that the developed spectrophotometric methods are accurate, precise and can be employed successfully for the estimation of salbutamol and ambroxol in bulk and formulation.

CONCLUSION: The two spectrophotometric methods were developed and validated as per ICH guidelines. The standard deviation and % RSD calculated for the proposed methods are within limits, indicating high degree of precision of the methods. The results of the recovery studies performed indicate the methods to be accurate. Hence, it can be concluded that the developed spectrophotometric methods are accurate, precise and can be employed successfully for the estimation of salbutamol and ambroxol in bulk and formulation.