ABSTRACT: Ultrasound-assisted dispersive liquid-liquid micro extraction (UA-DLLME) was proposed for simultaneous determination of trace levels of Vitamin B1 (thiamine) and Vitamin B9 (folic acid) in the human urine and serum samples. High performance liquid chromatography (HPLC) coupled with chemometrics method was employed to analysis the extraxtants. Objective: The optimal conditions of the extraction recovery, including pH of sample solution, type and volume of extraction solvent, disperser solvent type and volume, temperature and time of ultrasound, centrifugation time and ionic strength were were studied step-by-step via one-factor-at-a time procedure. Then signiﬁcant variables were chosen and considered to further optimize using the hybrid Box–Behnken design -genetic algorithm. UA-DLLME method with HPLC-UV and utilizing hybrid Box–Behnken design -genetic algorithm to optimize the extraction process was presented for the ﬁrst time in this study. Under the optimized extractions, relative standard deviations (RSD) of the analyses less than 4% (n= 3) and detection limit of 3.09-11.15 ng mL. Recoveries for both thiamine and folic acid were in the ranges of 88–107%. As the result, the UA-DLLME – HPLC coupled hybrid Box–Behnken design -genetic algorithm was successfully applied for the simultaneous determination trace levels of thiamine and folic acid in human urine and serum samples.

INTRODUCTION: B Vitamins are water-soluble Vitamins, which are necessary to a healthy diet as they are involved in tissues growth, normal cells function 1. Thiamine is also known as Vitamine B1 2 and folate is a general type of water soluble B Vitamins, also known as B9 3. Thiamine and folic acid are types of B Vitamins that are very necessary for body functions, conduction of brain and nerve signals 4.

Determination of thiamine and folic acid are great of clinical importance in various patients. Several chromatographic methods have been reported for analyzing of folates in human urine and serum. Several methods have been reported for determination of B Vitamins such as including radioimmunoassay 5, 6, capillary electrophoresis 3, 7-8, liquid chromatography–mass spectrometry (LC–MS), and liquid chromatography–tandem mass spectrometry (LC–MS/MS) 9–14.

Among these methods HPLC is considered as a sensitive and selective method and therefore suitable for active substance determination; it is also considered as a great tool for evaluating the formulation stability in cosmetic and pharmaceutical industries 13-14.

DLLME method was reported by Assadi and developed by Rezaee et al., (2006) 15 which is an effective microextraction technique for preconcentration and separation of organic and inorganic specimens. This method is a ternary component solvent system that applies a mixture of a water-immiscible extraction solvent dissolved in a water-miscible disperser solvent injected rapidly into an aqueous sample.  DLLME has a higher enrichment factor, is safe for use with hazardous samples, cost effective, environmental friendly and easier to incorporate into automated analytical methods 16-18. After extraction, sample must be centrifuged to facilitate phase separation. Ultrasonic radiation accelerates mass transfer processes in the ultrasound-assisted dispersive liquid–liquid microextraction (UA-DLLME).

George E. P. Box in the 1950s introduced response surface methodology (RSM) -a factorial design based method for collection of statistical techniques- which has been used for modeling and optimization of some chemical and physical processes 19. Different classes of RSM such as central composite design (CCD), Box-Behnken design (BBD) and three-level factorial design have different properties and characteristics. Response surface methodology (RSM) is a collection of mathematical and statistical techniques for empirical model building. Response surfaces are used to determine optimal experimental conditions 20. In addition, it is a good way to graphically illustrate the relation between different experimental variables and the response(s).

The optimal conditions of the extraction recovery, including pH of sample solution, type and volume of extraction solvent, disperser solvent type and volume, temperature and time of ultrasound, centrifugation time and ionic strength were optimized. Then signiﬁcant variables were considered and optimized using the hybrid Box–Behnken design -genetic algorithm.

This method aimed to investigate and validate a method for the simultaneous determination of thiamine and folic acid concentrations in human urine and serum samples by HPLC after optimization by UA-DLLME coupled with chemometrics method was employed to analysis the extraxtants.

2.2. Chemicals and reagents: The analytical-reagent grade of Vitamins (>99%) was purchased from Sigma Aldrich (Steinheim, Germany). The stock solutions of Vitamins were prepared by dissolving in water. The working solutions were prepared by appropriate dilution of the stock solution with double distilled water. Double distilled deionized water was produced by a Milli-Qsystem (Millipore, Bedford, MA, USA). Standard solutions stored at 4 °C and brought to ambient temperature just prior to use. In throughout the experimental runs all the solvents, calibration and real samples were ﬁltered through 0.45 µm nylon ﬁlter membranes (Varian, USA).

To an aliquot of 100 µL of human serum sample, a solution containing 50 µL of 10% TCA was added for protein precipitation. This mixture was shaken for 10 s and then filtrated through 0.45 µm nylon ﬁlter membrane. The filtrate was analysis with the procedure described below.

Standard stock solutions were prepared by dissolving Vitamin in deionized water and working standard solutions at different concentrations were prepared freshly by mixing the appropriate volumes of the stock solutions and diluting with deionized water. The real samples in this study were collected from human urine samples and then stored at 4-5°C until analysis. Human urine samples were prepared using the UA-DLLME method.  Aliquots of 0.5 mL human urine sample were alkalinized with 200 µL (NaOH 1 mol L-1) for the hydrolysis of acyl glucuronic acid conjugates and then neutralized with 200µL (HCl 1 mol L-1). The samples were placed in centrifuge glass vials and their ionic strength and pH were adjusted to the optimum level (pH 3.0).100µL tetrachloride (as extracting solvent) and 50 µL methanol (as dispersive solvent) into a sample solution. The vial was immersed in an ultrasonic water bath, sonicated for 3 min, and shaken manually.  A cloudy solution formed in the test tube and then the mixture was gently shaken and the cloudy solution was centrifuged for 4 min at 5500 rpm. After slowly discarding the aqueous solution, the resulting droplet and lipidic solid were dissolved at 20 μL with HPLC grade methanol and then filtrated through a 0.45 μm membrane to throw out the white floccule from the extract of samples. 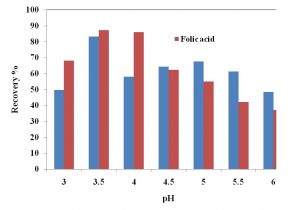 FIG. 1: EFFECT OF pH SAMPLE SOLUTION ON THE RECOVERIES OF EACH VITAMIN.

In order to obtain the highest extraction efficiency of the DLLME method, the volume of the solvent had to be optimized. Optimization process was performed using various volumes of methanol and carbon tetrachloride in the range of 10.0 to 60.0 µL and 50.0 to 120.0 µL respectively. Finally, the volume of methanol 50.0 µL and carbon tetrachloride 100.0 µL was chosen as the optimal volume for further investigations. The results are shown in Fig. 2 a-b. 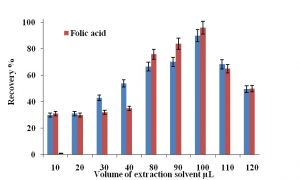 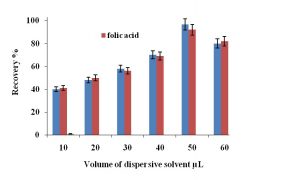 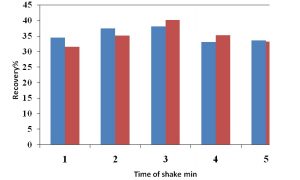 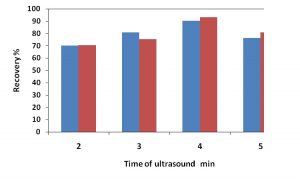 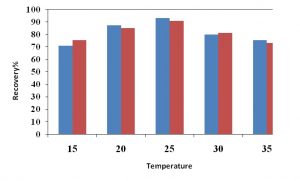 FIG. 3: COMPARISON OF ULTRASOUND-ASSISTED DLLME AND SHAKE-ASSISTED-DLLME FOR EXTRACTION EFFICIENCY (a), EFFECT OF TIME (b) AND TEMPERATURE (c) OF ULTRANSOUND ON THE RECOVERIES OF VITAMINS. CONDITIONS: SAMPLE SOLUTION, 5 mL OF (50ng mL-1) OF EACH VITAMINS; pH SAMPLE SOLUTION: 3.5; VOLUME AND TYPE OF EXTRACTANT SOLVENT: CARBON TETRACHLORIDE, 100.0 µL AND VOLUME AND TYPE OF DISPERSIVE SOLVENT: METHANOL, 50.0µL, TIME AND TEMPERATURE OF ULTRASOUND: 4 MIN, 25 ºC. 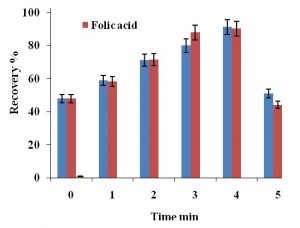 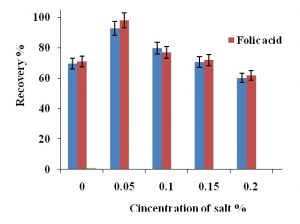 TABLE 1: FACTORS AND THEIR LEVELS IN BOX BENKEN DESIGN.

TABLE 2: FACTORS AND THEIR LEVELS IN BOX–BEHNKEN EXPERIMENTAL DESIGN AND OBTAINED RESULT FOR EACH RUN.

The response surface model was developed by considering all the signiﬁcant interactions in the BBD. The response variable (Y) and the tested variables were related by the following second-order polynomial equation (Eq. (1)).

Analysis of variance (ANOVA) was applied to evaluate the statistical signiﬁcance of the model. If p-value (smallest level of signiﬁcant) was lower than 0.05, it indicates that the model would be statistically signiﬁcant. The summery of the ANOVA is shown in Table 3. The ﬁtness of the model equation was evaluated by the regression coefﬁcients (R2) of determination thiamine and folic acid. The value of R2 (0.9878) also indicated a good agreement between the experimental and predicted values of response. F-test was used to estimate the statistical signiﬁcance of all terms in the polynomial equation within 95% conﬁdence interval 19-20. The lack of ﬁt (LOF) is a special test assesses goodness of fitting the data from the model. The Lack of fit report only appears when it is possible to conduct this test. A p-value of LOF i.e. 0.230 indicates the good ability of model and best selection of optimum conditions.

The pH of solution had significant effect on the absorbance. The appearance of quadratic terms of pH of solution in the eq. 1 indicates that the absorbance increases slowly as pH solution decreases. Response surface curves facilitate investigating the interaction between the independent variables and finding the optimal level for each variable, as well. These curves are represented in Fig. 6 (a)–(e). Inspecting these figures show that amounts of interactions between variables are little as the extension of curvature of the plots in not very high. In spite of this observation, the interaction terms appeared significantly in the model equation. After generation of the polynomial equations that relate the absorbance to the independent variables, the GA was used for optimization of the process. The optimum values of the tested variables found to be as follows: A= 3.4, B= 48µL, C=101 µL and D= 4.0 min. 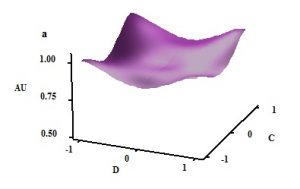 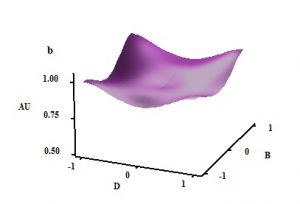 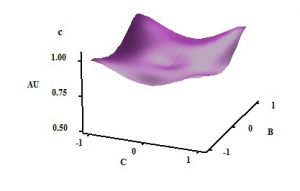 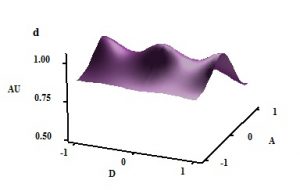 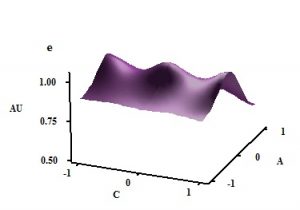 TABLE 4: STATISTICAL PARAMETERS AND FIGURES OF MERIT FOR DETERMINATION OF ANALYTES IN HUMAN URINE AND SERUM SAMPLES BY APPLYING UA-DLLME METHOD. 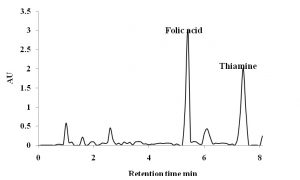 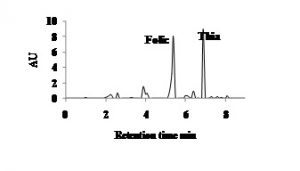 Acknowledgments: The authors express their appreciation to the Abadan School of Medical Sciences for financial support of this work (Project ID: 95ST-0059 and code of ethics: IR. ABADANUMS.RES.1395.83).