ABSTRACT:  In the present work a simple, accurate and precise method has been developed and validated for the simultaneous estimation of Perindopril Erbumine (PDE), Amlodipine Besylate (AMD)and in their combined dosage form by UV Spectrophotometric Methods. The Method A employs estimation of drugs by simultaneous equation method (SEM) using 298.3 nm and 231.9nm i.e. λmax values of PDE and AMD respectively. Method B employs the estimation of drugs by Absorption Correction method (ACM) at 250.4nm for PDE where absorbance of AMD is zero. Absorbance correction method was based on the property of additivity of absorbances. At 250nm, Perindopril erbumine showed some absorbance while Amlodipine besylate showed zero absorbance. The method involved measurement of absorbance at two wavelengths 250 and 231 nm. For estimation of AMD, corrected absorbance was calculated at 231 nm due to the interference of PDE at this wavelength. Calibration curves were linear with correlation coefficient between 0.999 over the concentration range of 10-150μg/mL and 0.5-10 μg/mL for PDE and AMD respectively. The percent recoveries of the drugs were found nearly 100 % representing the accuracy of the both methods. Validation of the proposed methods was carried out for its accuracy, precision, specificity, linearity and limit of detection according to ICH guidelines. The proposed methods can be successfully applied in routine work for the determination of perindopril and amlodipine in combined dosage form.

INTRODUCTION: Perindopril Erbumine is chemically 2- Methyl Propane-2-amine (2S, 3As, 7As)-1-[(2S)-2- 2[[(1S)-1-(ethoxycarbonyl) butyl] amine] propanoyl] octahydro-1H-indol-2-carboxylate, with molecular formula-C19H32N2O5.C4H11N and 441.60 mg molecular weight. It is freely soluble in water and sparingly soluble in methaline chloride. Perindopril Erbumine is Angiotensin Converting Enzyme Inhibitor. It is used for the treatment of hypertension. It may be used alone or in combination with other antihypertensive

Amlodipine besylate 8 is 3-ethyl 5-methyl 4RS-2-[(2-aminoethoxy) methyl]-4-(2-chlorophenyl)-6-methyl-1,4-dihydropyridine-3,5- dicarboxylate benzene sulphonate. Its molecular weight is 567.1 mg. It is slightly soluble in water and proponol, sparingly soluble in ethanol and freely soluble in methanol. It is a calcium channel blocker, used as an anti-hypertensive and in the treatment of angina; it lowers the blood pressure, relaxes heart muscles and dilates the heart blood vessels to prevent spasm. 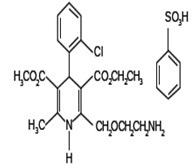 Literature survey revealed that Methods for the determination of Amlodipine Besylate include (HPLC) and for the determinations of Perindopril erbumine5 include HPLC, simultaneous spectrophotometric determination and visible spectrophotometric method. The analytical methods lack stability indicating nature in case of Amlodipine besylate and Perindopril erbumine combination using water as solvent. In the present investigation, an attempt was made to develop a simple, rapid, precise and accurate simultaneous equation method and absorption correction method for simultaneous estimation of PDE and AMD using water as solvent by UV Spectrophotometry. The major advantage of the proposed method is economic. This proposed method can be successfully employed for quality control during manufacture and for assessment of the stability of both drugs in bulk samples and their combined tablet dosage forms.

Drug substance: Perindopril erbumine and Amlodipine Besylate (working standard 99.10 and 99.70) were obtained as gift sample from Rainbow pharma training lab, Hyderabad, India. Pharmaceutical tablet formulation of COVERSYL-AM4/5 was purchased from local pharmacy. Distilled water was used as a solvent for the entire study.

10 mg of PDE, 10 mg of AMD were accurately weighed and transferred in to 10 mL volumetric flasks separately. Dissolved in distilled water and made up to the volume to 10mL with the same. These solutions were observed to contain 1000 μg/mL, for both the drugs. From this stock solution further dilutions are made with distilled water to produce 10, 30, 60, 90, 120μg/mL and 0.5, 2.5, 5, 7.5, 10μg/mL of PDE and AMD respectively.

From the stock solutions, a working standard was prepared. The absorption spectrum for PDE was recorded using the concentration of 10μg/mL and it was found to show absorption maxima at 298.3nm. For AMD, the absorption spectrum was recorded using 10μg/mL solution and the maximum absorption was found to be 231.95nm. The Calibration curves were prepared for PDE and AMD in the concentration range of 10-150 μg/mL and 0.5-10μg/mL at selected wavelengths by diluting aliquot portions of stock solution of each drug. The Calibration plots PDE and AMD are shown in Fig.3 and Fig.4 respectively. 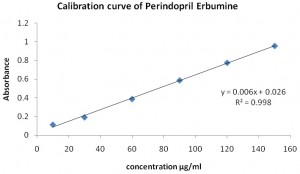 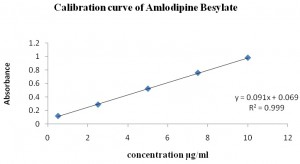 In quantitative estimation of two components by Simultaneous Equation method two wavelengths i.e.298nm of PDE and 231nm of AMD were selected as their respective λmax from the overlain spectrum (Fig.5) at which both drugs have absorbance. A set of two simultaneous equations were formed using absorptivity coefficients at selected wavelengths. The concentrations of two drugs in the mixture were calculated using the following two simultaneous equations. Statistical parameters like the slope, intercept coefficient correlation, standard deviation and relative standard deviation were calculated (Table 1). 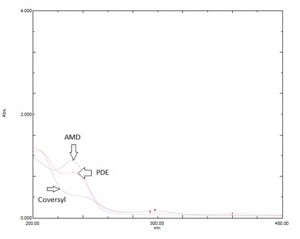 From the overlain spectrum of PDE and AMD in water (Fig.6), it was observed that AMD has zero absorbance at 250nm, where as PDE has substantial absorbance. Therefore, PDE was estimated at 250nm with no interference from AMD. To estimate AMD, absorbance of PDE was measured at 231nm using standard solution of PDE (10μg/mL). The contribution of PDE was deducted from the total absorbance of sample mixture at 231nm.The calculated absorbance for AMD was called as ‘Corrected Absorbance’ for AMD. The concentration of AMD was determined from calibration curve at 231nm using corrected absorbance.

Ten tablets were accurately weighed and average weight was calculated. The tablets were triturated to produce a fine powder. An accurately weighed quantity of powder equivalent to 4.0 mg of PDE was transferred to 10mL volumetric flask and dissolved in water by shaking and volume was made up to 10mL with water as solvent. The solution was filtered through Whatman filter paper No. 41 and aliquot portion of filtrate was diluted to obtain a solution of 10μg/mL of PDE and 10.24μg/mL of AMD respectively. The absorbance of sample solution was measured at selected wavelengths.

The content of PDE and AMD in sample solution of tablet was calculated by using SEM method (equations 1 and 2, Table 1) and absorption correction method. The analysis procedure was repeated six times and the result of analysis are shown in Table 2. curve (n = 6) and s is slope of regression equation. 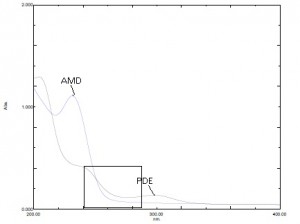 The methods were validated with respects to linearity, accuracy, precision, LOD (Limit of detection), LOQ (Limit of quantitation).

Linearity was checked by diluting standard stock solution at six different concentrations. PDE was linear with the concentration range of 10–150 μg/mL at 298nm (method A), 250nm (method B) shown in fig.7 and AMD showed the linearity in the range of 0.5 –10μg/mL at 231nm for absorption correction method1 and simultaneous equation method. The results are tabulated in Table 3. 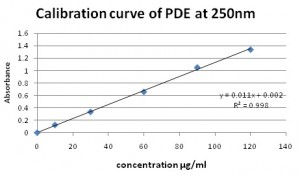 TABLE 3: LINEARITY VALUES FOR METHOD A &

Accuracy: To check the accuracy of the developed methods and to study the interference of excipients in formulation, analytical recovery experiments

were carried out by using standard addition method in three different concentrations. From the total amount of drug found, the percentage recovery was calculated. This procedure was repeated for three times for each concentration. The % RSD was calculated and the results are shown in Table 4 for both the methods respectively.

TABLE 4: %RECOVERY STUDIES FOR PDE AND AMD IN BOTH METHODS

TABLE 5: PRECISON FOR BOTH METHODS

The limit of detection (LOD) and limit of quantitation (LOQ) parameters were calculated using the following equations;

where σ is standard deviation of y intercept of calibration times with the same concentration.

Results are tabulated in Table 6.

RESULTS AND DISCUSSION: The proposed two methods are based on spectrophotometric simultaneous estimation of PDE and AMD in UV region using water as solvent.The absorbance spectral analysis shows the maximum absorbance (ƛmax) at 298nm for PDE and 231nm for AMD. Method A is based on simultaneous equation method which involves generation and solving of simultaneous equations using absorptivity coefficient(A1,A2) values and absorbance at 298 and 231 nm for estimation of PDE and AMD in standard and sample mixture. Method B is based on absorbance correction method which involves correction of absorbance at 231 nm for estimation of AMD and the estimation of PDE was done at 250 nm directly with no interference of AMD which can be understood from calibration curve plotted for PDE at 250nm. The corrected absorbance of AMD was found to be 0.114 and 0.491µg/mL concentration was obtained using y=mx+c equation, which falls in linearity range of AMD at 231nm.

Beer’s law obeyed in the concentration range of 10-150μg/mL and 0.5-10μg/mL for PDE and AMD respectively. The correlation coefficients were found to be in between 0.999 which shows the good linear relationship for both components. The results of optical characteristics such as Beer’s law limits, correlation coefficient, slope, intercept and absorptivity coefficient values were summarized in Table 7 for method A and method B. The tablet assay results obtained by proposed methods were very close to labelled claim and low value of standard deviation, suggesting that the developed methods has high precision.

In order to check the accuracy of the developed methods, known quantities of standard drugs of PDE and AMD in three different levels were added to its pre-analyzed tablet sample and analyzed by the developed methods. The results of recovery studies are shown in Table 4. The mean percentage recoveries were found in the range of 99.0- 101.0 and it indicated the non interference of the excipients in the tablet formulation.

Validation data of the proposed methods:

Linearity: Linear correlation was obtained between absorbance vs concentration of PDE and AMD in the range of 10-150 & 0.5-10μg/mL respectively. The linearity of the calibration curves was validated by the high value of correlation coefficients of regression (Table 3).

The recovery studies were carried out using standard addition method. The mean recovery obtained was 99.81 ± 0.45 and 98.85 ± 0.40 % for PDE and AMD, respectively (Table 4). The high values indicate that the method is accurate.

Assay of the pharmaceutical formulation:

The proposed validated methods can be successfully employed to determine PDE and AMD in their combined dosage form. The results obtained for PDE and AMD were comparable with the corresponding labelled amounts of marketed formulation. (Table 2).