ABSTRACT: A simple, accurate, economic and rapid method for the simultaneous estimation of Alfuzosin and Dutasteride by RP-HPLC, as a result simple, economic, precise and accurate methods was developed and validated by Reverse Phase High performance Liquid Chromatography in tablet dosage form. The mobile phase consisted of Acetonitrile and Buffer solution in the ratio of (75:25) was eluted through universil C18 column (150 mm x 4.6 mm, i.d., 5µm particle) at a flow rate of 1.0 ml/min. The column temperature was 25ºC. The eluent was monitored at 225 nm for detection of Alfuzosin and Dutasteride by the UV detector. The detection time was 8 min. The validation of HPLC method was carried out in accordance with the ICH guidelines

Inhibition of these adreno receptors leads to the relaxation of smooth muscle in the bladder neck and prostate, resulting in the improvement in the urine flow and a reduction in symptoms in benign prostate hyperplasia 2.

Alfuzosin also inhibits the vasoconstrictor effect of circulating and locally released catecholamines (epinephrine and norepinephrine), resulting in peripheral vasodilation. Dutasteride 3 (Fig. 1B) (5α, 17β)-N-{2,5bis(trifluoromethyl) phenyl}-3-oxo-4-azaandrost-1-ene-17-   carboxamide. It is enzyme inhibitor and antihyperplasia agent. Dutasteride is a dual 5-alpha –reductase inhibitor that inhibits conversion of testosterone to dihydrotestosterone. Dutasteride inhibits both isoforms of 5-alpha reductase inhibitor. Dutasteride is a synthetic 4-aza steroid compound that is a selective inhibitor   of both the type1 and type 2 isoforms of steroid 5 alpha reductase.

Intracellular enzymes that convert estosterone to 5alpha dihydrotestosterone (DHT). Type-1 is predominant in sebaceous glands of most skin, including scalp, liver. Type-2 is predominant in prostate, seminal vesicles, epididymis and hair follicles as well as liver 4. Alfuzosin has the oral bioavailability of 60% under fasting conditions. Many methods have been reported for the determination of Alfuzosin and Dutasteride alone or in combination with other active pharmaceutical agents in dosage forms or in biological fluids; however, simultaneous determination of Alfuzosin and dutasteride   has not been described previously. The purpose of present study was to develop and validate an HPLC 5, 6 method for simultaneous determination of in alfuzosin and dutasteride tablet dosage form. Moreover, stability of active ingredients was also evaluated by using this method. 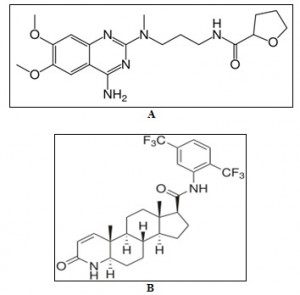 The isocratic elution was carried out using an HPLC system (Waters alliance system; Waters Corporation, Milford, MA, USA). An aliquot of 10 ml sample was assayed for the simultaneous determination of Alfuzosin and Dutasteride.  The mobile phase consisted of Acetonitrile and Buffer solution in the ratio of (75:25) was eluted through Universil C18 column (150 mm x 4.6 mm, 5 µ) at a flow rate of 1.0 ml/min. The column temperature was 25ºC. The eluent was monitored at 225 nm for detection of Alfuzosin and Dutasteride by the UV detector. The detection time was 8 min.

Filtered and degassed the mixture of Acetonitrile and buffer in the ratio of 75:25 through 0.25 micron membrane filter.

An accurately weighed quantity of 0.5mg of Dutasteride and 10 mg of Alfuzosin was transferred into 50 ml volumetric flask, dissolved in about 10 ml methanol of mobile phase sonicated for10 minutes until all the content has been dissolved, then the volume was made up to the mark with mobile phase to get a concentrations of Dutasteride and Alfuzosin were found to be 10 µg/ml and 200 µg/ml.

Weigh about 10 tablets and powdered. From the equivalent amount of 0.5mg Dutasteride and 10mg of Alfuzosin was taken into 25 ml volumetric flask. Add about 10 ml of methanol and sonicated until the content were dissolved and made up the volume with mobile phase. Filter the content by using 0.25µ membrane filter by applying vacuum. Made up the volume to the mark with the mobile phase.

The mobile phase was allowed to equilibrate with stationary phase. The standard solution was injected for five times and measured the area for all five injections in HPLC. The %RSD for the area of five replicate injections was found to be within the specified limits. The results of precision are shown in Table 2.

For the simultaneous determination of Dutasteride and Alfuzosin, the specificity requires that the method should not be affected by the presence of other components. Usually the specificity would be performed by allowing the sample under stressed conditions.

For the specificity study 1 ml from stock solution taken in a 10 ml flask, make up to the volume with the mobile phase. The solution is heated at 40oC for a period of 30min. Observed for any degradation.

For the specificity study 1ml from the stock solution taken in a 10ml flask, make up to the volume with the mobile phase. The solution is placed in a UV cabinet, long light for 10minand observed the changes

Pipette one ml of stock solution into a 10 ml standard flask. To the flask 1 ml of 0.1M hydrochloric acid is added. Retention of the peaks is observed for any changes.

Pipetted 1 ml of   stock solution into a 10 ml flask, and 1 ml of 0.1 M sodium hydroxide is added and observed for any degradation. The drug formulation and the drug substance were subjected to different conditions like acidic, basic, oxidative etc are recorded. The stability study of Alfuzosin & Dutasteride in powdered tablet samples placed under ambient conditions of temperature, relative humidity and UV radiations was carried for 24hourss. The powdered tablet samples were separately stored at room temperature with 75% relative humidity (RH) and ultraviolet radiations (UV) for investigating the influence of these conditions on Alfuzosin& Dutasteride.

To five concentrations of Alfuzosin 100mcg and Dutasteride 5mcg, injected 5times and found %RSD. The method precision was found in Table 4.

Intermediate Precision or Ruggedness is the degree of reproducibility of the results obtained under a variety of conditions. It is checked that the results are reproducible under differences in conditions, analysts and instruments. Hence the proposed method was found to be rugged. The different analyst was executed and results were tabulated in Table 5.

Accuracy: The accuracy of the developed method was determined by assay and recovery studies. Recovery studies were carried out at three different levels. The preanalysed samples were spiked with 80%, 100%, and 120% of mixed standard solution. The mixtures were analysed by the proposed method. The study was carried out in triplicate. The mean percentage recovery values were found to be 99.52% and 99.65% for Alfuzosin and Dutasteride respectively. The accuracy of the method is determined by recovery with spiked concentration of pure drug at three levels for Alfuzosin   &dutasteride. The recovery of drug is well within the acceptance limits of 97-103%. The results were tabulated in Table 7.

The robustness of the proposed method was determined by analysis of aliquots from homogenous lots by differing physical parameters like volume of injection, wavelength which may differ but the responses were still within the limits of the assay. The test was performed in triplicate and the standard concentrations of Alfuzosin and Dutasteride used in this analysis were found by injecting 0.9and 1.1ml/min, respectively. The effect of variation in wavelength was found to be for Alfuzosin and Dutasteride 223nm and 227nm respectively. Table 8 reveals the results of minor modifications in analytical conditions such as flow rate of mobile phase and wavelength. No substantial variances were observed in the retention time and peak area of each component.  Moreover, the RSD for each value was <1%. Thus, the proposed method was considered as robust. The results were tabulated in Table 7.

The limit of detection (LOD) and quantification limit (LOQ) were determined by gradually diluting the sample and analysing by the proposed method. The signal/noise ratio (S/N) was determined for each tested strength. The typical S/N ratio recommended by the International Conference on Harmonisation (ICH) is 3/1 and 10/1 for LOD and LOQ, respectively.

Accurately weighed quantity of 50mg Alfuzosin and 2.5mg Dutasteride was transferred in to a 100 ml volumetric flask respectively. Dissolved in methanol and sonicated about 10min until all the contents has been dissolved, then the volume was made up to the mark with mobile phase.

10 ml from stock solution was further diluted into 100 ml with mobile phase.

The mobile phase was allowed to equilibrate with stationary phase. The spiking standard solution was injected for three times and measured the area and results were tabulated in table 8 and 9.

CONCLUSION: Hypertension is most commonly found in India 7. Single drug is not as effective, combination of antihypertensive drug or fixed dose combinations are used. Combinations of two or more drugs in the pharmaceutical dosage forms are very much useful in multiple therapies. Market survey reveals that, day‐by‐day new drugs and their combination with another drugs are being introduced in market as they have more patient compliance than a single drug 8. The analytical chemistry hence has challenge in developing the methods for their analysis with the help of number of analytical techniques, which are available for the estimation of the drugs and their combination 9. Analytical monitoring of pharmaceutical product or of specific ingredients within the product is necessary to ensure the safety and efficacy throughout the shelf life, including storage, distribution and use 10.

For stress indicating degradation stability studies ICH guidelines are to be followed. Stress testing of the drug substance can help to identify the likely degradation products, the stability and specificity of the analytical procedure 11, 12.  This study is to subject all the combinations in finished dosage form to post degradation study and object is to determine any degradation product formed. It also in-suits to develop and validate a part of simple, accurate, sensitive, reproducible and economic accurate method for determining active pharmaceutical ingredient in the fixed dose combination. The combination of Alfuzosin and dutasteride is not been reported in literature for their stability studies till date with the available marketed formulation. In this HPLC method acetonitrile and 0.02 M monopotassium phosphate buffer (75/ 25, v/v) were used as mobile phase. The chromatogram containing peaks of Alfuzosin and dutasteride in 8min detection time. The selected chromatographic conditions resulted in retention of at 4.003 and Alfuzosin & Dutasteride 2.83 min (n= 5), respectively (Fig. 2). The applied analytical conditions produced the peaks with suitable peak symmetry (<2) 13.

The typical conditions for system suitability of an analytical method encompass the relative standard deviation (RSD) <1%, peak symmetry <2 and theoretical plates >2000 14. All the samples exhibited RSD values <1% confirming that the analytical method was precise.

FIG. 2: CHROMATOGRAM OF ALFUSOZIN AND DUTASTERIDE RECORDED DURING SIMULTANEOUS DETERMINATION. 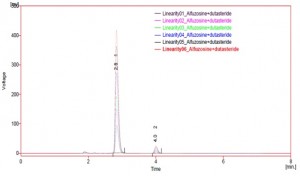 FIG.3 LINEARITY OF ALFUZOSIN AND DUTASTERIDE 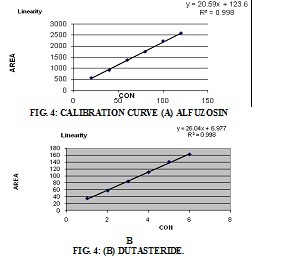 FIG. 4: CALIBRATION CURVE (A) ALFUZOSIN B