ABSTRACT: The present work describes a validated reverse phase high performance thin layer liquid chromatographic method for simultaneous estimation of Diclofenac sodium and Famotidine in bulk and in pharmaceutical dosage form. Chromatographic separation of the drugs were performed on aluminum plates precoated with 200-μm layers of silica gel 60 RP-18 F254S as the stationary phase and the solvent system consisted of methanol: water: triethylamine (7.5:3.5:0.5) (v/v/v). Densitometric evaluation of the separated zones was performed at 291 nm. The two drugs were satisfactorily resolved with Rf values 0.54 ± 0.02 and 0.69 ± 0.02 for Diclofenac Sodium and Famotidine, respectively. The accuracy and reliability of the method was assessed by evaluation of linearity over the range of 1500 ng/band to 9000 ng/ band for Diclofenac Sodium and over the range of 500 ng/ band to 3000 ng/ band for Famotidine respectively.

Combination of famotidine and diclofenac sodium is available as over the counter in various countries. It is beneficial as it prevents the gastric ulcers, acid indigestion, heart burns which results during the single diclofenac potassium therapy for a long term for osteoarthritis or rheumatoid arthritis, painful menstrual periods, and general pain etc. Even though various methods have been proposed for analysis of FAM and DICLO like HPLC 11, HPTLC 12-14,15 and UV- spectrometric method 13 , but for the first time we are presenting simple, sensitive, accurate, precise, rapid and economic chromatographic method in bulk and in tablet dosage form. No work has been reported for the determination of the FAM and DICLO in combined dosage form by HPTLC method. This paper presents HPTLC method for determination of Famotidine and Diclofenac sodium in combined tablet dosage form. The proposed method is optimized and validated as per the International Conference on Harmonization (ICH) guidelines 16. 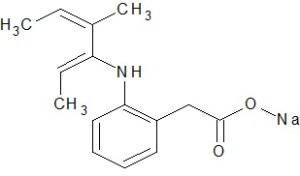 FIG. 1A: CHEMICAL STRUCTURE OF DICLOFENAC

FIG. 1B: CHEMICAL STRUCTURE OF FAMOTIDINE

Materials and Reagents: Diclofenac sodium and Famotidine were provided as a gift sample by Cadila HealthCare Ltd (Vadodara, Gujarat). All other reagents and solvents utilized   were of analytical (AR) grade and are from Merck Chemicals Ltd, Mumbai (India).

Instrumentation and chromatographic condition: Reverse phase chromatography was performed on 20 cm ×10 cm aluminium-backed RP-TLC plates coated with 200-μm layers of silica gel 60 RP-18 F254S were used. Before chromatography the plates were prewashed with methanol and activated at 1050C for 5 min in oven. The samples were applied as 6 mm wide bands with the help of Linomat 5 sample applicator (Muttenz, Switzerland) fitted with a 100-μl sample syringe (Hamilton, Bonaduz, Switzerland). The plate was developed in a pre-saturated Camag twin trough glass chamber (20 cm × 10 cm). Methanol: Water: Triethylamine (7.5: 3.5: 0.5 v/v)were used as mobile phase and chamber saturation time was 30 min.

The plates were developed to a distance of 8.0 cm and scanned densitometrically using Camag TLC Scanner 3 equipped with win CATS software version 1.3.0 at 254 nm for both method. The source of radiation utilized was deuterium lamp emitting a continuous UV spectrum between 200- 400 nm. Evaluation was performed using peak area with linear regression.

Preparation of standard and sample solutions: Independent stock solution of 1000 µg/mL of each DICLO and FAMO were prepared in methanol.

Preparation of calibration curves: From each stock standard solution, 1.5 – 9.0 ml of DICLO and 0.5 - 3.0  ml of FAMO were transferred into six 10 ml volumetric flasks separately and volume was made up to the mark with methanol. From each volumetric flask a volume 1 μl was applied on TLC plate to obtain series of concentration 1500- 9000 ng/band of DICLO and 500 - 3000 ng/band of FAMO. The plates were developed and scanned as described. Each standard in six replicates was analyzed and peak areas were recordedCalibration curves of DICLO and FAMO were plotted separately of peak area vs. respective concentration.

Optimization of HPTLC method: Firstly, single solvents were selected on the basis of their polarity to separate the spots. Then the mixtures of solvents are used for separation purpose of DICLO and FAMO. The spots were developed in mixtures of methanol and water in the ratio of 7.5:3.5 v/v. The Rf value obtained was good but slight tailing was observed. Hence, to reduce the tailing, triethylamine was added in the solvent system. Thus, the final mobile phase consisted of methanol: water: triethylamine in the ratio (7.5:3.5:0.5 v/v). The chamber saturation time was 30 min.The Rf for DICLO and FAMO were found to be 0.54± 0.02 and 0.69 ± 0.02, respectively (Figure 2). 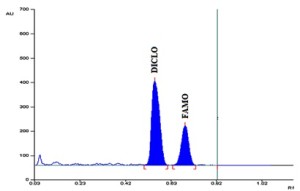 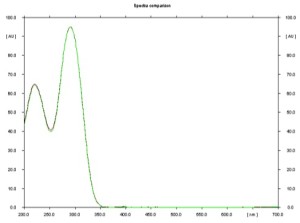 Validation: The method was validated by establishing linearity, accuracy, inter - day and intra - day precision of measurement of sample application. The limit of detection and limit of quantification were also determined.

TABLE 1: LINEARITY OF DICLO AND FAMO FOR PROPOSED METHOD (n=6)

TABLE 2: PRECISION OF DICLO AND FAMO FOR PROPOSED METHOD (n=3)

The spiked samples were then analyzed for three times. The mean recovery is within acceptable limits, indicating the method is accurate for both methods (Table 3).

LOQ and LOD were calculated by the use equation LOD = 3.3 x N/B and LOQ = 10 x N/B, where ‘N’ is standard deviation of the peak areas of the drugs (n=3), taken as a measure of noise, and ‘B’ is the slope of the corresponding calibration curve. The results were recorded for both the methods. Different validation parameters for the both methods for determining DICLO and FAMO content were summarized in (Table 5).

TABLE 5 LOD AND LOQ OF THE METHOD

RESULTS AND DISCUSSION: An RP-HPTLC method was optimized with a view to develop an accurate and reproducible method so as to resolve drugs. Optimization of method was done by altering almost all the chromatographic conditions and the effect on Rf and peak shape were monitored for the drugs selected i.e. DICLO and FAMO. The final chromatographic conditions was  performed on 20 cm × 10 cm aluminum-backed RP-TLC plates coated with 200-μm layers of silica gel 60 RP-18 F254 S (E. Merck, Darmstadt, Germany; supplied by Merck India, Mumbai, India).

The plates were prewashed by methanol and activated at 105 – 110°C for 15 min prior to chromatography. The samples were applied on the plates as bands, under continuous flow of nitrogen, by means of a CAMAG (Muttenz, Switzerland) Linomat-5 sample applicator fitted with a 100-μL syringe. Methanol: water: Triethylamine in the ratio (7.5:3.5:0.5 v/v) showed well- defined and resolved peaks when the chamber was saturated with mobile phase for 30 min at room temperature. Both the peaks were well resolved and no telling observed when plate was scanned at 291 nm. The Rf for DICLO and FAMO were found to be 0.54± 0.02 and 0.69 ± 0.02, respectively.

The results of specificity studies indicated no interference from excipients, impurities which assured that the peak response was due to a single component and it passes peak purity criteria.

CONCLUSION: The modalities adopted in experiment were successfully validated as per ICH guidelines. The proposed RP –HPTLC method was validated by preliminary analysis of standard sample and by recovery studies for the determination of DICLO and FAMO in bulk and in tablet dosage form and the percentage of average recoveries for DICLO and FAMO was obtained 100.56 and 100.17 respectively. Summary of all validation parameter are shown in Table 6. The validated HPTLC method employed here proved to be simple, fast, accurate, precise and robust, thus can be used for routine analysis of DICLO and FAMO in combined tablet dosage form.

ACKNOWLEDGEMENTS: The authors are grateful to Cadila HealthCare Ltd (Vadodara, Gujarat) for providing samples; also, the authors are thankful to Dr.S.J.Surana, Principal, R.C.Patel Institute of Pharmaceutical Education and Research, Shirpur to let us use the well-equipped laboratory for research purpose.