ABSTRACT: A simple, selective, rapid, precise and economical reverse phase high performance liquid chromatographic method has been developed for the simultaneous estimation of hydrocortisone and ketoconazole from pharmaceutical formulation. The method was carried out on a C18 (25 cm × 4.6 mm i.d., 5 μ) column with a mobile phase consisting of methanol: water (adjusted to pH 3.0 using triethylamine) in the ratio of 70:30 v/v. The retention time of hydricortusone and ketoconazole was 3.50 min and 6.00 min respectively with the flow rate of 1mL/ min. Eluents were detected at 221 nm. The linear regression analysis data for the linearity plot showed good linear relationship with correlation coefficient value for hydrocortisone and ketoconazole were R2 = 0.9995 and R2 = 0.9996 in the concentration range of 10 - 40µg. mL-1, 20 - 80 µg. mL-1 respectively. The relative standard deviation for intra-day precision was lower than 2.0 %. The method was validated according to the ICH guidelines. The method was also found to be robust. The developed method was validated in terms of accuracy, precision, linearity, limit of detection, limit of quantification and solution stability.

Experimental: Materials and Reagents: Analytically pure hydro was kindly provided by hetero laboratory, and keto was provided by Mylan laboratory, as gift samples. Analytical grade methanol was purchased from Merck & Co. Glass wares used in each procedure were soaked overnight in a mixture of chromic acid and sulphuric acid rinsed thoroughly with double distilled water and dried in hot air oven. Water (HPLC grade) were purchased from Merck, India. Triple distilled water is used for all purpose.

Optimisation of the Chromatographic Conditions: The mobile phase consisted of methanol and water in ratio methanol: water (70:30), pH was adjusted to 3.0 with tea to water. The contents of the mobile phase were filtered before use through a 0.45μ membrane and degassed for 10 min. The mobile phase was pumped from the solvent reservoir to the column at a flow rate of 1.0 ml/min and the injection volume was 20 μL. The column temperature was maintained at ambient temperature. The eluents were monitored at 221 nm. The results of the optimized chromatogram was shown in Fig. 3 and Table 1.

Preparation of Standard Stock Solutions: Accurately weighed 10 mg of hydro and keto standard were transferred to separate 10 ml volumetric flask and dissolved in 10 ml methanol. The flasks were shaken and volume was made up to the mark with methanol to give solutions containing 1000 μg/ml hydro and 1000 μg/ml keto. From this solution 1 ml was transferred to volumetric flask of 100 ml capacity. Volume was made up to the mark to give a solution containing 100 μg/ml of hydro and 100 μg/ml keto.

Determination of Hydrocortisone and Keto-conazole in their Combined Dosage:

Method Validation: The proposed method has been extensively validated in terms of specificity, linearity, accuracy, precision, limits of detection (LOD) and quantification (LOQ), robustness and reproducibility. The accuracy was expressed in terms of percent recovery of the known amount of the standard drugs added to the known amount of the pharmaceutical dosage forms. The precision (Coefficient of Variation - C.V.) was expressed with respect to the repeatability, intra-day and inter-day variation in the expected drug concentrations. After validation, the developed methods have been applied to pharmaceutical dosage form.

20 μg mL−1 of hydro and 10 μg mL−1 of keto and for this, parameters like plate number (n), tailing factor, HETP, peak asymmetry of samples were measured, and shown in Table 2.

Validation Parameters: Method was validated as per ICH (Q2) guidelines with respect to linearity, accuracy, precision, specificity, robustness, limit of detection and limit of quantification.

Specificity: Commonly used excipients (starch, microcrystalline cellulose and magnesium stearate) were spiked into a pre weighed quantity of drugs. Specificity of the method was shown by quantifying the analyte of interest in the presence of matrix and other components. Blank injections have shown no peaks at retention time of 3.50 min and 6.00 min, the proposed method was specific for the detection of hydro and keto respectively. The selectivity of the method was performed by injecting the solution after the degradation. The degradants formed during solution stability study were well separated from the analyte peak after 20 hrs of sample preparations. Thus the method can be applied to evaluate the stability of the solution.

Linearity: Appropriate volume of aliquot from hydro and keto standard stock solution was transferred to volumetric flask of 10 ml capacity. The volume was adjusted to the mark with methanol to give a solutions containing 10 - 40 μg/ml hydro and 20 - 80 μg/ml keto. The slope, Y-intercept and correlation coefficient were calculated. The regression line relating standard concentrations of drug using regression analysis, the calibration curves were linear in the studied range and equations of the regression analysis were obtained: Y = 56804.9857x + 157033.0714; R2 = 0.9995 for hydro and Y = 58909.4393x + 453271.5356; R2 = 0.9996 for keto respectively. The mean and correlation coefficient of standard curves (N = 3) were calculated. The represented data was shown in below Fig. 4, 5, 6, 7 and Table 3.

TABLE 3: CALIBRATION OF HYDROCORTISON AND KETOCONAZOLE

Accuracy: Accuracy was assessed by determination of the recovery of the method by addition of standard drug to the pre-quantified placebo preparation at 3 different concentration levels 80, 100 and 120%, taking into consideration percentage purity of added bulk drug samples. Each concentration was analyzed 3 times and average recoveries were measured. Results of assay and recovery were presented in the Table 5 and Fig. 9, 10, 11.

Precision: The repeatability was evaluated by assaying 6 times of sample solution prepared for assay determination. The intraday and interday precision study of hydro and keto was carried out by estimating different concentrations of hydro (10, 25, 40 μg/ml) and keto (20, 50, 80 μg/ml), 3 times on the same day and on 3 different days (first, second, third) and the results are reported in terms of C.V. The results are shown in Table 6.

TABLE 6A: INTRA-DAY PRECISION DATA FOR HYDROCORTISONE AND KETOCONAZOLE

TABLE 6B: INTER-DAY PRECISION DATA OF HYDROCORTISONE AND KETOCONAZOLE 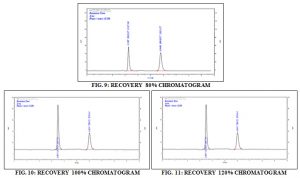 Robustness: The robustness of the method was evaluated by analyzing the system suitability standards and evaluating system suitability parameter data after varying the HPLC pump flow rate (±0.1 ml) and organic solvent content (±2 ml) and pH (±0.2). None of the alterations caused a significant change in peak area R.S.D (%), USP tailing factor and theoretical plates. Although the changes in retention times were more significant, and quantification was still possible. Results of robustness studies are shown in Table 7 and Fig. 12, 13.

Solution Stability and Mobile Phase Stability: The stability of hydro and keto in solution was determined by leaving test solutions of the sample and reference standard in tightly capped volumetric flasks at room temperature for 3 days during which they were assayed at 12 h intervals. Stability of mobile phase was determined by analysis of freshly prepared sample solutions at 12 h intervals for 48 h and comparing the results with those obtained from freshly prepared reference standard solutions. The mobile phase was prepared at the beginning of the study period and not changed during the experiment. The % assay of the results was calculated for both the mobile phase and solution-stability experiments.

CONCLUSION: The present study represents an accurate, precise and specific HPLC method for routine analysis of hydrocortisone and keto-conazole combination in tablet dosage form. In addition to assay it may be used to detect related substance or other impurities which are formed during storage conditions and the analyte of interest could be estimated without any interferences. The use of C18 column in the present work has shown better elution of analytes with good resolution, improved plate count, capacity factor, reduced tailing. So the C18 column can be used to achieve high specificity in shorter time of analysis hydrocortisone to ketoconazole in tablet as per ICH Q2 (R2) guidelines.

The developed UV-spectrophotometric method for simultaneous determination of hydrocortisone and ketoconazole in combined pharmaceutical dosage form is simple and reliable. From the study of validation parameters namely accuracy, precision (SD and RSD), (interday, intraday and different analyst), specificity, linearity and range, it was observed that the method is specific, accurate, precise and reproducible. Hence the method can be employed for routine analysis of dosage form.