ABSTRACT: A new RP-HPLC method was developed and validated for the simultaneous determination of amprolium hydrochloride and sulfaquinoxaline sodium in a powder dosage form. The chromatographic separation was  achieved by isocratic mode with Phosphate buffer  and Acetonitrile (30:70; v/v), as mobile phase and using C-18 RP-Amide (25.0cm × 4.6 mmi.d, 5µ particle size) as stationary phase, with a flow rate of 1.0 ml/min at ambient temperature. The quantification of the analytes was monitored by UV detection at a wavelength of 263 nm. The optimized method was subjected to validation for specificity, accuracy, precision, linearity, range, ruggedness and robustness.  The calibration graphs were linear in the concentration range of 0.08 – 0.12 mg/ml. The results were evaluated as per the International Conference on Harmonization (ICH) guidelines. The precision of the method in terms of RSD is not more than 2% for both the analytes. The method is sensitive, specific, fast and accurate with minimum sample preparation.

INTRODUCTION: Amprolium hydrochloride, 1-[(4 - amino - 2 - propyl - 5 - pyrimidinyl) methyl] - 2 -methylpyridiniumchloride, is an antiprotozoal agent used in veterinary practice for the control of coccidiosis in poultry 1, 2. Sulfaquinoxaline, 4-amino-N-quinoxalin-2-ylbenzenesulfonamide, is a sulfonamide with high anticoccidial potential 3. A combination of both is used in the poultry industry to effectively combat coccidiosis.  Several methods have been published for determination of Amprolium hydrochloride and Sulfaquinoxaline sodium separately using HPLC 4, 5, 6, 7, TLC 8, ion pair chromatography 9 and Spectrophotometry 10.

Also simultaneous estimations using derivatization 11, ion pair chromatography and using HILIC 12 chromatography have been reported. Since both the compounds are highly polar, it is challenging to achieve desired resolution between the peaks.

It was realized that there is no simple and convenient analytical method for regular quality control checks for this powder dosage form. In the present study, a simple, rapid, and accurate method for quantitative estimation of amprolium hydrochloride and sulfaquinoxaline sodium, which are the major components of the formulation in powder dosage forms meant for poultry birds was developed using High Performance Liquid Chromatography. The method was validated with respect to linearity, precision, accuracy and robustness as per the International Conference on Harmonization (ICH) guidelines 13.

Amprolium Hydrochloride and Sulfaquinoxaline sodium standards from sigma were used. Acetonitrile (HPLC grade), and Deionized water were purified using Milli Q water system. All other reagents and solvents used in study were of analytical grade.

A Shimadzu HPLC system equipped with a quaternary pump, auto sampler, photo diode array detector was used. The system was connected with the help of LC solution software in a computer system for data collection and processing.

The chromatographic column used was a C-18 RP-Amide (25.0 cm × 4.6 mm) with particle size of 5 µm. The  mobile phase selected for the assay was prepared by mixing 0.05 M phosphate buffer (pH 5)  and acetonitrile (ACN) (30:70; v/v), shaken well . The mobile phase was filtered using 0.45 µm microporous filter and was degassed by sonication prior to use. The standard and sample solutions were also filtered using 0.45 µ membrane filter. A wavelength of 263 nm was chosen since it was found the most appropriate for the determination of the two active ingredients simultaneously. The flow rate used was 1.0 ml/minute.  The injection volume was 20 µl and the total run time was about 10 minutes.

10 mg of amprolium hydrochloride standard and 10 mg of sulfaquinoxaline sodium were accurately weighed in to a 10 ml volumetric flask and dissolved in mobile phase.  The solution was sonicated for 2 minutes and then made up to the mark with mobile phase.

From the above stock solution, 1 ml was withdrawn into a 10 ml volumetric flask and made up to the mark with mobile phase. The solution was filtered using 0.45 µm membrane filter prior to injecting into HPLC.

FIGURE 1: CHROMATOGRAM OF THE STANDARD SOLUTION OF AMPROLIUM HYDROCHLORIDE AND SULFAQUINOXALINE SODIUM

The linearity of the method was observed within the expected concentration range demonstrating its suitability for analysis. The correlation coefficient (R2) was found to be 0.9988 and 0.9923 for Amprolium hydrochloride and Sulfaquinoxaline sodium respectively. The calibration curves for linearity data is shown in Figure 2 and Figure 3. 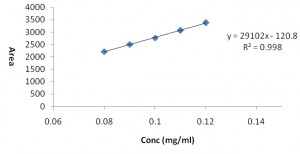 The accuracy of the method was determined by addition of the active ingredients in different concentrations to the placebo matrix. The accuracy was evaluated by the recovery of amprolium and sulfaquinoxaline at three different levels like 80, 100 & 120 % of the label claim. The mean recovery was calculated as shown in Table 2.

Reproducibility: The ruggedness study was carried out for sulfaquinoxaline sodium and amprolium hydrochloride on the powder dosage formulation at 100% level of the final test concentration with different analytical equipment’s on different days. The RSD percentage values showed that the results of the assay of the two active ingredients are within a suitable range of < 2%.

CONCLUSION: The proposed method is simple, sensitive, precise and accurate. There are no additional extraction or separation procedures to extract the actives from the formulation matrix thereby decreasing the error in quantitation.  Also the method is convenient for routine use and is less time consuming. Therefore this method can be applied for routine quality control analysis of a combination of Amprolium hydrochloride and Sulfaquinoxaline sodium in powder dosage forms.

ACKNOWLEDGEMENT: We copiously thank the management of Provimi Animal Nutrition India Pvt Ltd., Bangalore for the support provided throughout the study.