ABSTRACT: Tea tree oil, an essential oil, has claims for analgesic, antimicrobial, antiseptic, and anti-inflammatory activity. Its complex composition is governed by ISO 4730:2017. It is extensively used in skin and hair care cosmeceuticals, often in combination with neem seed oil. Neem seed oil has potent antimicrobial, skin rejuvenating, and conditioning action attributed to the presence of micro constituents and complex lipid composition of triglycerides, diglycerides, and monoglycerides of both saturated and unsaturated fatty acids. Although few methods are available for estimation of individual oils, simple spectrophotometric methods suitable for routine determination of either oil or for simultaneous estimation of both the oils are not reported. A novel, simple, validated UV spectrophotometric method for simultaneous estimation of tea tree oil and neem seed oil in bulk and cosmeceutical formulation has been developed after optimization and validation of UV spectrophotometric method for individual estimation of oils. The method relies on the measurement of absorbance at 267nm and 284nm, λmax of tea tree oil, and neem seed oil, respectively. Linearity is established over a concentration range of 20-160mcg/ml and 0.2-2.0mg/ml for tea tree oil and neem seed oil, respectively. Recovery results are in the range of 101.3-109.8% for neem seed oil and 60.0-69.2% for tea tree oil, respectively. Percent relative standard deviation values for precision, robustness and ruggedness is less than 2%. The validated method confirmed to ICH: Q2 (R1) guidelines and was successfully applied for determining the oil content of a marketed face wash product containing both the actives.

INTRODUCTION: Tea tree oil (TTO), an essential oil obtained by steam distillation of aerial parts of Melaleuca alternifolia has claims for analgesic, antimicrobial, antiseptic, and anti-inflammatory activity 1. Its complex composition is governed by ISO 4730:2017. Terpinene-4-ol is the principal constituent of the oil (35% - 48%) followed by γ-terpinene (14% -28%), α-terpinene (6%-12%) and 1,8-cineole (≤15%). TTO is extensively used in the formulation of skin and hair care cosmeceuticals 2.

There are many cosmeceuticals such as face washes and creams which combine both these active cosmetic ingredient (ACI)s, TTO for its antimicrobial action, and NSO for its antimicrobial, skin conditioning, and rejuvenating properties; therefore, analysis of such products is a herculean task owing to the highly complex and varied composition of essential oils.

There are only a few simple validated methods for the estimation of TTO. A validated HPTLC method has been reported for the determination of TTO content of cosmeceutical formulations by estimating the principal constituent, terpinen-4-ol 8. Likewise, the HPTLC method has been used to determine the terpinen-4-ol content of 5% TTO microemulsion 9. A gas chromatographic method using a flame ionization detector was developed for assay of α-pinene in TTO formulations 10. Ethosomes loaded with TTO were analyzed for oil content by HPTLC method using terpinen-4-ol as reference standard 11.

A few important and useful analytical methods for the estimation of NSO include a simple spectrophotometric method developed in order to determine the solubility of NSO 12, which was successfully adopted for formulation and characterization of solid lipid nanoparticles loaded with NSO for topical treatment of acne 13. A simple and robust spectrophotometric method based on the Hantzsch reaction was used for the determination of neem oil in neem oil coated urea (NOCU) 14. Also, the entrapment efficiency of NSO in poly (3-hydroxybutyrate-co-3-hydroxyvalerate) prepared by supercritical fluid emulsion extraction (SFEE) technique was determined by measuring the absorbance at 287nm using chloroform as solvent 15. A high-performance liquid chromatographic (HPLC) method has been reported for the analysis of azadirachtin in two commercial formulations and neem oil 16.

Instruments: Shimadzu UV 1800 Spectro-photometer and Shimadzu analytical balance were used for the study.

The developed method was validated for various parameters as per ICH: Q2 (R1) guidelines, and parameters of linearity are summarized in Table 5.

The concentration of TTO and NSO in various aliquots and sample solutions were determined by the simultaneous equation as given below. 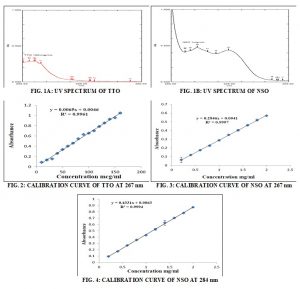 Preparation of Sample Solution: 0.1g of the face wash was weighed accurately into a 25 ml volumetric flask, dissolved and volume made up using the solvent system.

The absorbance of the resulting solution was measured at both wavelengths.

Linearity: Linearity was established over the range of 20-160mcg/ml for TTO at λmax 267nm and 0.2-2.0 mg/ml for NSO at 267nm and λmax 284nm by appropriate dilution of the stock solution with the solvent system and measuring the absorbance of the solutions at the respective wavelength. All determinations were done in triplicate. Limit of detection (LOD) and limit of quantification (LOQ) values were calculated using the formula

respectively, where σ is the standard deviation of the response at low concentration.

Accuracy: Accuracy of the method was determined by the method of standard addition at 80%, 100%, and 120% levels of the select concentration of TTO/NSO. Recovery values are given in Table 6.

TABLE 6: ACCURACY OF THE METHOD

Precision: Intraday precision or repeatability was established by measuring the absorbance of the standard mix solution containing 100mcg/ml TTO and 1mg/ml NSO, respectively, in triplicate. Inter-day precision or intermediate precision was determined by measuring the absorbance of the solution in triplicate on three consecutive days by following the proposed method. Percent RSD was calculated and the data presented in Table 7.

Ruggedness: Ruggedness of the method was determined by measuring the absorbance of the standard solution in triplicate using two different instruments and analysts. Percent RSD was calculated, and the data is presented in Table 8.

Robustness: Robustness of the method was evaluated by measuring the absorbance of the standard solution at 267±1nm and 284±1nm in triplicate, and percent RSD values are presented in Table 9.

TABLE 10: CONTENT OF TTO AND NSO IN FACE WASH

RESULTS AND DISCUSSION: An initial screening study was carried out to select a suitable common solvent to dissolve NSO and TTO to get a stable solution. Solvents chosen for the study were n-hexane, cyclohexane, toluene, dichloromethane and methanol; binary solvent systems like chloro-form-methanol (2:1v/v) and dichloromethane-methanol (3:2v/v). NSO is highly non-polar and insoluble in common solvents such as chloroform, carbon tetrachloride, n-hexane, toluene, and chloroform-methanol (2:1v/v). It was, however, soluble in cyclohexane and freely soluble in di-chloromethane-methanol (DCM-Me OH) (3:2v/v). TTO contains both polar and nonpolar constituents, and the dichloromethane-methanol (3:2v/v) solvent system yielded a stable solution. Dichloromethane-methanol (3:2v/v) was a suitable common solvent system for both NSO and TTO. DCM, widely used for the extraction of lipids, has excellent solvency for various organic compounds. It forms a binary solution with methanol, in which both the oils are readily soluble to yield a stable solution. Spectral scans from 400-250nm were run for NSO and TTO solutions, respectively. Distinct peaks were obtained for both the oils, and also the absorbance remained stable, which may be attributed to the reduced volatility of the solvent system due to the presence of methanol; DCM has a boiling point of 40 ºC and Me OH, 64.7 ºC, respectively.

An optimized and validated UV spectrophotometric method for the determination of NSO and TTO was successfully developed by applying statistical design of experiments (unpublished data). The optimum composition of the solvent system suggested for the method was 54% DCM in methanol. It was observed that TTO exhibits a prominent spectral peak at λmax 267nm alone, whereas NSO exhibits two prominent spectral peaks at λmax 284nm and 324nm, respectively. TTO showed negligible absorbance at 284nm and 324nm, whereas NSO showed significant absorbance at 267nm. Hence absorbance at 267nm and 284 nm respectively were selected for routine simultaneous estimation of both the oils in bulk and a marketed formulation. Simultaneous equation method was applied for calculating the content of TTO and NSO in standard solutions and sample solutions. All determinations were carried out in triplicate. The method was validated as per ICH: Q2 (R1) guidelines for accuracy, precision, ruggedness, and robustness.

Linearity was observed for 20-160 mcg/ml of TTO at 267nm and 0.2-2.0 mg/ml of NSO at 267nm and 284nm, respectively. The linear regression equation and R2 values indicate a good correlation between concentration and the measured absorbance at the respective wavelength. LOD and LOQ for NSO determined at 267nm were high, although R2 value of 0.9997 indicated an excellent correlation between concentration and absorbance. This is acceptable considering the fact that λmax for NSO is 284nm but shows good absorbance at 267nm.

Accuracy of the method was established by carrying out recovery studies at 80%, 100%, and 120% levels of mid-concentration of Beer’s law range of TTO and NSO, which is 1mg TTO and 10mg of NSO, respectively. Results for recovery are tabulated in table 5 and lies in the acceptable range of 80%-120% for NSO. It was observed that recovery of TTO was less compared to NSO i.e., 60.0% - 69.2%, probably due to the presence of volatile components in TTO as observed during the validation of the method for various parameters. In spite of lower recovery values of TTO, the method can still be considered for routine determination in view of unavailable simple analytical methods.

Precision of the method was determined by carrying out intra-day and inter-day determinations, the results of which are given in Table 6. RSD values less than 2% indicate that the method has adequate precision.

Ruggedness of the method was determined by carrying out the analysis by two different analysts and by using two different instruments, the results of which are given in Table 7. RSD values less than 2% indicate that the method is rugged.

Robustness of the method was established by deliberately varying the wavelengths by ±1nm of the selected wavelengths viz, 267nm, and 284nm, respectively. Results are presented in table 8. RSD values less than 2% imply that the method is robust enough to be used for routine analysis.

Finally, the method was applied to determine the content of oils in a marketed face wash formulation. The content of TTO and NSO was found to be 2.05% w/w and 7.35% w/w, respectively Table 9. Verification with label claim was not possible since the current labeling requirements for cosmetics and personal care products do not impose a limit on the amount of active cosmetic ingredients to be included in a formulation nor specify the quantity of ACIs present in the product. TTO, a potent antimicrobial, and anti-inflammatory agent is also a potential skin irritant and must be used with caution 10. TTO content in the product is well within the acceptable limit of 1-5%. TTO, although generally not suitable for dry and sensitive skin owing to its irritancy, is counterbalanced by the presence of a high concentration of neem extract, which helps to address this issue by soothing, moisturizing, and rejuvenating the skin.

CONCLUSION: An attempt has been made to develop a novel UV spectrophotometric method for routine, simultaneous estimation of TTO and NSO in bulk and cosmeceutical formulations. The developed method is simple, rapid, and economical; furthermore, it does not require sophisticated instrumentation. The method, of course, has certain limitations in that; it is non-specific and less sensitive, considering the variable and highly complex composition of the oils. Thus, simultaneous analysis of both oils can be performed in any simple analytical laboratory but only after necessary standardization. However, this study may be of significance to various regulatory bodies in the pursuit of maintaining the highest possible quality standards for cosmeceuticals since it helps in the development and standardization of products containing essential oils.

ACKNOWLEDGEMENT: The authors wish to thank the Government College of Pharmacy and Drugs Control Department, Government of Karnataka, for providing the necessary facilities to carry out research.