ABSTRACT: A novel, simple, rapid and sensitive UV spectrophotometric method has been developed for simultaneous estimation of Gemcitabine and Tamoxifen. Gemcitabine and Tamoxifen show maximum absorbance at 269 nm and 238 nm respectively. The method employs first order derivative method. Here in this method, TAM show zero absorbance i.e Zero Crossing Point (ZCP) at 285 nm and at this wavelength GEM show measureable absorbance and ZCP of GEM is 224 nm and at this wavelength TAM show measurable absorbance. So absorbance of GEM and TAM is measured at 285 nm and 224 nm respectively. Both the drugs obey Beer’s Law in the concentration ranges employed for this method. R2 value of GEM and TAM was found to be 0.996 and 0.998 respectively. Accuracy and reproducibility of the proposed method was statistically validated by recovery studies. Limit of detection and (LOD) and limit of quantification (LOQ) of GEM was found to be 0.02833 and 0.08586 respectively. LOD and LOQ of TAM was found to be 0.09565 and 0.2898 respectively. The method is found to be rapid, precise and accurate and can easily be employed in the laboratory for the routine estimation of drugs

INTRODUCTION: 1-5 Tamoxifen (TAM), (z)-2-[4-(1,2- Diphenyl – 1 - butenyl)phenoxy - N, N -dimethylethanamine is an antagonist of the estrogen receptor in the breast tissue via its active metabolites 4-hydroxytamoxifen. In endometrium, it behaves as agonist, so characterized as selective estrogen receptor modulator.

TAM is also under therapeutic category of bone density conservation agent and antineoplasic agent, hormonal Tamoxifen is endocrine (antiestrogen) therapy for hormone receptor positive breast cancer in pre-menopausal women, and is also strand for post-menpausal. TAM is slightly soluble in water and soluble in methanol, ethanol and acetone.

Gemcitabine (GEM), 2’-Deoxy-2’,2’-difluorocytidine is an antineoplastic anti-metabolite. GEM is also under therapeutic category of antiviral agent, immunosuppressive agent, enzyme inhibitor and radiation sensitizing agent.GEM was found to be a very potent inhibitor of human leukemia cells grown in culture and is since been used in the several types of cancer treatment including  metastatic breast cancer, non-small cell lung cancer, pancreatic cancer and ovarian cancer. It is used in first line treatment of patients with metastatic breast cancer.

Literature survey reveals several methods that have been used for the quantitative determination of the two drugs individually, such as for Gemcitabine(GEM) UV spectrophotometry, HPLC, estimation in pharmaceutical dosage forms by UV spectrophotometry and RP- HPLC and in plasma determination of GEM by HPLC. Tamoxifen (TAM) is estimated by LC and HPLC with UV detection.

International Journal of Pharmacy and Phar

Stock solutions (1000μg/ml) of GEM and TAM were prepared by dissolving separately 100 mg of drug in 100 ml of methanol. The stock solution were suitably diluted to produce solution of concentration 100 μg/ml, and further dilution was done to produce conc. of 10μg/ml, these working solution was scanned in the entire UV range(200-400 nm) to determine the maximum wavelength. Absorption maxima of GEM and TAM were detected at 269 nm (λ1) and 238 nm (λ2), respectively and overlain spectra was recorded. A series of standard dilutions of each drug were prepared having concentration range of 5-25μg/ml. Both TAM and GEM showed linearity with absorbance in the range 5-25μg/ml at their respective maxima. The absorbance was measured at 285 nm for GEM and 224 nm for TAM and calibration curves were plotted at these wavelengths.

Recovery studies were done so as to check the accuracy of the method. The accuracy of the method was assessed by taking known amounts of TAM and GEM in standard mixture solution and absorbance was determined at 224 nm and 285 nm respectively. Concentration of the drugs in the mixture was calculated using the equations. The analysis was done in a set of 3 replicates.

Repeatability is given by interday and intraday precision. The assay and recovery procedures were repeated for three times, on the same day and once for three successive days for both the drugs. Repeatability and Interday precision show in Table 2 & 3 respectively.

TABLE 2: REPEATABILITY STUDY FOR GEM AND TAM FOR 10 µG/ML

TABLE 3: INTERDAY PRECISION FOR GEM AND TAM FOR 10 µg/ml

Absorption maxima of GEM and TAM were detected at 269nm (λ1) and 238nm (λ2), respectively and overlain spectra was recorded (Fig. 1). 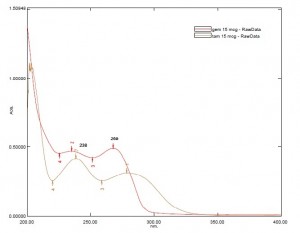 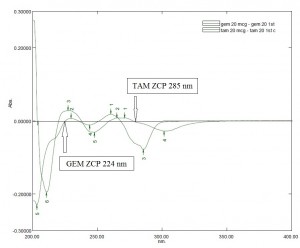 DISCUSSION: The validation parameters were studied at both the wavelengths for the method. Accuracy and reproducibility was determined by calculating the recovery that was close to100%. Precision was calculated as repeatability (SD and %RSD). The proposed method is simple, precise, accurate and reproducible. Due to high sensitivity and simple sample preparation, the method can be used for routine analysis.

CONCLUSION: Simultaneous estimation of GEM and TAM is performed by first order derivative method and method is validated according to ICH Q2 (R1) guideline.

AKNOWLEDGEMENTS: The authors are thankful to Dr. K. Pundarikakshudu, Director of L. J. Institute of Pharmacy, Ahmedabad, India for providing all the facilities and encouragement to carry out the work.