Categories Menu
Home » SIMULTANEOUS STABILITY-INDICATING METHOD FOR THE DETERMINATION OF ABACAVIR, DOLUTEGRAVIR AND LAMIVUDINE BY RP-HPLC

ABSTRACT: A simultaneous stability-indicating reversed-phase high performance liquid chromatography (HPLC) method for analysis of abacavir (ABC), dolutegravir (DTG) and lamivudine (3TC) as the bulk drug and in the formulation was developed. Compounds were separated on Kinetex 5 µ C18 100 A (250 mm x 4.6 mm). A gradient program of mobile phase at different proportions of acetonitrile (ACN) and water was used. The retention times of ABC, DTG and 3TC were 5.2, 8.4 and 3.1 minutes (mins) respectively. The drugs were subjected to the stress conditions of acid, base, oxidative, hydrolytic, humidity, thermal and photolytic degradation. The degradation products were well resolved from main peak and its impurities, proving the stability-indicating ability of the method. The method was linear in the concentration range of 20–100 μg/mL, 2-16μg/mL and 10-80 μg/mL for ABC, DTG and 3TC respectively. The method was accurate and precise with a limit of detection and limit of quantitation of 2.05 and 6.73 µg/ mL, 0.28 and 0.94 µg/ mL and 2.32 and 7.72 µg/ mL for ABC, DTG and 3TC respectively. The method was applied for the analysis of ABC, DTG and 3TC in the presence of its degradation products and commonly used excipients and was found to be specific. The developed method is stability indicating, precise and specific which can be applied for the routine analysis.

INTRODUCTION: Abacavir, (ABC) 1 which is chemically (1S,cis) – 4 - [2-amino-6(cyclopropyl amino)-9H-purin-9-yl]-2-cyclopentene-1-methanol sulfate,  is a carbocyclic synthetic nucleoside analogue. Intracellularly, it is converted by cellular enzymes to the active metabolite carbovir triphosphate. Carbovir triphosphate is an analogue of deoxyguanosine-5`-triphosphate (dGTP). Carbovir triphosphate inhibits the activity of HIV-1 reverse transcriptase (RT) both by competing with the natural substrate dGTP and by its incorporation into viral DNA. 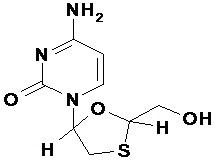 Lamivudine(3TC) 1 which is chemically(2R,cis)-4-amino-1-(2hydroxymethyl-1,3-oxathiolan-5-yl)-(1H)-pyrimidin-2-one is a synthetic nucleoside analogue. Intracellularly, it is phosphorylated to its active 5′-triphosphate metabolite, lamivudine triphosphate (L-TP). The principal mode of action of L-TP is the inhibition of HIV-1 reverse transcriptase (RT) via DNA chain termination after incorporation of the nucleoside analogue into viral DNA. 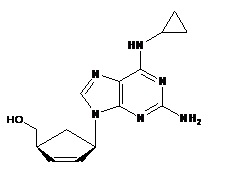 There are several reported spectrophotometric 2-4 and chromatographic 5-7 methods in the literature for analysis of ABC, DTG and 3TC individually but there is no reported method for the simultaneous stability indicating assay of the drugs in combination. Hence LC method that was developed in the present work is advantageous because it enables stability indicating, accurate, specific and reproducible analysis of ABC, DTG and 3TC.

ACN - water 60:40 v/v mixture was used as diluents which was prepared by mixing 600 mL of ACN and 400 mL of water in a 1000mL volumetric flask. The mixture was filtered through 0.45 μ membrane filter and sonicated before use.

A standard solution was prepared by dissolving 60 mg, 5 mg and 30 mg of ABC, DTG and 3TC with diluent in a 100 mL volumetric flask and was sonicated for 30 min. From this, working standard solutions of 60μg/mL, 5μg/mL and 30 μg/mL of the drugs were prepared by appropriate dilutions using diluent.

20 tablets were weighed and average weight of each tablet was taken and then powder equivalent to 60 mg, 5 mg and 30 mg of abacavir, dolutegravir and lamivudine was transfered into a 100 mL volumetric flask, 30 mL of diluent was added and sonicated for 30 min, further the volume made up with diluent and filtered. From the filtered solution, 1.0 mL was pipetted out into a 10 mL volumetric flask and made up to 10 mL with diluent.

Compounds were separated on a Kinetex 5 µ C18 100 A(250 mm x 4.6 mm) column with gradient program of ACN – water [Table 1] as mobile phase at a flow rate of 1 mL/min. Chromatography was performed at room temperature and the detection was carried out at 258 nm.

All these solutions except for photo degradation were prepared in amber volumetric flasks. After completion of the degradation treatments the samples were cooled to room temperature, diluted with the diluent, and injected for chromatographic analysis.

The method was validated in accordance with recognized guidelines 10, 11.

To demonstrate the specificity of the method, in house placebo formulation containing only excipients was subjected to the methods of sample preparation and analysis described above. Forced degradation samples were also analysied by the above described method to establish its specificity.

The accuracy of the method was determined by measurement (n = 3) of recovery by spiking the in house placebo with 50, 100, and 150% of the drug.

LOD and LOQ were determined as the amounts for which the signal-to-noise ratios were 3:1 and 10:1, respectively.

Robustness of the method was assessed by varying the instrumental conditions such as flow rate (±2%), proportion of the organic content in the mobile phase (±2%) and wavelength (±2 units).

Stability of the Analytial Solutions:

The bench top stability of abacavir, dolutegravir and lamivudine in the diluent was assessed by injecting a working standard solution at 0, 6, 8,12 and 24 h after preparation (n = 3).

The retention times of ABC, DTG and 3TC under the chromatographic conditions described above were 5.2, 8.4 and 3.1 mins respectively [Fig. 2.a]. Peaks at 5.2, 8.4 and 3.1 min were observed in chromatograms of the drug samples extracted from the in house formulation [Fig. 2. b]. Assay caluculations are given in Table no. 2. System suitability data is given in table no. 3 where it is evaluated by theoretical plates and tailing factor. The peaks of the degradation products were well resolved from that of ABC, DTG and 3TC [Fig. 2e–j]. There was no interference from the excipients commonly present in the formulation and from the mobile phase. It may therefore be inferred that no degradation of ABC, DTG and 3TC in the pharmaceutical formulation was detected by using this method.

The recovery data listed in, obtained from a study of the in house placebo formulation, ranged from 99.86-100.00 % for ABC, 99.64-101.04% for DTG and 99.94-100.24 for 3TC with low RSD values for all the drugs. This quantitative recovery of the drugs indicates that there was no interference from excipients present in the formulation and the method is accurate whose results are shown in Table 6. ABC, DTG and 3TC were found to be stable in the mobile phase for a period of 24hours, because no peaks corresponding to degradation products were observed and there was no significant change in the peak area of the drug (RSD <1%).  The deliberate changes in the method have not much affected the peak tailing, theoretical plates and the percent assay. This indicates that the present method is robust. Table 7. Results of Degradation Studies are given in Table 8.

Chromatograms obtained from drugs and its degradation products: 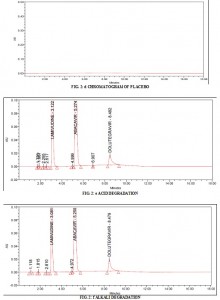 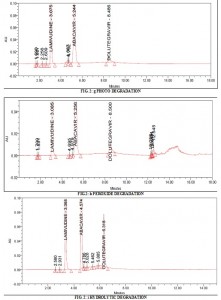 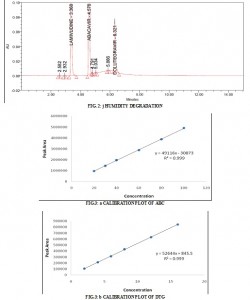 TABLE 4: LINEARITY OF THE PROPOSED METHOD