ABSTRACT: The urease (E.C.3.5.1.5) catalyzes the hydrolysis of urea to ammonia and is commonly used in clinical laboratories for the estimation of urea in biological fluids. The urease enzyme of sword bean (Canavalia gladiata) has been purified in single-step by affinity chromatography using epoxy activated agarose containing urea as the affinity ligand. The yield of the purified enzyme was about 83% with specific activity of about 495 U/mg of protein with 14-fold purification. The final preparation had a transparent appearance with free ammonia content less than 0.01 µg/unit and was stable for 15 months at 4-8°C. The enzyme acted optimally at pH 7.5 and 25°C. Thermal stability studies indicated that at pH 7.5 no loss of enzyme activities were recorded up to 35°C for 30 mins. SDS−polyacrylamide gel electrophoretic analysis showed that the purified enzyme was apparently homogeneous and had a molecular weight of approximately 87 kDa. Single band was observed in both native and SDS-PAGE.

INTRODUCTION: Urease (urea amidohydrolases; E.C.3.5.1.5) is a nickel dependent enzyme 1-2 that catalyzes the hydrolysis of urea to form ammonia and carbon dioxide with a rate of approximately 1014 times faster than the rate of non-catalyzed reaction. Urease has a wide range of applications in medical science, diagnostic purposes, food industry and in technical fields 3-7. It is well known that urease has been widely used for the determination of urea in blood and urine in clinical diagnosis / chemistry.

Many researchers 8-10 have purified urease from various sources to apparent homogeneity using extraction with organic solvent, precipitation with ammonium sulfate, ion exchange, gel-filtration and covalent chromatography techniques. However, the purification procedures published in the literature are long and time consuming and result in the low yields in enzyme activity, presumably due to its tendency to undergo association-dissociation reactions under non-denaturing conditions10.

Urease is found extensively from various bacteria, fungi and higher plants 11-13. Most of the commercially available urease comes from jack bean (Canavalia ensiformis) and it is the best characterized plant urease 13-15, which does not grow well in Bangladesh. In our laboratory we have tested alternative sources more locally available and studying their properties as possible substitutes for jack bean urease. Based on a previous screening experiment from our laboratory, it has been shown that watermelon, yard long bean, arahar dal, sword bean etc. contain considerable amount of urease. Among them sword bean (Canavalia gladiata) contains the highest amount of urease.

This investigation reports a single step purification system for urease from sword bean using a specific ligand affinity chromatography technique. The optimal conditions described here are for preparing liquid forms of sword bean urease with properties which meet the prerequisites needed for clinical use. These include purity, clarity, stability and low content of free ammonia. Some properties of the partially purified urease, such as pH optimum, heat stability and polyacrylamide gel electrophoretic patterns were determined.

Materials and Chemicals: The sword bean was cultivated at the Dept. of Applied Chemistry and Chemical Engineering, University of Rajshahi premises. Agarose gel was prepared in laboratory using agarose powder from Sisco Research Laboratories Pvt. Ltd (India).  2-mercaptoethanol was purchased from LobaChemica, India. EDTA and Sodium azide were from BDH Chemicals Ltd (England). Urea was obtained from Sigma-Aldrich. The standard urea kit was purchased from “Crescent” (Crescent Diagnosis, Saudi Arabia). Other chemicals were of analytical grade.

Urease Assay: Urease activity was quantified by following the release of ammonia from urea by means of modified Berthelot reaction. The enzymatically liberated ammonia was calculated from a previously established standard curve using ammonium sulfate as a standard. Results were expressed in units, with 1 enzyme unit equivalent to 1 µmol of ammonia liberated from urea per min per mg of protein. The assays were performed at 37°C for 3 mins and carried out in duplicate or triplicate. Specific activity was expressed in U/mg protein.

Purification of Urease: Agarose gel was prepared by emulsification technique using agarose powder 16. Laboratory prepared agarose beads were used as the supporting matrix in this investigation. The activation of agarose gel with epichlorohydrin was carried out in alkaline medium for 2 hours at 40°C. After reaction, the epoxy activated gels were washed with deionized water until it became neutral. Affinity ligand urea was coupled with epoxy activated agarose in presence of sodium carbonate. Reaction was carried out at 60°C for 2 hrs. Unreacted epoxygroups were deactivated by 0.5 M 2-aminoethanol pH 8.0 for 8 hrs at 60°C. Finally the excess uncoupled ligands were washed out by low and high pH buffer.

Sword bean meal (20 g) was homogenized with 100 ml of 20 mM sodium phosphate buffer, pH 7.0 containing 1 mM EDTA and 1 mM 2–mercaptoethanol for 1 hour at 4°C. The suspension was filter through double layer silk cloth. The filtrate was collected and centrifuged at 8,000 rpm for 10 mins to remove any solid materials. The clear supernatant (45 ml) was used as primary crude extract.

The adsorbed enzyme was eluted with a stepwise gradient of urea from 0 to 30 mM urea in 20 mM sodium phosphate buffer, pH 7.0 (containing 1 mM EDTA and 1 mM 2-mercaptoethanol) system and fraction containing enzyme activity were pooled and the pH was immediately adjusted to the 7.0 with dilute HCl due to the action of urease on the elution buffer containing urea. The eluted enzyme was dialyzed against deionized water in order to removing adhere salt and subjected to lyophilization to concentrate.

Protein and Ammonia Content Determination: Protein concentration was determined by Biuret method using bovine serum albumin as a standard. Free ammonia content in the purified urease was determined according to modified Berthelot reaction. Enzymatically liberated ammonia reacts with the salicylate and hypochlorite to form a green colored indophenol and the absorbance was measured at 578 nm. Protein and ammonia content determination were carried out in triplicate.

Native polyacrylamide gel electrophoresis (PAGE) and SDS–PAGE of protein samples were carried out according to Davis 17 and Laemmli 18 respectively and stained with Coomassie brilliant blue dye. The specific detection of urease activity in native gels was performed using lead acetate as reported previously.

The results presented herein reveal that sword bean urease was purified to apparent homogeneity using a single step purification scheme on epoxy activated agarose containing urea as the affinity ligand. Table 1 shows the purification summary. The recovery of the purified enzyme preparation by this scheme was 83%. On the other hand, the specific activity of the purified enzyme preparation was 495 U/mg protein which represented 14-fold purification. The electrophoretic behaviors of crude and purified samples are shown in Figure 1.

Two identical gels were subsequently stained for protein and urease activity. SDS-PAGE showed that the purified urease gave only one band and by using different standard proteins of known molecular weights it was found that the apparent molecular weight of Canavalia gladiata urease is 87 kDa (Figure 1). 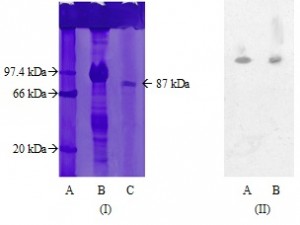 In the case of activity staining, the urease activity was detected in one band which coincided with the major protein band. The effect of 0.1% sodium

azide as disinfectants on the enzyme activity was examined in order to avoid the contamination of the enzyme with microorganisms and it has been shown that in the presence of sodium azide the stability of purified enzyme continued until 220 days (Figure 2). 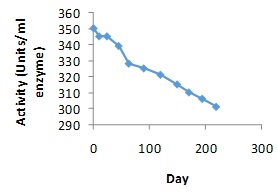 FIGURE 2: EFFECT OF 0.1% SODIUM AZIDE ON THE STABILITY OF SWORD BEAN UREASE SOLUTION.

Addition of 1 mM 2-mercaptoethanol as a reducing agent to the purified enzyme in presence of sodium azide (0.1%) increased the stability of urease up to 15 months (455 days) (Figure 3). The free ammonia content in the purified sword bean urease was less than 0.01 µg/unit. The pH profiles for ureases were established using a pH range from 5 to 10. The affinity purified enzyme showed maximum activity at pH 7.5 (Figure 4). The thermal stability studies of the purified urease were examined (Figure 5). 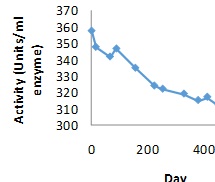 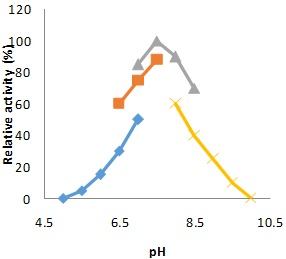 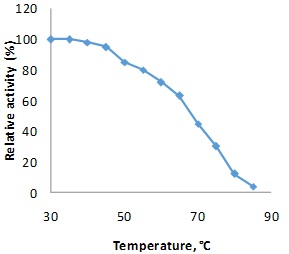 FIGURE 5: EFFECT OF TEMPERATURE ON STABILITY OF SWORD BEAN UREASES.

The enzymes were incubated in 20mM sodium phosphate buffer, pH 7.5 at different temperatures ranging from 30 to 90°C for 30 mins. After incubation aliquots were withdrawn and placed into tubes in ice, and assayed for remaining activity prior to substrate addition. No loss of urease activity was recorded up to 35°C, while 25% loss of its activity was recorded at 60°C, respectively. The activity gradually decreased with increasing temperature and at 90°C, activity was completely lost.

ACKNOWLEDGEMENT: The authors are thankful to the Department of Applied Chemistry and Chemical Engineering, University of Rajshahi, Bangladesh for giving us laboratory facilities for the research works.