Aceclofenac is an analgesic and anti-inflammatory agent used in the management of osteoarthritis, rheumatoid arthritis and ankylosing spondylitis.  The objective of the present work was to investigate the effect of different types of carriers such as polyvinyl pyrrolidone (PVP), polyethylene glycol (PEG) 6000 and sodium lauryl sulphate (SLS) as solubilizer on in vitro dissolution of aceclofenac. Aceclofenac solid dispersions were prepared using 3² factorial design by fusion and solvent evaporation method with PEG 6000, PVP & SLS.  Prepared aceclofenac solid dispersions were evaluated for physical appearance, drug content uniformity, and in vitro dissolution studies.  The dissolution was determined by USP XXIII apparatus using phosphate buffer pH 7.4. The highest aceclofenac dissolution rate, 99.87% in 60 minutes, was obtained from solid dispersion containing SLS (ASS7) prepared by solvent evaporation method.  The general trend indicated that there was an increase in dissolution rate for solid dispersions prepared in following order SLS>PVP>PEG 6000.  IR and DSC studies showed no chemical change between drug and polymer and aceclofenac is homogeneously distributed in an amorphous state within the carrier and no aceclofenac crystallized out of the dispersions.  The formulations studied were found to be stable.  Finally it may be concluded that, dissolution rate of aceclofenac can be increased by solid dispersion technique, which may be due to increased hydrophilic nature of carrier and also possibly due to reduction in drug crystallinity.

INTRODUCTION: Poorly water-soluble drugs are increasingly becoming a problem in terms of obtaining the satisfactory dissolution within the gastrointestinal tract that is necessary for good bioavailability.  It is not only existing drugs that cause problems but it is the challenge of medicinal chemists to ensure that new drugs are not only active pharmacologically but have enough solubility to ensure fast enough dissolution at the site of administration, often gastrointestinal tract 1.

Solubilization is the process by which the apparent solubility of a poorly water soluble substance is increased. Solubilization techniques include addition of a cosolvent, salt formation, prodrug design, complexation, particle size reduction, and the use of surface active agents (Micellization) 2. Use of solvate and hydrates 3, polymorphs 4, hydrotrophy 5, use of absorbents 6, pH adjustment, solubilizing vehicles, etc. are the some other physico-chemical approaches to enhancing oral absorption of poorly water soluble drugs.

Solid dispersion technology is the science of dispersing one or more active ingredients in an inert matrix in the solid stage in order to achieve increased dissolution rate, sustained release of drugs, altered solid state properties, and enhanced release of drugs from ointment and suppository bases, and improved solubility and stability 7. Solid dispersions are prepared by various methods like Fusion process, Solvent process, Fusion Solvent process and Supercritical fluid process 8. Various methods, which can contribute information regarding the physical nature of the solid dispersions, are thermo analytical methods (Thermal Analysis 9, DSC 10, X-ray Diffraction Methods 11, Spectroscopic Methods and Microscopic Methods 9). Aceclofenac is aceclofenacum (O- (2, 6-dichloroaniline) phenyl] acetate glycolic acid ester, 2-(2, 6-dichloraniline) phenyl acetoxyacetic acid.  Aceclofenac is a NSAID.  It is used in the management of osteoarthritis, rheumatoid arthritis and ankylozing spondylitis.  Aceclofenac when taken orally shows gastrointestinal disturbances such as GI discomfort, nausea, and diarrhea.  In some patients peptic ulceration and severe gastrointestinal bleeding may also occur 12.

Solid dispersion technology can be used to improve the in vitro and in vivo dissolution properties of dissolution dependent poorly water soluble drugs. PEG’s, PVP 13 and surfactant like SLS 14 have been reported to be used for increasing the solubility of poorly soluble drugs. The usual dose of aceclofenac is 100 mg given twice daily by mouth.  The initial dose should be reduced to 100 mg daily in patients with hepatic impairment.  Its low solubility makes it a suitable candidate for solid dispersion systems.

Methods of Preparation of Aceclofenac Solid Dispersion System: Solid dispersions of aceclofenac in PEG 6000, PVP & SLS were prepared using 3² factorial design with PEG 6000, PVP & SLS and aceclofenac as variables and maintaining the amount of lactose and MCC (4:1) as constant (table 1).  The methods used for the preparation of these solid dispersions were physical mixtures, solvent evaporation method and fusion method.

TABLE 1: FACTOR & LEVELS IN THE DESIGN OF ACECLOFENAC SOLID DISPERSIONS WITH DIFFERENT POLYMERS

(Amount of other additives - lactose and MCC (4:1) was maintained constant in all the preparations);

Batches were made with the aid of factorial design

Physical Appearance: All the batches of Aceclofenac solid dispersions were evaluated for color and appearance.

Determination of Aceclofenac Content: An accurately weighed amount of each preparation was dissolved in small volume of methanol and further diluted with methanol.  The content of aceclofenac was determined spectro- photometrically at 275 nm using Shimadzu UV-visible spectrophotometer.

In Vitro Dissolution: The dissolution study was carried out using USP XXIII apparatus type-II (Electrolab TDT-OCT).  The dissolution medium was 900 ml, 7.4 pH phosphate buffer kept at 37±1oC.  The drug or physical mixture or solid dispersions was taken in a muslin cloth and tied to the rotating paddle kept in the basket of dissolution apparatus, the basket was rotated at 50 rpm.  Samples of 5 ml were withdrawn at specified time intervals and analyzed spectrophotometrically at 275 nm 17 using Shimadzu- 1700 UV- visible spectrophotometer; the samples withdrawn were replaced by fresh buffer solutions.  Each preparation was tested in triplicate and then, mean values were calculated.

Statistical Comparison: The dissolution release kinetics and result of best fit model among the preparations were also compared.

Stability Studies: The stability studies should be conducted on the drug substance packaged in a container closure system is the same as or simulates the packing proposed for storage and distribution. Stability studies on various batches like ASG7, ASV7, ASS7, AFG7 and AFS7 were carried out by storing 1 gm of solid dispersions in an amber colored screw capped bottle at different temperatures for a period of 3 months.  The solid dispersions were visually examined for any physical change and drug content was estimated at the end of 3 months 18.

Differential Scanning Calorimetry: Differential scanning calorimetries (DSC) of some selected preparations were compared with plain aceclofenac, PVP, PEG 6000 and SLS was carried out.  The DSC (pyris-6) thermograms were recorded at a heating of 10 oC/ min from 100oC to 300oC.

Stability Studies of Selected Batches of Solid Dispersions: Some selected solid dispersions were considered for stability studies.  Formulations were stored at 40oC as per ICH guidelines.  The drug content assayed after 3 months did not show any significant change (table 3). 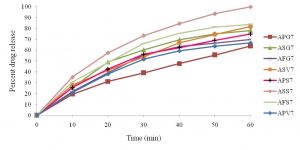 Finally, it may be concluded that, dissolution rate of aceclofenac can be increased by solid dispersion technique which may be due to increased hydrophilic nature of the carrier and also possibly due to reduction in drug crystallinity.