ABSTRACT: The main aim of this study was to prepare solid dispersion of Candesartan cilexetil so as to improve its solubility and dissolution characteristics in order to enhance its oral bioavailability. Solid dispersion was formed by fusion method. 9 formulations (F1-F9) were prepared using different carriers i.e. Sorbitol, Polyethylene Glycol (PEG 6000) and Poloxamer 407 at different ratios of 1:1, 1:3, 1:5 each. Out of 9 formulations, F3, F5 and F9 formulation compositions were selected on the basis of solubility, % yield, drug content, in-vitro dissolution studies. F3, F5 and F9 formulations were further formulated in 3 batches (A, B, C) into conventional dosage forms (tablet) with ingredients such as lactose, SSG, MCC, magnesium sulphate, and talc. On the basis of physical and chemical evaluation (Disintegration and dissolution studies), F9 was considered as the optimized formulation. The Optimized formulation, F9 i.e. Batch C was further compared with the Marketed formulation (Atacand, 4 mg) and stability studies were performed according to ICH guidelines. The optimized formulation of solid dispersion of Candesartan cilexetil (F9) has showed tremendous solubility, dissolution as well as other characteristic and can be used for hypertension and explore, further.

INTRODUCTION: “Solid dispersion” has become an established solubilisation technique for poorly water soluble drugs in order to enhance the dissolution and oral bioavailability. Although there are various techniques such as particle size reduction, micronization, physical modifications, complexation, solubilisation, co solvency etc. which can enhance solubility and dissolution rate of insoluble drugs but these techniques have some practical limitations, solid dispersion technique overcome these practical limitations 1.

Carriers which are soluble and dissolve in water at a faster rate are widely used in pharmaceutical industries. The increase in dissolution rate of the drug may be due to the increase in wettability, hydrophilic nature of the carrier and due to reduction in particle size 3. Fusion method has been used in order to prepare solid dispersion of active pharmaceutical ingredient by incorporating different carriers.

So, several water soluble carriers such as methyl cellulose, urea, lactose, polyvinyl pyrrolidone and polyethylene glycols and poloxamers are used as carriers for solid dispersion 4.

Candesartan is an angiotensin II receptor antagonist mainly used in the treatment of hypertension. Candesartan is classified under class II according to Biopharmaceutical classification system i.e. the drug shows low aqueous solubility and high permeability. Hence, the rationale of selecting the drug was to attain adequate concentration on improving the drug dissolution characteristic when administered as a tablet for better control of hypertension. Therefore, the objective of this study was to improve the dissolution characteristics of Candesartan cilexetil tablets in order to enhance its solubility and oral bioavailability using Solid dispersion technique via fusion method.

Solid dispersions Formulations (F3, F5 and F9) with best outcome result of in-vitro dissolution were formulated into conventional dosage form. Tablets were prepared by direct compression method 8. All the ingredients were accurately weighed and screened through sieve no. 40. The mixture is compressed using 8 mm flat face punch on eight stages rotary tablet compress machine. All tablets contains Lactose as tablet filler and binder, SSG as disintegrant and dissolution aid, MCC as dispersing and stabilizing agent and Magnesium stearate as lubricant. Formulation chart is mention in the Table 2.

The powder blend prepared for tablets were characterized with respect to Angle of repose, Bulk density, Tapped density, Hausner’s ratio and Carr’s index. Micromeritics properties of all the prepared batches i.e. Batch A, Batch B and Batch C were evaluated before tablet compression by the same procedure used to determine the flow property of pure drug. The general appearance of a tablet includes shape, size, colour, surface texture etc. All the studies were performed in triplicate. Thickness was measured with the help of Vernier Callipers. All the studies were performed in triplicate 12. Tablet hardness can be determined by using Monsanto hardness testers or Pfizer testers. Hardness of 10 tablets was determined and the average hardness was calculated 13. The instrument used for this test is known as “friabilator”. 20 tablets were weighed accurately before and after introducing them into the friabilator and subjected to 100 revolutions 12. Twenty (20) tablets were selected at random and weighed individually using digital weighing balance. The average weight of one tablet was determined from the collective weight. Not more than two of the individual weight deviates from the average weight by more than percentage shown in the table and not by more than twice that percentage 14.

It was done through disintegration test as well as in-vitro dissolution studies. Disintegration test was carried out on 6 tablets using the disintegration test apparatus. Distilled water at 37.5 °C was used as a disintegration media and the time taken for the complete disintegration of the tablet was measured in seconds 15. The in-vitro release study of Candesartan cilexetil tablets was done by using USP type II dissolution apparatus with the rotation speed of 50 rpm using Phosphate buffer pH 6.8 as dissolution medium maintained at a temperature 37 ± 0.5 °C. Samples were withdrawn at specific time intervals and filtered through Whatman filter paper, diluted suitably and analyzed at 255 nm for cumulative drug release using UV spectro-photometer 16, 19 - 21.

The quality and physicochemical equivalence of marketed brand of Candesartan cilexetil and optimized tablet of Candesartan cilexetil were accessed. The assessment included the evaluation of uniformity in weight, friability, hardness, disintegration and dissolution tests as well as chemical assay of the tablets. All the studies were performed in triplicate.

The stability study of optimized formulation was performed as per ICH guidelines. Tablets were evaluated for any statistical difference in their uniformity of weight, hardness, friability, disintegration and dissolution tests as well as chemical assay 17 - 21. All the studies were performed in triplicate. The results of stability studies were plotted and analyzed on Sigma Plot 10.0 software by using pharmacological tool. 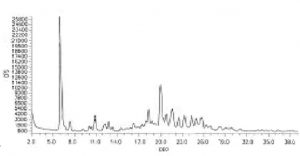 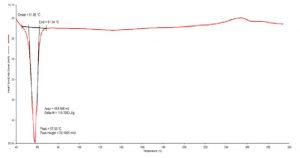 Pure drug (Candesartan cilexetil) was formulated into solid dispersion tablets. The selected formulations F3, F5 and F9 were coded as Batch A, Batch B and Batch C. Tablets (150 mg) of Batch A, Batch B and Batch C were prepared by direct compression method. Finally, tablets were evaluated for various significant parameters to ensure the formation of a quality product. The powder blend prepared for tablets were characterized with respect to Angle of repose, Bulk density, Tapped density, Hausner’s ratio and Carr’s index. The result of pre-compression evaluation of powder blend for tablets was given in Table 5. The thickness was found in the range of 2.12 ± 0.36 to 2.40 ± 0.20 mm. The measured hardness of the tablets of each batch of all formulations was found in the range of 5.2 ± 0.52 to 6.2 ± 0.78 Kg/cm2 and the results are shown in Table 6. The value of friability test ranges from 0.37 ± 0.12% to 0.52 ± 0.10% tabulated in Table 6.

DISCUSSION: Slower dissolution rate is the biggest problem associated with the oral dosage forms of poorly soluble drugs and often acts as a rate limiting factor for bioavailability of such drugs. Major problems associated with oral drugs are its low solubility in the body fluids which may result into poor bioavailability after oral administration. Candesartan cilexetil is an antihypertensive drug with low aqueous solubility, high permeability and shorter half-life. Hence, this drug is a good candidate for the solid dispersion development. Candesartan cilexetil is a drug of choice since it has higher affinity for angiotensin receptor and can be eliminated by both hepatic and renal excretion.

The rationale of this study was to improve solubility and dissolution rate of this drug thereby increase the frequency of administration and patient compliance by preparing solid dispersion. Preformulation studies were carried out to derive ideal properties of drug like Flow properties, Solubility profile, Partition behaviour and Drug-excipients compatibility studies. Solid dispersion using hydrophilic polymers as carrier substances were prepared to improve the dissolution rate of the selected model drug via fusion method.

Out of 9 Formulations, 3 Formulations (F3, F5, F9) were selected for Tablet preparation and evaluation. Tablets were prepared with all the three best outcome results of in-vitro dissolution of solid dispersions for precise comparison of formulations and coded as Batch A (F3), Batch B (F5), Batch C (F9).

From the above study, Batch C was found to be the Best formulation i.e. Optimized formulation. The Optimized Formulation is compared with Marketed Formulation. Stability studies clearly specified that the formulation (Batch C) is highly stable with a shelf life of 916 days. The solid dispersion was stable under accelerated storage conditions.

CONCLUSION: Depending on the experimental data it was concluded that the type of carrier and drug-carrier ratio were the critical factors for the development of solid dispersions. Therefore it was concluded that solid dispersion of Candesartan cilexetil using hydrophilic polymers such as Poloxamer 407, would improve the dissolution rate and solubility of the drug and thereby enhancing its systemic bioavailability.

ACKNOWLEDGEMENT: The authors are grateful to Chairman/Management of PDM Group of Institutions; College of Pharmacy for providing and support for carrying out the research work.

CONFLICT OF INTEREST: There is no conflict of interest / competing interest. This work is original and nothing has been plagiarised to the best of my knowledge.