ABSTRACT: Nature is an eminent source of potential therapeutic drugs, however; most of the herbal bioactives are left unexploited as precise remedies due to lack of appropriate formulation design and development. Pharmacological interventions of herbal molecules may often be limited due to insufficient solubility, bioavailability as well as instability aspects and it remains one of the most challenging facet for pharmaceutical scientists worldwide. Solid dispersion is one of the well established and convenient techniques for improving the oral absorption of drugs with poor aqueous solubility and dissolution rate. The objective of present study is to enlighten the role of solid dispersion approach for enhancement of solubility and bioavailability profile of various natural moieties. The manuscript also aims to summarize the important features of solid dispersions, carriers utilized, classification, preparation methods and characterization parameters. Numerous and significant research findings in the vistas of phytoconstitutents based solid dispersions are also discussed.

INTRODUCTION: Herb is a plant or part of a plant valued for its medicinal, aromatic or savoury qualities1. These botanicals are known to contain one or many chemical constituents that may have significant therapeutic purposes 2. The belief that natural medicines are much safer than synthetic drugs has gained popularity in recent years and led to tremendous growth of various phytopharmaceutical usage. Herbal medicines are also now in great demand in the developing world for primary healthcare and recent developments in the avenue of herbal drug delivery efficiently manage several human diseases 3.

The herbal drug technologies have facilitated the drug utilization of phytoconstituents and bioactives in a more precised manner 6. Interest in natural product research has been rekindled by discoveries of various novel natural molecules. But, therapeutic potential of natural molecules may often be limited by low solubility, bioavailability and instability associated with herbals. Exploration of solid dispersion technique provides various advantages including enhancement of solubility and bioavailability, protection from toxicity, enhancement of stability, sustained delivery, protection from physical and chemical degradation etc 7.

Hence, there is a great potential for valuable herbal drugs to be formulated into solid dispersions which subsequently facilitates the safe, effective and convenient delivery of natural bioactive constituents in an efficient and controlled manner 8.

The oral route of drug administration is the most common and preferred method of delivery due to convenience and ease of administration 9, 10. Among the various dosage forms available for oral administration, solid dosage forms have many advantages over other types of dosage forms owing to greater stability, diminutive bulk, accurate dosage and easy production.

Therefore, most of the new molecules under development are intended to be utilized as solid that originate an effective in vivo plasma concentration after oral administration 11. But, the major problem associated with most of the drugs is inadequate solubility in biological fluids that ultimately limits their bioavailability and utility after oral administration 12. The natural products with therapeutic benefits like curcumin13, dihydroartimisinin 14, biochanin A 15 are poorly water soluble and not well absorbed after oral administration which detract them from inherent efficacy 16. Moreover, low aqueous solubility and membrane permeability of a drug molecule consequently retard the drug absorption from gastrointestinal tract 11.

The insufficient solubility may be due to high crystallinity/high melting point of pharmacologically active compounds that leads to formation of zwitterion, insoluble salts and H-bonding network. Hydrophobicity/High log P is another reason for inadequate solubility due to lack of ionizable groups and high molecular weight17, 18.

The drugs can be categorized into four classes according to biopharmaceutical classification system depending on in vitro solubility and in vivo permeability data as depicted in Table 119-21.

Among the four classes, class II drugs show poor solubility and high permeability. Therefore, their low ability to dissolve is a limitation to their overall rate and extent of absorption over their ability to permeate through the membrane. Hence, the formulation design for class II compounds should focus on the enhancement of aqueous solubility or dissolution rate 19. Once these drugs dissolve, they rapidly pass through biological membranes such as the gastrointestinal wall13, 22.

Development of an optimized and more bioavailable formulation of a particular drug is a herculean task 23.  Several methods have been employed to enhance the solubility, dissolution and subsequently bioavailability of drugs with low solubility profile. Some methods comprises of particle size reduction, cyclodextrin complexation, solubilization, co-solvency, solid dispersions, salt formation, polymorphs, solvents or hydrates, pro-drug approach, multiparticulate systems, etc. However each of these methods has some practical limitation 24.

Solid dispersion is one of the most successful and convenient strategic approaches to improve drug release of poorly soluble drugs 11. This technique molecularly disperses the drug into polymeric carrier, and release rate depends on the nature of carrier 13, 25.

Solid dispersions: Solid dispersions have been traditionally used as an effective method to improve the dissolution property and bioavailability of poorly water soluble drugs 26. In 1961, Sekiguchi and Obi first proposed the utilization of solid dispersions to increase the dissolution and oral absorption of such drugs27. Earlier studies also reveal that solid dispersion systems increased the drug dissolution due to improved solubility, wet ability and dispersability using hydrophilic carriers 26. The development of solid dispersion as a practically viable method to enhance bioavailability of poorly water soluble drugs overcame the limitations of several other approaches such as a salt formation, solubilization by co solvents and particle size reduction 28.

The term solid dispersions refer to a group of solid products consisting of at least two different components, generally a hydrophilic matrix and a hydrophobic drug. The matrix can be either crystalline or amorphous. The drug can be dispersed molecularly, in amorphous particles or in crystalline particles based on their molecular arrangement21. Chiou and Riegelman defined the term solid dispersions as, 'a dispersion involving the formation of eutectic mixtures of drugs with water soluble carriers by melting of their physical mixtures' 9, 29. The dissolution of the drug has been enhanced by dispersing a poorly soluble drug in a highly soluble solid hydrophilic matrix17.

Carriers explored for preparation: The choice of carrier has a tremendous impact on the success rate of the solid dispersion strategies. Following criteria should be considered during selection of carriers:

The excipients employed as carriers in solid dispersions and their nature has been summarized in Table 2 30, 31.

Mechanism of dissolution: The enhanced and effective dissolution rate of various drugs from prepared solid dispersions is based on different mechanisms described in the following section. These mechanisms include: (a) wetting of the drug is improved by direct contact of the drug with the hydrophilic polymeric material, (b) the saturated concentration around small particles is higher than around large particles 32, (c) the surface area is increased, and (d) the drug has higher energy in amorphous state than in the crystalline state through which the saturated concentration is increased 33. Therefore, solid dispersion upgrades the bioavailability of poorly soluble drugs by increasing the drug dissolution rate and their saturated solubility in the gastrointestinal fluids 34.

Advantages: The solid dispersions provide the myriad spectrum of desired characteristics for effective delivery of drugs. Various advantages of solid dispersions are mentioned in the subsequent text: 16, 35-37

Considering mutual spatial arrangement of individual components and their state 39, various types of solid dispersions can be distinguished as presented in Fig. 1 36, 40. The type of solid dispersion and its dissolution behaviour are strongly influenced by physicochemical properties of drug and carrier and the used production process 41. 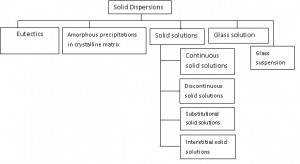 Manufacturing process: The subsequent section is a brief preface of the various techniques widely accepted for formulation of solid dispersions.

stability of solid dispersion 24. For cooling and solidification, various processes such as ice bath agitation 43, 44, solidification on petri dishes at room temperature inside a dessicator 45, 46, spreading on plates placed over dry ice 47, immersion in liquid nitrogen 48 or stored in dessicator 49, 50 were used 51. The most important requirement with this method is that drug and carrier should be stable at the process temperature. Carrier should have a lower melting point (Tm) or high glass transition temperature (Tg) than the drug practically to allow a more practically processing temperature and decreases the potential of drug degradation 41.

The method is advantageous due to its simplicity and economy 29. In addition, a super saturation of a solute or drug in a system can often be obtained by quenching the melt rapidly from a high temperature 52. The major disadvantage of this method is that the texture of solid dispersion after cooling is quite hard. Therefore, size reduction of the solid dispersion may be difficult 41.

The advantage of this method is that thermal decomposition of drugs or carriers can be prevented because of the low temperature required for the evaporation of organic solvents 29.  The major challenge in the preparation of solid dispersion by solvent method is to mix both the drug and the matrix in one solution, which is difficult when they differ significantly in polarity. To minimize the drug particle size in solid dispersion, the drug and matrix have to be dispersed in the solvent as fine as possible, preferably drug and matrix material are in the dissolved state in one solution 40, 62.

Careful analysis of literature on solid dispersions provides prominence to their success in enhancing solubility, dissolution and subsequently bioavailability of several natural moieties. Table 3 highlights the favourable outcomes and reported method of preparations of various solid dispersions of natural constituents. Several research endeavour have been carried out by large number of investigators worldwide in order to enhance the dissolution rate and thereby bioavailability of diverse naturally active constituents.

Therefore, several scientific advancements have been undertaken in the avenue of phytoconstituents based solid dispersion technology which reflects the successful and effective utilization of various natural drugs.

CONCLUSION: The naturally active constituents have tremendous pharmacological significance, however; their effective utilization has been limited due to various constraints such as poor solubility, bioavailability and instability. Large number of investigators across the globe developed numerous techniques to overcome several problems associated with herbal drugs. Solid dispersion technology has been explored by scientific community as an efficient and successful methodology for improving solubility profile and bioavailability of natural drugs. Moreover, it is a promising and convenient method for achieving sustained release characteristics of natural moieties.

The present manuscript is an attempt to provide an insight view on the design and development of solid dispersion of natural constituents. Furthermore, the wide availability of carriers and various preparation techniques along with characterization aspects of solid dispersions are also discussed. Despite remarkable achievements in solid dispersion technologies, this arena still has promising potential for future innovations and advancements in the delivery of various botanicals. Investigational research can also be persuaded to improve the feasibility and proper utilization of new herbal drug delivery systems. Furthermore, these exciting opportunities will also quicken the expansion of research and commercialization of this advanced approach in the fascinating arena of phytoconstituents.