INTRODUCTION: The oral route of drug administration is the most common and preferred route of delivery due to convenience and ease of ingestion. From a patient’s prospect, swallowing a dosage form is a comfortable means of taking medication.

As a result, patient compliance is more effective with orally administered medications as compared with other routes of administration, for example, parenteral route. Although the oral route of administration is preferred, in case of many drugs it can be a problematic and inefficient mode of delivery for a number of reasons.

Limited drug absorption resulting in poor bioavailability is amongst the potential problems that can be overcome while delivering an active agent via the oral route.

After administering a drug orally, it firstly dissolves in gastric media and then permeates the membranes of the GI tract to reach systemic circulation.

Hence, two areas of pharmaceutical research that focus on improving the oral bioavailability of active agents include:

Drug has to enter in to the systemic circulation to exert its therapeutic effect. In recent technologies, innovation of combinatorial chemistry and high throughput screening (HTS) can effectively discover the new drugs which exhibit good pharmacological activities. However, 35-40 % of these new drugs discovered by those technologies suffer from poor aqueous solubility.

Class-I drugs dissolve rapidly in an aqueous environment and are rapidly transported over the absorbing membrane. No strategies are required to increase their absorption. When the release of the active ingredient from the formulation is slower than the gastric emptying rate, good in-vitro-in-vivo-correlation (IVIVC) can be expected.

The absorption (rate) of class-II drugs can be increased by accelerating the dissolution. Class-II drugs show In- vitro – In- vivo Correlation (IVIVC) as long as the in-vivo dissolution rate is same as in-vitro. However, because the dissolution rate is critical for class-II drugs, the in-vivo absorption can be affected by several physiological fluctuations, like the volume and pH of the intestinal juices, the presence of bile salts, food, enzymes, and bacteria, the motility of the gut and the viscosity in the gut lumen.

For class-III drugs the absorption is rate limiting and in-vitro dissolution experiments cannot be used to predict in-vivo absorption.

Also for class-IV drugs no IVIVC can be expected. It is up to the formulation scientist to increase the extent of absorption but also to improve the IVIVC. This will reduce the patient-to-patient variability and improve the bioavailability and the predictability of pharmacokinetic parameters 2.

Especially supersaturated solid solutions of the drug are subjected to recrystallization phenomena. Solid dispersion refers to a group of solid products consisting of at least two different components, generally a hydrophilic matrix and a hydrophobic drug 3.

In general, solid dispersion is defined as the dispersion of one or more active ingredient in a carrier or matrix at solid state.

The term “solid dispersion” refers to the dispersion of one or more active ingredients in an inert carrier in a solid state, frequently prepared by the melting (fusion) method, solvent method or fusion solvent method. The drug can be dispersed molecularly, in amorphous particles (clusters) or in crystalline particles 4, 5.

FIGURE 3: PHASE DIAGRAM FOR A EUTECTIC 8 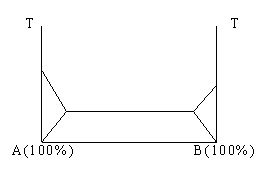 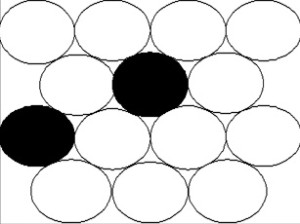 Methods of preparation of Solid Dispersion: Melting and solvent evaporation methods are the two major processes of preparing solid dispersions.

The melting method is the preparation of physical mixture of a drug and a water-soluble carrier and heating it directly until it is melted. The final solid mass is crushed, and sieved. Appropriately this has undergone many modifications in pouring the homogenous melt in the form of a thin layer onto a stainless steel plate and cooled by flowing air or water on the opposite side of the plate. In addition, a super-saturation of a solute or drug in a system can often be obtained by quenching the melt rapidly from a high temperature. Under such conditions, the solute molecule is arrested in the solvent matrix by the instantaneous solidification process. The quenching technique gives a much finer dispersion of crystallites when used for simple eutectic mixtures 11.This process is also known as fusion process. However many substances, either drugs or carriers, may decompose or evaporate during the process due to high temperature. Some of the means to overcome these problems could be heating the physical mixture in a sealed container or melting it under vacuum or in presence of inert gas like nitrogen to prevent oxidative degradation of drug or carrier 12. 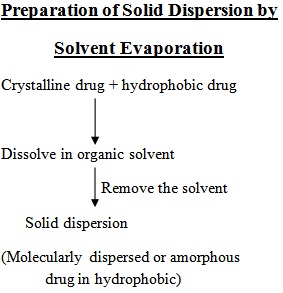 It involves preparation of solid dispersions by dissolving the drug in a suitable liquid solvent and then incorporating the solution directly into the melt of polyethylene glycol, which is then evaporated until a clear, solvent free film is left. The film is further dried to constant weight. The 5 –10% (w/w) of liquid compounds can be incorporated into polyethylene glycol 6000 without significant loss of its solid property. It is possible that the selected solvent or dissolved drug may not be miscible with the melt of the polyethylene glycol. Also the liquid solvent used may affect the polymorphic form of the drug, which precipitates as the solid dispersion. This technique possesses unique advantages of both the fusion and solvent evaporation methods 22.

Solvent: Solvent to be included for the formulation of solid dispersion should have the following criteria:

(i)     Both drug and carrier must be dissolved.

(ii)   Toxic solvents to be avoided due to the risk of residual levels after preparation e.g. chloroform and dichloromethane.

(iii) Ethanol can be used as alternative as it is less toxic.

(iv)Water based systems are preferred.

(v)   Surfactants are used to create carrier drug solutions but as they can reduce glass transition temperature, so care must be taken in to consideration 23.

Class I Solvents (Solvents to be avoided): Solvents included in this class are not to be taken in to use because of their deleterious environmental effects. Some of the examples are given in table 2.

Class II Solvents (Solvents to be limited): Theses solvent should be limited used in pharmaceutical products because of their inherent toxicity (table 3).

Class III Solvents (Solvents with low toxic potential)24:Solvents included in this class may be regarded as less toxic and have the low risk to human health and as some are given in table 4.

TABLE 4: CLASS III SOLVENTS WHICH SHOULD BE LIMITED BY GMP OR OTHER QUALITY BASED REQUIREMENTS 24, 25

Class IV Solvents (Solvents for which no adequate toxicological data was found): Some solvents may also be of interest to manufacturers of excipients, drug substances, or drug products for example Petroleum ether, isopropyl ether.

However, no adequate toxicological data on which to base a PDE was found.

Other advantage like continuous production of solid dispersions is possible so that large-scale production can easily be achieved. The product produced by this method can easily be handled because any shape can be adopted. Like other methods, miscibility of drug and matrix also creates problem. Thermo labile compounds can be degraded due to production of heat generated by the extruder.

Use of supercritical carbon dioxide is advantageous as it is much easier to remove from the polymeric materials when the process is complete, even though a small amount of carbon dioxide remains trapped inside the polymer; it poses no danger to the patient. In addition the ability of carbon dioxide to plasticize and swell polymers can also be exploited and the process can be carried out near room temperature. Moreover, supercritical fluids are used to lower the temperature of melt dispersion process by reducing the melting temperature of dispersed active agent.

The reason for this depression is the solubility of the lighter component (dense gas) in the forming phase (heavier components) 35, 36.

This method also avoids the pulverization and compressibility difficulties 43.

Characterization of Solid Dispersion: Many methods are available that can contribute information regarding the physical nature of solid dispersion system. A combination of two or more methods is required to study its complete picture.

The related technique of deferential scanning calorimetry relies on deference’s in energy required to maintain the sample and reference at an identical temperature. Length or volume changes that occur on subjecting materials to heat treatment are detected in dilatometry; X-ray or neutron diffraction can also be used to measure dimensional changes. Both thermogravimetry and evolved gas analysis are techniques which rely on samples which decompose at elevated temperatures. The former monitors changes in the mass of the specimen on heating, whereas the latter is based on the gases evolved on heating the sample.

Electrical conductivity measurements can be related to changes in the defect density of materials or to study phase transitions 44.

Since many materials can form well as various inorganic, organic and biological molecules. X-ray crystallography has been fundamental in the development of many scientific fields. In its first decades of use, this method determined the size of atoms, the lengths and types of chemical bonds, and the atomic-scale differences among various materials, especially minerals and alloys 45.

Since the frequency ν, wavelength λ and speed of light c, are related by λν = c, the Planck relation can also be expressed as;

Applications of Solid Dispersions: Apart from absorption enhancement, the solid dispersion technique may have numerous pharmaceutical applications, which should be further explored.

It is possible that such a technique be used:

Challenging future for Solid Dispersion Technique: Since solid dispersions were introduced in 1961, an immense amount of research has been done in this area. However, very few solid dispersion systems have been marketed 49. Ritonavir capsules (Norvir, Abbott) has been withdrawn temporarily from the market because of crystallization. Various issues that impeded the commercial development of solid dispersions include

(b)     Difficulty to control physicochemical properties,

(d)     Physical and chemical instability of the drug and/or the formulation.