ABSTRACT: Dabigatran Etexilate Mesylate (DEM), an anticoagulant used to treat and prevent blood clots and to inhibit the occurrence of stroke in people with cardiac arrhythmia. The purpose of this study was to obtain DEM co-crystals by screening eight different conformers and prepare the co-crystals by evaporation technique. Molecular docking was used to identify suitable coformer. Tartaric acid DEM co-crystals have been effectively prepared in the molar ratio of 1:1, 1:2, and 1:3 by solution-based evaporation technique. A 1:1 molar mixture of DEM and tartaric acid was further characterized. Differential scanning calorimetry, Fourier Transform Infrared Spectroscopy (FTIR), Powder X-ray Diffraction (PXRD) and Scanning Electron Microscopy (SEM) were used to characterize manufactured co-crystals. The study confirmed the selection of proper coformer and exhibited enhanced solubility and stability of the DEM co-crystals. Hence, based upon the above results, it revealed that co-crystallization helps in improving the physicochemical properties of the API, altering their chemical structure.

INTRODUCTION: Dabigatran Etexilate Mesylate (DEM) is a salt form of the Dabigatran Etexilate Prodrug Fig. 1. It is absorbed and transformed by esterase catalyzed hydrolysis in the liver after oral administration to dabigatran. It is a potent, reversible, univalent direct thrombin inhibitor 1. It is a BCS Class II drug with absolute bioavailability of 3-7% followed by oral administration. It has a dose of 75 mg, 110 mg, and 150 mg and 12-17 h of elimination half-life 2.

It is prone to the acidic condition and is degraded in the presence of moisture by hydrolytic processes 1, 2. DEM's aqueous solubility depends on pH with elevated solubility in acidic media and very low solubility in neutral and basic media 3, 4. It often creates pain and tightness in the chest, swelling of the face or tongue, respiratory or wheezing problems, and feeling dizzy or faint 5.

Due to these physicochemical and bio-pharmaceutical features, attempts are fabricated to improve solubility, bioavailability, and stability. The low water solubility of the active substance is responsible for the risks of low oral bioavailability. In order to enhance therapeutic efficacy, DEM needs an alternative drug delivery system. Co-crystals have recently drawn significant attention in the delivery of drugs by enhancing the drug physicochemical properties such as melting point, solubility, dissolution rate, stability and bio-availability without changing their chemical structure 6. Co-crystals are compounds with a stoichiometric ratio of drug substance and co-crystal coformers (CCFs) (1:1, 1:2, 1:3 or vice versa) 7. These co-crystals are combined by non-covalent interfaces like hydrogen bonds, Van der Waals forces and π-π packaging which are robust at room temperature 8, 9, 10, 11. The co-crystal former is a ballast molecule. Identifying and selecting the appropriate conformer continues the most important factor in the effective co-crystal growth 7. This technology is explored effectively for the delivery of various drugs such as acyclovir 12, gliclazide 13, piracetam 14, fexofenadine 15, furosemide 16, quercetin 17, baicalein 18, myricetin 19 etc. to improve the therapeutic efficacy.

The objective of the present paper is to enrich the rate of dissolution, the efficacy of DEM absorption using evaporation techniques. A literature study shows that there have been few DEM formulations reported to date. DEM was therefore chosen as the poorly soluble model drug in this work; the solution-based evaporative co-crystallization method developed DEM tartaric acid pH-independent cocrystals. Fourier transform-infrared spectroscopy, Differential scanning calorimetry, scanning electron microscopy, and powder X-ray diffraction defined the co-crystals produced.

Molecular Docking and Selection of Conformers: Molecular docking is an effective approach for computer-aided structure-based drug discovery. This strategy predicts the probability of binding and orienting one molecule (API) is connected to a second molecule (coformer) to form a new complex 20. The strength of the binding affinity between two molecules by means of scoring features can be determined 21, 22. Based on the literature, eight coformers were selected for the preparation of the DEM co-crystals. The research of molecular docking was carried out on the eight coformers chosen. Furthermore, the radar chart was used to visually compare the quality docking score of coformer information with the advantage of showing multidimensional information without the use of statistical methods. Tartaric acid was verified among the eight coformers based on the potential for interaction type, compatibility, and docking score for co-crystal confirmation with DEM.

Solution Based Evaporative Co-crystallization of DEM: DEM co-crystals synthesis was performed using the solvent evaporation technique. Screening of formation of DEM co-crystals was performed by various coformers in an optimal molar ratio (1:1, 1:2 and 1:3). A mixture of 1:1 DEM and tartaric acid was dissolved in water and continually stirred at 40 - 50 ºC for 15 min. The solvent evaporated at 60-65 ºC when stored for 3 h in a hot air oven. Crystals were triturated in mortar and pestle and stored at room temperature 23, 24.

Fourier Transform-Infrared Spectroscopy (FT -IR): FT-IR spectra were registered on a Nicolet iS10 spectrophotometer from 4,000 cm-1 to 500 cm-1 (Thermo Fisher Scientific, Madison, USA). With 40 scans per spectrum at a resolution of 0.4 cm-1, DEM cocrystals were obtained and analyzed using the DTGS KBr detector.

Powder X-Ray Diffraction (PXRD): DEM, DEM co-crystals XRD patterns were achieved using a Shimadzu XRD-6000X system at ambient temperature (Shimadzu, Japan). Samples with Ni-filtered Cu-K (α) radiations were irradiated at a voltage of 40.0 kV and a current of 40.0 mA. The scanning rate ranged from 3 ºC to 50 ºC over a diffraction angle of 2 ºC/min.

Scanning Electron Microscopy (SEM): Morphologically, DEM, DEM co-crystals were evaluated using scanning electron microscopy (Philips XL-30; Eindhoven, Holland). An aluminum stub was connected to a small piece of double-sided adhesive tape and the powders were sprinkled and distributed over the surface of the stub. Under the argon atmosphere, the samples were sputtered with gold-palladium to make them electrically conductive.

In-vitro Dissolution Study: The dissolution studies were performed in a dissolution apparatus Electrolab, Navi Mumbai using the paddle method in 900 ml of pH 1.2 and 6.8 phosphate buffers at 50 rpm maintained at 37 ± 0.5 ºC. The dissolution medium was added an amount equal to 75 mg of co-crystals and the samples were withdrawn at appropriate intervals. The samples were filtered through Whitman filter paper no. 41, diluted, and spectrophotometrically analyzed at 325 nm.

Conformational flexibility; hence it is possible to form co-crystals with certain co-formers 2. Depending on the ability of interaction, hydrogen bond, docking score, and compatibility tartaric acid were selected as coformer for the preparation of DEM co-crystals Fig. 2. The details are summarized in the below Table 1. Fig. 3 represents a visual comparison of docking score in the form of a Radar chart. There are several axes in a radar chart where the information can be plotted. Every axis is one category. The information is displayed on the axis as points. It is possible to join the points belonging to one data series.

A point near the center of an axis shows a reduced value and vice versa 25. Through, the visual comparison from Radar charts and docking scores from molecular modeling, tartaric acid showed the lowest score. Van Der Waals and the electrostatic energy define the interaction between the API and coformer. Higher docking results in the potential for repulsion. In contrast, reduced docking score relates to reduced potential 26.

Solvent evaporation using water as a solvent and tartaric acid as a coformer resulted in adequate DEM co-crystal formation. A preliminary evaluation of cocrystal formation was performed by comparing pure drugs and cocrystals.

Differential Scanning Calorimetry (DSC): An endothermic peak at 180 ºC represented the melting point of pure drug. A significant difference in the melting point (175.1 ºC) of co-crystals was observed compared to the pure drug (180°C) in Fig. 4. This could suggest an interaction between the components, co-crystallization 27.

FIG. 4: DIFFERENTIAL SCANNING CALORIMETRY OF A) DEM AND B) DEM CO-CRYSTALS

Fourier Transform-Infrared Spectroscopy (FT -IR): FTIR showed shifts and change in intensity of peaks in DEM, DEM co-crystals as shown in Fig. 5. Hydrogen bonding was identified in co-crystals by decreasing O-H peak intensity. A decrease in the frequency of N-H stretching indicates that hydrogen is involved in hydrogen bonding. The extent of frequency decrease and relative band broadening can determine the magnitude of bonding with hydrogen. The role of the degree and strength of the hydrogen bonding is to lower the frequency.

The significant modifications in the carbonyl (C = O) and amine (N-H) stretching area showed the formation of new hydrogen bonds 28, 29.

Powder X-Ray Diffraction (PXRD): X-ray diffract to grams of DEM showed an intense peak at 2 to 20º signifying the crystalline nature of the drug. DEM co-crystals showed no intense drug peaks were observed at 2θ of 20 ºC indicating the existence of the amorphous phase Fig. 6. In the case of DEM co-crystals, however, there were no intensive drug peaks at 2θ of 20 ºC showing the presence of the amorphous stage. Decreased intensities and fewer peaks may be due to changes in crystal habit or amorphous form. Reduced crystalline characteristics may result in the enhanced dissolution of DEM compared to pure drug 30. 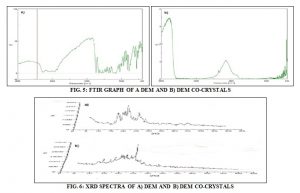 In-vitro Drug Release: As reported in the literature, DEM solubility depends on pH. It is highly soluble in acidic media and poorly soluble in alkaline media. DEM is also susceptible to acid and undergoes degradation.

Hence, DEM co-crystals were developed by improving the physicochemical properties. The dissolution experiment was performed on DEM and DEM co-crystals at pH 1.2 and pH 6.8 to verify the pH-independent solubility and release of drugs. The DEM and DEM co-crystals dissolution profile is depicted in Fig. 8 and 9. The DEM dissolution profile shows that API has a good rate of dissolution in acidic pH (26.49%) as compared to alkaline pH (2.69%) % at 30 min respectively. The complete quantity of DEM dissolved in 45 min was 64.03% in acid pH and 8.71% in alkaline pH. However, DEM co-crystals dissolution rate led to a substantial rise as a function of pH-independent drug release. The quantity of DEM released in the first 30 min was 58.58% and the complete dissolved quantity was 67.5% at pH 1.2. In the first 30 min, the amount of substance dissolved was 59.9% and the drug release in 45 min was 60.54 percent with at pH 6.8 Fig. 8 and Fig. 9.

In addition, higher dissolution of DEM co-crystals can be ascribed to changes in the crystalline pattern, size and shape of co-crystals that escort to increased co-crystal solubility in dissolution media 16, 24, 32.

CONCLUSION: In the present work, prepared DEM co-crystals exhibited excellent physicochemical properties (solubility and dissolution) properties when compared to pure drugs. From the conducted study, we can conclude that co-crystals with tartaric acid prepared by the technique of solvent evaporation of co-crystallization showed an improvement in the solubility and pH-independent drug release, rate of dissolution and stability compared to pure drug.