ABSTRACT: Solid lipid nanoparticles (SLN) are at the forefront of the rapidly developing field of nanotechnology with several potential applications in drug delivery and research. Due to their unique size dependent properties, lipid nanoparticles offer possibility to develop new therapeutics. The ability to incorporate drugs into nanocarriers offers a new prototype in drug delivery that could use for drug targeting. Hence solid lipid nanoparticles hold great promise for reaching the goal of controlled and site specific drug delivery and hence attracted wide attention of researchers. This review presents a broad treatment of solid lipid nanoparticles discussing their aims, production procedures, advantages, limitations and their possible remedies. Appropriate analytical techniques for the characterization of SLN like Photon Correlation Spectroscopy (PCS), Scanning Electron Microscopy (SEM), and Differential Scanning Calorimetry are highlighted. Aspects of SLN route of administration and the in vivo fate of the carriers are also discussed

Nanoparticles made from solid lipids are attracting major attention as novel colloidal drug carrier for intravenous applications as they have been proposed as an alternative particulate carrier system.

SLN are sub-micron colloidal carriers ranging from 50 to 1000 nm, which are composed of physiological lipid dispersed in water or in aqueous surfactant solution. SLN offer unique properties such as small size, large surface area, high drug loading and the interaction of phases at the interface and are attractive for their potential to improve performance of pharmaceuticals 2, 5, 6.

In order to overcome the disadvantages associated with the liquid state of the oil droplets, the liquid lipid was replaced by a solid lipid, which eventually transformed into solid lipid nanoparticles. The reasons for the increasing interest in lipid based system are many – fold and include.

Solid lipid nanoparticles are one of the novel potential colloidal carrier systems as alternative materials to polymers which is identical to oil in water emulsion for parenteral nutrition, but the liquid lipid of the emulsion has been replaced by a solid lipid shown on Fig. 1.

They have many advantages such as good biocompatibility, low toxicity and lipophilic drugs are better delivered by solid lipid nanoparticles and the system is physically stable. 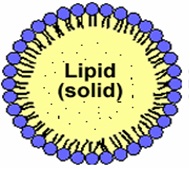 Solid lipid nanoparticles (SLNs) are considered to be the most effective lipid based colloidal carriers, introduced in early nineties. This is the one of the most popular approaches to improve the oral bioavailability of the poorly water soluble drugs. SLNs are in the submicron size range of 50-1000 nm and are composed of physiologically tolerated lipid components which are in solid state at room temperature. 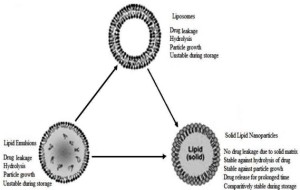 FIG. 2: A DIAGRAMMATIC REPRESENTATION ON SLN OVER EMULSIONS AND LIPOSOMES

Preparation of Solid Lipid Nanoparticles 1-4, 6, 22, 23, 24: SLNs are prepared from lipid, emulsifier and water/solvent by using different methods and are discussed below. 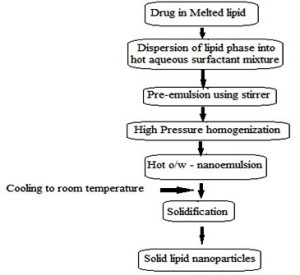 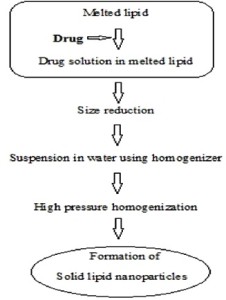 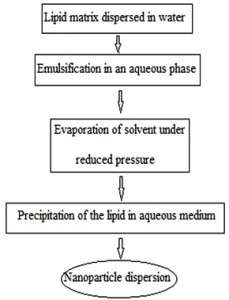 Formulation variables in the Product Quality:

Another advanced microscopic technique used for characterization of nanoparticles is atomic force microscopy (AFM). This is a new tool to image the original unaltered shape and surface properties of the particles. In this technique, the force acting between the surface and probing tip results in a spatial resolution up to 0.01μm. Laser diffraction technique could also be used which is applicable for sub micrometer range particles and calculations are based on the refractive index of the dispersion medium water (1.33) and on the lipid particles 11.

The particle size depends on the matrix constituents as well as on the type and amount of emulsifying agents and lipids. It has been reported that increase in amount of emulsifier decreases the mean diameter of the bulk 12. The size and structure of incorporated drug also affects average diameter of the SLNs 13. Photon correlation spectroscopy (PCS) is also known as dynamic light scattering. This method measures the fluctuation of the intensity of the scattered light which is caused by particle movement and gives a size range from 3 nanometres to 3 microns 14, 15.

The PCS device consists of a light source, a temperature-controlled sample cell, and a photomultiplier for detection of the scattered light.

Zeta potential is measure of the charge on the particles. It helps in designing particles with reduced reticuloendothelial uptake. In order to divert SLNs away from the RES, the surface of the particles should be hydrophilic and free from charge. Structure of the SLNs can be determined by nuclear magnetic resonance (NMR) technique after Mn+2 or Pr+3 ion complication.

Models have been proposed to describe the localization of drug molecules in SLNs 16. The enriched shell model is characterized by drug selectively locating at the interface, either by fast solidification of the matrix lipid or by successful competition of the drug for the interface. Drug dispersed by such a model might exhibit a successful burst effect during drug release. The homogeneous matrix model is characterized by drug dispersed evenly throughout the matrix, much like a solid solution.

The enriched core model is characterized by drug selectivity located at the core of the solid lipid nanoparticles, perhaps due to more rapid solidification of the drug relative to the matrix material. The enriched core model would be useful to produce a membrane controlled release pattern. Although the chemical stability and the release kinetics of drugs are largely related to localization of drugs within the aggregates, more research is still required to validate these models.

Routes of administration and their Biodistribution 2, 3, 7, 23, 26: The in vivo behaviour of the SLN particles will mainly depend on the following points:

Several obstacles frequently encountered with anticancer compounds, such as normal tissue toxicity, poor specificity and stability and a high incidence of drug resistant tumor cells, are at least partially overcome by delivering the musing SLN. The rapid removal of colloidal particles by the macrophages of the RES is a major obstacle to targeting tissues elsewhere in the body, such as bone marrow and solid tumors.

Formulation in SLN confers improved protein stability, avoids proteolysis degradation, as well as sustained release of the incorporated molecules. Important peptides such as cyclosporine A, insulin,calcitonin and somatostatin have been incorporated into solid lipid particles and are currently under investigation. Several local or systemic therapeutic applications may be foreseen, such as immunisation with protein antigens, infectious disease treatment, chronic diseases and cancer therapy 33.

In a study to overcome the limited access of the drug 5-fluoro-2’-deoxyuridine (FUdR) to the brain, 3’,5’-dioctanoyl-5-fluoro-2’deoxyuridine (DO-FUdR) was synthesized and incorporated into solid lipid nanoparticles (DOFUdR-SLN) 22.

The state of the art on surfactant coated poly (alkylcyanoacrylate) nanoparticles specifically designed for brain targeting is given by emphasizing the transfer of this technology to solid lipid matrices. The potential advantages of the use of solid lipid nanoparticles over polymeric nanoparticles are accounted on the bases of a lower cytotoxicity, higher drug loading capacity, and best production scalability.

Moreover, SLN and NLC due to their particulate nature and inherent structure exhibit good potential in the treatment of parasitic infections. Recent reports including our investigation have validated their utility at least to some extent. However, the need of hour is to undertake extensive investigations on SLN and NLC matrices in order to extend their versatility with respect to encapsulation ability and target ability and to arrive at a versatile, effective and economical approach for the delivery of anti-parasitic drugs.

Liquid emulsions and solid nanoparticles are used with ultrasound to deliver genes invitro and in vivo. The small packaging allows nanoparticles to extravagate into tumor tissues. Ultrasonic drug and gene delivery from nanocarriers has tremendous potential because of the wide variety of drugs and genes that could be delivered to targeted tissues by fairly non-invasive means 35.

Studies have shown that nanocarriers including polymeric nanoparticles, liposomes, solid lipid nanoparticles (SLN) and micelles can increase the local drug concentration gradients, facilitate drug transport into the brain via endocytotic pathways and inhibit the ATP-binding cassette (ABC) transporters expressed at the barrier sites. By delivering ARVs withnanocarriers, significant increase in the drug bioavailability to the brain is expected to be achieved. Recent studies show that the specificity and efficiency of ARVs delivery can be further enhanced by usingnanocarriers with specific brain targeting, cell penetrating ligands or ABC transporters inhibitors. Future research should focus on achieving brain delivery of ARVs in a safe, efficient, and yet cost-effective manner 27.

Several nanosized delivery systems have already proved their effectiveness in animal models for the treatment and prophylaxis of malaria. A number of strategies to deliver antimalarials using nanocarriers and the mechanisms that facilitate their targeting to Plasmodium spp-infected cells are discussed in this review. Taking into account the peculiarities of malaria parasites, the focus is placed particularly on lipid-based (e.g., liposomes, solid lipid nanoparticles and nano and microemulsion) and polymer-based nanocarriers (Nanocapsules and nanospheres) 23.

SLN have been used to encapsulate Anti Tubercular Drugs (ATD) and were proved to be successful in experimental tuberculosis. Anti tubercular drugs such as rifampicin, isoniazid, and pyrazinamide SLN systems were able to decrease the dosing frequency and to improve patient compliance. ATD were co-incorporated into SLN to evaluate the potential of these carriers in tuberculosis chemotherapy via the oral route. The finding of this study suggested that SLN have great potential in the delivery of ATD by reducing frequency of doses and improving patient compliance by better management of tuberculosis.

Following the evaporation of water from the lipid nanodispersion applied to the skin surface, lipid particles form an adhesive layer occluding the skin surface. Then hydration of the stratum corneum may increase by which reducing corneocyte packing and widening of the inter-corneocytes gaps can facilitate drug penetration into deeper skin strata. Occlusive effects appear strongly related to particle size. Nanoparticles have turned out 15-fold more occlusive than microparticles, and particles smaller than 400 nm in a dispersion containing at least 35% lipid of high crystallinity has been most potent.

CONCLUSION: Solid lipid nanoparticles do not, as proposed, ‘‘combine the advantages of other colloidal drug carriers and avoid the disadvantages of them’’. The results cannot simply be regarded as nanoemulsions with a solid core.

Clear advantages of SLN include the composition (physiological compounds), the rapid and effective production process including the possibility of large scale production, the avoidance of organic solvents and the possibility to produce carriers with higher encapsulation efficiency.

Disadvantages include low drug-loading capacities, the presence of alternative colloidal structures (micelles, liposomes, mixed micelles, drug nanocrystals), the complexity of the physical state of the lipid (transformation between different modifications) and the possibility of super cooled melts which cause stability problems during storage or administration (gelation, particle size increase, drug expulsion). Sample dilution or water removal might significantly change the equilibria between the different colloidal species and the physical state of the lipid.

The appropriate characterization of the complex surfactant/lipid dispersions requires several analytical methods in addition to the determination of the particle size kinetic aspects to be taken into account. NMR, ESR and synchrotron irradiation will help the drug nanosuspensions coexist in the sample. Unfortunately, these aspects have not always been considered and the terminus ‘drug incorporation’ in the SLN literature is often misleading.

In summary, SLN are very complex systems with clear advantages and disadvantages to other colloidal carriers. Further work needs to be done to understand the structure and dynamics of SLN on molecular level in vitro and in vivo studies.