ABSTRACT: Ziprasidone HCl is a newly introduced atypical antipsychotic drug. It has its own unique multi receptor binding affinity. This makes it a unique special choice of antipsychotic agent.  It mainly acts as antagonist of D2 dopamine receptors as and 5HT2A (serotonin, 5HT, 5-hydroxytryptamine) receptors. It is pinkish brown colored powder having very low solubility in water (21.12 mg/L). The main purpose of this study is to enhance the solubility of Ziprasidone HCl using lyophilisation technique. The β-Cyclodextrine and Hydroxy Propyl- β-Cyclodextrine were used as the water soluble carriers for increasing the solubility of Ziprasidone. All the inclusion complexes prepared by lyophilisation technique showed remarkable increase in the solubility compared to the pure Ziprasidone HCl. The saturation solubility analysis demonstrated highest increase in the solubility of drug after complexation with HP-β-CD by lyophilisation technique. The inclusion complexes were characterized using DSC and XRD technique. During in vitro study result obtained that the lyophilized complexes with HPβ-CD showed 100% drug release within 10 min were as the lyophilized complexes with β– CD showed 100% drug release in 25 min. Therefore the freeze dried complex with HP-β-CD was selected for Catalepsy study on Wistar rats. In the catalepsy study the selected inclusion complex showed increase in bioavailability compared to the drug and  almost all the data obtained from study was found to be 99.99% significant with the control.

This makes it a unique special choice of antipsychotic agent.  It mainly acts as antagonist of D2 dopamine and 5HT2A (serotonin, 5HT, 5-hydroxytryptamine) receptors. It is a pinkish brown coloured powder having very low solubility in water (21.12 mg/L). The oral absorption of Ziprasidone is limited and it reaches maximum concentration within 6-7 hours. Therefore it shows poor oral bioavailability. The oral bioavailability is only 39-60% with a t1/2 of about 6 hours (Approximately). Complexing with cyclodextrin is one of the most promising techniques to enhance the solubility of poor water soluble moiety. They form a water soluble complex with the drug having very low solubility. The complexes were prepared using various techniques physical mixing, kneading, co-precipitation, solvent evaporation, spray drying and freeze drying. In present study β-Cyclodextrine and Hydroxy Propyl- β-Cyclodextrine were used as the water soluble carriers for increasing the solubility of Ziprasidone using lyophilisation technique. All inclusion complexes prepared by lyophilisation technique showed remarkable increase in the solubility compared to the pure Ziprasidone HCl. The saturation solubility analysis demonstrated highest increase in the solubility of drug after complexation with HP-β-CD by lyophilisation technique.

The inclusion complexes were characterized using DSC and XRD technique. The dissolution profiles were calculated and compared with different complexes. The influence of carriers and methods on complexation and physicochemical property of drug–CD complex was investigated to select the most efficient and effective system for improving solubility of Ziprasidone HCl.

Phase Solubility Study: 8 Solubility determinations were performed in triplicate according to the method of Higuchi and Connors. The effect of concentrations of the two Cyclodextrins on the equilibration solubility of Ziprasidone HCl in water at room temperature was carried out by adding an excess amount of drug (25 mg) in to a screw-capped glass vial containing 10 ml of water and various amounts of the carrier (2-10% w/v). The samples were placed on a magnetic stirrer and agitated at room temperature for 48 hrs. An aliquot of each solution was withdrawn and filtered through a Whatman filter paper (no. 41). The assay of Ziprasidone HCl was determined spectrophotometrically at 318 nm (Shimadzu U.V 1800).  A plot of molar concentrations of each of β- CD and HPβ-CD vs. molar concentrations of drug was plotted. The stability constant was calculated according to equation:

Physical Mixture: 9, 10 The required molar (1:1) ratio quantities of drug and β-CD/Hp β-CD were weighed and mixed separately in mortar with vigorous trituration. The mixtures were then passed through sieve no. 40 and were stored in airtight container until further use.

Lyophilisation / Freeze drying: 11 The earlier prepared 1:1 physical mixture of the drug was wetted with 1:1 water: methanol mixture and this was kneaded to form a homogeneous suspension. This was then frozen for 24 hrs at -21 0C and subjected to lyophilisation. The final product was then pulverized and sieved between 50 μm and 200 μm sieves.

Saturation Solubility: 12, 24 Solubility study was performed according to method reported by Higuchi and Connors. Excess quantities of inclusion complexes were added to 25 ml distilled water taken in stoppered conical flasks and mixtures were shaken for 24 hrs. After sufficient shaking to achieve equilibrium, 2 ml aliquots were withdrawn at 1 hr intervals and filtered through Whatman filter paper no. 41. The filtrate so obtained was analyzed spectrophotometrically at 318 nm. Shaking was continued until three consecutive readings were same.

Drug Content Determination: 13 Drug content was determined by dissolving solid dispersion equivalent to 10 mg of the ZPR in small quantity of methanol and kept in ultrasonicator for 10 min. The volume was adjusted to 50ml with 1% SLS in phosphate buffer pH 7.4. The solution was filtered through Whatman filter paper no.41, suitably diluted and the absorbance was measured at 318 nm using double beam U.V. spectrophotometer (Shimadzu U.V 1800).

The resultant spectrum of the drug was compared with reference spectrum of Ziprasidone HCl.

X-Ray Diffraction Analysis: 15 The X- ray diffraction pattern of the sample of inclusion complexes was compared with that of the pure Ziprasidone HCl. This was done by measuring 2ø in the range of 4 ° to 50 ° with reproducibility of ±0.0010 on a diffractometer (Philips). The XRD patterns were recorded automatically using rate meter with time constant of 2 × 102 pulse/second and with the scanning speed of 20 (2ø)/min.

Differential Scanning Calorimetric Analysis (DSC): 16 This study was performed using SII Nanotechnology (SEIKO) instrument. For this study, the samples were placed in an alumina crucible and the thermo grams were recorded at a heating rate of 10 0C/min in the range of 20 0C to 400 0C.

The volume of dissolution medium was adjusted to 900 ml by replacing each 10 ml aliquot withdrawn with 10 ml of fresh dissolution medium. The concentrations of drug in samples were determined by measuring absorbances at 318 nm. Cumulative percent drug released was determined at each time point. Pure drug was used as control.

Catalepsy Study: 18 Groups of 18 male Wistar rats with a body weight between 120 and 250 g were used. They were dosed intraperitoneally with the test drug or the standard. Then, they were placed individually into translucent plastic boxes with a wooden dowel mounted horizontally 10 cm from the floor and 4 cm from one end of the box. The floor of the box was covered with approximately 2 cm of bedding material. White noise was presented during the test. The animals were allowed to adapt to the box for 2 min. Then, each animal was grasped gently around the shoulders and under the forepaws and placed carefully on the dowel. The amount of time spent with at least one forepaw on the bar was determined. When the animal removed its paws, the time was recorded and the rat was repositioned on the bar. Three trials were conducted for each animal at 30, 60, 120 and 360 mins.

TABLE 1: RESULTS OF PHASE SOLUBILITY ANALYSIS OF COMPLEXES OF ZIPRASIDONE HCL WITH β-CD 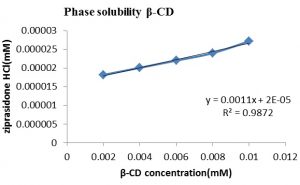 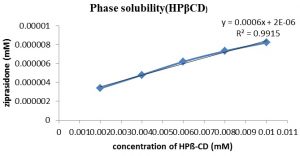 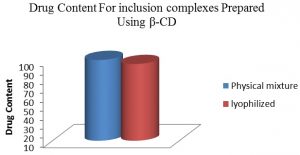 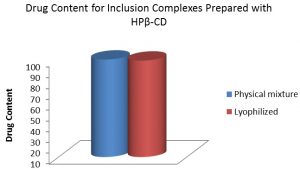 Infra-Red Analysis: The peaks in the range of 3472 cm-1 to 3371 cm-1 in all these systems are smoothened, which would be due to some host-guest interaction between Ziprasidone HCl and cyclodextrins. The spectra of all physical mixtures indicated intact peaks for pure Ziprasidone HCl as well as pure β – Cyclodextrin (Fig. 7 and 8). In all cases however, there was reduction in intensity of Ziprasidone HCl peak which was obscured by cyclodextrin peaks indicating formation of complexes.

Analysis of IR spectra of inclusion complexes prepared by lyophilisation and physical mixtures of components revealed the disappearance of the characteristic peaks of aromatic N– H stretching. This indicates that vibrating and bending of guest molecule was restricted due to formation of inclusion complexes, so very likely aromatic ring of Ziprasidone HCl was inserted into cavity of Cyclodextrins. 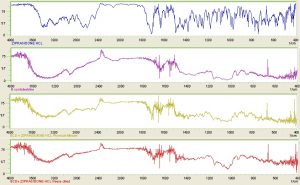 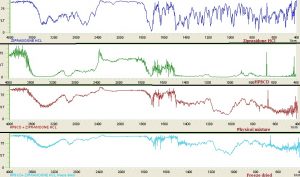 X-Ray Diffraction Analysis of the Inclusion Complexes: The diffractograms of almost all of the solid dispersions of Ziprasidone HCl and cyclodextrin prepared by various methods, showed decrease in diffraction peaks for both Ziprasidone HCl pure and cyclodextrin pure thus indicating conversion from crystalline state to amorphous state (Fig. 9 and 10). These findings suggests that the observed enhancement in dissolution rate of drug was due to the reduction of crystalline nature which was achieved by the formation of complex between pure drug and cyclodextrins. 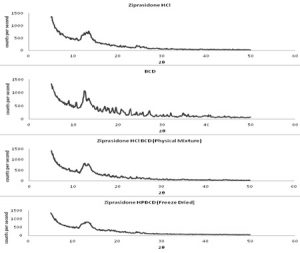 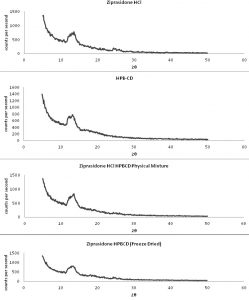 In-vitro Analysis of Inclusion Complexes: Two different polymers i.e. BCD and HP β-CD were used in ratio 1:1 to assess the effect of two different polymers on the drug release profile of Inclusion Complexes. In both the cases, resulted in definite improvement in the rate and the extent of drug dissolution i.e. dissolution rate of dispersions were increased. The probable reasons for this may include a facilitation of dissolution of Ziprasidone HCl, by the dissolved carrier and also a decrease in its particle size in the solid dispersion. The lyophilized complexes with HPβ-CD showed 100% drug release within 10 mins were as the lyophilized complexes with β– CD showed 100% drug release in 25 mins. From in-vitro dissolution study and saturation study it was decided to select Complexes prepared with HPβ-CD by freeze drying for animal study to detect its bioavailability. Percentage drug release for β-CD and HPβ-CD complexes are shown in Table 7, Fig. 19 and Table 8, Fig. 20.. 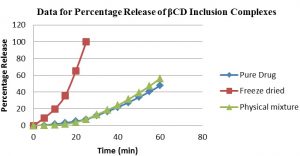 From the obtained results it can be predicted that there was an increase in the bioavailability of the drug when it was complexed with HPβ-CD by freeze drying technique. As there was a marked decrease in cataleptic behavior of the animals in the test group compared to the control and standard. This can be explained from Fig. 21-24 data after 30 mins, 60mins, 120mins, and 360mins of administration of haloperidol. 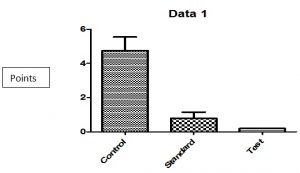 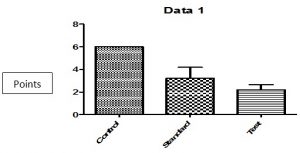 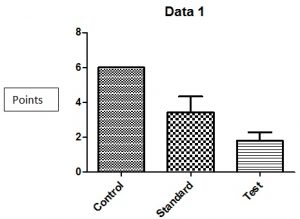 CONCLUSION: From the phase solubility analysis and obtained K values it was reviled that both β-CD and HP- β-CD forms 1:1 inclusion complexes with Ziprasidone HCl. The saturation solubility analysis demonstrated highest increase in the solubility of drug after complexation with HP-β-CD by lyophilisation technique. The drug content was also found to be highest in the inclusion complexes prepared with HP-β-CD by physical mixture and by freeze drying technique.

IR DSC and X-RD data reviled the complexation and conversion of drug from microcrystalline form to amorphous form and the freeze dried complexes with HP-β-CD showed 100% drug release in 10 min in in-vitro dissolution study performed.

Therefore the freeze dried complex with HP-β-CD was selected for Catalepsy study on Wistar rats. In the Catalepsy study the selected inclusion complex showed an increase in the bioavailability compared to the drug and almost all the data obtained from above study was found to be 99.99% significant with the control.

ACKNOWLEDGEMENT: The authors are grateful to the Principal and Management of Marathawada Mitra Mandal’s College of Pharmacy, Thergaon (Kalewadi), Pune, for providing all necessary facilities and infrastructure to carry out this study. The authors also acknowledge Micro labs Mumbai and Gangwal Chemicals Mumbai for providing gift sample of Ziprasidone HCl, β-cyclodextrin (BCD) and HP β-CD.