INTRODUCTION: Most of the new chemical entities (NCE) developed today are sparingly soluble in water and suffer with poor bioavailability. The properties of new chemical entities are shifting towards higher molecular weight and high lipophilicity resulting in poor aqueous solubility. Due to poor aqueous solubility, many drug candidates become unsuccessful to reach the market in spite of exhibiting potential pharmacodynamic activity. Further, poorly water soluble drugs are administered at much higher individual doses than actually desired to achieve necessary plasma levels.

The therapeutic efficacy and bioavailability of any drug depends upon the solubility of drug. Solubility of drug is one of the important parameter to achieve to attain the desired concentration of drug in systemic circulation for the pharmacological response. Therefore, strategies to improve the aqueous solubility and the release rate of drugs are employed and are under constant investigation.

Various formulation strategies have been reported to enhance the solubility of drugs, these includes, particle size reduction 1, pH adjustment 2, co-solvency 3, complexation 4, solid dispersions 5, SEDDS 6 etc., However each technique has its own advantages and limits. Among all these techniques SEDDS appear to be potential method for the solubility enhancement due to its ease of formulation and evaluation.

SEDDS are well known for their potential to enhance the solubility of hydrophobic drugs and consists of isotropic mixtures of an oily vehicle, surfactants, co- surfactants and thickening agents. SEDDS require very less energy to emulsify, and so they undergo spontaneous emulsification in the lumen of gut up on dilution in aqueous phase under the gentle agitation provided by the GI motility. The microemulsions so formed are easily absorbed from the gastrointestinal tract through the villi as chylomicrons. Selection of suitable SEDDS depends on (1) solubility of Candesartan in various excipients (2) area of self-emulsifying region in the phase diagram (3) time required for self-emulsification (4) droplet size distribution of emulsion (5) thermodynamic stability of emulsions 7, 8.

Candesartan is available in various doses (2 mg, 4 mg, 8 mg, 16 mg, and 32 mg). For our study we selected 8 mg as the working dose to limit the total formulation volume. The main objective of the study was to enhance the solubility of Candesartan by formulating an optimal SEDDS formulation and to evaluate various in-vitro characteristics.

Solubility studies 9, 10:The saturation solubility of Candesartan was determined in various oils, surfactants and co‐surfactants by adding excess amount of drug to each screw capped glass vials containing 1 gram of vehicle. The mixture was subjected to cyclomixing using cyclo-mixer to facilitate drug solubilisation. Then, the mixtures were shaken in an orbital shaker for 72 hours at 25o C. After reaching equilibrium, each vial was centrifuged at 2000 rpm for 15 min. The supernatant was collected and filtered using 0.45µ filters. The aliquots of supernatant were diluted with mobile phase and the concentration of drug was quantified by using HPLC method, as reported in the analytical method.

Pseudoternary Phase Diagrams:To investigate the micro-emulsion region, the pseudo-ternary phase diagrams of oil, surfactant/co-surfactant, and water were constructed by a water titration method at Room Temperature. The surfactant (Cremophor RH40) was blended with a co-surfactant (Transcutol HP or Labrasol) in a fixed volume ratio 4:1, 3:1, 2:1 and 1:1 respectively. Aliquots of surfactant/co-surfactant mixture were then mixed with the oil (Labrafac Lipophile WL 1349) at volume ratios of 9:1, 8:2, 7:3, 6:4, 5:5, 4:6, 3:7, 2:8, 1:9 in different vials. The vials were vortexed for sufficient time to attain uniformity. A small amount of water in 5% increment was added into each vial and mixed with vortex. The samples set aside to attain the equilibrium. The equilibrated samples were checked visually, and classified as clear microemulsion, coarse emulsion and gel phases. The percentage of surfactant, cosurfactant, oil and water used herein was decided on the basis of the requirements for the spontaneously emulsifying systems and pseudo ternary phase diagrams were plotted using TriPlot Version 4.1.2 Software.

Preparation of SEDDS Formulations: A series of SEDDS formulations were prepared using Labrasol and Transcutol HP as the Co Surfactants, Cremophor RH 40 as Surfactant and Labrafac Lipophile WL 1349 as the oil. In all the formulations, the level of Candesartan was kept constant (i.e., 8mg). Surfactant/Co Surfactants mixture was prepared by mixing in suitable proportions and vortexed. Accurately weighed amount of Candesartan was dispersed in Labrafac Lipophile WL1349 and surfactant/co surfactant mixture was added to it. The components were mixed by gentle stirring and vortex mixing. The mixture was stored at room temperature for further use.

Emulsification time and Stability studies of Formulations: Self-emulsifying properties of SEDDS formulations were evaluated by visual assessment. The time taken for the formation of micro emulsion was determined by drop wise addition 1gram of the Formulation into 500 ml of distilled water and SGF in a separate glass beakers at 37°C, and the contents were stirred using magnetic stirrer at ~100 rpm.

The tendency to form an emulsion was judged as “good” when droplets spread easily in water and formed a fine emulsion that was clear or transparent in appearance, and it was judged “bad” when the corresponding performance was poor or there was less clear emulsion formation. Depending on visual appearance and time taken for Self emulsification, formulations were graded as:

Effect of Dilution: Selected formulations were subjected to dilution in different  ratios of 1:10, 1:50, 1:100 and 1:1000 fold dilution with distilled water, 0.1 N HCl and phosphate buffer (pH 6.8). The diluted emulsions were stored for 24 h and monitored for any physical changes (such as precipitation or phase separation).

Emulsion Droplet Size Analysis: SEDDS formulations were diluted to 100 times with distilled water in beaker with constant stirring on a magnetic stirrer. The droplet size distributions and Zeta potential of resultant microemulsion were determined after 1 hour by Zetasizer Version 6.01 (Malvern Instruments, UK). Size analysis was performed at 25ºc by placing in an electrophoretic cell with an angle of detection of 90ºC for measurement.

Screening and Compatibility studies of Excipients: IR spectra of pure drug Candesartan (figure 4)) show characteristic absorption at 2941cm-1, 1752 cm-1, 1714 cm-1 and 1614 cm-1. This absorption peak at 2941 cm-1 is due to stretching of C-H bond, the peaks at 1752 cm-1 and 1714 cm-1 are due to two C-O bonds (carbonyl group) and peak at 1614 cm-1 is due to C-N bond. These peaks are present in IR scan of all formulations, so it confirms that, presence of undisturbed drug in the formulations. However, the retention times of the drug solubilized in various excipients was similar to that of pure drug chromatograms. Hence, there are no drug-excipient interactions.

FIGURE 1: SOLUBILITY OF CANDESARTAN IN OILS 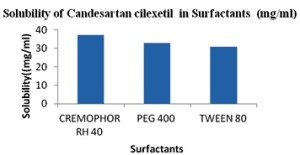 FIGURE 2: SOLUBILITY OF CANDESARTAN IN SURFACTANTS

FIGURE 3: SOLUBILITY OF CANDESARTAN IN CO-SURFACTANTS 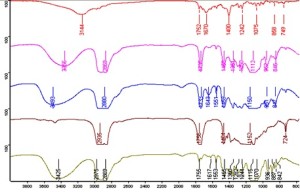 Preparation of Formulations: From the solubility and IR spectroscopy studies, the formulations were formulated for the further studies. The formulations and their compositions are given in table 1.

Pseudoternary Phase Diagrams: Pseudoternary phase diagrams (figure 5, 6) were constructed for each surfactant/co-surfactant combination. The self emulsification region was determined by visual observation for spontaneity of emulsification, clarity, colour and stability. From the phase diagrams (figure 5, 6) it was inferred that increase in oil content increased the particle size proportionally and resulted in coarse emulsions.  oil and surfactant mixture ratios 9:1, 8:2, 7:3, 6:4, 5:5 and 4:6,  formed milky white emulsions. . Microemulsion obtained at Oil: Smix ratio 3:7 and 2:8. For 1:9 composition of oil and surfactant mixture clear emulsion has formed but its flowability was very poor. Microemulsion region was observed in the formulations made of 10-30% oil content. The maximum self-microemulsifying region expanded with increasing amounts of surfactant (Cremophor RH 40) and was maximum at 2:1, 3:1, 4:1. 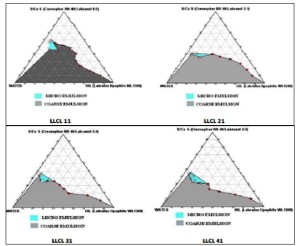 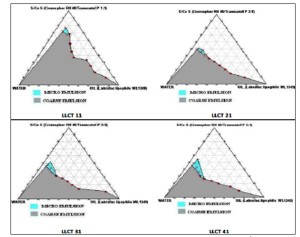 TABLE 2: TABLE SHOWING THE SELECTED SEDDS FORMULATIONS AND THEIR COMPOSITIONS

Droplet Size Analysis: The droplet size distribution (Z-average) of various formulations and their Zeta Potential is given in Table 3. The compositions LLCL21-2, LLCT31-2 and LLCT41-2 were finally selected based on their size, zeta-potential and visual observation as potential SEDDS formulations of Candesartan. 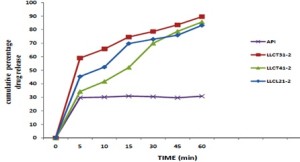