ABSTRACT: Solubility is the important parameter to design a dosage form; it is very difficult to formulate an insoluble drug in to final formulation. In This present study deals with the enhancement of solubility of poorly water soluble drug Meloxicam.: The liquisolid system is a novel technique for solubility enhancement and dissolution improvement of low soluble drugs. Liquisolid technique (powdered solution technology) is used to enhance the solubility parameter and dissolution rate of the drug. liquisolids were prepared by using non volatile solvents or hydrophobic carriers (like PEG 400, Tween 80, span 20) and their effect on dissolution of Meloxicam was studied. By using these solvents individually or in combination and find out the optimized formulation with good solubility.Based on the solubility studies the polyethylene glycol 400 (PEG400) is chosen as co solvent, Microcrystalline cellulose (MCC) used as carrier material and Aerosil used as coating material. In liquisolid system different nonvolatile or hydrophobic solvents are continuously added to the liquid until it convert in to a free flowing solid system Liquisolid system is characterized by flow properties, solubility studies in non volatile solvents (hydrophobic carriers), drug content, and in-vitro release evaluation. liquisolids of meloxicam with (2:1) polyethylene glycol 400,span 20 shows good solubility(F6). F6 is an optimized formulation

INTRODUCTION: According to Bio-Pharmaceutical Classification (BCS) system, Meloxicam is class-2 drug (i.e., Low Solubility-High Permeability); the rate of oral absorption is controlled by the dissolution rate in the gastrointestinal (GI) tract 1, 2. Meloxicam is an oxicam derivative. It is not only potent Non-Steroidal Anti-Inflammatory Drug (NSAID) but also used in acute and chronic musculoskeletal and joint disorders. The liquisolid systems offer various advantages like improvement of bioavailability of an orally administered water insoluble drugs and improvement of dissolution profiles 3, 4. The bioavailability of Bio-Pharmaceutical Classification (BCS) class-II products is controlled by their solvation rate 5.

Poor water soluble compounds show decreased release rate. Low water soluble drugs also show poor rate and extent of drug absorption. Solubility is the most essential formulation parameter for the formulation development. Solubility is becoming rate limiting factor in the development of new drugs. The improvement of oral bioavailability of poor water soluble drugs remains one of the most challenging aspects of drug development. The liquisolid approach has been successfully applied in release enhancement of low dose poorly soluble drugs. The dissolution properties of a drug and its release from a dosage form have a basic impact on its bioavailability 6, 7.

There are several ways, in which the solubility of a drug can be enhanced includes particle size reduction, solid dispersion, pH adjustment, high pressure homogenization, by complexation, by salt formation, by surfactants and liquisolid technique (powdered solution technology) 8, 9. The objective of present study was to increase the solubility of poorly soluble drug by using liquisolid technique. The insoluble liquid drug is converted into free flowing soluble solid by using different non volatile solvents or hydrophobic carriers like PEG 400, Tween 80, span 20.By using these solvents individually or in combination and find out the optimised formulation with good solubility.MCC is used as a adsorbent, Aerosil is used as coating agent.

Solubility studies of Meloxicam were performed by selecting different nonvolatile or hydrophobic solvents like PEG 400, Tween 80, and Span 20. 10 ml of each non volatile solvent was taken in 25 ml conical flasks. To each of these flasks excess amount of Meloxicam was added. The flasks were Stoppard and shaken thoroughly by using vortex mixer for 30 minutes. Then the samples were placed in water bath shaker and continued shaking for 24 hours. The temperature of the bath was maintained at 37°C. After 24 h the contents was subjected to centrifugation.

The supernatant was collected and filtered by using 0.45 µ filters. Thus, saturated solutions of Meloxicam were prepared by adding excess drug to the vehicles and shaking on the shaker.The samples were diluted and analyzed using UV-Visible spectrophotometer (Elico SL-191) for Meloxicam content at 354 nm. All solubility measurements were performed in triplicate. The data is given in Table 1.

FTIR spectroscopy:  Fourier-transform infrared (FTIR) spectra were obtained using an FTIR spectrometer (Shimadzu 8400S, Japan). The samples (Meloxicam and excipients) were previously ground and mixed thoroughly with potassium bromide, an infrared transparent matrix, at 1:5 (Sample: KBr) ratio, respectively. The KBr discs were prepared by compressing the powders at a pressure of 5 tons for 5 min in a hydraulic press. A number of scans were obtained at a resolution of 4 cm-1, from 4000 to 400 cm-1. FTIR spectra of pure drug (Meloxicam) and optimized formulation (Meloxicam) are given in Figure 1 and 2 respectively.

The liquisolid systems were prepared as per the formula given in Table 2. Initially the 100 mg Meloxicam was transferred in to a mortar. Then 5 ml of PEG 400 was added slowly and dissolved the drug by triturating to give the concentration 20 mg/ml. This solution was adsorbed on MCC in mortar by trituration. The addition was continued until the liquid convert in to a free flowing solid system. All the formulae were prepared by using the above described method.

TABLE 2: FORMULAE FOR THE PREPARATION OF VARIOUS MELOXICAM LIQUIDSOLID SYSTEMS.

The volume was measured, tapped density is calculated. Three determinations were done for each formula.

It is defined as the maximum angle possible between the surface of a pile of powder and the horizontal plane; it was measured by pouring the weighed powder mixture into the funnel which was fixed to stand at a definite height (h). The drug excipient blend was allow to flow through the Funnel freely on to the surface and placed on a graph sheet. Then the height and diameter of the heap formed were noted down, angle of repose was calculated. Three determinations were performed. It is calculated using this formula,

Drug content of all the prepared liquisolid systems (LS) was estimated by the following procedure. Accurately weighed 100 mg of the liquisolid systems (LS) powder was taken and transferred into a 100 ml volumetric flask. 50 ml of methanol was added and vigorously shaken for 15 minutes. The solution was then sonicated for 15 minutes. After this the solution was kept aside for 15 min for equilibration and made up to volume with phosphate buffer pH 6.8. The resulted solution was filtered through 0.45 μm filter paper and suitably diluted and the drug content was estimated by UV-Visible spectrophotometer.

In- vitro dissolution studies were carried out in 900 ml of pH 6.8 phosphate buffer using USP XXIV type-II (Paddle) dissolution rate test apparatus (Model L6, M/S Electro lab). Sample equivalent to 20 mg of Meloxicam, a speed of 50 rpm and a temperature of 37±1°C were used in each test. A 5 ml aliquot was withdrawn at different time intervals, filtered and replaced with 5 ml of fresh dissolution medium. The filtered samples were suitably diluted whenever necessary. All the dissolution experiments were conducted in triplicate and the mean values are reported. The dissolution studies were carried for the pure Meloxicam and for all the prepared Liquisolid systems.

FTIR spectra of pure drug, optimized formulation f6 were carried out. The peaks obtained in the spectra of each formulation correlates with the characteristic peaks (n-h, c-h, s=o, and c=o) of drug spectrum. It did not show any well-defined interaction between meloxicam and excipients.   Thus,   it   can   be   said   that   drug   is compatible with the formulation components.

The solubility studies of Meloxicam in various non volatile solvents are very important for choice suitable solvent system. Hence the solubility studies were conducted using various nonvolatile solvents. The results shown in Table 1 High solubility was observed in 1:1 ratio of Span 20 and PEG 400 (11.66 mg/g) and 1:1 ratio of Tween and PEG 400 (9.73 mg/g). Hence in the preparation of meloxicam liquisolid systems (LS) these solvents alone and in combination were used. The properties such as bulk density, tapped density, Hausners Ratio, % compressibility index and angle of repose were observed. 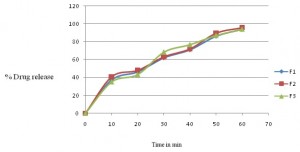 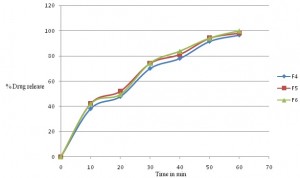 The percent drug content (%) of the meloxicam in liquisolid systems were found to be in the range of93.66 to 99.56.  The high drug content values indicated the suitability of the technique. The release profile of drug from these liquisolid systems (LS) was carried out and values are given in Table 6, graphs 1, 2 were drawn. Among the six formulations Formulation F6 shows good results so it is an optimized formulation.

CONCLUSION: The potential of liquisolid systems to improve the dissolution properties of Meloxicam was investigated in the present study. The results clearly indicated that the liquisolid systems are converting the liquid form drug in to solid form when adsorbed on to solid carrier, converted in to free flowing powders. High drug content and drug release characters indicated the usefulness liquisolid technique for improvement solubility and dissolution of poorly soluble Meloxicam. Hence this technique can be used as a potential tool for design of suitable dosage forms for poorly soluble drugs.