ABSTRACT: Proniosomes based drug delivery systems have potential as a significant drug carrier in a variety of therapeutic applications. The objective of the present study was to investigate in vitro sonophoretic transdermal delivery of Losartan Potassium (LP) across albino rat skin using proniosomal gel and its comparison with aquasonic gel. Proniosomes of LP were fabricated with L-a-lecithin (egg yolk), cholesterol and a non-ionic surfactant and confirmed using optical microscopy. Permeation experiments were performed using modified Franz Diffusion Cell along with ultrasound treatment (Frequency-1MHz; Intensity- 2.5 W/cm2; Duration of application- 30 min; Mode of application - Continuous and Pulsed). An in vitro skin permeation of LP with aquasonic gel was found superior than proniosomal gel using sonophoretic delivery. Using proniosomal gel, when ultrasound was applied in pulsed mode, LP transdermal flux and enhancement factor were 60.88 ± 6.2 μg/cm2/h and 5.31, respectively, 115.41 ± 5.01 μg/cm2/h and 10.07 those achieved using aquasonic ultrasound gel, respectively. Similar results were observed (better flux with aquasonic gel than proniosomal gel) using continuous mode of ultrasound application. These findings suggested that aquasonic gel could act better means of delivery for LP instead of proniosomal gel, when used in combination with ultrasound treatment.

An orally active angiotensin II receptor antagonist indicated for hypertension is LP (Biopharmaceutics classification system class 3 drugs). The normal daily dose of LP is 50 mg and 100 mg dose is given in severe cases. The drug possesses extensive hepatic first pass metabolism (67%) and short biological half-life (2 h) 4-5. Therefore, in order to bypass hepatic first pass metabolism, and reduce its dose, a transdermal formulation can be explored. All these properties, such as extensive hepatic first pass metabolism (67%), short biological half-life (2 h), low dose (25-50 mg), low oral bioavailability (33%), and low molecular weight (461.01 Da), make it good candidate for transdermal drug delivery system 6-9. However, TDD is limited by low skin permeability due to the barrier properties of the stratum corneum (SC), the outermost layer of the skin.

Very low permeability of SC to foreign molecules is the main hindrance of TDD. A number of technologies have been proposed to overcome the natural barrier function of the skin, such as use of chemical enhancers 10, iontophoresis 11 and sonophoresis 12-13. Sonophoresis refers to a technique that temporarily enhances skin permeability such that various molecules can be delivered non-invasively. For the past several decades, various sonophoretic transdermal studies have been carried out focusing on delivery mechanism, parameter optimisation, transport pathway or delivery of several categories of drugs including and high molecular weight and hydrophilic compounds 14. Sonophoresis can be combined with other TDD techniques to enhance drug delivery routes 15.  However, a TDD system and proniosomes is yet to be studied.

The rationale for using vesicles in dermal and transdermal drug delivery is many folds. Vesicles might a) act as drug carriers to deliver drugs into skin; b) act as penetration enhancers due to the penetration of the individual lipid components into the stratum corneum and subsequently the alteration of the intercellular lipid lamellae within the skin c) act as a depot for sustained release of dermally active moieties; d) serve as a rate-limiting membrane barrier for the modification of systemic absorption, hence, resulting a controlled transdermal delivery system 16-17.

Today, lipid and non-ionic surfactant based drug delivery systems have drawn much attention from researchers as potential carriers of various bioactive molecules that could be used for therapeutic applications 18.

One such delivery system consists of proniosomes, prepared from non-ionic surfactants (spans and tweens) by dissolving these surfactants in a minimal amount of an acceptable solvent (ethanol, methanol, isopropyl alcohol) and least amount of water, proniosomes can be easily fabricated 19. Previously, we had investigated in vitro studies of LP to observe the effect of different ultrasound variables on the release of drug from the aquasonic gel, across the skin into the receptor solution 20. The aim of present work is to study the effect ultrasonic waves over LP proniosomal vesicular system.

Combined approach proniosomes and ultrasound mediated delivery is used for transdermal delivery of LP. Safety may also be anticipated to improve, if the synergistic effect on transdermal permeability occurs. Further, this combination may allow a less severe ultrasound protocol/concentration. In addition, effect of ultrasound application on permeation of LP from proniosomal gel was compared in the present work with drug loaded in aquasonic jelly using male albino rat skin. There are many reports on the combined use of sonophoresis with other physical and chemical enhancers 21, however, till date no study have been published concerning the sonophoretic delivery of drugs formulated in proniosomes.

Ultrasound Equipment: Sonophoretic treatment was given using ultrasound generator (Supreme Surgical Ltd.) operating at a frequency of 1 MHz and intensity 2.5 W/cm2. Probe diameter was 1 cm. Ultrasound treatments were carried out either in a continuous mode or pulsed mode (1:1) for 30 min duration.

Formulation of LP proniosomes: LP proniosomes formulated in present study were reported in literature by Thakur et al.6. Briefly, proniosomes were prepared by mixing the drug with weighed quantities of non-ionic surfactant (Span-60), L-α- lecithin from egg yolk and cholesterol in a wide mouth glass tube (Table 1). Then, 0.5 ml of absolute ethanol was added. The mouth of glass tube was covered with a lid and was warmed in a water bath at 65±3°C for 5 min. Subsequently, 0.28 ml of phosphate buffer (PB) pH 7.4 was added and the mixture was further warmed in a water bath for 2 min. and finally allowed to cool down at room temperature till the dispersion was converted to proniosomal gel (PNG). Control formulations were prepared using same quantities of all ingredients without drug.

Proniosomes formulated were confirmed by optical microscopy at different magnifications (Fig.1-3). A small quantity of PNG was taken and suspended in 10 ml of PB (pH 7.4). The dispersion of proniosomes was manually shaken for few seconds so that lumps of proniosomes are distinguished into individual proniosomes. A drop of the dispersion was placed onto the slide and examined under microscope. At 10, 20 and 50 X magnification, small size circular vesicle bodies were observed. 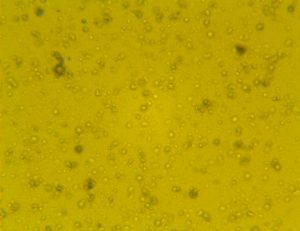 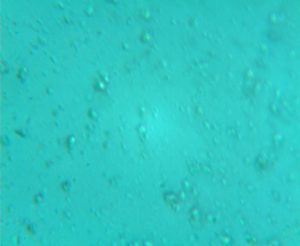 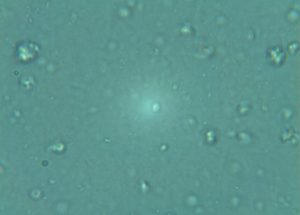 In vitro Permeation Studies using Ultrasound Gel: Permeation experiments were performed with modified Franz diffusion cells which allowed the introduction of an ultrasound probe into the donor compartment. The treatment procedure involves the application of an unmedicated coupling agent (usually gel) which transmit the ultrasound energy from the ultrasound transducer to treatment site (the donor compartment was filled with LP dispersed in ultrasound coupling gel). Ultrasound treatments were given as discussed earlier (section) and in vitro experimental conditions in Table 2.

A stationary technique was used because it was not possible to move the transducer in a reproducible fashion on diffusion cell without causing damage to the membrane. The receiver medium was phosphate buffer (pH 7.4). The top of donor was covered with aluminium foil after ultrasound exposure. The available diffusion area between cells was 6.21 cm2. The receptor was kept at a constant temperature of 37°C and stirred by a magnetic stirrer at 500 rpm.

Each diffusion experiment was carried over 8 hrs and repeated with three skin samples obtained from three different bodies. At appropriate intervals, 5 ml aliquots of the receptor medium were withdrawn and immediately replaced by an equal volume of fresh receptor solution. Samples were analyzed spectrophotometrically using (UV-1601PC, Shimadzu, Japan), UV-Visible spectrophotometer at 254 nm. Similarly, in vitro permeation studies were performed using LP proniosomal gel in both continuous and pulsed mode of ultrasound application.

Permeation Data Analysis: Cumulative amount of drug permeated through the skin (µg/cm2) was plotted as a function of time for each treatment group. The diffusion rate or flux (Jss) was determined from the linear portion of slope of cumulative amount –time profile graphs and expressed as the amount of drug transported through a unit of area of skin membrane per hour 22. Enhancement factor was calculated by dividing Jss of each variable by Jss of the control i.e. passive delivery. Data are expressed as the mean ± S.D. of three experiments.

RESULTS AND DISCUSSION: As the aim of our study here, was to study the effect of ultrasonic waves over proniosomal vesicular systems. LP proniosomes were formulated by method reported by Thakur et al. 6. Optical microscopy photographs confirmed the successful fabrication of LP proniosomes. Ultrasound treatment was given (Frequency-1MHz; Intensity- 2.5 W/cm2; Duration of application- 30 min; Mode of application - Continuous and Pulsed) to LP proniosomes and drug dispersed in aquasonic gel and evaluated for transdermal permeation parameters.

Proniosomes should be hydrated to form niosomal vesicles before the drug is released and permeated across the skin. As observed in the in vitro permeation experiments using proniosomes, the cumulative amount of LP was detected in the first sampling time (1h). This indicated that all the procedures of LP permeation including water penetration from the receptor compartment to skin, conversion of proniosomes to niosomal vesicles, LP release from niosomes, and permeation of drug across skin occur rapidly. Several mechanisms can be used to explain the ability of niosomes to modulate drug transfer across skin 23, including: 1) the effect of vesicles as penetration enhancers to reduce the barrier properties of stratum corneum; and 2) the lipid bilayers of niosomes as rate-limiting membrane barrier for drugs.

One of the possible reasons for niosomes to enhance the permeability of drugs is structure modification of stratum corneum. It has been reported that the intercellular lipid barrier in stratum corneum would be dramatically changed to looser and more permeable by treatment with niosomes. Non- ionic surfactants in proniosomes can act as penetration enhancers that are useful in increasing the permeation of many drugs 23. 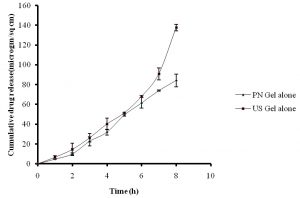 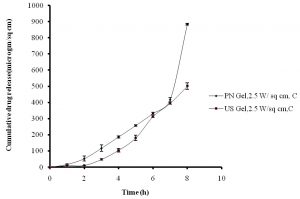 Flux values were found decreased for LP proniosomal gels with US treatment when compared to LP in ultrasound gel both in continuous as well as pulsed mode as shown in Fig. 5-6 and Table 3.

TABLE 3: FLUX VALUES FOR PRONIOSOMAL GEL AND US GEL WITH AND WITHOUT SONOPHORETIC TREATMENT 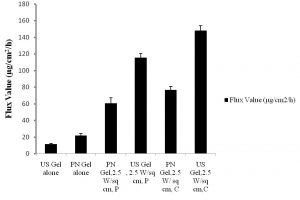 FIG. 6: COMPARISONS OF FLUX VALUES FOR PRONIOSOMAL GEL AND US GEL WITH AND WITHOUT SONOPHORETIC TREATMENT

However, when permeation flux is compared to LP proniosomal gel without US treatment to PNG with US treatment (in both modes), latter showed higher flux values. Hence, it was found that application of US in both modes increases the permeation rate of drug from proniosomes but this increase was more significant from drug loaded in US jelly. It was deducted that combination of proniosomes with sonophoresis were found to increase drug permeation as hypothesized earlier.

This may be due to skin repair caused by proniosomal gel application. It is hypothesized that the skin perturbation caused by sonication was repaired by permeation of proniosomal gel vesicles into sonicated skin. Many reports on decreased transdermal delivery were found in literature for combinations of electroporation 24 and iontophoresis 25. Earlier, Vyas et al., liposomally encapsulated diclofenac for sonophoresis induced systemic delivery and ultrasonic application produced a large increase in drug release26. Therefore, it was hypothesized that ultrasound assisted delivery was enhanced by proniosomal encapsulation of LP due to their synergistic combination. Therapeutic US cause cavitation in skin and consequently enhance drug permeation. In addition, due to absorption of US waves in coupling media a thermal effect is caused which may be responsible for permeability changes in skin 20.

CONCLUSION: Optical microscopy results confirmed successful formulation of LP proniosomes. Permeation parameters were determined using albino rat skin in modified Franz diffusion cell after sonophoretic treatment to both drug loaded proniosomes and aquasonic gel. Sonophoresis increased the permeation rate of LP in both gels over their passive counterparts (P<0.01), as well as synergistic effect was detected when used in conjunction with LP proniosomal gel. Higher steady-state flux and enhancement factor were obtained from aquasonic ultrasound gel and skin repair caused by proniosomal gel applicationis suggested to be the cause. Comparative studies (with US treatment) confirmed this finding. Hence, it is suggested LP from there preliminary studies loaded in ultrasound aqueous gel act as better delivery vehicle in sonophoretic mediated transdermal delivery and sonophoresis can be synergistically combined with proniosomal gel for better delivery.