Casuarina equisetifolia (Casuarinaceae) is considered a medicinal plant and is traditionally used for the treatment of diarrhoea. Preliminary phytochemical screening of methanolic extract of the aerial bark revealed the presence of carbohydrates, alkaloids, proteins, glycosides, saponins, flavonoids and tannins. The extract reduced contractions in isolated ileum induced by spasmogens like ACh, Histamine, KCl and BaCl2 and potentiated the effect of Nifedipine suggesting an antimuscarinic, antihistaminic and a calcium channel blocking action. Flavonoids and tannins present in the extract might be responsible for the observed antispasmodic effect and suggests multiple mechanisms, which can be exploited in future studies.

INTRODUCTION:Plant based traditional medicine system plays an essential role in health care, with about 80% of the world’s inhabitants relying mainly on traditional medicines for their primary health care 1. For centuries, herbs have been used in traditional medicine to treat  many gastrointestinal disorders. In recent times numerous scientific studies have been performed to test the potential effect of plant extracts on intestinal contractions. However, the mechanism of action by which these plants exert their therapeutic effects has not been completely elucidated 2.

Casuarina equisetifolia  is an evergreen tree; generally attains height up to 50 m, introduced into India. It is cultivated on Coastal regions from Gujarat to Orissa, some parts of West Bengal and in Andamans 3. Various parts of the plant such as bark,leaves,seeds and fruits have been reported to posess antihistaminic 3, antioxidant 4, antimicrobial 5, hepatoprotective 6 and analgesic 7 activities.

The aim of the present study was to evaluate the possible spasmolytic activity of the methanol extract of Casuaria equisetifolia bark since there is no data of the physiological effects of the extract on isolated intestine.

Animals: Wistar albino rats (150-200 g) of either sex were housed in polypropylene cages, maintained under standard laboratory conditions and provided with standard diet and water ad libitum.They were acclimatized for one week to the laboratory environment before initiating the study. Handling of animals and experimentation were carried out according to the guidelines laid by Committee for the Protection and Control of Scientific Experimentation on Animals and with prior approval from the Institutional Animal Ethical Committee. Animals were fasted for 18hrs prior to experimentation during which food but not water was withheld.

Plant material: Bark of Casuarina equisetifolia was collected in the month of March from our campus and authenticated in the Department of Botany. A voucher specimen (R11-01) was deposited for the same for future reference. The bark was cleaned, dried and powdered. The powdered material (1.5kg) was macerated with methanol (x4) for one week and the solvent was evaporated under vacuum to obtain the crude methanolic extract of Casuarina equisetifolia (CEE).

Phytochemical Screening: Preliminary phytochemical screening of CEE was carried according to the standard procedures 8.

Isolated Rat ileum preparation 9:  Fasted (24hrs) rat was sacrificed and ileum was mounted in an organ bath containing Tyrode solution . Tyrode solution was continuously aerated and maintained at 37±0.5oC. One end of the ileum was attached to an S-shaped aerator tube and the other to an isotonic frontal writing lever attached to a smoked drum. The tissue was allowed to equilibrate for 30 min under a load of 500 mg. Contact time of 90 s with three washings at an interval of 30 s each (5 min time cycle) were followed for recording the responses of ACh at the doses of 2, 4, 8, 16, 32 and 64 μg/ml. After obtaining the dose response curve of ACh, CEE(50,100 and 150 μg/ml) was added to the bath and same doses of ACh were repeated in presence of CEE.

Graph of percentage of maximum contractile response on ordinate and concentration of ACh on abscissa was plotted, in the absence and presence of extract. Antimuscarinic effect of CEE was compared with that of atropine (1µg/ml). The effect of CEE on KCl induced contractions was also evaluated by recording the contractions induced by single dose of KCl (60 mM) until plateau was achieved and then applying cumulative doses of CEE until the KCl induced contractions were completely abolished.

Effect on BaCl2 (4mM) induced contractions were similarly studied. Effect of nifedipine (1μg/ml), a calcium channel blocker, on the CRC of ACh in the presence of different doses of CEE was studied to investigate the involvement of calcium channels.

Isolated guinea pig ileum preparation 10: Guinea pig ileum was used for screening of antihistaminic activity. The stimulation of H1 receptors produces graded dose related contraction of isolated guinea pig ileum. Ileum was isolated as described above and responses of Histamine were recorded at the doses of 1, 2, 4, 8, 16 and 32 μg/ml. After obtaining a dose response curve of Histamine, CEE(50, 100 and 150 μg/ml) was added to the bath and same doses of Histamine were repeated in presence of CEE and Chlorpheniramine(10 μg/ml). Graph of percentage of maximum contractile response on ordinate and concentration of Histamine on abscissa was plotted, in the absence and presence of extract and standard drug.

All experiments were conducted along with controls using the same tissue and adding an equal volume of vehicle in place of CEE. CEE was prepared in Tyrode solution while the stock solutions of all drugs were made in distilled water and then serially diluted with Tyrode. The final dilutions of the drugs were made fresh on the day of the experiment. The calculated concentrations of CEE and standard drugs were final organ bath concentration. An error of ±5% of bath volume was accepted while adding the drug solutions to the organ bath. Responses were recorded on a smoked kymograph paper fixed on a Sherrington rotating drum using a frontal lever with a 5-10 fold magnification. The kymogram was fixed with a fixing solution containing shellac in alcohol.

Statistical Analysis: Ileal contractions induced by spasmogens alone (control) were measured as maximum contractions from the baseline and assumed as 100%. %Reductions induced by CEE and antagonists were calculated with reference to the control. The mean at each point was compared with the corresponding control. Data is expressed as Mean±SEM of six experiments, analyzed using ANOVA and Dunnett’s post test.

FIG 1: EFFECT OF VARIOUS DOSES OF CEE ON CONTRACTIONS INDUCED BY INCREASING DOSES OF ACH ON ISOLATED RAT ILEUM PREPARATION 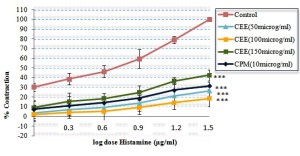 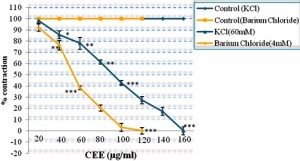 FIG. 3: EFFECT OF INCREASING DOSES OF CEE CONTRACTIONS INDUCED BY KCL AND BACl2 ON RAT ILEUM 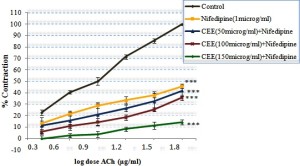 FIG. 4: EFFECT OF VARIOUS DOSES OF CEE ON  CONTRACTIONS INDUCED BY INCREASING DOSES OF ACH IN THE PRESENCE OF NIFEDIPINE ON RAT ILEUM

DISCUSSION: Diarrhoea results from an imbalance between the absorptive and secretory mechanisms in the intestinal tract, accompanied by intestinal hurry, which results in an excess loss of fluids through feces 11. Inhibitory effect of CEE on various spasmogens was dose dependent and completely reversible indicating that the effects are membrane mediated. It also pointed to the fact that the extract was physiologically active.

ACh induced contractions in the rat ileum involve two different mechanisms coupled to muscarinic receptors. One mechanism activates non-selective cation channels in the plasma membrane, which results in membrane depolarization. The depolarization stimulates Ca2+ influx through voltage-gated Ca2+ channels. The other mechanism activates contraction by the release of intracellular Calcium. It was found that CEE inhibited the contractions induced by ACh and the Emax was suppressed.Depolarization induced by high K+ concentration activates the VDCCs and increases the intracellular calcium 9.

L-type Ca2+ channels have been identified to be present in rat intestine. High K+ stimulation provokes membrane depolarization and is the most common method for the introduction of Ca2+ into cell without receptor stimulation. A substance causing inhibition of high K+ induced contractions is considered as a blocker of Ca2+ influx 12.

Ba2+ depolarizes the smooth muscle membrane and opens the voltage-dependent Ca2+   channels resulting in a Ca2+  influx 2. CEE produced a statistically significantly inhibition of the contractions induced by BaCl2. The inhibitory effect could not be related to reduction of smooth muscle myofilament’s sensitivity to Ca2+, otherwise the effects would not have been reversible after washing.

Verapamil and Nifedipine, two blockers of L-type Ca2+ channels, reduced the inhibitory effect of Boswelia serrata extract on ACh induced contractions suggesting the involvement of such channels in the mode of Boswelia serrata extract 13. On similar lines, CEE potentiated the effect of Nifedipine which confirmed the involvement of VDCC in the relaxation produced. Histamine is known to cause contraction of smooth muscle of the GIT by membrane depolarization and increased excitability 2. Hence, the action of CEE on Histamine receptors was also investigated.

CEE appears to act on all parts of the GIT. CEE might have exerted its antidiarrhoeal effect by antagonism on the ACh and Histamine receptors, which is a receptor mediated mechanism. It may have caused blockade of muscarinic or/and histaminic receptors or Ca2+ channels directly. The spasmolytic effect exerted by CEE may be due to a decrease in the [Ca2+]i  and interference with muscle contraction. It may also act by a direct smooth muscle relaxation, like Papaverine.

Spasmolytic effects of the extract of Casuarina equisetifolia could be exploited for other therapeutic uses of this plant. In particular, the Ca2+ channel blocking activity could be exploited for uterine and bronchial relaxant effects or as antihypertensive and antianginal. However, the exact mechanism of action, isolation and purification of specific antidiarrhoeal phytoconstituent(s) and potential toxicities needs to be elaborated in future studies.