ABSTRACT: Synthesis of new organometallic Schiff bases complexes with general formula [ML)xH2O] [where M = Mn(II), Ni(II), Cu(II) Pd(II) and Pt(II), L=2,2'-{(1R,1'S)-1,1'Ferrocen-2,4-dien-1-yl-2,2'-diyl bis [(Z)methyl-ylidenenitrilo]}bis(3-iodophenol)] have been prepared and characterized by elemental analysis, magnetic susceptibility, Conductivity IR, UV-Visible, Mass spectra and TGA/DTA. Organometallic Schiff base is tetradentate and co-ordination through nitrogen of azomethine (>C=N-) and oxygen of Hydroxyl group. The complexes have octahedral geometry with six coordination number. Electronic spectra of the complexes were recorded and its parameters like Nephelauxetic effect (β), bonding parameter (b1/2) and Sinha’s parameter (δ %) are calculated. TGA and DTA results of [Pt (C24H16 FeI2N2O2).2H2O] and [Pd (C24H16 FeI2N2O2).2H2O] are reported, Complexes were losing weight due to exothermic and endothermic process. The mass spectra of prepared ligand (C24H18 FeI2 N2O2) and its complex such as [Mn (C24H16FeI2N2O2).2H2O] were used to compare their stoichiometric composition and it found that near about equal to the theoretical mass of the complex and prepared ligand. Synthesis of nanoparticles of OMNPs (organometallic Nanoparticles) of Cu(II) Complex with SEM and EDX were recorded and particle size is in between 52-60nm. The ligand and complexes have been screened for its anti-fungal activities against three fungi Alternaria brassicae, Aspergillus niger, Fusarium oxysporum.

MATERIALS AND METHODS: All reagents and chemicals were used an analytical grade and used without any further purification. Ferrocene aldehyde compound obtained from Aldrich. The All solvents were purified and distilled by distillation before they are used. Elemental analysis was carried at IIT Mumbai. The conductivity measurements were made on an Elico conductivity bridge in college laboratory. Magnetic Susceptibility measurement were carried out using [HgCO(CNS)4] as a calibrate and infrared spectra recorded Perkin-Elmer paragon-500 Spectro-photometer using KBr Pallets. Mass spectrum of the prepared complexes and organometallic Schiff base recorded at IPCA Laboratory. Electronic spectra recorded on Cintra-5 GBC UV-Visible Spectrophotometer. X-ray powder diffraction was recorded on Joel-8030 double Goniometer X-ray powder Diffractometer. The densities of the complexes were calculated using specific density bottle in toluene solvent. TGA, DTA were recorded on Mettler Toledo stare system, in the range 250 to 1000 ºC in atmospheric Nitrogen. Iron metal estimated by Gravimetric Analysis, Pt(II) and Pd (II) metal content estimated by AAS.

Preparation of Organometallic Schiff Base Compound: 1, 1'- Ferrocen- 2, 4- dien- 1- yl- 2, 2'-dicarbaldehyde (2.34g) and 2-amino-3-iodophenol (2.04g) were separately dissolved in 20cm3 of ethanol and mixed with equimolar ratio. Stir vigorously on magnetic plate for 30 minutes, during stirring 2-3 drops of alcoholic acetic acid were added. The resulting solutions were kept in microwave oven for 10 minutes. After that, this solution will keep overnight for cooling in dark place, solid separate out. Filter the solid through whatmann 41 filter paper. The % yield of the product is 82%.

Preparation of Metal Complexes: The solutions of organometallic Schiff base ligand base (0.2M) were prepared in ethanol and metal chloride solution prepared in double distilled water. The equi-molar solutions of organometallic Schiff base (L) 0.2M and of metal chloride solution (0.2M) were keep on hot plate for 30 minutes for constant magnetic stirring. After thirty minutes 2-3 drops of alcoholic Ammonia were added and keep near about fifteen minutes in hot microwave oven. After cooling solid reappears, this solid were filtered, washed with alcohol and dried at 60 °C in dry oven for 12 hrs. The yield of product is in between 62-77%.

RESULT AND DISCUSSIONS: The prepared complexes are stable at room temperature and are non-hygroscopic on heating they decompose to high temperature. The complexes are insoluble in water but soluble in DMF/DMSO. The analytical data and physical properties are summarized under Table 2. All the prepared complexes are colored and stable at room temperature*. The complexes are insoluble in organic solvents like toluene, methanol, ethanol, acetonitrile and chloroform but they are soluble in dimethyl sulfoxide and dimethyl formamide. They are decomposed in the range 195-255 °C. The melting point and decomposition point reported in open capillary and are uncorrected. The conductivity values of the complexes are observed in dimethyl sulfoxide in 10–3 molar solution and they were non-electrolytic in nature 17.

Infrared Spectra of the Metal Ion Complexes: The IR spectra provide valuable information regarding the nature of functional group attached to the metal atom. In order to study the bonding mode of Schiff bases to metal complexes. Relevant IR bands that provide considerable structural evidence for the formation of ligand and complexes are reported in Table 3 and Fig. 1A and 1B. The infrared spectra of complexes were compared with ligand and their substituted moieties 20. The IR band assignments of all metal complexes exhibit broad bands in the range of 3375-3390 cm-1 and 3480-3510cm-1 indicating the presence of two coordinated water molecules21. A band at 1619cm–1 in free ligand is due to ν (>C = N-) vibrations. The shifting of this group to lower frequency (1592-1558cm-1) in the metal complexes when compared to free ligand, suggests the coordination of metal ion through nitrogen atom of azomethine group with metal atom would reduce the electron density in the azomethine link and thus lower the –HC=N absorption 21-22.

TABLE 3: IR SPECTRAL DATA OF THE LIGAND AND ITS COMPLEXES IN cm-1 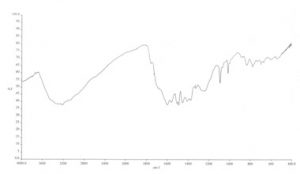 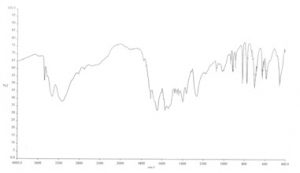 Electronic Spectra: The electronic spectra of the Co+2 and Ni+2 metal ion complexes have been recorded as DMF solutions in the wavelength range 380-900nm. The spectral parameters and their assignment are listed as in Table 4. The electronic d-d transition bands normally show weak perturbation due to complexation an increase in the intensity, shift to the red region and also splitting of some bands are observed on complex formation. The position shapes and of Co+2 and Ni+2 are observed in solution phase using ethanol and dimethyl sulfoxide. The Co+2 and Ni+2 complexes have lower energies as compared to those of aqua complex. The magnitude of the bathochromic shift of the bands in each case meagre Nephelauxetic effect (β) 26-27, the bonding parameter (b1/2) 28 and Sinha’s parameter (δ%) 29 have been calculated. The bonding parameter reflects the participation of 3d orbital. The b1/2 value obtained for the present complexes indicates a decreasing order of 3d– orbital participation in the Co+2and Ni+2 complexes. The average value of Sinha’s parameter (δ %) and η obtained in each case is positive and smaller, indicating the presence of weak covalent bonding character in the complexes.

TABLE 4: ELECTRONIC SPECTRA OF THE COMPLEXES AND PARAMETERS

It is found from the figure that the heating rates were suitably controlled at 20 °C min–1 under nitrogen atmosphere and the weight loss was measured from the ambient temperature up to 800 °C. The schemes of the both complexes are given below.

Synthesis of Nano particles: The ligand and metal solutions were mixed in equi-molar concentration and centrifugated at 4000 rpm for 2 hours. After two hours, the solution was concentration to get CuNPs. The Fig. 4 of SEM and EDX of [Cu (C24H16FeI2N2O2).2H2O] Complex. The nanoparticle further given for analysis. The EDX and SEM of these prepared nanoparticles was recorded. The size of CuNPs particles is 52-60nm 33. 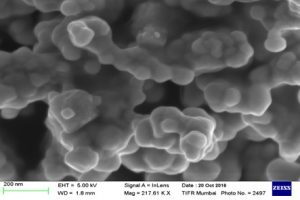 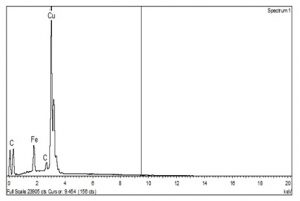 Antifungal Activity: The prepared organometallic Schiff base ligand and its complexes were evaluated for their antifungal activities against fungal strains named as Alternaria brassicae, Aspergillus niger, Fusarium oxysporum. The ligands and its complexes show variable anti-fungal activities against the fungal strains. The study indicates that the results obtained by the tested organism with diameter of inhibition zones range of 0.81-1.05cm. The activity of the ligand were effective than prepared complexes expect Pt(II), Pd(II) and Cu(II) complexes. The ligand anti-fungal activity becomes more noticeable on coordination with the metal ions under the same experimental conditions. The increasing in antifungal activity of the metal complexes may be due to the effect of the metal ion on the normal cell process. Complexation considerably reduces the polarity of the metal ion because of partial sharing of its positive charge with the donor group and possible π-electron delocalization within the entire chelate ring system that is formed during coordination 34. In addition to this, the mode of action of the compounds may involve the formation of a hydrogen bond through the azomethine nitrogen atom (>C=N) with the active centers of cell constituents, resulting in interference with the normal cell process 35. The results show that the Cu(II), Pt(II) and Pd(II) complexes exhibit higher activity against the fungus compared with other analogous complexes containing Mn(II), Co(II) and Ni(II) metal ions. 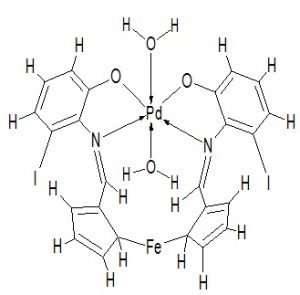 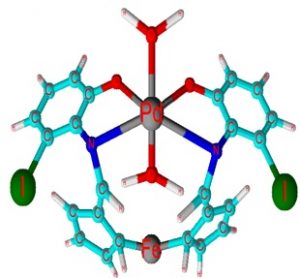 CONCLUSION: The ligand and its metal complexes of Mn(II), Co(II), Ni(II),Cu(II), Pd(II) and Pt(II) have been structurally characterized. The analytical data show that the metal ligand stoichiometry in all these complexes is 1:1. All the complexes are non-electrolytes in nature due to chloride ion are absent. The spectral data show that the ligand act as neutral and bidentate coordinating through nitrogen atom of the imino group and oxygen of Hydroxy groups. Based on analytical, molar conductance, magnetic and spectral data all these complexes are assigned to be in octahedral geometry. The size of nanoparticles is 52-60nm. The antifungal activity tests for the ligands and their complexes show enhancement of the ligands activity against the tested organism on chelation with metal ions. We are proposed the following probable structure of the complex [Pd(C24H16 FeI2 N2O2).2H2O].