ABSTRACT: Simple and sensitive spectrophotometric Method (A) and spectrofluorimetric Method (B) were described for the analysis of oxcarbazepine. The proposed methods were based on the oxidation of the drug with cerium (IV) ion in acidic medium with subsequent measurement of either the decrease in absorbance at 321 nm or the fluorescence intensity of the produced cerous (III) ion at 363 nm emission after excitation at 256 nm. All variables that affect the decrease in absorbance or the fluorescence intensity such as the concentration of cerium (IV), reaction time and temperature, and the diluting solvent were studied and optimized. Beer’s low was obeyed in the range of 0.25 - 2.5 µg ml-1 and 80 - 720 ng ml-1. LOD and LOQ were found to be 0.01 and 0.241 µg ml-1 and 17.8 and 59.33 ng ml-1 for the method (A) and method (B), respectively. These methods were validated and successfully applied to the determination of oxcarbazepine tablets with an average percent recovery ± RSD% of 100.32 ± 0.283 and 100.03 ± 0.601 for the method (A) and method (B), respectively. The obtained results were statistically compared with those of the reported method by applying t-test and F-test at 95% confidence level, and no significant difference was observed regarding accuracy and precision.

INTRODUCTION: Oxcarbazepine Fig. 1 is 10, 11-Dihydro-10-oxo-5H-dibenzo [b, f] azepine-5-carboxamide, which is flake crystals from ethanol with m.p. 215-216 ºC and reported to have an antiepileptic activity 1. Literature survey shows that several spectrophotometric 2-13, capillary zone electrophoresis 14 and chromatographic 15- 27 methods for determination of oxcarbazepine in pure form, pharmaceutical preparation and biological fluids have been reported.

Cerium (IV) ion was widely used for the analysis of many pharmaceutical compounds by spectro-photometric, spectrofluorimetric methods or both of them 28-29 were also reported. 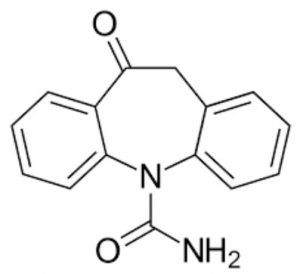 Materials and Reagents: All chemicals and reagents used throughout the work were of analytical grade.

Trileptal tablets: The product of Novartis Company, Cairo, Egypt. It is labeled to contain 300 mg of oxcarbazepine per tablet (Batch no. T0960).

Water used throughout the procedures was freshly double distilled.

Methanol and ethanol all of HPLC grades [Sigma, Germany].

Method (A): Into a series of 20 ml test tubes, aliquots of standard drug solution (0.01 mg ml-1) containing (0.0025 - 0.025 mg) of oxcarbazepine was introduced followed by the addition of 3 ml of 0.1% Ce (IV). The tubes were mixed well and heated in a boiling water bath for 45 min. Then cooled, transferred quantitatively into a series of 10 ml volumetric flasks and diluted to volume with 5 % H2SO4. Then decrease in absorbance was measured at 321 nm using the experiment a blank then plotted against the final concentration in µg ml-1 to get the calibration graph.

Method (B): Into a series of 20 ml test tubes, aliquots of standard drug solution (0.001 mg ml-1) containing (0.8-7.2 µg) of oxcarbazepine was introduced. Apply the same procedure as mentioned under method (A), but the relative fluorescence intensity was monitored at λem 363 nm after λex 256 nm against the reagent blank treated similarly and plotted against the final concentration in ng ml-1 to get the calibration graph.

Analysis of Pharmaceutical Preparation: An accurately weighed quantity of the well-mixed powdered Trileptal 300 mg tablets equivalent to 10 mg of oxcarbazepine was shaken with least amount of acetic acid then diluted with water and filtered into 100 ml volumetric flask, then the volume was adjusted to the mark with water. The obtained solution of oxcarbazepine (0.1 mgml-1) proceeded as described under “General Procedure”, adopting the methods (A) and (B). Determine the nominal content of the tablets either from the calibration curves or using the corresponding regression equations.

RESULTS AND DISCUSSION: Cerium (IV) ammonium sulfate being strong oxidizing agent was used for the determination of organic compounds. The proposed methods are based on oxidation of the selected drug with excess cerium (IV) ammonium sulphate in acidic medium and subsequent measurement of either the decrease in reagent absorbance at 321 nm, Fig. 2 or the fluorescence intensity of the produced cerous (III) ion at λem 363 nm after λex 256 nm, Fig. 3.

Effect of Temperature and Heating Time: The general procedure was repeated using a definite concentration of the drug (1.5 µg ml-1 for method A and 0.48 µg ml-1 for method B) for optimizing the heating time by heating the reaction mixture in a boiling water bath at different time intervals (10 - 60 min). [Fig. 5a & b] declared that a heating temperature at 100 ºC (Boiling water bath) for 45 min was sufficient to give complete oxidation of the drug.

Determination of Stoichiometry of the Reaction: To ascertain the stoichiometry of the reaction, continuous variation (Job’s) method 30 has been adopted. The results proved that the drug/reagent ratio was found to be 1:2, as shown in [Fig. 7a & b]. 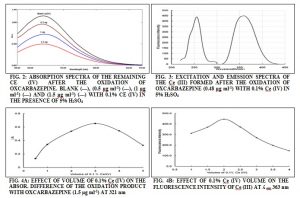 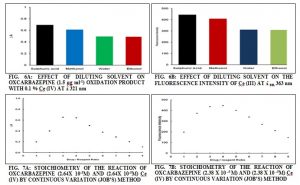 Linearity: Under the described experimental conditions, the calibration graphs for the methods (A & B) were constructed by plotting absorbance difference and fluorescence intensity versus concentration in µg ml-1 and μg ml-1, respectively. The regression plots were found to be linear over the range of 0.25 - 2.5 µg ml-1 and 80 - 720 μg ml1. The linear regression equations for the graphs are:

Where ΔA is the absorbance difference at 321 nm, and FI is the fluorescence intensity, C is the drug concentration in μg ml-1 and ng ml-1 respectively, and r is the correlation coefficient.

TABLE 1: SPECTRAL DATA FOR DETERMINATION OF OXCARBAZEPINE BY THE PROPOSED METHODS

* y= a + bx where y is the absorbance difference, and fluorescence intensity and x is the concentration

Sensitivity: The limit of detection (LOD) and the limit of quantitation (LOQ) were calculated according to ICH Q2 Recommendation20 from the following equations:

Where Sa is the standard deviation of the intercept of the regression line.

The small values of LOD and LOQ indicate good sensitivity.

Accuracy and Precision: Three replicate determinations of three different concentrations of oxcarbazepine in the pure form within linearity range were performed on the same day (intra-day) and three successive days (inter-day). Accuracy as recovery percent (R%) and precision as percentage relative standard deviation (RSD%) was calculated, and results are listed in Table 2. The small values of RSD% indicate the high precision of the method. Moreover, good R% confirms excellent accuracy.

TABLE 2: INTRADAY AND INTERDAYS ACCURACY AND PRECISION FOR THE DETERMINATION OF OXCARBAZEPINE BY THE PROPOSED METHODS

Pharmaceutical Applications: The proposed method was applied to the determination of the studied drug in its tablet preparation. The results were validated by comparison to a previously reported method 6. No significant difference was found by applying t-test and F-test at 95% confidence level, indicating good accuracy and precision of the proposed method for the analysis of the studied drug in its pharmaceutical dosage form Table 3.

TABLE 3: DETERMINATION OF OXCARBAZEPINE IN TRILEPTAL TABLETS (300 MG) BY THE PROPOSED AND REPORTED METHODS

CONCLUSION: The proposed method is simple, rapid, and inexpensive. So, it is a good alternative to the other few reported methods and the high-cost HPLC methods.

ACKNOWLEDGEMENT: The authors thank Mash Premiere for Pharmaceutical industry Company, Cairo, Egypt for providing pure oxcarbazepine to develop these methods of analysis and also thanks are due to our college at pharmaceutical analytical chemistry department at faculty of Pharmacy Al-Azhar University for their continuous prayers to complete this work.