ABSTRACT: Simple and sensitive extractive spectrophotometric methods for the determination of Ethambutol in pure form and in pharmaceutical formulations using triphenyl methane dyes have been developed. The developed methods involve formation of coloured chloroform extractable ion-pair complexes of the drug with triphenyl methane dyes viz., bromocresol green (BCG), bromocresol purple (BCP) and bromophenol blue (BPB) in acidic medium. The extracted complexes formed with BCG, BCP and BPB showed absorbance maxima at 420, 419 and 415 nm respectively.  The stoichiometry of the ion- pair complex is found to be 1:1 in each case.  Beer’s law is obeyed in the concentration ranges 2.0-25, 3.0-30 and 4.0-40 μg/ml with BCG, BCP and BPB respectively. The effect of concentration of dye, pH, and interference of excipients have been studied for optimization. The limits of detection and quantification have been determined for all the three methods. These methods have been validated as per the guidelines of ICH. The results of analysis were validated statistically through recovery studies.

INTRODUCTION:  Ethambutol is a white crystalline powder, soluble in chloroform, sparingly soluble in water, it has pKa 6.35 and 9.35, chemically called 2, 2’-(1, 2-Ethylenediimino) bis- 1-butanol [Fig.1]. It is an oral chemotherapeutic agent which is specifically effective against mycobacterium, which was the recent discovered (1961) first line treatment as anti-TB drug 1. It has excellent activity in vitro and in vivo against Mycobacterium tuberculosis.

Ethambutol is bacteriostatic to both intracellular and extracellular organisms 2. Many reports have documented the efficacy of Ethambutol for the treatment of bronchopulmonary, urogenital and osteoarticular tuberculosis and Mycobacterium avium complex 3. Microbiological and gas liquid chromatographic methods are available for assaying Ethambutol concentrations in serum and cerebrospinal fluid. In microbiological assay, when Ethambutol (EMB) is present along with other drugs in plasma, it cannot be assayed without the interference of other drugs 4. Gas liquid chromatography methods using capillary columns are available but they involve a series of steps for preparation of the sample before analysis and needs internal standard 5. Ethambutol has been routinely assayed using a non-aqueous titration method 6, 7. It was observed that with certain pharmaceutical preparations, the values were higher than the stated contents. Another method for estimation of Ethambutol content in pharmaceutical preparations involves reaction with cupric chloride and measurement of the absorption in the visible range, which is again a time consuming procedure 8, 9, 10. In drug formulations containing EMB in addition to other anti-TB drugs, EMB has to be exclusively estimated without the interference of other drugs.

According to the literature available, methods found for the determination of Ethambutol in plasma were in High Performance Liquid Chromatography (HPLC) 11, 12, 13 where, extraction process involves more time consuming and tedious steps like derivatization. Though methods are available for Liquid Chromatography Mass Spectrometer tandem Mass Spectrometry (LC-MS/MS)14-16, it is found that the chromatographic conditions and extraction processes were highly expensive as they use cartridges, and high solvent usages 17. The assay method of Ethambutol hydrochloride in the tablets given in the Chinese Pharmacopoeia (CHP) involves repeated chloroform extraction from a basic aqueous solution and subsequent nonaqueous titration18.

The chemical features of the Ethambutol drug molecule offers a lot of scope for the development of new methods for its determination with better sensitivity, specificity, precision and accuracy. The reported chromatographic techniques require expensive experimental set-up and are not affordable in every laboratories for routine analysis. Although several analytical methods for the estimation of Ethambutol are available in literature, a little attention was paid to the development of spectrophotometric methods for its determination using dyes. Spectrophotometry is considered as the most convenient analytical technique because of its inherent simplicity, low cost, and wide availability in most quality control laboratories.

So the present study reports on newly developed and validated spectrophotometric methods for the  estimation of Ethambutol in bulk and pharmaceutical formulations using triphenyl methane dyes viz., bromocresol green (BCG), bromocresol purple (BCP) and bromophenol blue (BPB) in acidic medium. The developed methods involve formation of coloured chloroform extractable ion-pair complexes of the drug with dyes in acidic medium. The proposed methods have the advantages of speed and simplicity besides being accurate and precise, and can be adopted by the pharmaceutical laboratories for industrial quantitative analysis of Ethambutol.

Ethambutol was procured from Srini Pharmaceuticals Limited, Hyderabad as a gift sample. The dyestuffs viz., BCG, BCP and BPB (AR grade) supplied by SD Fine Chemicals Ltd. Mumbai, were used without any further purification.  The dyestuffs were used as 0.025% solutions in doubly distilled water. Sodium acetate-hydrochloric acid buffers of pH 2.5, 3.0 and 3.5 were prepared by mixing 50ml of 1.0M sodium acetate solution with calculated volume of 1.0 M HCl solution and diluted to 250 ml with doubly distilled water. The pH of each solution was adjusted to an appropriate value with the aid of a pH meter. Chloroform (HPLC grade) supplied by SD Fine Chemicals Ltd. Mumbai was used throughout the work. 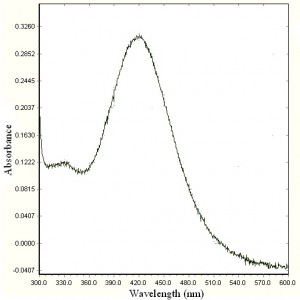 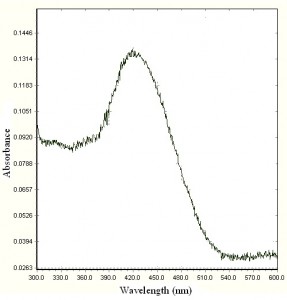 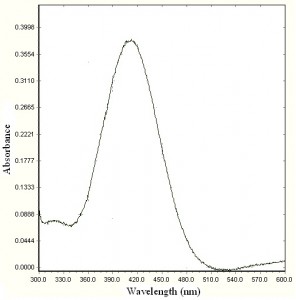 Different aliquots of drug solution were transferred into 125 ml separating funnel. To this 5 ml of buffer (pH 2.5, 3.0 and 3.5), 5 ml of dye were added and total volume was made up to 20 ml with water. 10 ml of chloroform was added and the contents were shaken for 5 min. The two layers were allowed to separate for 5 min.  The organic layer was separated and absorbance of yellow colored solution which is stable atleast for 3 hrs is measured at 420nm against blank similarly prepared. The same procedure of analysis is followed either for assay of pure drug or for dosage form. The calibration graphs (Fig.5) are linear over the concentration ranges and are within the permissible range. The optical characteristics and statistical data for the regression equation of the proposed methods are presented in Table 1. 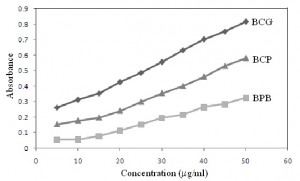 TABLE 1:  OPTICAL CHARACTERISTICS AND STATISTICAL ANALYSIS FOR THE REGRESSION EQUATION OF THE PROPOSED METHODS

aWith respect to Y=bc+a, where C is the concentration (μg ml-1) and Y is absorbance

Procedure for the assay of pure drug:

Five different solutions of pure drug in the range of calibration curve were selected and the recovery experiments were performed. The recoveries and their relative standard deviations are tabulated in Table 2.

TABLE 2: APPLICATION OF PROPOSED METHODS FOR THE ANALYSIS OF ETHAMBUTOL IN PURE FORM

Procedure for the assay of dosage forms:

Ten tablets of Combutol 10 mg each are powdered and dissolved in doubly distilled water and stirred thoroughly, filtered through a Whatman No. 42 filter paper. This solution was transferred into 100 ml standard volumetric flask and diluted with doubly distilled water as required. Different solutions of drug in the range of calibration curve were chosen and the assay was estimated using the calibration curve. The results of the recovery experiments are tabulated in Table 3.

TABLE 3: APPLICATION OF PROPOSED METHODS FOR THE ANALYSIS OF ETHAMBUTOL IN PHARMACEUTICAL FORM

Ethambutol forms ion-pair complexes in acidic buffer with dyestuffs such as bromocresol green (BCG), bromocresol purple (BCP) and bromophenol blue (BPB) and these complexes are quantitatively extracted into chloroform.  Ion-pair complexes of drug with BCG, BCP and BPB absorbed maximally at 420, 419 and 415 nm   respectively (Fig. 2-4). The reagent blank under similar conditions showed no absorption. Ethambutol contains secondary amine groups which are protonated in acid medium, while sulphonic acid group present in BPB, BTB and BCP undergoes dissociation in the pH range 1-5. The colour of the ion-pair complex is attributed to opening of lactoid ring and subsequent formation of quinoid group in dye moiety. It is appropriate to mention that the two tautomers are present in equilibrium but due to strong acidic nature of the sulphonic acid group, the quinoid body must predominate. Finally the protonated Ethambutol forms ion-pairs with dyestuffs which are quantitatively extracted into chloroform. Fig. 6 shows the possible structures of ion-pair complexes. 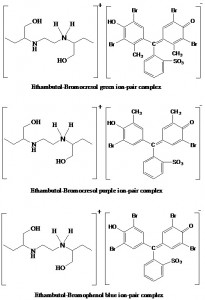 In order to establish molar ratio between Ethambutol and dyestuffs used, the Job’s method 28 of continuous variation has been applied. In this method, solutions of drug and dyestuff with identical molar concentrations (8 x 10-5M) were mixed in varying volume ratios in such a way that the total volume of each mixture was the same. The absorbance of each solution was measured and plotted against the mole fraction of the drug, [drug]/ [drug] + [dyestuff] (Fig. 7). This measurement showed that 1:1 complex was formed with each dyestuff. The formation constants29,30  were also estimated and found to be 1.39x 106, 1.61x 106 and 1.71x 106 K M-1 for complexes with BCG, BCP and BPB respectively. 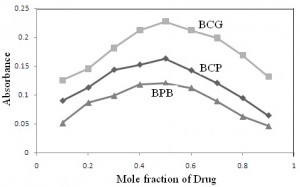 Optimization of the factors affecting the absorbance:

The influence of pH on the ion-pair formation of Ethambutol with various dyestuffs has been studied using sodium acetate-hydrochloric acid buffer. The results are shown in Fig.8. It is evident that absorbance of complexes with BCG, BCP and BPB was found to be constant within the pH ranges 2.0-3.0, 2.5-3.5 and 3.0-4.0 respectively. Thus, all the absorbance measurements were made at pH 2.5, 3.0 and 3.5 with BCG, BCP and BPB respectively. 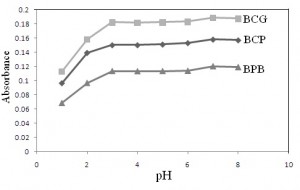 The effect of dyestuff concentrations was also studied by adding different volumes of dyestuff to a constant amount of Ethambutol (8 µg ml-1). It is apparent from Fig. 9 that the maximum absorbance, in each case, was found with 3.5 ml of dyestuff, beyond which absorbance was constant. Thus, 5 ml of each dyestuff was used for ion-pair formation throughout the experiment. 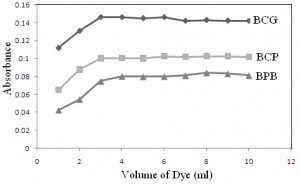 A systematic study of the effect of foreign species present along with Ethambutol on the determination of Ethambutol at 8 µg ml-1 levels was undertaken. This study was carried out by following the proposed procedures for a 10 ml sample system, by adding a known amount of foreign species to an Ethambutol solution of 8 µg ml-1. Table 4 summarizes the results obtained.  However, the drug content from the powdered capsules was extracted into chloroform, which completely removes any interference by the common excipients found in formulations.

Validation of the proposed method:

All the three  proposed methods have been validated in terms of guideline proposed by International  Conference on Harmonization 31  viz. selectivity, specificity, accuracy, precision, limits of calibration curve, LOD, LOQ, robustness, ruggedness and regression equation. The student t-test and variance F-test have been performed in comparison with a reference method. Table 1 summarizes the values for Beer’s law limits, molar absorptivity, regression equation, correlation coefficients, relative standard deviation and recoveries. To test the reproducibility of the proposed methods, six replicate determinations of 10µg ml-1 of Ethambutol were made. The coefficient of variation was found to be less than 1.2% for all the procedures.

The proposed methods have been successfully applied to the determination of Ethambutol in pharmaceutical preparations. The performance order of the proposed methods is BCG>BCP>BPB. The results obtained and shown in Table 2 and Table 3 were compared to those obtained by a reference method 31 by means of t-test at 95% confidence level. In all cases, the average results obtained by proposed methods and reference method were statistically identical, as the difference between the average values had no significance at 95% confidence level.

CONCLUSION: Ethambutol forms ion-pair complexes with acidic triphenylmethane viz., bromocresol green, bromocresol purple and bromophenol blue in 1:1 proportion. These complexes are extractable into chloroform and their maximum absorbances offer a basis for assay of the drug. The developed methods are simple, sensitive, reproducible and can be used for routine analysis of Ethambutol in pure and pharmaceutical dosage forms.