ABSTRACT: In this study, we developed a cheap and precise analytic method to measure Etodolac concentration in bulk and pharmaceutical formula. The modified, updated method depends on the reaction between ferric ion and Etodolac to yield ferrous ion. Then the former ion reacted with potassium ferric cyanide to form colored compound has a maximum absorbance at 700 nm. The method was validated by calculating the precision and accuracy. The method follows Beer-Lamber law so that we used the range between 1-22.5 µg/mL and the correlation coefficient at 0.997. Accuracy and precision of the proposed method were estimated and shown average of recoveries between (96.67-99.0%) with precision represented by RSD % equal to 1.02. We also calculated the detection limit (LOD) and quantitative limit (LOQ), which respectively were 0.6 µg/mL and 1.2 µg/mL. The modified suggested method was used to measure Etodolac in pharmaceutical preparation without drug additives interference and shows a good agreement with the standard method. Therefore, it can be used for routine works for quality control for the estimation of the Etodolac in bulk and pharmaceutical preparation as tablets.

INTRODUCTION: Etodolac is a non steroidal-inflammatory drug used for the treatment of postoperative pain and inflammation of osteoarthritis and rheumatoid arthritis 1. The principle action of Etodolac is blocking the action of prostaglandin chemokines that play a role in the inflammatory process, which characterizes by pain and fever 2. It is selective cycloxygenase COX-2 inhibitors. Etodolac recommended daily dose is 200-400 mg every 6-8 h for relieving of general pain. Recently, it is approved that Etodolac derivatives have antitumor activity 3, 4. Etodolac is presented as a racemic mixture; the (+) S stereoisomer is a biologically active form 5.

Etodolac has a relative bioavailability of 100% and it is highly plasma protein binding. Primarily, it is oxidized in the liver to give 6-, 7-, and 8-hydroxylated metabolite that is readily eliminated in urine as glucuronide conjugate 6. The chemical structure of Etodolac is [1, 8-diethyl - 1, 3, 4, 9-tetrahydropyran (3, 4-B) indol 1-acetic acid) as shown in Fig. 1.

Various analytical methods used for the determination of this drug in the body fluid and pharmaceutical preparations. These include Spectrofluorometric method 7, 8, Gas Chromatography GC 9, Sequential injection analysis 10, High-Performance Method HPLC 11-17, High-Performance Thin Layer Chromatography HTLC 18, Capillary electrophoresis 19, 20, Voltammetry 21 and UV-spectro-photometric 21-30. The current paper reports a simple, sensitive spectrophotometric method for determination of Etodolac via the reaction of the drug with ferric ion Fe3+ to form the corresponding ferrous ion Fe2+ and subsequent reaction with potassium hexacyano-ferrate to form a colored compound that is absorbed in 700 nm.

Instruments: All absorption measurements were carried out using A UV-1800 UV-Vis Spectro-photometer SHIMADZU-1800, (Kyoto, Japan) equipped with a 1.0 cm quartz cells. pH meter was used throughout this research. The solutions were heated using a water bath of frost instruments, Ltd.

Reagents and Chemicals: All chemicals used were of analytical reagent grade. Ammonium ferric sulfate, potassium ferricyanate, hydrochloric acid HCl and methanol solvent were supplied by Hi-Media, India. The drug was obtained in pure form from SDI- Samarra, Iraq. Etodolac (Lodine)R (400mg) tablets were purchased from the local a market (Drogsan).

Standard Stock Solutions: (1 µg/mL) of Etodolac were prepared by dissolving 0.1000 g Etodolac in 1:9 v/v methanol: water. Then the solution was diluted to the 100 ml in a volumetric flask.

Recommended Procedure: In a series of 10 ml volumetric flasks, transfer increasing of different volume of Etodolac (100 µg/mL) to cover the range of calibration curve (1-22.5) µg/mL, added 2 ml (1000 µg/mL) of ammonium ferric sulfate and shook well.  A 2.5 ml (1000 µg/mL) of K3Fe(CN)6 was added then 1 ml of concentrated HCl was added, and the solution was left for 10 min at water bath at 30 ºC, then make the solution to the marks with distilled water. We measured the absorbance of the colored formula, which we got at 700 nm after we set up the reagent blank.

Procedure for Pharmaceutical Preparation: Ten tablets of 400 mg of the drug per tablet were accurately weight and grounded well in a mortar. An accurate weight of final powdered equivalent to 0.1000 g was dissolved in (1:9) methanol: distilled water. The prepared solution was transferred to 100ml calibrated flasks and shaken well for ten min; then, this solution was filtrated using a Whatman filter paper no. 42 to avoid any suspended particles. The general procedure was then applied in concentration ranges previously cited above.

RESULTS AND DISCUSSION: Different parameters that influence on the sensitivity and stability of the forming complex were carefully studied and optimized.

The Spectrum of the Complex: The purposed method is based on the reduction of iron Fe+3 III to iron Fe+2 II by Etodolac in the presence of concentrated hydrochloric acid. Subsequently, these ions have were reacted with potassium ferric cyanate to produce blue colored products. The absorption spectrum of the complex species in this method at the optimum conditions was scanned against a reagent blank in the range 400-800 nm and show that has a particular λmax at 700 nm Fig. 2. Whereas the reagent blank recorded negligible absorbance at the same λmax. 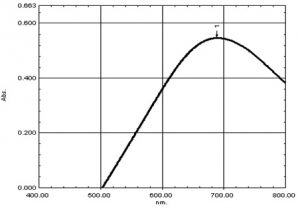 Effect of Ferric Ammonium Sulfate Concentration: The complex formation reached its maximum when 2 ml of 1000 μg/mL of ferric ammonium sulfate solution was added to a mixture of etodolac and ferric potassium cyanate. Therefore, this amount used in the procedure was suitable because it gives high and reproducible color intensity as shown in Fig. 3.

Effect of Different Acids on the Absorbance of the Colored Compound: Different acids were tested individually to study their effect on charge transfer reaction as H3PO4, H2SO4, HNO3, CH3COOH, and HCl acids. It was found that all these acids give unsatisfactory results except HCl acid. The effect of volumes 0.5 - 3 ml of HCl solution on the absorbance of the colored complex was studied. Thus, 1 ml of concentrated hydrochloric acid was adequate and sufficient for completing the reaction and giving a stable complex. Moreover, a further increase in HCl volume decreases the complex absorbance.

Effect of Reaction Time: It was observed that the absorbance of the complex was increased with increasing of the time of reaction and reached a maximum at 10 min. Therefore; 10 min was chosen for further use.

Effect of Temperature: The optimum reaction temperature in a water bath that gives high absorbance was 30 ºC. At this temperature, Etodolac reacts with reagents to give colored complex that was stable for a period of more than 2h.

Order of Addition: The effect of the order of addition on the intensity of the colored compound was studied. Table 1 shows the order of addition was followed as given under the general procedure, Drug: K3Fe(CN) 6: NH4Fe(SO4)2 because it gave the highest absorption value. So it was chosen for further study.

TABLE 1:  EFFECT OF ORDER OF ADDITION

Calibration Graph: Under the optimum conditions, a linear calibration graph was established by making serial dilution of etodolac and employing the condition stipulated under the correlated recommended procedure, it obeyed Beer`s law in range of (1-22.5) µg/mL, the linear regression equation obtained was (y= 0.0314×+ 0.1006) with correlation coefficient of 0.997 Fig. 5. The molar absorptivity value was estimated (2.4 × 104 L.mol-1.cm-1) and is indicated that the method used is sensitive as listed in Table 2. Limit of quantification LOQ and limit of detection LOD were calculated based on standard deviation and the slop of calibration graph 31.

Precision and Accuracy: The efficiency of the method was statistically assessed by measuring the accuracy and precision of the suggested method. The accuracy was known as percentage relative error (RE% = found concentration- taken concentration ×100/ taken concentration) and the relative standard deviation (RSD %) was shown according to the accuracy of the tested method. However, the accuracy of the modified analytical method was measured for a series of five replicates at three levels of Etodolac concentration (4, 10 and 20) µg/mL. RSD% was found to be 1.02%, and RE% was found to be 1.01%. These results indicated that this method is as accurate and precise as summarized in Table 3. 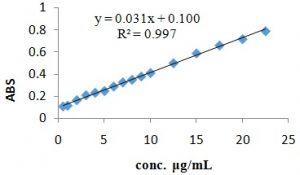 TABLE 3: THE ACCURACY AND PRECISION OF THE PROPOSED METHOD

Interference: The interference effect of some excipients, which often brought pharmaceutical formulation, was examined by measuring the absorbance of a solution of 30 μg/mL that containing 100 μg/mL of the drug and variety excipients to the final volume 10 ml. Interestingly, we found that the chosen excipients did not affect the results even when used in large doses see Table 4.

TABLE 4: THE EFFECT OF EXCIPIENTS (100 μg/mL) ON THE RECOVERY

Analytical Applications: The proposed method was effectively applied to determine Etodolac in its commercial formulation obtained. The amount of tablet containing 400 mg Etodolac was determined for five determinations as in Table 5.

Stoichiometric Ratio for the Formation of Colored Complex: By application of Job’s method of continuous variation 32. It was found that the selected drug form a colored complex product with the reagent in a 1:1 molar ratio as shown in Fig. 6 which represented Job’s plot of Etodolac with the reagent.

FIG. 6: STOICHIOMETRIC RATIO FOR THE FORMATION OF COLOURED COMPLEX

CONCLUSION: A soluble colored complex has been synthesized successfully via chelation of potassium hexacyanoferrate(ΙΙΙ) with iron (ΙΙ) that was formed from the reduction of iron(ΙΙΙ) by Etodolac. It is concluded that the proposed method is a precise, accurate and reproducible for determination of Etodolac in the pure and pharmaceutical formulation without the interference of any excipients. The proposed method was rapid, less time consuming than other spectrophotometric methods and linked with good accuracy and precision which rend the method appropriate for a routine assay of Etodolac in quality control in laboratories. Besides, this simple method doesn`t require any procedure of extraction, prior treatment of drug and expensive reagents.

ACKNOWLEDGEMENT: The authors would like to express special thanks to the staff of Pharmaceutical Chemistry Department, Faculty of Pharmacy, University of Kerbala, Iraq for providing the support to carry out research work. Furthermore, the authors also would like to thank the reviewers for their valuable comments and recommendations to develop the quality of this paper.

CONFLICT OF INTEREST: The authors announce no conflict of interest.