INTRODUCTION: Anagliptin is used for type 2 diabetes mellitus and longer duration of action for treatment of type 2 non-insulin dependent diabetes mellitus disease as a Dipeptidyl Peptidase 4 inhibitor 1-6. Anagliptin N-[2-[[2-[(2S)-2-Cyano-pyrrolodin-1-yl]-2-oxoethyl] amino]-2-methylpro-pyl]- 2- methylpyrazolo [1, 5-a] pyrimidine- 6-carboxamide Fig. 1 is a Dipeptidyl Peptidase 4 inhibitor which is used in treatment of type 2 NIDDM 7.

Dipeptidyl Peptidase 4 enzyme breaks down the incretins GLP-1 gastrointestinal hormones released in response to a meal. By preventing GLP-1 inactivation, they are able to increase the secretion of insulin and suppress the release of glucagon by the alpha cells of the pancreas. This drives blood glucose levels towards the normal level. This drug is not official in any of the pharmacopeias. A literature survey revealed that few methods are reported for determination of ANA, either alone or in combination 8, by spectrophotometric 9-11, HPLC 12, LC/MS 13.

Metformin is chemically a1-Caramimidamido-N, N-Dimethylmethanimidamide Fig. 2, and has pharmacologically is based on the Biguanides category. It suppresses hepatic gluconeogenesis and glucose output from the liver. This is the major action responsible for lowering blood glucose in diabetics. It is official in IP 14, BP 15, and USP 16. Literature review reveals that many spectro-photometric 17, HPLC 18, HPTLC 19 methods are reported for determination of MET, either alone or in combination 8.

Chemicals and Reagents: Drug samples of ANA and MET were provided as a gift sample by Intas Pharmaceutical Pvt. Ltd., Ahmedabad, India. Solvents like Distilled water were from E. Merck, Mumbai. All the chemical reagents were of analytical grade.

Preparation of Standard Stock Solution: Accurately weighed quantity of 10 mg of ANA and 10 mg of MET were transferred into 100 mL volumetric flask individually. Initially, about 50 mL distilled water was added to the flask, respectively, and sonicated. The volume was made up to the mark with distilled water to prepare stock solutions to correspond to 100 μg/mL of ANA and 100 μg/mL of MET.

Determination of Wavelength for Second Order Derivative Method: The second-order derivative method was selected because the spectral characteristics and resolution were good in the second derivative spectra. The zero-crossing points of ANA 234 nm and for MET 244 nm were selected based on linearity data. At 234 nm ANA showed zero absorbance, but MET had considerable absorbance. Similarly, at 244 nm MET showed zero absorbance, but ANA had a considerable amount of absorbance. 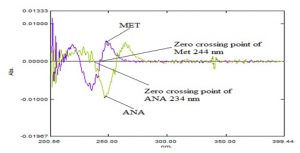 Method Validation: The proposed method was validated as per ICH guidelines Q2 R1 20.

The same study was carried out three times at each level of recovery.

TABLE 2: REPEATABILITY, INTRADAY AND INTERDAY PRECISION OF ANA AND MET 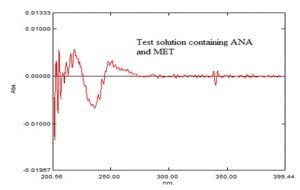 CONCLUSION: The proposed spectrophotometric method is precise, specific, linear, and accurate for the estimation of ANA and MET in the pharmaceutical dosage form without interference from the excipients. The developed method is validated as per ICH guidelines. The method was successfully used for the simultaneous estimation of both drugs in the presence of each other.

ACKNOWLEDGEMENT: The authors are grateful to INTAS Pharmaceuticals, Ahmedabad, for providing a gift sample of ANA and MET.