ABSTRACT: A simple and sensitive spectrophotometric method has been developed for the determination of Clomipramine in bulk and tablet dosage forms. The method was based on the charge transfer reactions of Clomipramine with 2, 3-dichloro-5, 6-dicyano-1, 4-benzquinone. The absorbance of the highly intensive coloured solution was measured at 470 nm against reagent blank treated similarly. Beer’s law is obeyed in the concentration range of 50-250 μg/ml. Statistical analysis proves that the proposed method is reproducible and selective for the routine analysis of pharmaceutical formulations of Clomipramine.

INTRODUCTION: 2,3-Dichloro 5,6- dicyano- p-benzoquinone (DDQ ) is an oxidizing 1, dehydrating agent 2 in synthetic organic chemistry as well as it is known for its interaction with drugs having donor sites in their structures, and form ion-pair charge transfer complexes which offers a basis for quantification of the drugs 3-6.

Clomipramine (CP): Clomipramine chemically, 3-(9-chloro-5, 6-dihydrobenzo [b][1]benzazepin-11-yl)-N,N-dimethyl propan-1-amine. A  tricyclic antidepressant similar to IMIPRAMINE that selectively inhibits the uptake of serotonin in the bin. It is readily absorbed from the gastrointestinal tract and demethylated in the liver to form its primary active metabolite, desmethylclomipramine. The structural formula of Clomipramine is given in fig. 1

Uses: It contain a fused three-ring moiety and are used in the treatment of depression.

The objectives of the work are to develop new spectrophotometric method for its estimation in bulk and tablet dosage form with good accuracy, simplicity, precission and economy. ence, the present work deals with the spectrophotometric estimation of Clomipramine using 2,3-dichloro 5,6-dicyano-1,4-benzoquinone .

Instrumentation: After due calibration of the instrument, spectral and absorbance measurements are made using ELICO UV-160 A double beam Spectrophotometer manufactured by M/S ELICO private Limited, Hyderabad, India. All the chemicals used were of analytical grade. All the solutions were freshly prepared with double distilled water. Reagents were prepared a fresh for every method.

Preparation of Standard solution of drug: Pure clomipramine (50 mg) is dissolved in 50 ml methanol to obtain a stock solution of 1 mg/ml. The final concentration of clomipramine is brought to 100 mg/ml with methanol.

Procedure: The wavelength of maximum absorbance of the Clomipramine drug treated with DDQ solution is ascertained by the following procedure. 1ml of Clomipramine solution (100µg/ml) is transferred into a standard flask. To this solution 1.0 ml of DDQ reagent is added to form honey colour solution. The final volume is brought to  10 ml with chloroform. The resultant solution is mixed well and allowed to stand for 5 min for complete the reaction. The absorbance of the honey colour solution is measured at the wavelength range of 400 to 600 nm, against the reagent blank (prepared in same manner omitting drug solution). The figure of absorbtion spectrum is given in  fig. 2. 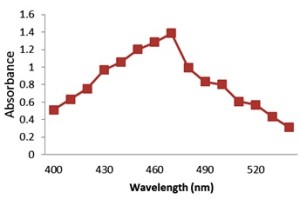 From fig. 2, it is clear that the Clomipramine drug treated with DDQ solution has maximum absorbance at 470 nm 8-11. Hence, all further studies are made at 470 nm.

Assay Procedure: To study the effect of drug concentration on the absorbance of the charge transfer complex under optimal conditions now arrived is studied by the following method to know the suitability of the method for the assay of Clomipramine.

Variousaliquots of the standard Clomipramine solution ranging from 0.5-2.5 ml are transferred into a series of standard flasks. To each flask, 1.5 ml of DDQ solution is added to produce honey colour. The final volume is brought to 10 ml with chloroform.

The reaction mixture in each flask is shaken well and allowed to stand for 5 min to complete the reaction. The absorbance of the honey colour solution is measured at 470 nm, against the reagent blank (prepared in similar manner omitting drug solution). Calibration graph is obtained by plotting absorbance values against the concentration of Clomipramine solution.

The calibration curve is found to be linear over a concentration range of 50 to 250 mg/ml of Clomipramine. The linearity of the curve obtained indicates that it obeys Beer’s law. The amount of Clomipramine present in the sample is read from the calibration graph. The results are presented in fig. 3.

Analysis of Tablets: The method is then applied to the determination of the drug from the marketed tablet formulations. Tablets are weighed and contents are powdered and well mixed. The powder equivalent to 50 mg of Clomipramine is dissolved in chloroform, the volume is made upto 50 ml with chloroform, filtered, residue is washed with chloroform. Further dilution is made as described in the preparation of standard solution of Clomipramine. Further analysis is carried out as per procedure described above and results are summarized in Table 1. The amount of drug present in the sample is estimated from calibration graph.

TABLE 2: ASSAY OF CLOMIPRAMINE BY DDQ METHOD IN PHARMACEUTICAL FORMULATIONS

Average  ± Standard deviation of six determinations, the t & F-values refer to comparision of the  proposed method with reference method. 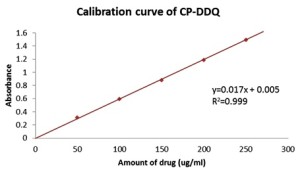 RESULTS AND DISCUSSION: The developed method based on the reaction of Clomipramine as n-electron donor with acceptor, 2, 3-dichloro-5, 6-dicyano-1, 4-benzquinone. The absorption spectral analysis shows that the maximum absorbance of Clomipramine was found to be 470 nm. It was observed that the absorbance started decreasing above 1.5ml of DDQ solution. Hence, 1.5ml of DDQ solution was used for further studies. The calibration curve was obtained for a series of concentration in the range of 50-250μg/ml. Statistical analysis was carried out and the results were found to be satisfactory. The recovery technique was performed to study the accuracy and reproducibility of the proposed method. The results are shown in Table 1.

The optical characteristics such as absorption maxima, Beer´s law limits are presented in Table 2. The regression analysis using method of least squares was made for the slope (m), intercept (c) and correlation (r) obtained from different concentrations and results are summarized. The percent relative standard deviation, standard deviation and student’s ’t’ test values calculated from the six measurements of Clomipramine are presented in Table 1.

Relative standard deviation values and standard deviation were low that indicates the reproducibility of the proposed method. In the student’s ’t’ test, no significant differences were found between the calculated and theoretical values of both the proposed methods at 95% confidence level. The proposed method is found to be simple, precise, accurate and time saving, reproducible and can be conveniently adopted for routine analysis of estimation of Clomipramine in bulk drugs samples and pharmaceutical formulations.

CONCLUSION: The proposed method is found to be simple, precise, accurate, time saving and economic can be conveniently adopted for routine analysis of estimation of Clomipramine  in bulk drug samples and pharmaceutical formulations as seen from the agreement of the amount of Clomipramine  in the present method and the labeled amount of the pharmaceutical preparation.

ACKNOWLEDGEMENTS: The author is grateful to BAL Pharma Ltd, Bangalore, for providing pure drug samples, Department of Chemistry, S.K. University, Kurnool, A.P. for their continuous support and encouragement for providing the necessary infrastructure and facilities for executing this work.