The objective of this study was to develop simple, precise, accurate, reproducible and economical vireodt's method for simultaneous estimation of mesalamine (MSM) and prednisolone (PRD) in combined oral dosage form. The method involved measurement of absorbance at two wavelengths, 332nm and 246nm, λmax of MSM and PRD, respectively in phosphate buffer (pH 7.4) with dimethyl formamide (DMF) as cosolvent.   The linearity was obtained in the concentration range of 5-50 µg/ml and 2-20 µg/ml for MSM and PRD, respectively. The average percent recovery of MSM and PRD was found to be 99.19+0.78% and 99.71+0.82%, respectively. The accuracy and precision were determined and recovery studies confirmed the accuracy of the developed method that was carried out following the International Conference on Harmonization (ICH) guidelines. The recovery study was carried out by standard addition method. The proposed method was found to be rapid, specific, precise, accurate, and reproducible and can be successfully applied for the routine analysis of MSM and PRD in pharmaceutical dosage form.

INTRODUCTION: Mesalamine (MSM) (Figure 1) is chemically (5–amino–2–hydroxy benzoic acid), is an anti-inflammatory drug used to treat inflammation of the digestive tract (crohn’s disease) 1, 2 and mild to moderate ulcerative colitis 3. It is a bowl-specific amino salicylate drug that is metabolized in the gut and has its predominant actions there, thereby having fewer systemic side effects 4. 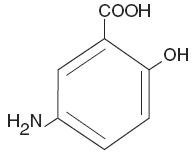 Prednisolone (PRD) (Figure 2) is chemically (11β)-11, 17, 21 trihydroxypregna-1, 4-diene-3, 20-dione), is a typical glucocorticoid has been used for the treatment of ulcerative colitis as the second line drug in the therapy 5, 6. It has predominant glucocorticoid and low mineral corticoid activity and used for the treatment of a wide range of inflammatory and auto-immune diseases 7. 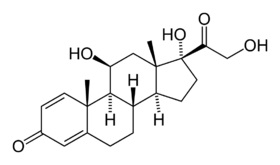 Reagents and Materials: MSM and PRD were supplied as a gift samples by Cipla Ltd., Ratlam (India) and Kwality Pharmaceuticals Pvt. Ltd., Amritsar (India) respectively. All other chemicals and reagents used were analytical grades.

Preparation of Standard Stock Solutions: Standard stock solutions (1000µg/ml) of MSM and PRD were prepared by accurately weighed 10 mg of MSM and PRD transferred in to 100 ml of volumetric flasks separately. Dissolved and diluted in minimum quantity of dimethyl formamide (DMF) and made up to the volume 10 ml with PBS (pH 7.4).

Study of Spectral and Linearity Characteristics: The standard stock solutions of MSM and PRD were further diluted with minimum quantity of dimethyl formamide (DMF) then finally diluted with PBS (pH 7.4) to get a concentration of 10 µg/ml of each. Both the solutions were scanned in the spectrum mode between the ranges of 200-400 nm against PBS (pH 7.4) as a blank and the overlain spectrum was recorded. The overlain spectra showed isoabsorptive point at 287 nm.

The concentrations of two drugs in the mixture were calculated using the following equations.

Simultaneous equation was developed using the following set of equations:

Where Cx and Cy are concentration of MSM and PRD, respectively.

The calibration curves for MSM and PRD were prepared in the concentration range of 5-50 µg/ml and 2-20 µg/ml for MSM and PRD, respectively at all selected wavelengths 8, 9, 10.

Substituting the values of ax1, ax2, ay1 and ay2 (from table 1 and 2) the equation could be rearranged as:

Where Cx and Cy are the concentration in µg/ml.

Statistical Validation of Proposed Method 11, 12: The method was validated according to ICH Q2 B guidelines for validation of analytical procedures in order to determine the linearity, sensitivity, precision and accuracy for the analytes.

Linearity (Calibration Curve): Linearity was studied by plotting the calibration curves using the standard solutions in concentration range of 5-50 µg/ml and 2-20 µg/ml for MSM and PRD, respectively and linear regression analysis was carried out.

Limit of Detection (LOD) and Limit of Quantitation (LOQ): LOD and LOQ of MSM and prednisolone were calculated using the following equations; LOD = 3.3 (σ/S) and LOQ = 10 (σ /S), where σ is standard deviation (SD) of the y-intercept of calibration curve and S is slope of regression equation 12.

Accuracy: In order to check the accuracy and reproducibility of the developed method, recovery study was carried out by taking standard mixture solution of both drugs and absorbance was determined at 332nm for MSM and 246nm for PRD.

Sensitivity: Sensitivity of both of these drugs was separately evaluated by estimating Sandell’s sensitivity (µg/cm2/0.0001 Abs unit) to determine the minimum amount of substance that can be quantified in column of unit cross section.

RESULTS AND DISCUSSION: In simultaneous equation method, the primary requirement for developing a method for analysis is that the entire spectra should follow the Beer’s law at all the wavelength, which was fulfilled in case of both these drugs. The overlain UV absorption spectra of MSM and PRD exhibit λmax of 332 nm and 246 nm for MSM and PRD, respectively which are quite separated from each other (Figure 3). 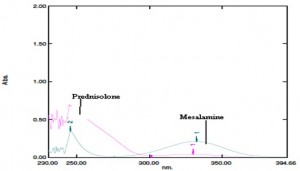 The two wavelengths were used for the analysis of the drugs were 332nm (λmax of MSM) and 246 nm (λmax of PRD) and at which the calibration curves were prepared for both the drugs. Standard calibration curves for MSM and PRD were linear and obey Beer Lambert's law in concentration range of 5-50 µg/ml and 2-20 µg/ml for MSM (Table 1, Figure 4) and PRD (Table 2, Figure 5), respectively. The correlation coefficients (r2) values 0.996 and 0.997 for MSM and PRD, respectively at all the selected wavelengths and the values were average of three readings with standard deviation in the range of 0.0008 – 0.0059 (Table 3). 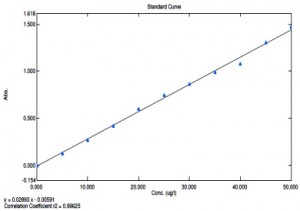 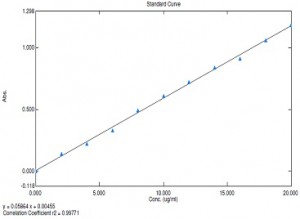 The accuracy of the method was confirmed by recovery studies from synthetic mixtures of standard additions method. The recovery of MSM and PRD from the standard mixture solution was found to be 99.19+0.78% and 99.71+0.82% respectively (Table 5). The recovery results indicated that the method was accurate.

TABLE 5: RECOVERY STUDIES OF SYNTHETIC MIXTURES OF MSM AND PRD

CONCLUSION: The proposed method for simultaneous estimation of MSM and PRD in combined oral dosage forms was found to be simple, accurate, precise, reproducible, economical and rapid. In the method, percentage recovery was close to 100% and % RSD was less than 2% for both the drugs. Hence, it can be employed for routine analysis in quality control.