SPECTROPHOTOMETRIC METHOD FOR THE DETERMINATION OF THIAMINE HYDROCHLORIDE IN PURE FORM, PHARMACEUTICAL AND BIOLOGICAL FLUIDS

SPECTROPHOTOMETRIC METHOD FOR THE DETERMINATION OF THIAMINE HYDROCHLORIDE IN PURE FORM, PHARMACEUTICAL AND BIOLOGICAL FLUIDS

ABSTRACT: Thiamine hydrochloride, also known as Vitamin B1, is a water-soluble vitamin which is important biologically and pharmaceutically. A new simple and sensitive spectrophotometric method has been developed for the determination of Thiamine Hydrochloride (Vitamin B1) in pure form and biological fluids. The method is based on the diazotization reaction of Thiamine Hydrochloride with Procaine HCl which reacted with sodium nitrate and hydrochloric acid to form a red water-soluble azo dye in basic medium, that has a maximum absorption at λmax = 507 nm. Beer's law is obeyed over the concentration range (2-60 µg.ml-1), the molar absorptivity of 4.047x104 L.mol-1 .cm-1 and Sandell sensitivity of 7.417x10-3 µg .cm-2 and the method have an accuracy and precision between (0.02-0.16) while the relative standard deviation between (0.805-2.049). The structure of dye showed that (1:2) product was formed between the drug and diazotized reagent. The method was applied successfully for the determination of Vitamin B1 in pharmaceutical preparations and biological samples. The results showed that the concentration of vitamin B1were decreased, in both blood and urine samples, with time after taken a therapy.

INTRODUCTION: Thiamine hydrochloride (vitamin B1), a water-soluble vitamin, is a biologically and pharmaceutically important compound. THC is 3 - [(4-Amino – 2 - methy lpyrimidin-5–yl) methyl]-5-(2-hydroxyethyl) - 4-methylthiazolium chloride hydrochloride, C12H17ClN4OS, HCl, whereas its chemical structure is 1 contains an aminopyrimidine ring and a thiazole ring with methyl and hydroxyethyl side chains linked by a methylene bridge.

It is soluble in water, methanol, and glycerol and practically insoluble in acetone, ether, chloroform and benzene. It is stable in acidic solution and during frozen storage, but it is unstable in alkaline solution, heat, and when it is exposed to ultraviolet light and gamma irradiation 2.

This vitamin plays a biological role in the metabolic process of the carbohydrate in human body, keeps the normal function of nerve, cardiac muscle and digestive processes, and it is used for the treatment of Beriberi and different forms of polyneuritis. Thiamine is also essential to the mental health especially the emotional aspect 3. There are a variety of physical conditions and diseases associated with deficiencies in vitamin B1. Symptoms include pain, numbness and tingling in the extremities, muscle weakness, and a lack of physical coordination, particularly in the larger muscle masses that make up the leg muscles. A deficiency in thiamine can cause enlargement of the heart, and this can lead to congestive heart failure and lung congestion. A severe deficiency in vitamin B1 can lead to nerve damage, brain damage, and even death. Mental symptoms associated with a serious lack of vitamin B1 include fatigue, psychosis, and confusion 4, 5.

Multivitamin pharmaceutical preparations containing mixtures of these substances are very interesting for analysis, and most of them include the water-soluble B-group. The term B-group vitamins usually refers to thiamine, riboflavin, pyridoxine, nicotinic acid, pantothenic acid, biotin, cyanocobalamine and folic acid 6.

Thiamine is sometimes called an "anti-stress" vitamin because it may strengthen the immune system and improve the body's ability to withstand stressful conditions 7. It plays an important role in Wernicke–Korsakoff syndrome, a form of amnesia caused by brain damage occurring in long-term alcoholics who rely mainly on alcohol for nutrition 8.

Since 1950, the chemical determination of thiamine has used the derivatisation of thiamine to thiochrom by alkaline K3[Fe(CN)6], followed by extraction with 2-methyl-1-propanol. Finally, fluorescence detection was used for quantitation 9. Although, this procedure is the official U.S.P. method 10, the thiocrome procedure requires a skilled technician since the analytical steps such as oxidation of thiamine, solvent extraction and centrifugation must be performed under subdued light because both thiamine and thiocrome are light sensitive.

3-Sodium nitrite solution (5 x 10-2M): prepared by dissolving 0.3450 gm of NaNO2 (Merck) in distilled water and diluting to the mark of 100 ml volumetric flask, then diluted solutions was prepared by simple dilution.

5- Sodium hydroxide (1M): This was prepared by dissolving 10 gm of NaOH (Merck) in 250 ml volumetric flask with distilled water.

Injection sample: The contents of ten ampoules of Thiamine HCl were mixed. An aliquot corresponding to 100 mg of Thiamine HCl (2 ml) was diluted to 100 ml with distilled water in a volumetric flask to obtain approximetly1000 μg ml-1 of Thiamine HCl.

Tablets sample: Ten tablets were accurately weighted and finely powdered. An accurately weighed amount equivalent to 100 mg of the pure drug, was transferred into a 100 ml volumetric flask, then dissolved with distilled water and completed to the mark with the same solvent. The flask with its contents was shaked well and filtered.

Venous blood samples (5 ml) were drawn at different time points (0.5, 2, 4, 6, 24) hours after the last day of administration and injection, then transferred immediately to a clean dry plain tube. The blood sample was allowed to clot for at least 10-15 min at room temperature and then centrifuged for 10 min at 3000 Xg. Serum was collected and stored at -20°C for later determination, 0.5 ml of the serum were used in subsequent experiments.

Two groups of urine samples were used  first group represent the volunteer has been take Vitamin B1 tablets (Thaimine HCl/100 mg), 10 tablets / 4days, while the second group represent the volunteer has been take one ampoule of Vitamin B1 injection (100 mg/2ml). Both samples were drawn at different time points (2, 4, 6, 8, 24) hours 26 after the last day of administration and injection. The urine samples were centrifuged for 20 min at 3000 Xg. urine was stored at -20°C for later determination, 0.5 ml of the urine were used in subsequent experiments.

Throughout the preliminary study on the diazotization reaction of Thiamine HCl, with diazotized Procaine HCl in basic medium a red water-soluble azo dye was obtained with a maximum absorbance at 507 nm (Fig. 1). The absorbance of the azo dye solution measured versus reagent blank which has a negligible absorbance at this wavelength. 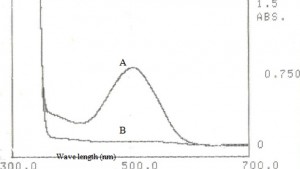 FIG.1: ABSORBANCE SPECTRA OF THE AZO DYE (500 µg.ml-1 of THIAMINE HCl), AGAINST BLANK (A) AND BLANK AGAINST DISTILLED WATER (B).

Optimization of the Experimental Conditions:

The effect of various parameters on the color development was studied to establish the optimum conditions for the determination of Thiamine HCl.

In the subsequent experiments, 1 ml of Thiamine HCl solution (500 µg.ml-1 = 1.662 x 10-3M) with diazotized procaine HCl and NaOH was taken in to 10 ml final volume and the absorbance of the series of solutions were measured by varying one and fixing the other parameters at 507 nm. versus reagent blank.

In practice, the addition of acid to the diazonium reaction was necessary for the formation of diazonium salt between the amine group (Procaine HCl) and sodium nitrite, which couples with amino reagent (Thiamine HCl) to give an azo dye therefore, various acids were studied (acetic acid, hydrochloric acid, nitric acid, phosphoric acid and sulfuric acid), hydrochloric acid seems to be the most suitable acid through the high absorbance under the reaction condition. When various concentrations of Hydrochloric acid (0.1-3.0M) were added to the solution of 1 ml of Procaine HCl (2.5 x 10-2M ) with equal amount of  sodium nitrite, 1 ml of Thiamine HCl  and 1 ml of 1M NaOH. The concentration of 1M seems to be the suitable concentration, and was considered to be optimum as shown in (Fig. 2). 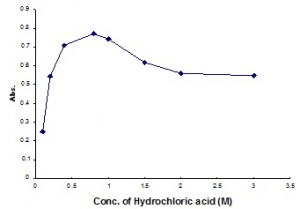 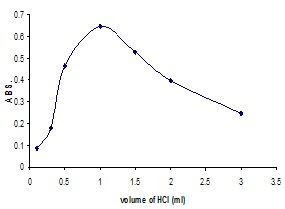 3-Effect of order of addition:

To optimum results, the order of addition of reagents should be followed as: diazotized procaine HCl followed by Thiamine HCl solution and then NaOH was taken in to 10 ml final volume otherwise a loss in color intensity and stability was observed.

5- Effect of time on the stability of the dye:

Calibration Graph: Employing the conditions described under procedure, a linear calibration graph (Fig.6) for Thiamine HCl was obtained, and Beer's law was obeyed over the concentration range of  graph (50-1000 µg in a final volume of 10 ml), or (5-100 µg.ml-1) with a correlation coefficient of 0.9956 and an intercept of  0.0189. The conditional molar absorptivity of the red dye formed with reference to Thiamine HCl was found to be 4.047x104 L.mol-1.cm-1 and a Sandell sensitivity of 7.4173x10-3 µg. cm-2.

Accuracy and Precision: To determine the accuracy and precision of the method, Thiamine HCl was determined in three different concentrations. The results shown in Table 1, indicate that a satisfactory precision and accuracy could be obtained with the proposed method.

Structure of the Dye: Under the reaction conditions, the reaction was carried out as described in Fig. 7. The aromatic amino group present in Procaine HCl is diazotized with nitrous acid (NaNO2/HCl) and diazonium salt thus formed is coupled with THC at room temperature. The stoichiometry of the reaction was studied using equimolar concentrations (1.662×10-3 M) of the drug and diazotized reagent under the recommended optimum conditions and applying Job’s method 27. Moreover a mole ratio 28 method was also applied using increasing volume (0.1 to 3.00 ml) of 1.662×10-3 M of diazotized reagent to a fixed volume (1ml) of THC of the same concentration. The obtained results in (Fig. 7) and (Fig. 8) showed that a 1:2 (THC: DPH) product was formed between the drug and diazotized reagent at 507 nm, therefore the free amino group of THC is reacted with diazonium salt and the other diazonium molecule is reacted through the thiazole ring 29.

A reaction subsequent based on the above results is shown in Scheme 1.

The conditional or apparent stability constant 27 of the 1:2 (THC: DPH) product was evaluated as follows: An equimolar concentration (3.324×10-4 M) of both drug and reagent were prepared. Two sets of solutions were prepared, first set of solutions were formulated to contain a twofold excess amount of the reagent (DPH) and the second set was formulated to contain tenfold excess of reagent.

TABLE 2: APPLICATION OF THE PROPOSED METHOD OF THIAMINE HCl IN PHARMACEUTICAL PREPARATIONS

Blood samples: The precipitation of protein using 10 % trichloroacetic acid (TCA 10%) was not necessary in this study, because there is no difference between the absorption with or without TCA addition. Two types of drugs containing Vitamin B1 (Thaimine HCl/100 mg) have been take as a tablets and injection. The samples of blood were treatment as above and analyzed using the proposed procedure and they gave the results shown in Fig.9 and Table 3. Our findings show that the concentration of Vitamin B1 decreased with time.

TABLE 3: APPLICATION OF THE PROPOSED METHOD ON VITAMIN B1 IN BLOOD SAMPLE

FIG.9: EFFECT OF TIME ON ABSORBANCE OF TWO BLOOD SAMPLES CONTAINING VITAMIN B1.

Urine samples: Two types of drugs containing Vitamin B1 (Thaimine HCl/100 mg) have been take as a tablets and injection, and the samples of urine was treatment as above and analyzed using the proposed procedure and they gave the results shown in Fig. 10 and Table 4. Our findings show that the concentration of Vitamin B1 decreased with time.

FIG.10: EFFECT OF TIME ON ABSORBANCE OF TWO URINE SAMPLES CONTAINING VITAMINE B1.

TABLE 4: APPLICATION OF THE PROPOSED METHOD ON VITAMIN B1 IN URINE SAMPLES

CONCLUSION: A simple, spectrophotometric method has been proposed for the determination of trace amount of Thiamine HCl in aqueous solution and pharmaceutical preparations based on the diazotiziation reaction and coupling with Procaine HCl at room temperature, for the determination of vitamin B1 in blood and urine sample. The results shows that the concentration of vitamin B1 were decreased with time after taken a therapy and that typical with the results of pharmacopeia of vitamin B1 in human body.

The proposed method has some advantages like the fast determination of the drug on its pure form and in pharmaceutical preparations also it did not require temperature control, solvent extraction and expensive reagents and solvents.

ACKNOWLEDGMENT: The authors would like to express sincere gratitude to the staff of the Department of Chemistry, Faculty of Science, University of Baghdad for technical support specially Miss Munira Khaled, Ahmed Jaffer and Monkth Abd Alkareem.

CONFLICT OF INTRESTS: The authors declare that they have no conflict of interests.