ABSTRACT: A simple, sensitive, cost-effective spectrophotometric method has been developed and validated for the determination of Ambroxol hydrochloride (AMB), in bulk drug and its pharmaceutical formulations. The method is based on the formation of a Schiff base with PDAB; the reaction of drug with reagent gives a bright yellow color. The so formed colored species absorbance was measured at its absorption maximum (λmax) 423 nm. Beer’s law has been obeyed in the concentration range 5-30 µg/ml. The optical parameters were calculated as 2.0702 × 104 (L/mol/cm), 0.0183 (µg/cm2), molar absorptivity and Sandell sensitivity respectively. The LOD and LOQ of the proposed method were calculated 0.0844 (μg/ml), 0.2812 (μg/ml), respectively. All the variables were studied to optimize the reaction conditions. No interference was observed in the presence of common pharmaceutical excipients. The validity of the method was tested by analyzing AMB in its pharmaceutical formulations and critically tested for its accuracy by statistical tests. Good recoveries were obtained by the developed method; the obtained results were critically analyzed and successfully employed for the determination of AMB in its pharmaceutical dosage forms.

INTRODUCTION: Chemically Ambroxol hydro- chloride (AMB) is [trans-(2-amino-3, 5-dibromobenzylamino) cyclohexanol hydrochloride] Fig. 1, a metabolite of bromhexine, as hydro-chloride, is used as a bronchosecretolytic and expectorant drug 1. It has also been reported to have a cough suppressing effect and anti-inflammatory action.

Recently, the inhibition of nitric oxide-dependent activation of soluble guanylate cyclase was suggested as one of the molecular mechanism of the therapeutic action AMB, also used in pulmonary alveolar proteinosis in pulmonary distress and infant respiratory distress syndrome 2, 3. It can be administered as a hydrochloric salt in daily doses of 30–120 mg using mostly oral formulations like tablets and syrups 4.

The extensive literature survey reveals that there are several spectrophotometric methods have been reported for the qualitative and quantitative determination of AMB in pharmaceutical formulations 5-9. Various HPLC 10-14, GLC 15, 16, LC-MS/MS 17, 18 and electroanalytical 19 methods are also reported for its determination in biological fluids.

In the present research work, an effort has been made to develop and validate a simple spectrophotometric determination of AMB in bulk and pharmaceutical formulations. Although, there are several highly sophisticated instrumental methods were reported but are suffered by the time of analysis, cost per analysis, sophistication, and most importantly, the skilled analyst to handle the instruments. The present method offers a simple, sensitive, cost-effective method for the determination of AMB in any common QC laboratory.

Materials and Reagents: All the chemicals used were of analytical grade. All the solutions were prepared freshly, and deionized water is used throughout the experiment. Ambroxol hydrochloride bulk drug obtained from Sun Pharmaceutical (Mumbai, India) certified to contain 99.7% of the active ingredient, which has been used as a reference substance, as received without further purifications.

Preparation of 5% (w/v) PDAB Solution: Accurately weighed 5 g of PDAB in a 100 ml volumetric flask, added 20 ml of methanol swirled to mix then the solution made up to the mark with methanol.

Preparation of Standard Stock Solution: Weighed accurately near (0.001g) 10 mg of the reference standard in a 10 ml volumetric flask; added 5 ml deionized water swirled to mix and brought to the mark with deionized water. The apparent concentration has been reached to 1000 µg/ml. Further stepwise dilutions were made to obtain the working standard stock solution 100 µg/ml.

General Procedure for the Determination of Ambroxol Hydrochloride: Variable aliquots of working standard solution containing 5-30 μg/ml of AMB were transferred into series 10 ml volumetric flasks. To each flask 2 ml of concentrated HCl was added, mixed the solution mechanically and then added 2 ml of 5% PDAB solution then the flasks are heated on a water bath for 10 min. There is a formation of yellow colored Schiff base, then the flasks are allowed to cool to room temperature, and the solutions made up to the mark with water. The colored species absorbance was measured at 423 nm using reagent as a blank. The formation of the Schiff base is shown in Scheme 1. The calibration graph was prepared by plotting absorbance versus concentration of drug, and the concentration of unknown was read from the calibration graph or computed from the regression equation derived from Beer’s law data.

The same procedure was followed for the determination of AMB in the tablet formulations, and the content of the tablets was calculated by using the regression equation. 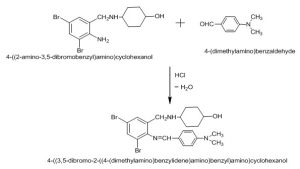 Determination of Absorption Maxima (λmax): To determine the λmax of the colored species, 1 ml of 100 μg/ml of the AMB was added to a 10 ml volumetric flask and 2 ml of concentrated HCl, mixed the contents mechanically then added 2 ml of 5% PDAB solution then the flasks are heated on a water bath for 10 min. There is a formation of yellow colored Schiff base, then the flasks are allowed to cool to room temperature, and the solutions made up to the mark with water.

The colored species was measured against reagent blank in the range of 400 nm to 800 nm. The λmax of the complex was found to be 423 nm. The absorption spectrum of the proposed method was shown in Fig. 2. Under the experimental conditions, each reagent blank showed a negligible absorbance at the corresponding λmax. 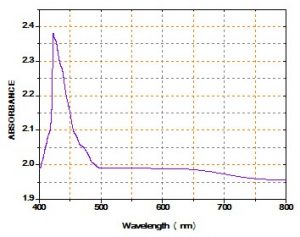 Effect of Heating Time: To study the effect of heating time for the development of maximum color, the contents of the mixture were heated for up to 30 min. at 100 ± 1°C. The intensity of the color developed was measured at room temperature after the dilution to 10 ml with deionized water. It is apparent from the investigation that the maximum intensity of color was obtained after 10 min of heating and remained constant. Therefore the optimum heating time was fixed to 10 min.

Interference Studies: To study the potential interference from the commonly used excipients and other additives such as glucose, lactose, starch, sodium starch glycolate, cellulose, magnesium stearate, and ascorbic acid recovery studies were carried out. Under the experimental conditions employed, to a known amount of drug. The recovery studies suggest that there was no significant interference from the excipients on the assay of the drug.

Quantification: The optical characteristics such as Beer’s law limits, Sandell sensitivity, and molar absorptivity were calculated for the proposed method, and the results are summarized in Table 1. Regression analysis of the Beer’s law plot at their λmax revealed a good correlation, as shown in Fig. 3. For the regression analysis, we have selected different concentration sets, but the best fit curve was obtained in the concentration range 5 to 30 μg/ml of standard AMB. For the verification of Beer’s law, we have taken a series of 10 ml volumetric flasks and added the standard working solution (100 μg/ml) serially from 0.5 ml to 3.0 ml followed by added all the reagents as mentioned in the assay procedure. Graph of absorbance versus concentration plotted and are described by the regression equation Y= bx+a (where ‘Y’ is the absorbance, ‘b’ is the slope, ‘x’ is the concentration of the drug in μg/ml and ‘a’ is the intercept) obtained by least squares method. The results were summarized in Table 1. 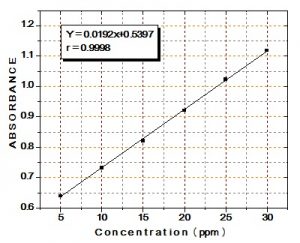 TABLE 1: OPTICAL AND REGRESSION CHARACTERISTICS, PRECISION AND ACCURACY OF THE PROPOSED METHOD

TABLE 2: EVALUATION OF THE ACCURACY AND PRECISION OF THE PROPOSED METHOD BY INTRA-DAY ASSAY

The accuracy of the proposed method was further checked by performing recovery experiments through the standard addition technique. For this purpose, a known amount of pure AMB was added to pre-analyzed dosage forms and then determined by the recommended procedure. The results are as shown in Table 3. The values of mean recovery and relative standard deviation (% RSD) were in the range of 99.99-100.0% and 0.032-0.033% respectively. This indicates the reproducibility of the method. No interference was observed from the common excipients of the tablet.

Applicability of the Method: The proposed method applied to the analysis of AMB in pharmaceutical dosage forms, and the results were statistically compared with the reference method by calculating the student’s t-values.

The evaluated t-values were less than the tabulated values at the 95% confidence level for five degrees of freedom, as revealed by the results compiled in Table 4. This suggests that the proposed method is accurate and precise as the reference method.

CONCLUSION: The proposed method was quite simple and did not require any pre-treatment of the drug and tedious extraction procedure. The method has a wider range with good accuracy and precision. Hence, the data presented in the manuscript demonstrate that the proposed method was accurate, precise, linear, selective and offers advantages of reagent availability and stability, less time consumption, and highly sensitive. Thus, it can be extended for routine analysis of AMB in pharmaceutical industries and hospitals and research laboratories. Unlike the LC/MS procedure and HPLC procedures, the UV-Visible Spectro-photometer instrument is simple and not of highly expensive on the other hand in simplicity, and user-friendly the method could be considered superior in comparison with the previously reported methods. Moreover, the method is free from interferences by common additives and excipients.

ACKNOWLEDGEMENT: The authors are grateful to Sun Pharmaceuticals India Ltd. Mumbai for providing gift sample of reference grade AMB and also the Chairman of the Department of Chemistry, Gulbarga University, Gulbarga; for providing all facilities, support, and encouragement to carry out the study.