ABSTRACT: An accurate, precise and reproducible UV-spectro-photometric methods and liquid chromatographic assay method were developed and validated for the determination of Levofloxacin and Ornidazole in tablet dosage form. Spectrophotometric estimation was done by simultaneous equation method and 50% methanol as solvent. In this method λmax for LEVO and OZ were selected at 293.5nm and 318nm. RP-HPLC analysis was carried out using Prontosil C-18 column (4.6 x 250mm, 5μ particle size) and mobile phase composed of Acetonitrile : 0.05% Ortho-phosphoric acid in water pH 3.0 (45:55% v/v)at a flow rate of 1.0 ml/min and chromatogram was recorded at 303 nm. Linearity was evaluated over the concentration range of 4 -20 μg/ml and 8-40μg/mL for LEVO and OZ in  both UV spectrophotometric and RP-HPLC method (the value of r2= 0.999 found were by both the methods for LEVO and OZ). The developed methods were validated according to ICH guidelines and values of accuracy, precision and other statistical analysis were found to be in good accordance with the prescribed values therefore the both methods can be used for routine monitoring of LEVO and OZ in industry in the assay of bulk drug and tablets.

INTRODUCTION: Levofloxacin hemihydrates (LEVO) chemically (-)-(S)-9-fluoro2,3-dihydro-3-methyl-10-(4-methyl-1-piperazinyl)-7-oxo-7H-pyrido[1,2,3-de]-1,4benzoxazine-6-carboxylic acid hemihydrate (Fig. 1A.), is a fluoroquinolone antimicrobials, is the active S-isomer isolated from the racemic ofloxacin 1-2. Ornidazole (OZ) chemically; 1-chloro-3-(2-methyl-5-nitro-1H-irnidazole-1-yl) propane-2-ol (Fig. 1B.), is a 5-nitroimidazole derivative used as an anti-infective agent 1, 2.

Levofloxacin hemihydrate is official in IP 3. Numerous HPLC 4-10, UV 11 and HILIC⁄MS⁄MS 12 has been used to determine drugs in biological fluids.

Ornidazole is official in IP 3 and USP 13. The assay procedure mentioned in these pharmacopoeias uses non-aqueous titration for estimation of ornidazole. A literature survey reveals that ornidazole is estimated by glassy carbon electrode 14, UV 15 method,HPLC 16 method, LC-MS 17 method and calorimetry 18 method in solid dosage form and in biological fluids.

Some spectrophotometric 19, 20, HPLC 21 and HPTLC 22 methods have been reported for their simultaneous estimation with ofloxacin in the tablet dosage form. 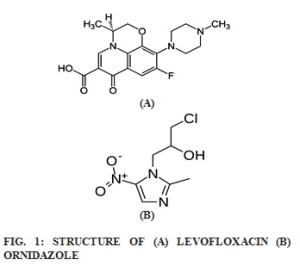 FIG. 1: STRUCTURE OF (A) LEVOFLOXACIN (B) ORNIDAZOLE

Milli-Q was used to prepare water used in UV spectroscopy and RP-HPLC method.

For HPLC method, the standard solutions were prepared by dilution of aliquots of the standard stock solution (1000 µg/ml) with diluents to reach the linearity range of 4-20µg/ml for LEVO and 8-40 µg/ml for OZ. The chromatogram was recorded at 303 nm Fig. 5A and 5B.

The peak areas were plotted against the corresponding concentrations to obtain the calibration graph Fig. 6, Fig. 7. The result of their optical characteristics and linearity data of both drugs has been reported in the Table 1. 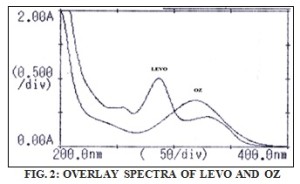 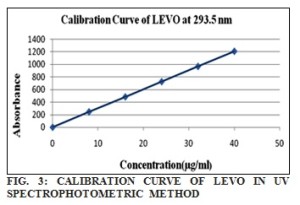 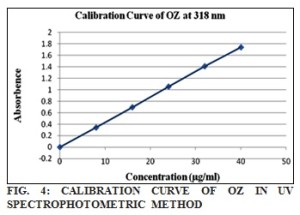 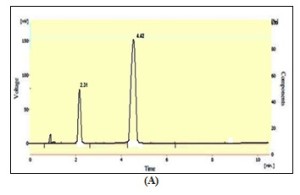 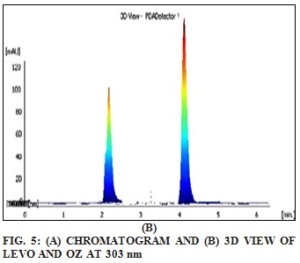 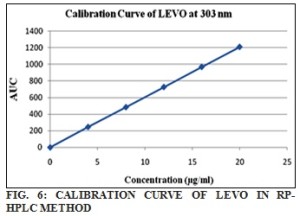 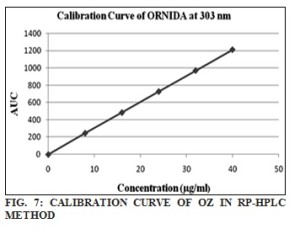 TABLE 1: OPTICAL CHARACTERISTICS AND LINEARITY DATA OF LEVO AND OZ

Study of overlay spectra of drugs and selection of method: The spectra exhibit major absorbance maxima at 293.5 nm and 318 nm for LEVO and OZ respectively and isobestic point at 303 nm (Fig. 2). Due to difference in absorbance maxima and having no interference with each other so both drug can be simultaneously estimated by simultaneous equation method

Vierordt’s simultaneous equation method (Method A): The wavelength 293.5 nm (λmax of LEVO) and 318 nm (λmax of OZ) was selected. The absorbencies of LEVO and OZ were measured at 293.5 nm and 318 nm. This method of analysis is based on the absorption of drugs X and Y at the wavelength maxima of the other. The quantification analysis of LEVO and OZ in a binary mixture was performed by using Eqn-1 and Eqn-2. Where CX and CY are the concentrations of LEVO and OZ respectively in the diluted sample, ax1 and ax2 are absorptivities of LEVO at λ1 and λ2, ay1 and ay2 are absorptivities of OZ at λ1 and λ2 respectively Table 2.

Analysis of Marketed Formulation: Twenty marketed tablets of LEVO and OZ (LOVOLKEMTM-OZ,Alkem Lab.Ltd, Mumbai) were weighed and ground to a fine powder; amount equal to 25 mg of LEVO was taken in 100-ml volumetric flask. The OZ present in this amount of tablet powder was 50 mg; the ratio of all these drugs was 1:2. This was than dissolve in 25 ml of diluents by sonication for about 10 minutes. The volume is made up to the mark by diluents as per the UV Spectrophotometry method and RP-HPLC method and filtered by Whatmann filter paper (no.41) and the filtrate was used to prepare samples of different concentration. The statistical evaluation of tablet analysis by both methods has reported in Table 4.

Validation Parameters: The optimized spectrophotometric and chromatographic methods were completely validated according to the procedure described in ICH guidelines Q2 (R1) for validation of analytical methods (Linearity, Accuracy, Precision and Robustness) 24.

Linearity: Linearity was studied by analyzing five standard solutions (n = 5) covering the range of 4-20 μg/ml and 8-40 μg/ml for LEVO and OZ respectively in both UV spectrophotometric and HPLC method. Calibration curves with concentration verses absorbance or peak area was plotted for each method and the obtained data were subjected to regression analysis using the least squares method. Linearity of LEVO and OZ was established by response ratios of drug. Response ratio of both drugs was calculated by dividing the absorbance or peak area with respective concentration Table 5.

Precision: Precision of the methods was studied at three levels as at repeatability, intermediate precision (Day to Day and analyst to analyst) and reproducibility Table 7.

*Average of 5 replicate and 5 concentration.

LOD AND LOQ: Detection limit and Quantitation limit of described method were observed as 0.124µg/ml and 0.375µg/ml for LEVO and 0.122 µg/ml and 0.3702µg/ml for OZ Respectively in UV Spectrophotometric method and RP-HPLC method, based on the SD of response and slope, which meet the requirement of new method.

RESULTS AND DISCUSSIONS: The aim of the present work was to develop simple and reproducible UV-spectrophotometric and RP-HPLC method for the simultaneous determination of LEVO and OZ in solid pharmaceutical dosage forms. As the solubility of LEVO and OZ was sparingly soluble in water therefore mixture of methanol and water used (1:1, v/v) for spectrophotometry as solvent for preparation of all standard and sample solutions as easily available and cost effective, The mixture of acetonitrile and ortho-phosphoric acid in water pH 3.0 (45:55, v/v) used, which improved resolution and peak shape.

UV-Spectrophotometric Method: Based on the solubility and stability and spectral characteristics of the drugs, methanol and water used (1:1, v/v) for spectrophotometry as solvent. LEVO and OZ were show maximum absorbances at 293.5 and 318 nm respectively. LEVO and OZ follows the Beer’s law in the concentration range of 4-20 µg/ml and 8-40 µg/ml respectively (r2= 0.999 and 0.9998). Simultaneous equation method employs 293.5 and 318 nm as two analytical wavelengths, the optimized methods showed good reproducibility and recovery with ranging from 98.32 to 99.28 for LEVO and 98.47 to 98.65 for OZ. The mean percent label claims of tablet dosage by spectrophotometric method were found to be 99.6±0.426and 98.78±1.032 for LEVO and OZ respectively.

The standard deviation, coefficient of variance and standard error were obtained for LEVO and OZ was satisfactorily low. Result of precision at different level were found be within acceptable limits (RSD<2).

RP-HPLC Method: Several attempts were performed in order to get satisfactory resolution of LEVO and OZ in different mobile phases with various ratios mixture of organic phases and buffers by using C18 column. Initially the mobile phase used was mixture of water and methanol followed by water and acetonitrile in different ratios. The mobile phase used was acetonitrile-ammonium acetate buffer (pH 5.5) in the ratio (60:40, v/v) by isocratic elution could not give satisfactory resolution. Further acetonitrile and ortho-phosphoric acid in water (pH 3.0) in ratio of (45:55, v/v) mobile phase was used by isocratic elution shown satisfactory and good resolution at a flow rate of 1.0 mL/min.

The mean percent label claims of tablet dosage by RP-HPLC method were found to be 98.56±0.699 and 99.89±1.407for LEVO and OZ Respectively. The standard deviation, coefficient of variance and standard error were obtained for LEVO and OZ was satisfactorily low. Result of precision at different level were found be within acceptable limits (RSD<2).

CONCLUSION: In conclusion, a RP- HPLC and simple reproducible UV-Spectrophotometric methods were developed and validated for the simultaneous determination of LEVO and OZ in solid dosage form. The advantage of UV method over HPLC method is that the proposed UV method does not require the elaborate treatment and procedures usually associated with chromatographic method. It is less time consuming and economical. A statistical comparison of the quantitative determination of LEVO and OZ shows that HPLC method as more accurate and precise than UV method.

The results indicate HPLC and UV Spectrophotometry methods are adequate methods to quantify LEVO and OZ in pure form and its dosage form. There was no interference by excipients in the tablets and the mobile phase is easy to prepare. Since these methods are simple, specific, rapid, precise and accurate, they may be successfully and conveniently adopted for routine quality control analysis of LEVO and OZ in bulk and pharmaceutical dosage form.

ACKNOWLEDGMENT: The authors are thankful to Intas Laboratories Pvt. Ltd. and GSK Ltd. Mumbai providing gift samples along with their analytical reports.