ABSTRACT: The complexes of Cu(II) and Ni(II) having the general composition ML2X2 (where L= 2-benzoylpyridine thiosemicarbazone, M=Ni(II),Cu(II), and X=Cl-, NO3-,SO42-, OAc-)  have been synthesised and were characterised by IR, elemental analysis, magnetic susceptibility, UV-Vis, conductivity, mass spectrometry and EPR spectral studies. The IR spectral data indicates that the ligand behave as a bidentate ligand and coordinated to the metal ion through its nitrogen and sulphur donor atoms. The ligand is highly soluble in water. On the basis of molar conductance value which was determined by using DMSO as solvent it can be concluded that all the complexes were non electrolytic in nature.   The value of magnetic moment indicates that all the complexes are of high spin type. On the basis of spectral studies an octahedral geometry has been proposed for Ni(II) complexes while tetragonal geometry was proposed for Cu(II) complexes.

INTRODUCTION: Through the years Schiff’s base ligands and their transition metal complexes fascinates the scientist for their immense important biological activities including antitumour, antibacterial, antifungal, anticarcinogenic properties 1-5. The presence of nitrogen and sulphur donor atoms in ligand enables them to coordinates with metal ions 6 and forms a series of complexes which are studied not only for their biological activities but they are also studied for their potential in therapeutic uses 7.

Transition metal complexes are widely used for the construction of molecular material which are well known for their conducting and magnetic properties and can be applied in material chemistry, supramolecular and biochemistry 8-11.

Metal complexes of thiosemicarbazone were found to possess pronounced anticarcinogenic properties against a wide range of transplanted neoplasm 12. Nickel complexes are well known for their anticarcinogenic, antibacterial and antifungal properties 13.  Copper complexes also have their importance not only in development and performance of cardiovascular and nervous system but also in development and performance of immune and reproductive system 14. In this paper we report the synthesis and characterization of copper(II) and nickel(II) complexes with above mentioned ligand (Fig.1)

Experimental Section: All reagents were commercially available and used without further purification purchased from sigma Aldrich and metal salts were purchased from E. Merck. Solvents were spectroscopic pure from SRL/BDH.

Preparation of ligand: Thiosemicarbazide (0.91g, 0.01mol) was dissolved in minimum quantity of ethanol. To this solution hot ethanolic solution of 2-benzoylpyridine was added very slowly with constant stirring. The resulting solution was refluxed at 78-80ºC for 8hrs.and the pH was adjusted to approximately 4-5 by using acetic acid. On cooling bright yellow coloured crystals were separate out. These crystals were washed out several times with cold ethanol. The ligand is highly soluble in water.

Preparation of transition metal complexes: Hot aqueous solution (20 ml) of corresponding metal salts (0.01mol) were mixed with hot aqueous solution of the ligand (0.01mol) with constant stirring and refluxed for 7-8 hrs. at 65-70oC. On cooling the contents, the coloured precipitates were separated out in each case. It was filtered, washed with ethanol and ether. The resultant mixture was dried over P4O10.

The EPR spectra were recorded in solid as polycrystalline sample at room temperature on E4-EPR spectrometer using DPPH as g marker.

RESULT AND DISCUSSION: All the nickel and copper complexes were synthesised by condensation reaction between ligand and corresponding metal salts. For Ni(II) and Cu(II) complexes were synthesised at 6-7pH range. The synthesised complexes were coloured and stable at room temperature and were found soluble in DMSO and DMF. The molar conductivity value lies in the range from 3.6-11.8 (ohm-1 cm2 mol-1) which indicates their non electrolytic nature and indicates that complexes have stoichiometry of the type [ML2X2] where M = Cu(II), Ni(II), L= ligand and X= Cl-, NO3-,SO42-,and OAc- which is further supported by elemental analysis values. The physical and analytical data together of synthesised complexes is listed in Table 1.

1H NMR of ligand: 1H NMR of ligand was done in DMSO on 44-300 MHz NMR (Fig.1a). The aromatic proton appears as set of singlet, doublet and multiplet in the range 7.40-8.78ppm. The singlet for NH proton appears at 9.32ppm while two NH2 protons resonates as a multiplet at 7.34-7.38 ppm. The NH2 and NH protons are confirmed by their D2O spectra. All the protons are found in their expected region.

FIG. 1b: MASS SPECTRUM OF LIGAND

IR Spectra: In IR spectra of ligand a band at 1608 cm-1 corresponds to v(C=N)azomethine group. On complex formation (Fig. 2a and 2b) position of this band is shifted towards lower side which shows the coordination of azomethine group. This is further supported by appearance of new band in the region from 414- 432 for v(M-N). A band appeared at 781 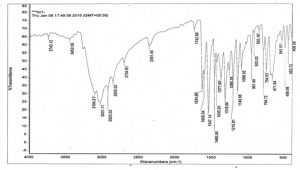 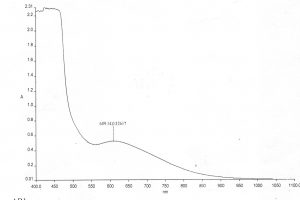 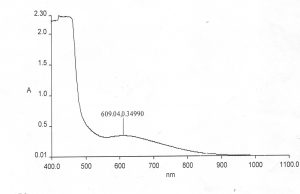 FIG. 4a: EPR SPECTRUM OF COPPER 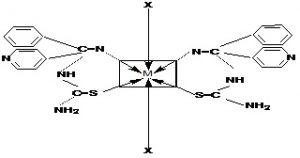 CONCLUSION: The synthesised ligands and complexes were characterised by elemental analysis, IR spectroscopy, mass spectroscopy, UV-Vis, 1H NMR spectroscopy and EPR spectral studies. The proposed study of complexes indicates octahedral geometry for nickel complexes and tetragonal geometry for copper complexes. Ligand was found to be bidentate which coordinates to metal through azomethine group as v(C=N) and through sulphur as v(C=S) group.