INTRODUCTION:The conventional tableting method used involves first making granules and then compressing into tablets by way of direct (granule) tableting, but the need in recent years for process validation, GMP and automation of production processes has focused renewal of attention on the direct tableting, which involves few steps.

The direct compression is a modern technique in the tablet manufacturing, many processing steps are limited in direct compression and also wet granulation cannot be used with sensitive drugs 1. Spherical agglomeration is a modern technique for development of directly compressible drugs where the drug crystals are converted to spherical form to improve flowability, compressibility, packability and to enhance dissolution rate characteristics of poorly water insoluble drug.

Also direct tableting of pharmaceutical drugs is desirable to reduce the cost of production 2.

This technique as the name indicates, provides crystalline agglomerates which are spherical in shape, which exhibit excellent micromeritic properties of many drugs such as fenbrufen 5, ibuprofen 6, furosemide 7, indomethacin 8, aminophylline 9, enoxacin 10, tolbutamide 11, sulphamethoxazole 12, phenytoin 13 and norfloxacin 14.

Non-steroidal anti-inflammatory drugs are the most frequently prescribed preparations, Zaltoprofen is a novel NSAID drug exhibit poor flow and compression characteristics and hence it is a suitable candidate for spherical crystallization process to improve flow properties and compressibility. Further, Zaltoprofen shows incomplete and poor oral bioavailabilty due to low aqueous solubility 15, hence, in such case it is a valuable goal to improve therapeutic efficacy.

In the present study, it was planned to prepare spherical crystals of Zaltoprofen to increase the aqueous solubility, dissolution rate and bioavailability besides improving it micromeritic properties using PEG-6000 which is hydrophilic polymer 16.

Preparation of Zaltoprofen Spherical Agglomerates: Spherical agglomeration of Zaltoprofen was prepared by simple agglomeration technique using three solvent systems. It involved a good solvent, a bad solvent and a bridging liquid. Acetone, dichloromethane and water were selected as good solvent, bridging liquid and poor solvent. These solvents were successfully used in previous studies.

A solution of Zaltoprofen (500 mg) in acetone (3 ml) was added to a solution of PEG 6000 (1-4% w/v) in 100 ml distilled water. The mixture was stirred continuously using digital mechanical stirrer (IKA motors. Mumbai) at 500 rpm, the bridging liquid (Dichloromethane; 0.5 ml) was added drop wise (table 1) and stirring was continued for 30 min.

The agglomerates were separated by filtration using Whatman filter paper (No. 1) and dried for 24 hours at room temperature.

The computed values for the different batches of crystals were expressed in percent and tabulated.

Porosity is frequently expressed in percent. Porosity values were computed for all batches using the formula.

Five replicate determinations were made in similar conditions of relative humidity and mean angle of repose values were calculated.

RESULTS AND DISCUSSION: Spherical Agglomerates of Zaltoprofen were prepared by simple spherical agglomeration, which involves a good solvent, a poor solvent and bridging liquid. From the solubility data of Zaltoprofen, the solvents are selected since Zaltoprofen is highly soluble in acetone, insoluble in water, acetone selected as good solvent, water as poor solvent and dichloromethane as bridging liquid as the dichloromethane has good wettability with the drug and immiscible with the water. The percentage of drug content of the prepared agglomerates showed between 93% to 97% shown in Table 2.

TABLE 3: MICROMERITIC   PROPERTIES  OF  ZALTOPROFEN  SPHERICAL  CRYSTALS  PREPARED IN THE  PRESENCE  OF DIFFERENT  CONCENTRATIONS  OF  PEG-6000  AND  PURE DRUG

Scanning Electron Microscopy: The results of surface morphology studies were shown in SEM Fig. 1.  The parent zaltoprofen crystals were in the form of fine needles, which is in confirmation with the earlier report. This long-needle form of zaltoprofen leads to very poor flow and compressional difficulties. The prepared agglomerates were spherical to larger extent and remaining was irregular in shape with smooth surface, which enabled them flow very easily.

FTIR Spectroscopy: IR spectroscopy and DSC studied the possible interaction between the drug and the carrier. The interaction often leads to identifiable changes in the IR profile and melting point of drug. The principal IR peaks of pure zaltoprofen and IR peaks of spherical agglomerates were shown in Table 4, Figure 2 (A), (B). No considerable changes were observed in the IR peaks of crystals when compared to pure zaltoprofen. These observations indicate the absence of well-defined interaction between zaltoprofen, PEG 6000 and other additives used in the crystals. 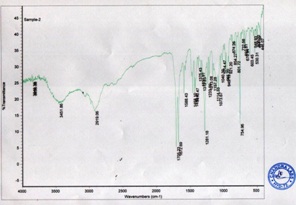 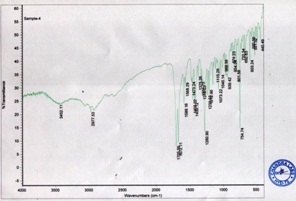 FIG. 2: IR SPECTRA OF A) ZALTOPROFEN B) SPHERICAL AGGLOMERATES F4.

Differential Scanning Calorimetry Studies: The DSC thermograms of pure zaltoprofen and its crystal forms were shown in Fig. 3 (A), (B). Pure zaltoprofen showed a sharp endotherm at 140.81°C corresponding to its melting point. Zaltoprofen spherical crystals showed sharp endotherm at 139.3oC. There was negligible change in the melting endotherms of the spherical crystals compared to pure drug. This observation further supports the IR spectroscopy results, which indicated the absence of any interactions between drug, PEG 6000 and additives used in the preparation. However, there was a decrease, although very little, in the melting point of drug in spherical crystals compared to that of pure zaltoprofen.

FTIR spectra and DSC studies of agglomerates showed that, the drug was stable in the prepared formulations indicating the absence of interaction between zaltoprofen and hydrophilic polymers. 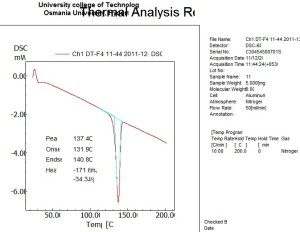 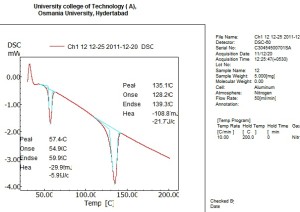 FIG. 3 DSC PATTERNS OF; A) ZALTOPROFEN; B) SPHERICAL AGGLOMERATE F4 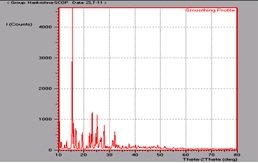 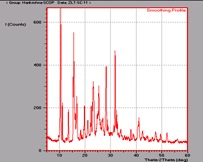 The main factor in the improvement of flowability and packability was due to their spherical shapes and smooth surfaces. The agglomerates have shown improved in-vitro drug release performance comparable with untreated zaltoprofen. Therefore, from the above it can be concluded that spherical crystallization is a tool of particle engineering, which can transform the poorly flowable drug powder into spherical crystals, those are best suited for direct compression. The conversion of poorly flowable powder into spherical agglomerates enhances the speed of tableting because of elimination of most of steps, which required in the wet granulation and in dry granulation process.