ABSTRACT: Sustained released Aceclofenac microcapsules based on synthetic hydrophilic polymer hydroxypropyl methylcellulose (HPMC) were developed in this study in an attempt to design a dosage form that would manifest desirable release profile. W/O emulsion solvent evaporation technique was employed. Various release retarding agents were used to provide the analgesic and anti-inflammatory action of aceclofenac for prolong period of time. Microcapsules were prepared at a fixed stirring rate of 1000 rpm. Polymeric solution containing aceclofenac was emulsified by light liquid paraffin (LLP) which was initially emulsified by 1% (w/w of the continuum) lipophilic surfactant Span 80. The formulated microcapsules were evaluated for drug-polymer drug loading efficiency, micromeritic properties, surface morphology study, in-vitro drug release kinetics. It was found that all formulations showed satisfactory flow behavior. The maximum loading efficiency of was found to be 87.42%. SEM study showed that the microcapsules were discrete and spherical shaped. Efficacy of the dosage forms were evaluated in terms of in-vitro dissolution studies which showed statistically significant difference among the drug release profile from different polymeric blend as well as their increasing concentration. However, by increasing the polymer concentration, the rate of drug release from the microcapsules decreases dramatically. Drug release from all formulations followed Korsemeyer-Peppas kinetics and release mechanisms followed non-Fickian or anomalous type release

INTRODUCTION:Aceclofenac, is a non-steroidal anti-inflammatory drug (NSAID) used extensively in the treatment of rheumatoid arthritis, osteoarthritis and ankylosing spondylitis. It is an effective analgesic and anti-inflammatory agent with a good tolerability profile.

Through its analgesic and anti-inflammatory properties, Aceclofenac provides symptomatic relief in a variety of painful conditions.

Aceclofenac is a newer derivative of diclofenac having less gastrointestinal complication which acts by blocking the action of cyclo-oxygenase, which is produced by prostaglandins. The usual therapeutic dose and dosing frequency of conventional Aceclofenac tablets is high (100 mg twice daily), because of the short biological half-life of the drug (3-4 h); makes it an ideal candidate for modified release dosage forms.

To reduce the frequency of administrations and to improve patient compliances, once-daily sustained release dosage forms of Aceclofenac is desirable 1.

The development of sustained release dosage forms through microspheres has received more attention, now days. Some of the advantages of controlled release microspheres as drug delivery devices include reduced dosage, decrease in systemic side effects, reduced frequency of administration, and, therefore, increased patient compliance 2.

Microspheres are one of the multiparticulate drug delivery systems prepared to obtain prolonged and controlled drug delivery, to improve bioavailability or stability and to target specific sites. Microspheres can be defined a solid, approximately spherical particles ranging from 1 to 1000 µm, containing dispersed drug in either as solution or as microcrystalline form 3, 4.

The commonly employed methods for the preparations of microspheres are, emulsion solvent evaporation method 5, phase-separation method and spray drying method 6. The choice of the method depends on many factors such as the drug solubility, partition co-efficiency, polymer composition, molecular weight etc. For instance, emulsion solvent evaporation technique may be a method of choice for the preparation of microspheres of water insoluble drugs 7, 8.

In the emulsion solvent evaporation method, the water insoluble drug and polymer are dissolved in an organic phase, emulsified to form W/O emulsion, evaporated the organic phase and the microspheres so formed are filtered and dried.

Since, Aceclofenac is a water insoluble drug; emulsion solvent evaporation technique is selected for the preparation of sustained release microspheres.

The focal objective of this experiment was to investigate the possibility of obtaining sustained release formulation of Aceclofenac microcapsules by emulsion solvent evaporation technique.

The prepared microcapsules were evaluated for various physicochemical properties and in-vitro release rates from these formulations.

Identification: The sample Aceclofenac was examined by Fourier Transform Infrared (FTIR) spectroscopic analysis and compared the spectrum with the reference standard FTIR spectrum of Aceclofenac.

Solubility analysis 1, 9: An excess quantity of Aceclofenac was added to various solvents such as 10 ml of distilled water, acetone, 0.1 N HCl, phosphate buffer pH 6.8, phosphate buffer pH 7.0 and subjected to ultrasonication for 24 hours at room temperature. The solution was then filtered through Whatmann filter and after making suitable dilutions the amount of drug dissolved in various solvents was analyzed spectrophotometrically.

Compatibility study: Compatibility of Aceclofenac with different polymeric blend was confirmed by Fourier transform infrared (FTIR) spectroscopic analysis. The spectra were recorded for pure Aceclofenac alone and Aceclofenac loaded microcapsules using FTIR to observe whether any change appear in the chemical constitution of Aceclofenac after combining it with the excipient. Samples were prepared in KBr disks (2 mg sample in 200 mg KBr). The mixtures got were taken in a diffuse reflectance sampler and FTIR spectra recorded by scanning in the wavelength region of 400 to 4000 cm−1 in a FTIR Spectrophotometer (FT-IR8400S, Shimadzu, Japan).

The internal phase of polymeric solution was prepared by dissolving polymer (according to table 1) in combination of ethanol and acetone at a ratio of 5:5 with the help of a vortex mixer (VM-2000, Digisystem Laboratory Instruments Inc., Taiwan).

Previously prepared polymeric phase was added drop wise to the external phase with continuous stirring at 1000 rpm. After 2.5 hours of stirring, hard and spherical shaped microcapsules were found.

Formulated microcapsules were then filtered and washed with cyclohexane for several times until complete removal of the oil phase from the microcapsules and allowed to dry in natural air to obtain free-flowing microcapsules. 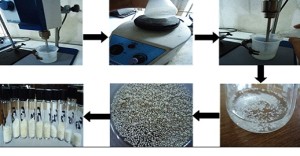 FIGURE 1: ILLUSTRATION OF STEPS INVOLVED IN PREPARATION OF ACECLOFENAC MICROCAPSULES

Quantitative analysis of Aceclofenac: Aqueous solutions of Aceclofenac (0 to 20 µg/ml) in phosphate buffer (pH 6.8) were prepared and the absorbance was measured at 274 nm by a SHIMADZU UV-VIS Spectrophotometer (UVmini-1240, Shimadzu Corporation, Japan). A linear line was obtained while absorbance values were plotted against concentrations (R2 > 0.997).

Drug loaded microcapsules of each batch were finely powdered in a glass mortar and 20 mg powder was taken in a volumetric flask. A clear solution was made using the same buffer (pH 6.8) after proper sonication (POWER SONIC 410, Hwashin Technology Co., Korea). The solution was then filtered through 0.45 µm filter and analyzed spectrophotometrically for drug content.11

Angle of Repose: Flow properties of microcapsules were studied by measuring angle of repose of the prepared formulations by employing fixed funnel method. Microcapsules were passed through the funnel, which was kept at a height ʻhʼ from the horizontal surface.

So, the passed microcapsules formed a pile of a height ʻhʼ above the horizontal surface and the radius ʻrʼ of the pile was measured and the angle of repose was determined for all formulations.

Melting point determination: The melting point of Aceclofenac was found to about 151°C, which is within reported range (149°C to 153°C) that indicates the purity of sample. 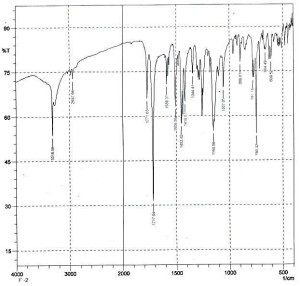 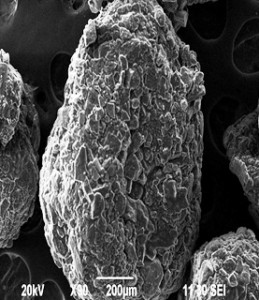 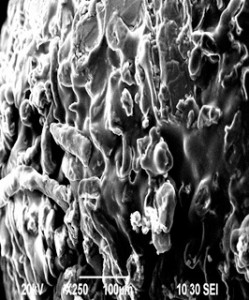 In-Vitro Release Profile: The drug release profile of all the formulations was studied in phosphate buffer (pH 6.8). The release profile for all formulations was shown in Figure 6. It is important to note that the dissolution behavior of granules and powders is greatly influenced by their wettability, surface area, and particle size distribution.15 The release of drug takes place after complete swelling of the polymer and as the amount of polymer in the formulation increase the time required to swell also increase thereby decrease in the drug release. 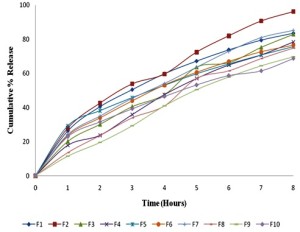 However, decrease in drug release from microcapsule formulation with the increase of polymer concentration is a common incident. This can be explained by a decreased amount of drug present close to the surface and also by the fact that the amount of uncoated drug decreases with higher polymer concentration 16, 17. The overall cumulative % release for formulations F1 to F10 were found to be 83.48%, 96.21%, 82.91%, 78.37%, 75.64%, 76.63%, 85.18%, 74.75%, 69.79% and 68.72% respectively. The drug release data obtained were extrapolated by Zero order, First order, Higuchi, Korsemeyer-Peppas equations to know the mechanism of drug release from these formulations (Table 4).18, 19 In-vitro release profiles of drug from all these formulations could be best expressed by Korsemeyer-Peppas equation, at the plots showed highest linearity (R2 = 0.982 to 0.998), where the slope value (n) ranged from 0.464 to 0.836. We know that a value of n = 0.45 indicates Fickian or case I release, 0.45 < n < 0.89 indicates non-Fickian or anomalous release, n = 0.89 indicates case II release and n > 0.89 indicates super case II release. So, the release of Aceclofenac was dominated by non-Fickian or anomalous type mechanism.

CONCLUSION: Emulsion solvent evaporation technique was found to be reproducible and may be an ideal method to prepare microcapsules of Aceclofenac. HPMC 50 cps based formulation F8 where 1:2 ratio of HPMC 50 cps and Eudragit RS-100 used, was found to be satisfactory in terms of higher drug loading efficiency (87.42%), excellent micromeritic properties (angle of repose 28.19°), 74.75% in-vitro drug release in a sustained manner with constant fashion over extended period of time 8 hours. Thus, the proposed formulation F8 can be successfully used for commercial production after an elaborate in-vivo study.