ABSTRACT: Introduction: Irbesartan is chemically 2-butyl-3-({4-[2-(2H-1,2,3,4-tetrazol-5-yl) phenyl] phenyl} methyl) -1,3-diazaspiro [4.4] non-1-en-4-one. Irbesartan is an Angiotensin II receptor antagonist effective in the treatment of Hypertension.  It is also effective in the treatment of High blood pressure.  It is also effective when used alone or in combination with other drugs. Aims and Objectives: Objective of the present study is to develop a simple, sensitive, accurate, precise and rapid first order derivative spectrophotometric method for the estimation of irbesartan in pure form. Results: For the estimation of irbesartan, solvent system employed was 50% v/v aqueous ethanol and wavelength of detection (λdet) was 237 nm. The linearity was obtained in the range 8 -18 µg/ml, with a regression coefficient, R2 = 1. Discussion: Obtained results showed that there is minimum intraday and inter day variation. The developed method was validated and recovery studies were also carried out. Sample recovery using the above method was in good agreement with their respective labeled claims, thus suggesting the validity of the method and non-interference of formulation excipients in the estimation. First order derivative spectroscopy method is simple, rapid and reproducible and further it can be used for the analysis.

Angiotensin II also acts as a vasoconstrictor in vascularsmooth muscle 1. Irbesartan, by blocking the binding of angiotensin II to the AT1 receptor, promotes vasodilation and decreases the effects of aldosterone. 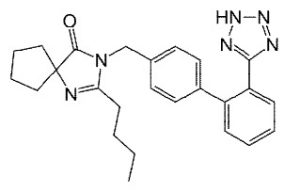 Literature review suggested several analytical methods that have been reported for the estimation of Irbesartan in bulk or pharmaceutical formulations include High Performance Liquid Chromatography, and UV - Visible Spectro- photometry.

Literature review also revealed that there is no First order Derivative Spectroscopic method: The objective of the work was to develop simple, accurate, precise and economic first order derivative Spectroscopic method to estimate the candesartan in bulk. The method should be simple, accurate, precise, reproducible and statistically valid. Thus, the objectives of project:

Preparation of stock solution: The stock solution of irbesartan is prepared by dissolving 100 mg of drug in 100 ml methanol in volumetric flask with continuous shaking; 0.08 ml of sample was withdrawn and diluted to 10 ml methanol to get 8 μg/ml of solution. The solution was than scanned in UV range between 200 - 400 nm UV-VIS Spectrophotometer, Shimadzu, Japan to determine the absorption maxima of the drug against blank as methanol.

Wavelength scanning and determination of absorption maximum: From the stock solution of Irbesartan, known concentration of 8μg/ml is prepared by suitable dilution with 50 % aqueous ethanol. Wavelength scanned for the maximum absorption of drug solution using UV-Visible spectrophotometer within the wavelength region of 200 - 400 nm against blank solvent. 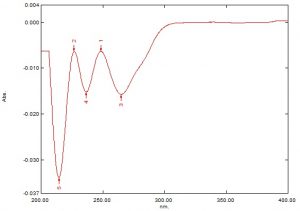 Convert the normal mode obtained spectra to first order derivative. The wavelength that shows the peak with a highest absorbance is considered as absorbance maximum of the drug. The result is presented in Fig. 2. 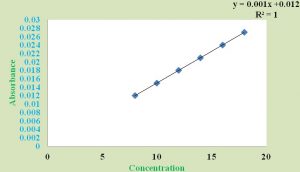 Precision: The precision of method was ascertained; the percent relative standard deviation were calculated and presented.

Inter day and intraday studies for Irbesartan analytical method: The prepared stock solution was subsequently diluted to get 14μg/ml. The resulting solution absorbance was measured at detection wavelength of 237 nm using double beam UV spectrophotometer against blank solvent. The findings was made at different time intervals in day times in a day and performed continuously for six days. Convert the normal mode obtained spectra to second order derivative. The results obtained were tabulated and studied for inter day and intraday variation. The results are tabulated in Table 2 and Table 3.

Accuracy Studies: The accuracy/recovery studies were carried out by adding a known amount of drug from the pre-analyzed tablet powder and percentage recoveries were calculated. Convert the normal mode obtained spectra to first order derivative. The reproducibility of estimation was determined by performing the tablet drug content of different samples. The results of accuracy studies were expressed in %. The result is presented in Table 4.

Assay studies: The assay studies were carried out with the help of Irbesartan tablets. The percentage purity was calculated. Convert the normal mode obtained spectra to first order derivative. The reproducibility of estimation was determined by performing the drug content of different samples. The results of assay studies were expressed in %. The result is presented in Table 5.

Acid degradation: Accurately weighed 10 mg of the drug was taken in a 10 ml volumetric flask and few drops methanol were added to dissolve the drug. The volume was made up with freshly prepared 0.1N HCl. Then this solution was kept inside a water bath maintained at a temperature of 70°C. Samples were withdrawn in regular interval of 1 hour and the absorbance were measured at the determined λdet and recorded.

Alkali degradation: Accurately weighed 10 mg of the drug was taken in a 10 ml volumetric flask and minimum amount of methanol were added to dissolve the drug. The volume was made up freshly prepared 0.1N NaOH. This solution was kept inside a water bath maintained at a temperature of 70 °C. The samples were withdrawn in regular interval of 1 hour and the absorbance were measured at the determined λdet and recorded.

Oxidation degradation: Accurately weighed 10 mg of the drug was taken in a 10 ml volumetric flask and few drops of methanol were added to dissolve the drug and the volume was made up with freshly prepared 3% H2O2. The samples were withdrawn in regular interval of 6 hour for 36 hours and absorbance were measured at the determined λdet and recorded.

Neutral conditions: The stress medium selected was distilled water. Accurately weighed 10 mg of the drug was taken in a 10 ml volumetric flask and few drops of methanol were added to dissolve the drug and the volume (Table 1).

RESULTS AND DISCUSSION: Irbesartan is a novel, potent, highly selective non peptide Angiotensin II type 1 (AT1) receptor blocker which is administered orally. It is rapidly and completely hydrolyzed to the active moiety, during absorption from the gastrointestinal tract. The physico-chemical characteristic study of Irbesartan like melting point is 180°C nearer to the literature value 182°C in previous literature. The literature survey ascertains that HPLC analytical method is developed for Irbesartan, which is cost effective. In our laboratory we developed first order derivative spectroscopic method for the analysis of irbesartan. The known concentration of irbesartan is prepared and scanned for absorption maximum. The detection wavelength according to spectra is 237 nm. Different measured D1 values at detection wavelength 237.0 nm is plotted as the curve as D1 value versus concentration. Irbesartan obeys the beer’s law in the concentration range 8-18 μg/ml. Linearity study indicates the curve is linear in the range of 8 to 18 μg/ml. The linear regression equation is Y = 0.001x +0.012 with regression coefficient, R2 = 1.

The developed method is validated for repeatability, reproducible and the accuracy and precision. In the inter day and intraday study of standard graph, the % RSD is less than 2% indicating the developed method is reproducible. The different levels of standard concentration solutions are measured for D1 value and actual concentration is calculated. The results showed that the amount recovered is 100% indicating the first order derivative spectroscopic method is accurate and precise.

CONCLUSION: The developed analytical method for Irbesartan by using first order derivative spectroscopy is found to simple, rapid and selective and the amount of drug recovered will be same as the label claimed and precise. It can be conveniently employed for the routine analysis and quantification of Irbesartan. For forced degradation study the absorbance’s in all stressed condition was decreased for repeated times and percent degradation was found out. So, the drug undergoes degradation in all stressed condition. Based on the results obtained, it is found that the proposed methods are accurate, precise, reproducible and economical and can be employed for routine quality control of Irbesartan in its pharmaceutical dosage form.

ACKNOWLEDGEMENTS: Author (Gunjan Kalyani) would sincerely thank Guide Respected Vishal S. Deshmukh Sir for being a source of inspiration during this research work. And thanks to staff & lab technicians SRIP, Kumhari for providing basic facilities in lab.