INTRODUCTION: Diltiazem hydrochloride (2S, 3S)- 5-(2- (dimethylamino) ethyl)-2- (4-methoxy phenyl)-4-oxo-2, 3, 4, 5-tetrahydro benzo [b][1,4] thiazepine-3-yl acetate hydrochloride is a calcium channel blockers indicated not only in the treatment of classical and vasospastic angina pectoris but also in the treatment of supraventricular tachyarrhythmia and essential hypertension. Diltiazem (DTZ) is metabolized by N-demethylation, O-demethylation, and deacetylation 1.

The present gap in research is the instability of metabolite during the analytical methodology. Thus, the objective of the present research work is to perform the stability study of DTZ and desacetyl diltiazem by a simple and sensitive LC-MS/MS method and study of optimization of buffer to prevent the conversion of diltiazem to desacetyl diltiazem. Although, diltiazem and its metabolites have been analyzed by HPLC 6-14 and LC-MS/MS 15-16, and other methods 17-24 these methods possess a higher range of quantification for the metabolite and insufficient stability data 25.

UPLC/MS is one of the best recent analytical techniques 26 for the characterization of the different organic molecules as reported in biologically active extracts 27, glibenclamide 28, bisphenols 29-30, resin-based dental composites 31 and extracts of Boerhaavia diffusa 32, etc.

TABLE 1: TANDEM MASS SPECTROMETRY PARAMETERS FOR DTZ AND ITS METABOLITES 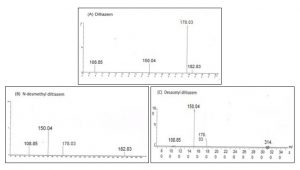 Liquid-Liquid Extraction: The mixture of plasma sample (0.5 mL) and 50 µL of diltiazem D4 (IS) working solution (2000 ng/mL) was vortexed for 60 sec in a glass tube. After the addition of 2.5 ml, methyl tert-butyl ether to the above mixture was vortexed for 10 min and centrifuged (4000 rpm) for 5 min at 4 °C. The plasma layer was flash-freeze, and the organic layer was transferred to a pre-labeled tube. The sample was evaporated to dryness at 40 °C under a stream of nitrogen. The dried extract was reconstituted with 200 µL of the mobile phase. 10 µl of the reconstituted extract was injected into the chromatographic system & analyzed. Sample processing was performed in ice-cold water, maintaining temperature 2-8 °C throughout processing.

A calibration curve was constructed from a blank sample (a plasma sample processed without the IS), a zero sample (a plasma processed with the IS) and eight non-zero sample covering the total range 0.93-250.10 ng/ml for diltiazem; 0.24-64.00 ng/ml for N-desmethyl diltiazem and 0.15-40.69 ng/ml for desacetyl diltiazem including the LLOQ. The calibration curves were generated using the analyte to IS peak area ratio by weighted (1/X2) least-squares linear regression on consecutive days. The acceptance criterion for a calibration curve was a correlation coefficient (r2) of 0.99 or better, and that each back-calculated standard concentration must be within ± 15% deviation from the nominal value except at the LLOQ, for which the maximum acceptable deviation was set at ± 20%.

The stability of the analytes and IS in human plasma under different temperature and timing condition, as well as their stability in the stock solutions, was evaluated. QC samples were subjected to short-term storage conditions (2-8 °C) to long-term storage conditions (2-8 °C) and to freeze/thaw stability studies. All the stability studies were conducted at two concentration levels 2.78 and 200.08 ng/mL for diltiazem, 0.71 and 51.20 ng/ml for N-desmethyl diltiazem and 0.45 and 32.55 ng/ml for desacetyl diltiazem, as low and high QC values with six replicates for each.

Method Development: Pharmacokinetic application requires highly selective assay method with high sample throughput capacity quantification of the drug in biological matrices. LC-MS/MS is one of the most common techniques with improved sensitivity and selectivity to achieve the desired LLOQ levels. The chromatographic conditions were optimized to achieve better resolution and symmetric peak shapes for the diltiazem and desacetyl diltiazem along with internal standard by using a mixture of ammonium formate (5 mM; pH 3.0)-methanol (10:90, v/v) as mobile phase. The diltiazem, N-desmethyl diltiazem, desacetyl diltiazem, and diltiazem D4 were eluted at 2.50, 2.48, 2.54, and 2.52 min, respectively at the flow rate of 0.6 ml/min in a run time of 4.25 min Fig. 3. Liquid-liquid extraction was used for the sample preparation, which was cost-effective. 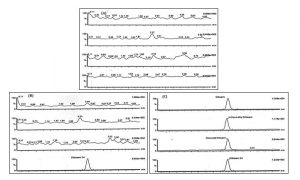 The aqueous solution of diltiazem converted into desacetyl diltiazem at room temperature due to hydrolysis. Different acid and basic solution (0.1N HCI, 1M NaOH) were used to prevent the hydrolysis of the drug and allowed to stand at (25 °C, -20 °C). 0.1 N HCl at -20 °C was optimized for preventing the hydrolysis. Hence, all aqueous solutions were also kept at -20 °C temperature. It was followed during sample separation of subject samples.

The retention behavior of IS was similar to that of the target analyte, and no significant direct interferences in the MRM channels at the relevant retention times were observed. However, in ESI, signal suppression or enhancement may occur due to co-eluting endogenous components of the sample matrix. The importance of matrix effect in any LC-MS/MS method has been reported by Matuszewski and co-workers 26. The data strongly emphasizes the need to use a blank matrix from (at least six) different sources/individuals instead of using one blank matrix pool to determine method precision and accuracy. Therefore, all validation experiments in this method were performed with matrices obtained from different individuals. Also, validation experiments were performed using hemolytic and strongly lipemic matrices. As all data falls within the guidelines, it was concluded that the degree of matrix effect was sufficiently low to produce acceptable data and the method can be considered as valid.

Selectivity: The selectivity of the method was examined by analyzing (n=6) blank human plasma extract Fig. 3A and an extract spiked only with the IS. As shown in Fig. 3B, 3C no significant direct interference in the blank plasma traces was observed from an endogenous substance in drug-free human plasma at the retention time of the diltiazem, N-desmethyl diltiazem and desacetyl diltiazem, similarly, Fig. 3B shows the absence of direct interference from the IS the MRM channel of the analyte. Fig. 3C depicts a representative ion chromatogram for the LLOQ (0.93 ng/ml) for diltiazem and (0.24 ng/ml) for N-desmethyl diltiazem and (0.15 ng/ml) for desacetyl diltiazem. Excellent sensitivity was observed for a 10-μl-injection volume; the LLOQ corresponds to on-column.

The between-batch coefficient of variance (CV) and within batch at all QC level for diltiazem, N desmethyl diltiazem and desacetyl diltiazem are presented in Table 3, 4 and 5 respectively. The CV and accuracy for the analytes met the acceptance criteria (<15%).

TABLE 3: PRECISION AND ACCURACY OF METHOD IN DETERMINING DILTIAZEM IN HUMAN PLASMA

TABLE 4: PRECISION AND ACCURACY OF METHOD IN DETERMINING N-DESMETHYL DILTIAZEM IN HUMAN PLASMA

TABLE 5: PRECISION AND ACCURACY OF METHOD IN DETERMINING DESACETYL DILTIAZEM IN HUMAN PLASMA

Stability Studies: For short-term stability determination stored plasma aliquots were thawed and kept in an ice-cold water bath (2-8 °C) for a period exceeding that expected to be encountered during routine sample preparation (around 10 h). The sample was extracted and analyzed as described above, and these results indicate reliable stability behavior under the experimental conditions of the regular analytical procedure. The stability of QC samples kept in the auto-sampler for 140 h, analytes in plasma over five freezes/thaw cycles, analytes in plasma over dry extract, and analytes in plasma on the bench for 5 h in the cold water bath was also assessed Table 6. The results indicate that solutions of diltiazem, N-desmethyl diltiazem, desacetyl diltiazem and the IS can remain in the autosampler for at least 140 h without showing significant loss in quantified values indicating that sample should be analyzed within this period time. The analytes are stable in human plasma for five freezes/thaw cycles when stored at below -70 °C and thawed in a water bath maintained at a temperature between 2-8 °C; for 120 h as a dry extract; and were also stable in human plasma.

TABLE 6: STABILITY OF DILTIAZEM AND ITS METABOLITES IN HUMAN PLASMA

These findings indicate that storage of the analytes in plasma samples at below -70 °C is adequate, and no stability-related problem would be expected during routine analyses for pharmacokinetic, bioavailability, or bioequivalence studies. The stability of the stock solutions was tested and established at room temperature for 10 h and under refrigeration (2 to 8 °C) for 14 days. The results revealed optimum stability for the prepared stock solutions throughout the periods intended for their daily use. Extensive sets of experiments up to 125 h were performed to select the best buffering solution for preventing the degradation of diltiazem to desacetyl diltiazem. It was clearly evident that diltiazem converted to desacetyl diltiazem at room temperature but we buffered plasma with 0.1% HCl (100 µl & 200 µl), 1% & 2% 0.1 M KF, 1% & 2% 0.1 M NaF at various conditions of stability like room temperature, –20 °C & -70 °C for up to 125 h, to optimize the degradation. As the peak area of diltiazem was much higher than the peak area of desacetyl diltiazem, for better comparison in a bar graph, the Y-axis was taken as multiple of 10 Fig. 4-7. 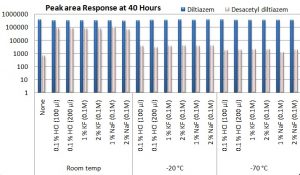 FIG. 4: EFFECT OF DIFFERENT BUFFER SOLUTIONS AND TEMPERATURE ON THE CONVERSION OF DILTIAZEM TO DESACETYL DILTIAZEM AT 40 h 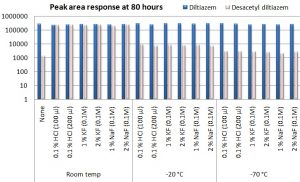 FIG. 5: EFFECT OF DIFFERENT BUFFER SOLUTIONS AND TEMPERATURE ON THE CONVERSION OF DILTIAZEM TO DESACETYL DILTIAZEM AT 80 h 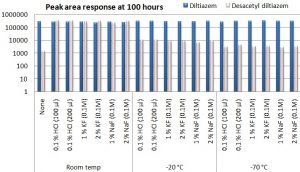 FIG. 6: EFFECT OF DIFFERENT BUFFER SOLUTIONS AND TEMPERATURE ON THE CONVERSION OF DILTIAZEM TO DESACETYL DILTIAZEM AT 100 h 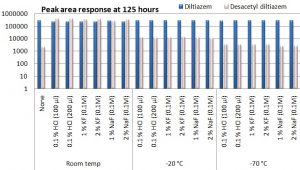 ACKNOWLEDGEMENT: The authors would like to acknowledge to the staff of Vindhya herbal team, especially to Mr. Saurabh Malviya for providing LC-MS/MS facility for the research work.

CONFLICTS OF INTEREST: None of the conflict of interest.